The "black hole" of Asia and its estranged brother to the south are revealed in books from a political refugee, an American mountain man and a war veteran. 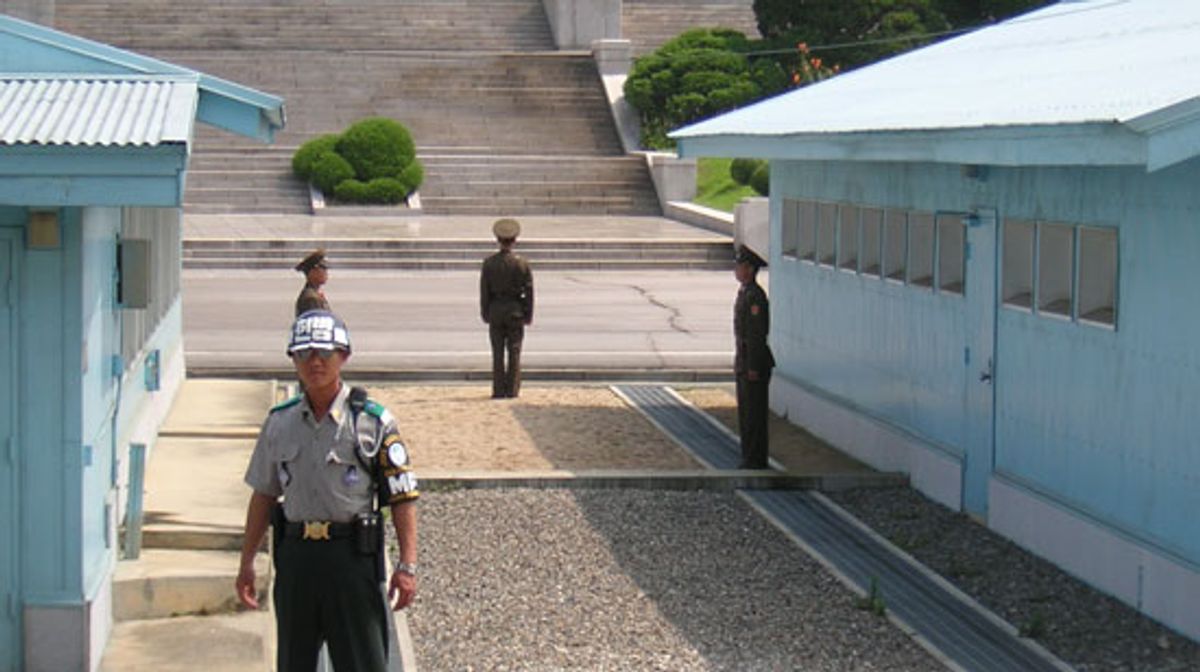 The DMZ runs across the Korean peninsula like a barbed wire belt, hiding an estimated 3 million land mines. Loosely formed during the waning days of the Korean War, the dividing line was made official during the 1953 armistice. The wire sprung up like kudzu vines and rifles haven't been put down since. Over time, the democratic capitalistic South has prospered, while the North limps along as a pariah nation led by a dictator's son who runs his fiefdom like an open-air prison.

North Korea is called the black hole of Asia. So little is known about the country that the intelligence community relies on satellite imagery and defector debriefings to create a picture of what is happening there, the world's most reclusive and repressed police state. One cannot expect much fine literature to squeak out of its closed borders, especially when famines waste the population every few years. What exists in the English language about North Korea mostly consists of outsider analysis -- scholars and journalists assembling what they can from scraps of press-trip propaganda and borderland interviews of refugees.

Yet one book stands out, since it is written by a North Korean: "The Aquariums of Pyongyang: Ten Years in the North Korean Gulag" (2001) by Kang Chol-Hwan and French journalist Pierre Rigoulot. In 1977, when Kang was 9, he was sent with his family to Yodok, a slave labor camp in South Hamgyong Province. His grandfather had been suspected of treason, and the entire family was banished.

Kang came of age in a world of starvation, exhaustion and disease where forced abortions were as common as frostbite. Informants were everywhere, and prisoners were constantly implicated in small transgressions that led to beatings or the "sweatbox," a darkened shack where the confined had to eat cockroaches and centipedes in order to survive. The most horrific punishments were public executions where fellow inmates were forced to stone the corpses of their former neighbors while crying out, "Down with the traitors of the people!"

Kang tells of how he fortified his meager diet with insects, rats and salamanders and learned to scam the gulag system in order to survive. "The only lesson I got pounded into me was about man's limitless capacity for vice -- that and the fact that social distinctions vanish in a concentration camp," he writes. "I once believed that man was different from other animals, but Yodok showed me that reality doesn't support this opinion."

When he was finally released, at age 19, he escaped first to China and then to South Korea in 1992. Shortly after his arrival, he met Pierre Rigoulot who was interviewing defectors and who encouraged Kang to tell his story. The book breaks your heart, turns your stomach, and then finally hands you a small morsel of hope. It also gives you a firm foundation from which to judge if President Bush is correct to include North Korea in his infamous "axis of evil."

War divided Korea, and Ahn Junghyo is familiar enough with the violence that he based two novels on two different wars. He was a boy in South Korea during the Korean War in the 1950s and later served in the White Horse Division, his country's contribution to the Vietnam War. He began writing "Silver Stallion" in 1964 during his junior year at Sogang Jesuit College; by that time he had so mastered English that he wrote this book in his second language. Told through the perspective of a Huck Finn-like boy, the war draws near to an isolated farm village and a "big-nose" GI rapes the boy's mother. The villagers ostracize her, and she becomes a "Yankee Wife."

"White Badge," Ahn Junghyo's second novel, looks at Korean soldiers who died in Vietnam and those who were left traumatized upon returning home. Our narrator is an impotent Seoulite recalling the ugliness of war: "Why had he in particular been devastated so irrevocably by the war; it had to be the war that destroyed him so utterly. I had met many Vietnam War veterans in Seoul who had gone through almost identical experiences." Ahn wrote this in a time when Korean publishers wouldn't touch such a book; it was only printed in his homeland after its publication by the independent Soho Press in America in 1989.

Mountains make up the geographic soul of Korea, and people head to them in good times and bad. Guerrilla partisans kept fighting after the war's end by hiding out in the Jiri Mountains after the end of the Korean War, and today hordes of hikers tromp up the mountainsides while they stay at guesthouses to rejuvenate their spirits when urban blight takes its toll. There are so many mountains that there's an old saying: If the mountains of Korea were flattened, the country would be as large as China.

The American expatriate scholar David A. Mason spent the last 20 years putting in trail miles and doing fieldwork devoted to his research of mountain shamanism. His book, "Spirit of the Mountains: Korea's San-Shin and Traditions of Mountain-Worship" (1999), offers a revelatory look at how this native religion is quietly practiced at individual shrines and Buddhist temples across the country. San-shin, a mythical persona, is depicted as a wizened white-bearded sage who inhabits the mountain valleys, creating sacred spots of power and spirituality.

In the first sentence of the book he writes, "Right at this moment, as you read this page, no matter what time or season it is, mountains are being worshipped in Korea." Mason dissects the iconography of tigers, pine trees and ginseng, and the book doubles as a travel guide to the shrines. Many guidebooks will tell you a thousands facts about a famous Buddhist temple, yet Mason's book teaches you to explore behind the temple and follow a jagged path in the woods that leads to a weathered stone altar dedicated to the spirit of the mountains.

For politics and history, try "Korea Witness: 135 Years of War, Crisis and News in the Land of the Morning Calm" (2006). Journalists Donald Kirk and Choe Sang Hun collected work from over a century of reporting from Korea, ranging from Jack London's coverage of the Russo-Japanese War for the San Francisco Examiner to an incisive analysis by Jon Herskovitz of the recent stem cell scandal of scientist Hwang Woo Suk. Together, the stories collected in this book offer an inside look at the evolution of the peninsula from its fin de siècle days as the isolationist "Hermit Kingdom," to the outbreak of the Korean War (often unfortunately called the "Forgotten War") and its eventual plunge into the industrial and digital age. The Korean peninsula is still divided by the DMZ, but it is good to know there are those out there whose job it is to bear witness and to ensure there will never again be another forgotten war.

James Card has lived in South Korea since 1996. His writing about Korea appears in Asia Times, Wired News, the Christian Science Monitor, ESPN Outdoors and other publications. He is currently at work on a book about his explorations of the Korean countryside.