Salon sorts through the lurid, the biased and the manipulative to find the shows worth watching about the disaster no one can forget. 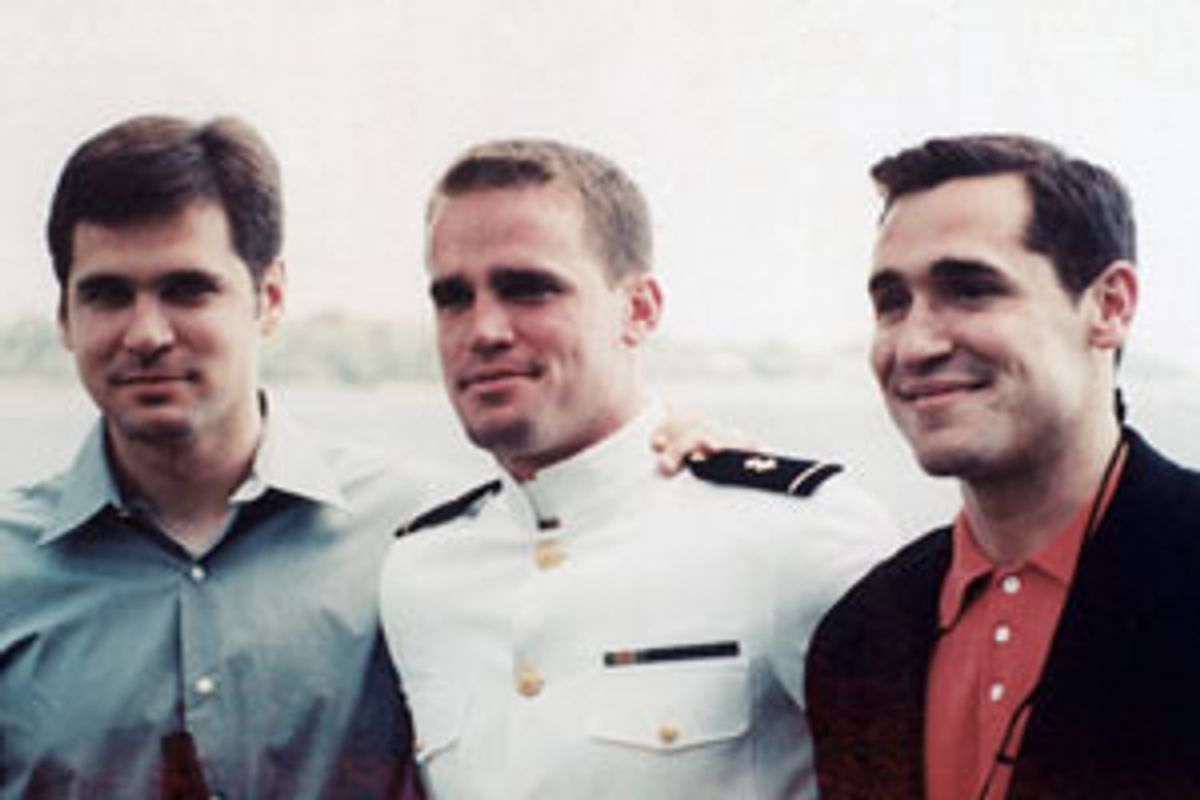 On Sept. 11, 2001, millions of Americans watched the World Trade Center towers burn and then fall on live TV. Most of us can still remember Aaron Brown on a nearby rooftop, with a giant dust cloud rising up behind him, mumbling, "Something is happening, we can't tell ... Something is happening..." Every night for weeks, many of us had nightmares about billowing clouds of black smoke and tall buildings toppling over, and during the day we felt certain that our lives as Americans would be punctuated by one fiery apocalypse after another.

Five years later, the sight of those buildings in flames still draws most of us into an almost hypnotic state, as we try to wrap our heads around the lives that were lost or the loved ones who were left behind. In honor of the fifth anniversary of 9/11, a bunch of TV specials are lined up for this week and next. But how do you pay tribute to an event that's unforgettable, one that looms in the corners of our consciousness at all times? All it takes is one look at the black smoke rising from the towers against a perfect blue sky, and most of us slow to a stop, mesmerized and overwhelmed by a hazy mix of sadness, anger and fear.

Upcoming 9/11 specials range from a whopping six-hour "Syriana"-style TV movie to a low-key documentary about men who lost their brothers, but all of them have the power to bring back the immense anguish of that day in their own way. Here we offer a summary of five of the most notable specials to air in the next week and a half. At first, this dramatic reenactment of the experiences of those trapped inside the World Trade Center towers feels a little bit lurid and sensationalistic, with people screaming at the sight of fiery explosions outside the building, or struggling under piles of collapsed walls and cubicles. "We're not going to get out of here, you know that, don't you?" one guy says to a woman in the north tower, right before he jumps out a nearby window. (While most scenes featuring those who died are obviously based on phone conversations they had with loved ones during the disaster, lines like this one seem to spring from some producer's lively imagination.) The experiences of a group in the Windows on the World restaurant is particularly upsetting -- they can't access the roof and they're instructed not to break any windows even though the restaurant is filled with smoke. But those aren't the only frustrations and mistakes of that day: Sprinklers fail to go off, doors to exits are locked, P.A. messages in the north tower tell workers not to leave the building in spite of the obvious flames and smoke, and security guards in the lobby of the south tower tell exiting workers to return to their desks, sending dozens back up in time for the second plane to hit. The big lesson here seems to be that during a major catastrophe, it's best to follow your own instincts.

In the end, though, the flashy effects and upsetting stories of the doomed are redeemed by some amazing survivor stories, narrated by the survivors themselves. One group is trapped in an elevator and must dig through several layers of Sheetrock in order to escape, and even then, without the help of a fireman they never would've made it out. Another group decides to head up instead of down, leaving one man behind in search of a male survivor he hears crying for help on the 81st floor, one of the floors demolished by the plane (both men survive, while the group that heads up the stairs perishes). The two men call each other brothers, and both remember the incredible bond they felt, making it to safety together. "Inside the Twin Towers" is not for the faint of heart, but despite its occasional resemblance to a '70s disaster movie, it does offer a glimpse of what thousands of survivors and victims went through that day. PBS offers a detailed examination of the efforts to design and rebuild at ground zero, from the Port Authority's struggle to get the New Jersey PATH station up and running to the difficulty of finding tenants for the already-rebuilt World Trade Center 7 skyscraper. While most New Yorkers are well-versed in the various design plans for the site and the controversies surrounding each one, PBS's special provides a concise look at some of the bumps in the road to creating a 9/11 memorial. The moving testimonies from those who lost loved ones and have strong feelings about how the site should be handled demonstrate what a difficult task it will be to create a memorial that provides a satisfactory experience for the families, residents of the area and millions of people worldwide who'll want to visit ground zero for decades to come. (You can catch Nova's "Building on Ground Zero," which focuses on WTC cleanup efforts, at 8 p.m. on Tuesday, Sept. 5th; check listings.) This documentary presents a collection of first-person narratives by 31 men who lost brothers on 9/11. Created by Sean McGinly, a film director whose brother Mark died in the north tower, "Brothers Lost" focuses on these men's memories, from shared laughs, practical jokes and quarrels, to the last time they saw or heard from their brothers. Their accounts are sometimes mundane, sometimes touching and sometimes very sad, but combined, they reflect the close bond that brothers often share, and demonstrate how unexpectedly difficult it can be to say goodbye to a sibling. Those interested in a very personal perspective on 9/11 that doesn't include reenactments or burning buildings should tune in for McGinly's quiet, respectful tribute. This extremely detailed dramatization of the events leading up to 9/11 moves very slowly, but provides a vivid (if somewhat biased) picture of our repeated, thwarted attempts to stop Osama bin Laden. The six-hour film plays like a 9/11 version of "Syriana" or "Traffic," replete with ultra-close-ups and so much shaky, hand-held footage it can feel like being led around the world, half-drunk and half-blind.

Of course, the FBI and CIA might as well have been half-drunk and half-blind, given how absurdly ineffective both agencies were in communicating and coordinating efforts to handle terrorist threats. We already know about the countless warning signs, but somehow this reenactment really pounds home just how many chances we had to stop 9/11 from happening. When CIA agents show FBI agent John P. O'Neill (played by Harvey Keitel) photographs of terrorist operatives, but then refuse to identify them for him, the sickening idiocy of the moment is almost too much to bear.

More disturbing, though, is the way the filmmakers seem determined to link the Clinton administration's missteps to the Monica Lewinsky scandal. Instead of offering us some indication of President Clinton's earnest efforts to stop Osama bin Laden, we're repeatedly treated to his most uneasy moments in the hot seat over Lewinsky, painting the president as a buffoon more interested in blow jobs than terrorists. Meanwhile, Condoleezza Rice gets that fated memo about planes flying into buildings, and makes it very clear to anyone who'll listen just how concerned President Bush is about these terrorist threats -- despite the fact that we're given little concrete evidence of the president's concern or interest in taking action. Maybe my memory fails me, but the only person I remember talking about Osama bin Laden back in 1998 was President Clinton, while the current anti-terrorist stalwarts worked the country into a frenzy over what? Blow jobs. In the end, "The Path to 9/11" feels like an excruciatingly long, winding and deceptive path, indeed. When I first encountered the DVD for this documentary, I intended to skip it, thinking it was too tangential to the main events of 9/11 to matter. Ironically, this is the exact attitude that hundreds of first responders at ground zero, now suffering and dying from respiratory illnesses, have encountered from government agencies and the public alike. Despite repeated assurances from EPA spokespeople in the wake of 9/11, the dust cloud created by the collapse of the twin towers included a poisonous mix of toxins and carcinogens to which no one, from residents of the area to rescue workers who labored to clean the site, should've been exposed. Several workers have died already, and many more are struggling with illnesses like asthma, bronchitis, pneumonia and lung cancer, many of them without worker's comp or adequate assistance from the government.

All of this was preventable, of course, since the EPA knew there were dangerous levels of asbestos in the dust, and knew that more tests were needed to figure out exactly what the dust contained before anyone returned to ground zero (eventually they verified deadly levels of asbestos, plus evidence of mercury, benzene and several other poisonous toxins). Sadly, though, the EPA was forced to work with the White House in crafting its message to the public, and any dire-sounding warnings by the EPA were reworded or deleted by the administration. All of this occurred under the leadership of James Connaughton, who had just been appointed chairman of the Council on Environmental Quality, and whose qualifications for the job, according to the documentary, was "representing large corporations in disputes about toxic waste sites, working against the EPA."

"We were told that CEQ had a desire to protect the national security and to get Wall Street open," says Nikki Tinsley, former inspector general for the EPA, "and that's the reason that the press releases were changed."

As a result, not only was the public misinformed about the health risks of the dust in the area, but there was no oversight in the cleanup efforts, and thousands of people returned to work in offices coated with the deadly dust. According to a parent at Stuyvesant High, kids who returned to school came down with illnesses including rashes, nosebleeds, asthma and chemical bronchitis. Worst off are the rescue workers who labored at ground zero, though, one of whom is shown gasping for air in the crowded basement where he lives since being forced to rent out his own house to afford his expenses and medical care. After giving so much of himself to the cleanup effort, this man waits, year after year, for some assistance from the government; apparently we Americans don't care all that much about our heroes once the big parade is over. Among the many specials set to air in the coming days, "Dust to Dust: The Health Effects of 9/11" is easily the saddest and the most shocking of them all.