With a big HBO deal, astronomical album sales and countless fans, Dane Cook may be the hottest comedian in years. So where is the laughter? 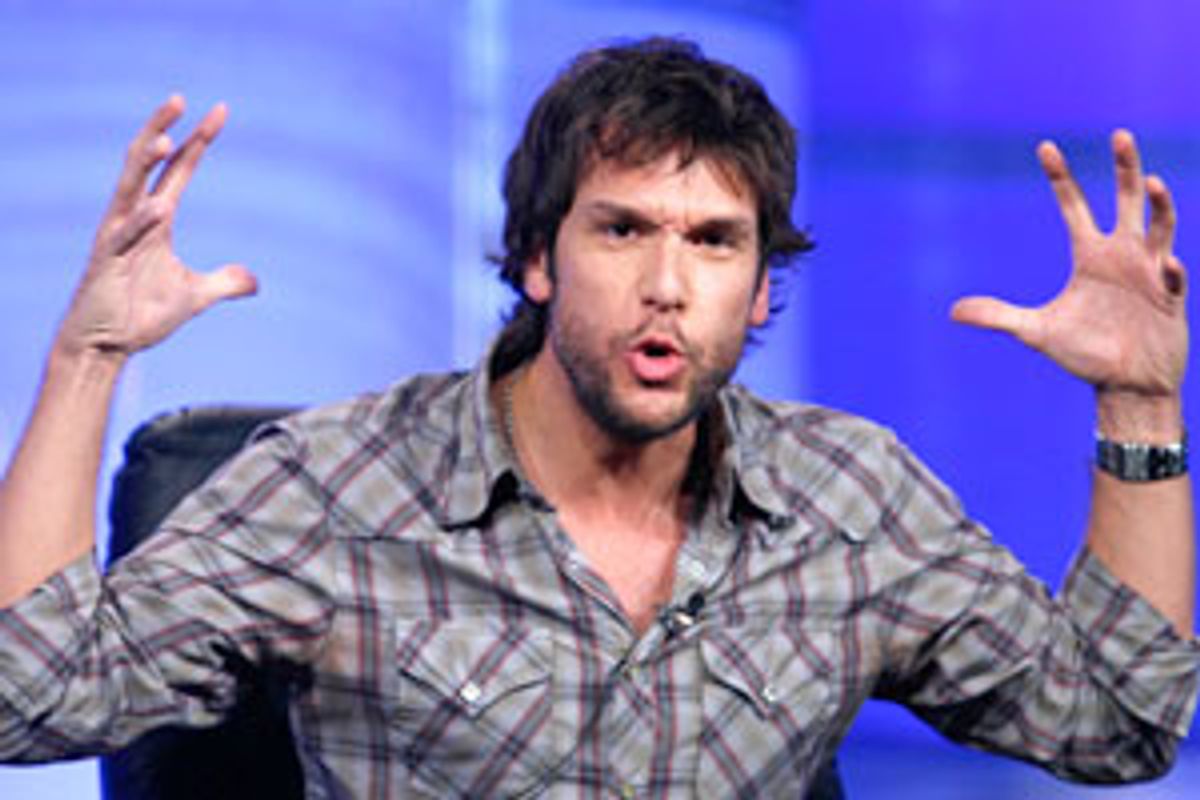 Dane Cook looks pleased with himself. He's just arrived onstage in Boston as 18,000 people scream his name and all make a gesture with their hands that looks like a cross between the finger and the sign for "Rock on!"

"What's up?" Cook bellows into his microphone, and the crowd goes nuts.

"When you're in the wrong relationship, with somebody awful, I call that a relationshit." (Huge laugh.)

"When I'm at the movies, I get so into it, that I talk to the screen?" (Clapping, laughing.)

"She must wash her vagina with a dirtier vagina." (Uproarious laughter.)

If the crowd loves Cook, they're not the only ones. His performance, taped by HBO and named "Dane Cook Vicious Circle," will premiere Monday, Sept. 4 (9 p.m. EDT, check listings). This summer, HBO also aired "Tourgasm," a look behind the scenes at Cook's tour of the college circuit with three other stand-up comedians last year. And according to the Hollywood Reporter, Cook has a deal to develop a scripted series pilot for HBO, and HBO has exclusive rights to Cook's work in "all nontraditional media platforms."

Why is HBO forsaking more sophisticated programming like "Deadwood" for a glorified frat boy? Maybe because that frat boy is alarmingly popular, and represents a potential cash cow for the financially strapped cable channel. Cook's second comedy album, "Retaliation," hit the Billboard charts at No. 4, making it the highest charting comedy album since Steve Martin's "A Wild and Crazy Guy" in 1978. Cook's "Tourgasm" podcast has been at or near the top of the iTunes most downloaded list since it debuted in June. This October, Cook stars opposite Jessica Simpson in the comedy "Employee of the Month," and has been rumored to be seeing Simpson, perhaps a calculated move on the part of some wily publicist.

But Cook's "Tourgasm" series may be the biggest indication of just how far HBO is willing to swerve from its more traditional, more sophisticated fare for the sake of its bottom line. Cook brings three of his comedian friends, Robert Kelly, Gary Gulman and Jay Davis, on a cross-country tour of colleges, intent on capturing all of the high jinx and hilarity on camera. Unfortunately, the guys start to get on each other's nerves almost immediately, and instead of joking around about it, they end up yelling, stomping off and then talking trash about each other for days afterward. This isn't spirited bickering, mind you, it's a bunch of tense confrontations in restaurants where two guys yell at each other while everyone else stares glumly at their plates. Even when the group rents Segways, apparently to approximate some of the good-natured, boyish fun of "Jackass," the guys knock into each other, take awkward spills and seem annoyed afterward. At Niagara Falls, we're treated to several minutes of footage of the guys threatening to throw each other's hats into the falls. And during a game of touch football, Kelly falls, tearing a ligament. Where Johnny Knoxville might moan dramatically while his friends laugh and jeer, Kelly whimpers to Cook, "Hold my hand," and everyone looks palefaced and upset. Woo-hoo, good times!

To understand just how unbearable "Tourgasm" remains from start to finish, imagine a cross between Jerry Seinfeld's "Comedian" (except the jokes aren't all that funny and the comedians involved aren't that interesting or clever) and MTV's "Jackass" (except the teasing and physical pranks aren't that fun or dramatic and they end in angry recriminations, sulking and serious injuries). In short, "Tourgasm" may be the least worthwhile series ever to air on HBO -- "Arli$$" included.

So what explains Cook's popularity? His comedy is most notable for what it lacks: a critique of the political climate (Dennis Miller, George Carlin, Jon Stewart, Bill Maher), a commentary on our culture (Chris Rock, David Chappelle), a slightly tweaked perspective (Ray Romano, Steven Wright, Jerry Seinfeld), outrageously dirty material (Eddie Murphy, Andrew Dice Clay), or just a goofy, oddball routine (Howie Mandel). Although his delivery can be chafingly smug, Cook doesn't present himself as anything special. He likes video games and chicks and sports and other general-purpose guy stuff. He's not particularly baffled by the world, or all that perceptive, or all that self-aware. He's a little self-deprecating, a little bit cutesy and a little bit aggressive, but most important, he treats mundane experiences like they're huge revelations: Breakup sex is the best, right? Right! Sometimes you have to lie to get out of stuff you don't want to do. I know you've done it, too, bro!

Even Cook's delivery isn't noteworthy or unique; he sprinkles "bro" and "dude" into every story, he's terrible at impressions and when he's imitating a woman, he inexplicably speaks in a high voice with a lisp, as if he's doing a homophobic imitation of a gay man.

But Cook's is the sort of non-threatening humor that appeals to people who, when watching Jon Stewart or Jerry Seinfeld, don't feel like they're in on the joke. With Cook, you're always in on the joke. Even if you've never been in a bad relationship or had breakup sex, you can just flash that "SuFi" and you're part of the club.

The SuFi, in fact, embodies the appeal of Dane Cook. Short for "Superfinger," it arose from a skit about Cook's quest for an upgraded version of giving someone the finger -- with the thumb, middle finger and ring finger extended. The emptiness of the gesture sums up the frat-boy camaraderie among Cook's fans, and his popularity among college students. In college, after all, jokes aren't really jokes at all, they're just code words for shared experiences. It's considered funny to refer to Burger King as "The BK Lounge" or to refer to a sandwich as a "sangwich" (we did this when I was in school, and Cook uses both terms often). And there's always a code for "You just got dissed!" (Burn, see ya, smell ya later, doh) and a code for "Rock on!" (sweet, dude, party, hell yeah).

Such multipurpose phrases are always vague, always applicable to almost any situation and always easy to understand when you're falling-down drunk. The content, in other words, is secondary to the fact that it's shared. Pretty much everything that goes on between Cook and the audience is just another way of saying, "I hear ya, bro!" Far from banal, this for Cook constitutes "a holy shit moment," as he puts it on his Web site. He and his crew are quite obviously aware of the appeal of such code words. In an interview with Entertainment Weekly, Robert Kelly remarks that, "If nothing else comes from 'Tourgasm,' the catchphrases are gonna be huge." (In case you're unfamiliar with how common such catchphrases are, the magazine hilariously refers to Kelly's "Hold my hand, man" as one.)

From his sloppy college kid look to his avoidance of anything political, cultural or remotely critical, Cook aims at appealing to those vast numbers of kids who haven't really developed any interests yet, and are most of all focused on having fun with a big group of people. While Seinfeld or Rock or Carlin or Miller react against the world, working themselves into a lather over just how idiotic and bizarre other people's behavior is, Cook's stories all boil down to the most familiar, relatable experiences he's had. His humor doesn't require even a glance at the wider world; it strengthens the bonds within a homogenous group. "Isn't it crazy when you..." or "How weird is it when..." By celebrating the myopia of the young, Cook has become the hottest comedian around.

Some have accused Cook of stealing material from Louis CK (the clips in question can be heard here, with Louis CK up first), but like all of Cook's skits, this material arises from fairly common experiences and could easily be a coincidence. What's most interesting about comparing the two clips, in fact, is how much more appealing Louis CK's delivery is than Cook's.

But Dane Cook isn't about to play down his talent or his successes. "Vicious Circle is what I would call my show because that is what I fought for endlessly for my young adult life," he writes on his Web site. "To come home and leave my name in the history books with this one gift God blessed me with." So his triumphant homecoming is best summed up by the words "Vicious Circle"? Once again, Cook has latched onto a random phrase that seems to bear no relation to his intended meaning, yet another odd choice by a guy whose popularity is just as unfathomable as his message. Luckily for Cook, millions of young people nationwide don't seem to care either way.