This endlessly fascinating, sometimes heartbreaking puzzle of a country that's fraught with religious and political conflict is brilliantly captured in the novels of Orhan Pamuk and Elif Shafak. 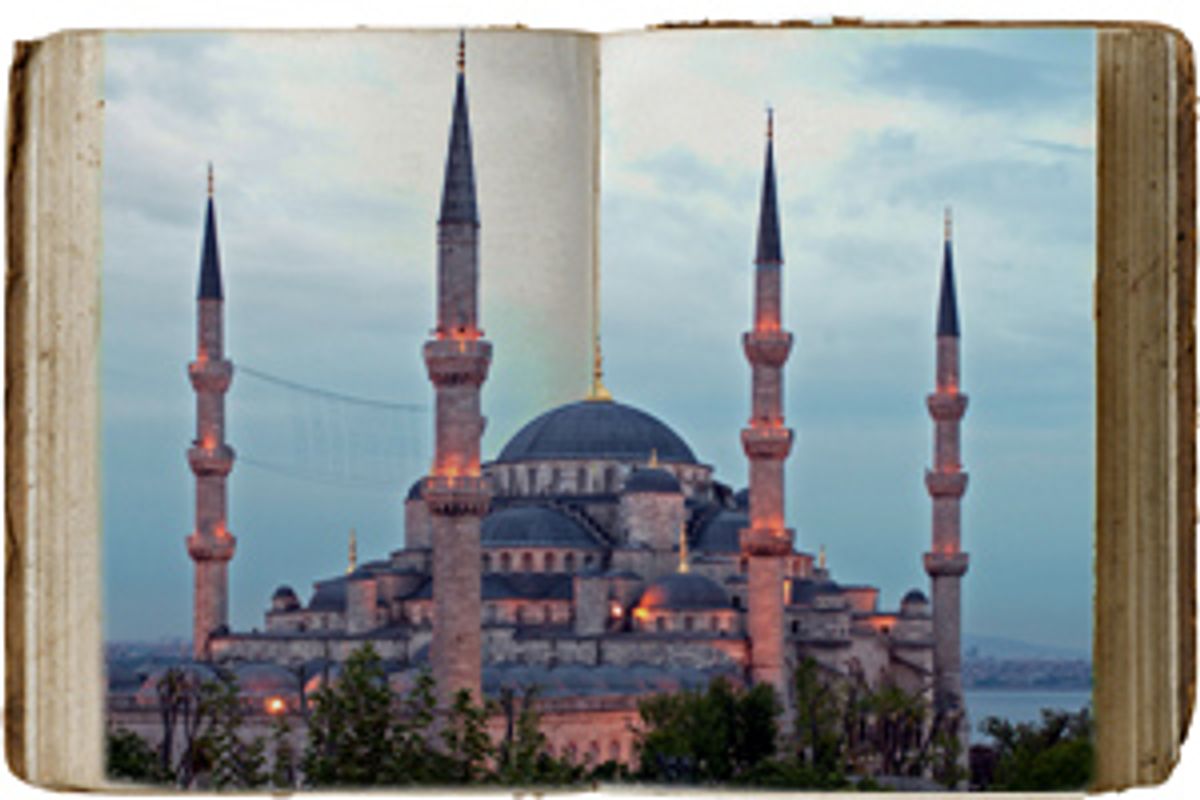 My husband knew better than to get me a diamond ring when he proposed. What I really wanted was what I always want -- plane tickets somewhere far away from wherever I happen to be. Rather than spend any money on a wedding, we decided to blow our rather paltry savings seeing the world. Right after eloping to city hall, we spent six weeks in Greece and Turkey. Then we came home, put all our stuff in storage, tied up the loose ends of our lives and bought one-way tickets to Saigon, commencing a yearlong jaunt through Asia. We've been to other countries since then, mostly in the Middle East and Europe. When I look at maps of the earth, I'm awed by all the places I haven't been, but I'm lucky enough to be fairly well-traveled. Last year, when I staggered over the finish line of a book deadline, exhausted and brain-fried, my husband and I decided to take another trip. We wanted to go somewhere foreign but familiar enough to be relaxing. I thought for a moment about where, in all the world, I'd most like to be. I didn't have to think long. Turkey.

The country is a traveler's paradise. The beaches are beautiful, and the coast is dotted with lovely, bohemian seaside towns like Kas where you can buy local pomegranate wine and swim in the Mediterranean. The lunar landscape of Cappadocia, with ancient houses and churches carved out of the soft, pale volcanic rock, is otherworldly. You can take a ride in a hot air balloon, and they'll dip low enough so you can pick apricots off the trees. Istanbul is one of the most gorgeous cities in the world, like a cross between Paris and Jerusalem, with street life to rival Barcelona's.

But Turkey is intriguing for reasons that go far beyond touristic pleasures. For anyone interested in the fate of a world tormented by authoritarianism, emerging fundamentalism, ethnic animosities and post-colonial furies, Turkey is an endlessly fascinating, sometimes heartbreaking puzzle. Americans can see flashes of their own situation in a nation struggling to balance its secular foundations with populist religious fervor. The collision between democracy and enlightenment modernism -- an agonizing one for liberals to contemplate -- animates much of its politics, as popularly elected Islamists are checked by the power of the resolutely secular army. Stretching between Greece and Iran, the country wants to join the E.U., but its past is bound up with the Middle East. Istanbul, which literally straddles Europe and Asia, is a rare Muslim city that retains a Jewish community, but Turkey is far from a beacon of pluralism -- attempts by the country's Kurds to express their identity are ruthlessly suppressed. The capital feels open and European, and yet its writers are censored and tormented by a government jealous of its national pride. In as much as it is part of the Middle East, Turkey is both one of the region's great success stories and the birthplace of many of its miseries, since it was the breakup of the Ottoman Empire and the subsequent Western redrawing of national boundaries that gave the world such unfortunate artificial configurations as Iraq.

If you want to understand how the multiethnic Ottoman Empire gave way to the fierce nationalisms of the modern Middle East, there's no better book than David Fromkin's "A Peace to End All Peace" (1989). Fromkin tells the story of how, after World War I, the European victors carved up the Ottoman Empire into the countries that exist today. His sprawling history portrays the prewar ferment among the modernizing young Turks, the exploits of Mustapha Kemal -- now known as Ataturk -- the army officer and revered founder of modern Turkey, the adventures of Lawrence of Arabia and the intrigues of various kingmaking Western Orientalists.

Fromkin's book is enormously enlightening, but novels can be even more helpful than histories in really trying to grasp the soul of a place. Turkey's most famous writer is Orhan Pamuk, and his hallucinatory 2002 novel "Snow" -- first published in English in 2004 -- is a parable of the country's current struggle over religion and democracy, in which liberalism is backed by the undemocratic might of the military. The story begins with an exiled poet and former student radical named Ka returning to Turkey from Germany and traveling to the eastern city of Kars. He's ostensibly investigating a string of female suicides, but he's really hoping to kindle an affair with Ipek, a ravishing former classmate.

The suicide epidemic among young Turkish women is real; as the New York Times reported in July, "Every few weeks in Batman and the surrounding area in southeast Anatolia, which is poor, rural and deeply influenced by conservative Islam, a young woman tries to take her life." According to the Times, the suicides are encouraged by parents who want to spare sons the punishments associated with honor killings.

The disturbing story "Snow" tells, though, is far more than a dramatization of these horrors. It's a vertiginous thriller and an enigmatic intellectual drama hinging on the nature of freedom and authenticity. Some of the girls kill themselves because of misogynist abuses, but one takes her life after the authorities outlaw the wearing of head scarves in school, a move intended to enforce secularism. A radical, avant-garde theater troupe arrives in Kars to perform a play about a heroically modern woman who burns her head scarf and is threatened by fundamentalist thugs. But the actors themselves turn thuggish, instigating a surreal, farcical coup against local Islamists. The troupe's leader, a lover of European culture, defends authoritarianism in the name of liberty, saying, "If we don't let the army and the state deal with these dangerous fanatics, we'll end up back in the Middle Ages, sliding into anarchy, traveling the doomed path already traveled by so many tribal nations in the Middle East."

Reading "Snow," it's clear that Islamism isn't really a resurgence of tradition in Turkey; it is its own kind of political radicalism. Conservative Islam is barely a factor at all in the rural world of one of Turkey's most famous novels, the Kurdish writer Yashar Kemal's 1955 "Memed, My Hawk." A Robin Hood story that reads like an epic folk tale, "Memed, My Hawk" seems to take place far from the modern world. It's the tale of Memed, a poor, fatherless boy, who, tormented by a sadistic feudal landlord, grows up to be a legendary brigand striving for justice and revenge. Kemal's language immerses readers in Anatolian village life; it can be alternately sublime and cheerfully ribald. I love this offhand exchange between an innkeeper and a friendly old man:

"Loudly enough for the innkeeper to hear from where he was scurrying to and fro, the old man shouted: 'There's that pimp who calls himself an innkeeper. Go and tell him your troubles.'

"The innkeeper heard and laughed. 'Listen, if you're looking for a pimp, the real chief of all pimps is that white-beard by your side. His beard has grown white from his misdeeds!'

While "Memed, My Hawk" feels timeless, the brilliant Elif Shafak writes novels that are audaciously postmodern and politically courageous. She is, as the Economist has written, "well set to challenge Mr. Pamuk as Turkey's foremost contemporary novelist." She's also facing state persecution for writing about the Armenian genocide in her latest book, "The Bastard of Istanbul." It won't be published in the United States until next year, but Maureen Freely quoted one inflammatory passage in a recent piece in the New York Times Book Review: "My father is Barsam Tchakhmakhchian, my great-uncle is Dikran Stamboulian, his father is Varvant Istanboluian, my name is Armanoush Tchakhmakhchian, all my family tree has been Something Somethingian, and I am the grandchild of genocide survivors who lost all their relatives in the hands of Turkish butchers in 1915, but I myself have been brainwashed to deny the genocide because I was raised by some Turk named Mustapha!"

Several of Shafak's earlier works are available in translation, including "The Gaze" (1999), an utterly strange, surprisingly riveting novel that goes back and forth between the story of an obese women and her dwarf lover in modern Istanbul and that of a freak show more than a hundred years earlier. Shafak loves to portray the rich cosmopolitanism of the Ottoman Empire; in one scene she conjures a crowd of women, "Jewish women from the miserable shacks of Balat, Gypsy women who carried their babies on their backs and their secrets in their bosoms, spoiled, pink-skinned Circassion girls, Arab women with mascara and jet-black hair, brides-to-be who tied silk handkerchiefs to the branches of the trees around the tent, rich Armenian women with palanquins inlaid with mother-of-pearl, Persian women who smelled of hot spices" The book is compelling for much more than its local color, though. Shafak pulls off the almost impossible trick of turning feminist theory into art, capturing the humiliating sting of strangers' appraising gazes better than anyone I've ever read. It would be fascinating no matter what city it was set in and can be appreciated anywhere, but I can think of few things lovelier than reading it on the roof deck of one of the small hotels in Istanbul's Sultanahmet District, the Blue Mosque in the background.

Books Middle East The Literary Guide To The World Travel