On her first broadcast of "The CBS Evening News," Katie Couric delivers empty news flashes and fluff with an impressive degree of gravitas. 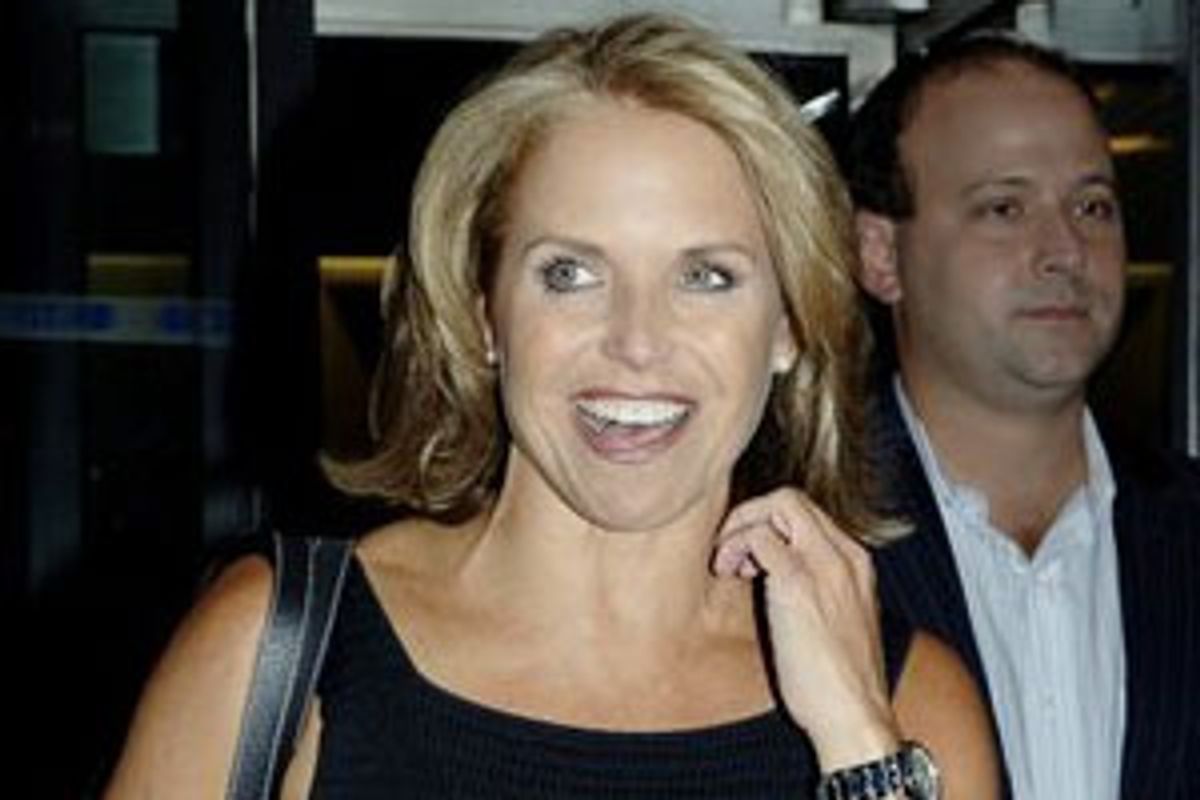 Katie Couric made history on Tuesday night as the first woman to solo anchor a network newscast, but from the reviews, you'd think she was a finalist in the "TV Spokesmodel" category of "Star Search." Even though Couric's demeanor was fairly straightforward and somber throughout the half-hour "CBS Evening News," journalists nationwide used diminishing words such as "chirpy" and "bubbly" and "touchy-feely" to describe Couric's delivery. Tom Shales of the Washington Post called her white blazer a "poor choice" that made her look "chubby." Even no-nonsense Reuters referred to her as "U.S. television sweetheart Katie Couric."

It's pretty tough to imagine anyone referring to "U.S. television heartthrob Peter Jennings" or commenting on an ill-considered suit jacket or tie on Bryant Gumbel or Dan Rather. And Matt Lauer may have the cutesy, cuddly "Aw shucks!" tone of Ferris Bueller, but somehow we're never reminded of how "perky" or "vivacious" he is. Apparently it's a major challenge for Americans to stomach a woman delivering the news at night.

Of course, instead of asking whether a chick can really bring us the news, pundits nationwide employed imaginative adjectives to disguise their true feelings. A writer for Forbes, like many others, posed the question, "Will she convey the gravitas to keep her on par with predecessors like Tom Brokaw, Peter Jennings and Dan Rather?"

The best response to this rhetorical question appeared on the CBS blog Couric & Co.: "After hearing that word (gravitas) a few times too often this summer, and hearing naysayers carp that it was something she [Katie Couric] needed, she finally decided: 'I'm convinced gravitas is just Latin for testicles.'"

First in a lineup filled with superficial features came "CBS News Briefing," a series of rapid-fire headlines on everything from a shake-up at Ford Motor Co. to the death of crocodile hunter Steve Irwin. Each item offered so little information, the segment amounted to scanning a few headlines at "Google News," then closing your browser. Take this non sequitur: "A study out today says nearly seven out of 10 recovery workers at Ground Zero have experienced lung problems." What kinds of lung problems? What caused them? No use in wondering, because Couric was already on to the next tidbit.

Then there was the adorably branded "freeSpeech" segment, in which Morgan Spurlock of "Super Size Me" and FX's "30 Days" offered up a rushed, skin-deep rant on the fact that America is filled not with drooling, rabid humans who shout at one another from opposite sides of every issue, as the media might have us believe, but with ordinary folks who embrace down-to-earth notions and values. Hilariously, Couric capped off Spurlock's "Up With [Ordinary] People" diatribe by promising divergent viewpoints (Rush Limbaugh on Thursday, folks!) and encouraging the audience to share their own views online -- you know, that place where drooling, rabid humans shout at one another from opposite sides of every issue. Trumpeting such interactive features played somewhere between silly and disingenuous but at the very least would seem more at home in Brooke Burke's closing remarks on "Rock Star: Supernova" than on the evening news.

And if you didn't find the talk of interactivity or the grab bag of news flashes disappointingly frivolous, the broadcast hit its low point when Couric gushed over the first published pictures of Suri Cruise. Sounding far more like Mary Hart than Tom Brokaw, Couric told us that "Vanity Fair has the baby picture everyone has been waiting for -- and tonight, so do we!" Instead of debunking the red state-blue state mythos, maybe Spurlock would've been better served to dismantle the notion that anyone -- let alone everyone -- is waiting for a publicity shot of the 4-month-old spawn of a two-headed celebrity gargoyle. What's next week's "snapshot," Heidi Klum's ultrasound? This is how the first woman anchor chooses to launch her legacy? Couric really does have balls -- er, gravitas -- doesn't she?

Just in case the launching of a legacy is lost on us, Couric admitted at the end of her broadcast that she had yet to dream up the perfect way to sign off every night. Of course, the whole notion that an anchor would sit around, before her first broadcast, trying to dream up a snappy trademark catchphrase is a real testament to the depressingly self-conscious, manufactured nature of today's infotainment news. We can only assume that Edward R. Murrow or Walter Cronkite actually delivered the news for a few years, then arrived organically at a genuinely felt send-off. Plus, adding insult to injury, Couric implored the audience to share once again, saying that "if you have a bright idea for a great sign-off, log on to our Web site at cbsnews.com and tell me. I know we'll have a lot of fun reading them, and who knows? Maybe one will actually stick!" That does sound like a lot of fun! But will we have the chance to text-message in our votes for our favorite catchphrase?

As queasily unfair as the hubbub surrounding Couric has been, she should've at least known one thing: This is no way to launch a legacy.