The late Steve Irwin was a great conservationist, whatever Germaine Greer says. 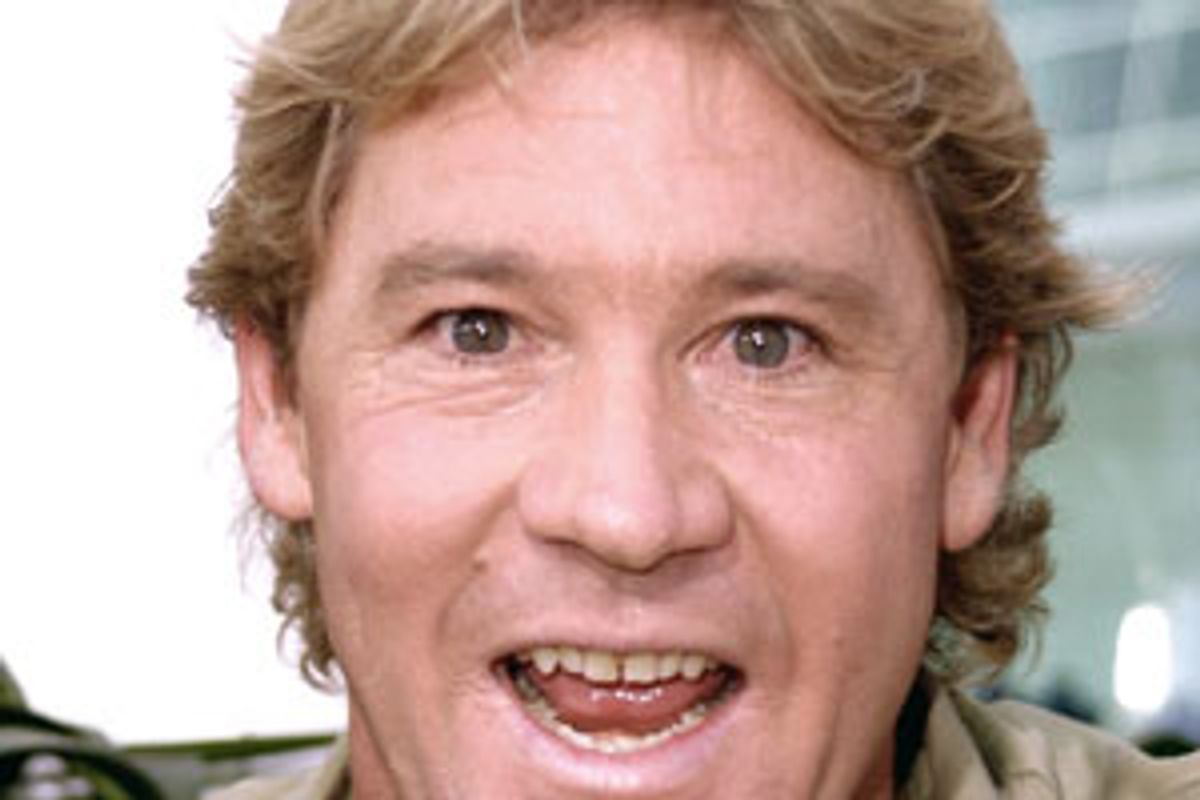 Wherever you were when the story broke, and whether you reacted with a smirk or with sympathy, news of the death of TV conservationist Steve Irwin quickly grew legs so long it outran every other item for days. Sure, the Crocodile Hunter's death was anything but unimaginable, but after it hit, Irwin's friends were in shock, and officials at the highest levels of the Australian government had tears in their eyes. Everyone knew Irwin, or felt they did: His "Crocodile Hunter" series on Animal Planet had swum steadily to popularity since airing in Australia in 1992.

The Hunter himself was snorkeling off Batt Reef in Queensland on Monday morning, engaged in shooting a documentary and feeling himself in no danger, when he floated over a stingray that shouldn't have been startled, but was. The macabre details of his death -- that the poisoned, spiny tail struck in or near his heart, and the later revelation that he pulled it out just before he died -- aren't in dispute. But what the demise of a charming showman with a somewhat challenged concept of self-preservation means to the rest of the world is very much a hot issue, and some of the backtalk has barbs that would do a stingray proud.

Three days later, the TV channels' mourning shows no signs of letting up as the critical snarling intensifies. Among the Irwin-trashing comments heard around the world, Germaine Greer's stands out for its lofty, literary disdain. "The animal world has finally taken its revenge on Irwin," the famous author, feminist and "Big Brother" contestant told the Australian press, likening Irwin's "jumping all over crocodiles" to lion taming in the circus. "I'm not saying that's not sad. I'm saying what might be over now is this kind of exploitation of animals." Among certain of the intelligentsia, the mumblings are similar. A blond surfer-ish conservationist-cum-cable star who mugs for the camera and waxes poetic in the presence of venomous snakes can't be a major force for good in the worldwide roulette game that is species survival. Or can he?

On the face of it, animals Down Under, especially the scary and uncuddly ones, seem to have had an easier time of it since Irwin went on the air. He strenuously protested wildlife hunts in his home country, and his personal objections to crocodile safaris had a lot to do with the Australian government's decision to impose a ban. Bouncy, fit and only 44 when he died, Irwin seemed made for TV. He was raised at his parents' Reptile and Fauna Park in Queensland and lived there as an adult, expanding the facility and renaming it the Australia Zoo. What seems to be bugging his detractors is a philosophical matter more than a practical one. Crocodile wrestling, after all, is sideshow stuff. Wouldn't he have been more effective as a cooler observer? Up close and personal does have its bad side, after all -- invading animal territory, as he's been accused of doing while shooting some of his shows, is anathema to true conservationists. And when Irwin was seen tossing snacks to a croc while holding his infant son under his arm, the fix was apparently in. His stunts were more "Jackass" than Cousteau. With guys like that around, Greer's hope of de-sensationalizing animal documentaries had a jellyfish's chance in hell.

There have been few serious contenders for Irwin's heroic slot. Jeff Corwin, for all his strong-stomached persistence, comes off like a student in comparison. A more worthy confrere is Sir David Attenborough, who sweated bravely away under pancake makeup for BBC's remarkable 10-part special "The World of Birds." Rapturously attentive, unfailingly polite, the unsexy Attenborough greatly increased public awareness of birds and their strange habits -- birds being, of course, an unsexy subject to begin with, as are crocs and the other nasties Irwin cherished. And therein lies a part of the TV conservation story not immediately apparent to Americans.

We are not, nor have we ever been, fans of the precious, or rare, or ugly in the animal world. Irwin is from a place on planet Earth whose living national treasures are hard to describe, let alone promote. Besides its disappearing wombats, which are now the subject of a heart-tugging TV campaign, Australia has a massive rodent boom to worry about, not to mention a frog plague as well as a number of horrid snakes and sharks that need attention. Nearby New Zealand has the unenviable task of suppressing the house-pet population in order to save its bizarre and mostly flightless endangered birds. (A few examples: the kea, a carnivorous parrot the color of immature compost; the kiwi, an "honorary mammal" that looks like a Shmoo from Lil' Abner cartoons; the ponderous kakapo, resembling an owl crossed with a green parrot, which makes nests in bare dirt and communicates by booming. There are only 87 kakapos left.) Imagine the United States undertaking such a task.

We have a lot to learn from remote countries that can get viewers interested in species that are hard to sell to the public, and selling to the public is what Irwin was all about. Unfortunately, the current media blitz is short on evidence of exactly what Irwin's impact was. No doubt this unusually experienced wrangler (he got a python for his sixth birthday) saved the lives of hundreds of animals while working in Queensland's crocodile relocation program. That Dr. Leo Smith, an expert on venomous fishes at the American Museum of Natural History in Manhattan, allowed Irwin the accolade of being more a biologist than just a television personality is no small thing. The value of naturalists is admittedly hard to pin down in dollars, cents, and legislation. But if Irwin's rare-animal breeding programs at the Australia Zoo are succeeding, as reports say they are, then he might be said to have aided the survival of some highly unusual creatures -- canopy goannas, crested iguanas, and bilbies, for instance.

Far from being hotly debated, the fragility of our environment in the United States -- as opposed to its diversity -- is hardly discussed. The American public has tolerated the politicization of its vertebrate natural resources ever since the Endangered Species Act of 1973. We're constantly chewing on public announcements such as that from the previous President Bush, portraying Mr. and Mrs. America as out of work and drowning in spotted owls. We may be the first country to create national parks, but our endangered species are a political football and a joke. We're not interested in anything but charismatic mega-fauna, and even when we can sustain a few minutes' interest, stewardship is widely considered to belong to movie stars with ranches in Wyoming. We can't even get an anti-horse-slaughter bill passed in Congress even though it enjoys wholehearted support from the majority of the population. And leaving conservation issues to otherwise-engaged celebrities has weakened our focus and left us with a maddeningly vague spattering of causes to consider.

Technological advances in video have enabled a closer look at dangerous wildlife than we have ever had before, but it's old-fashioned filmmaking that brings the message home, most recently and vividly in Werner Herzog's portrayal of Timothy Treadwell's death in "Grizzly Man." Plenty of enmity gets rained down on people whose attraction to dangerous animals leads to a mauling or death. More than one Alaska Parks Department employee called Treadwell an idiot and let it go at that. But the Grizzly Man himself was another story entirely. He longed to be subsumed by his beloved bears -- though perhaps not as literally as he was -- and he deliberately tempted fate. Irwin was also unlike the Las Vegas tiger tamers Siegfried and Roy. Roy Horn was mauled and nearly killed by a white tiger he had anthropomorphized. Irwin was perfectly happy to let his love scenes with crocs remain unrequited. He had no illusions about the animals he adored, and he was killed not by the object(s) of his affection, but by a one-in-a-million encounter with a normally passive animal.

The Crocodile Hunter's playground, half a world away, is a fantasy to most of us. Debate on whether he pushed his luck too far seems weighted on the "shit happens" side. The public seems especially confused about who was endangered by Irwin's occasionally dangerous behavior. "Don't try this at home, folks," Irwin might have said -- but invariably, people do. For every Irwin, there are hundreds of animal-world risk-takers, from professional snake-show handlers in Oklahoma and Texas to inebriated campers who fiddle with timber rattlers. Here in the Adirondacks, our manifestly intelligent wildlife expert has been snake-bit several times and will admit to nothing more than "it hurts." Radio host Ward Stone's job is almost impossible: to persuade the public not to chop up every endangered timber rattler that slithers across their lawns (and sometimes into their kitchens). Nobody wants to believe it matters. He's not in anybody's face enough, which is probably fine with him. A greater-than-usual interest in pit vipers, rabid raccoons and the like doesn't normally go with a TV star's personality.

Irwin found the mother lode of persuasion, and it was in his own personality. We need somebody with his charisma. Attenborough's intellectual brilliance doesn't play here, where we can't defend a habitat required by anything less cuddly than a Playboy Bunny. Crocodile kissers? Bring 'em on! Our reality isn't ugly enough.