Does Suri come from a casting agent's office, or a spaceship ... or Asia? The blogosphere spins the rumor mill. 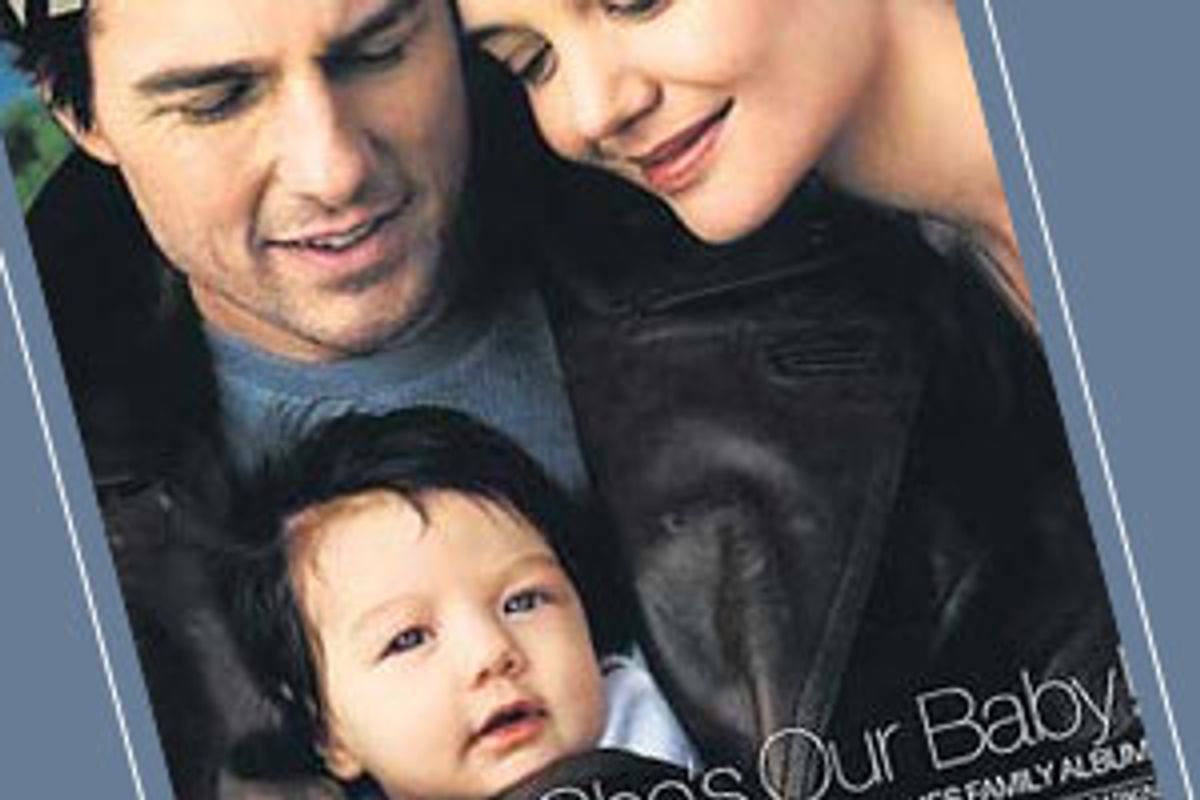 But Katie ... they can say that about your child. And they have been, and they will. We've all heard them -- the conspiracy theories to make tangible the vague doubt about Katie and Tom's bundle of joy. Although the mainstream press often hints at public skepticism, the best of the theories are found not in news stories -- Tom Cruise's publicist isn't that bad -- but on message boards and blogs all over the Internet. One only needs to press the "cached" link on a Google search to find smug declarations of what's really going on with TomKat and Suri.

Early on, the mystery of Katie's incredible shrinking/growing stomach led to fake-pregnancy rumors on Web sites, some with fun "Click to watch it grow and shrink" links on Katie's belly. Others were wondering whether Katie was articifically inseminated with the sperm of Scientology's founder, L. Ron Hubbard. A reporter appearing on CNN said it was a well-known fact that he had preserved his sperm.

When Suri was born on April 18, only to be hidden under a shroud of secrecy, the rumors intensified. "Maybe Suri Cruise is not real," one site politely ventured. "Not even ONE paparazzi OR candid shot? Baby Suri does NOT exist," a post on another gossip site declared in outrage.

Some pointed to fishy business with Suri's tardy birth certificate or to the harsh potential truth that Suri may not be quite cute enough for Tom's tastes. Still others speculated that because of her strict Scientologist father, Suri had been condemned to a life of silence, or that Scientology doctrine prohibited display of the baby. And some went the bottom-line route, insisting that Tom and Katie were just holding out for the highest price tag, like the classy stars that they are.

It would be logical to think that now that pictures of baby Suri are out, Cruise and Holmes could finally breathe a sigh of relief. But TomKat's media nightmare is far from over. Following the appearance of an admittedly cute little baby on the cover of Vanity Fair, bloggers and comedians now simply have a face to go with a tongue-in-cheek theory.

Just hours after the pictures hit the newsstands, Gawker.com revealed an already Photoshopped and considerably more alien-looking infant on its home page. The photo was a joke, but others have already spouted their theories about the real-life pictures: The baby is imported from Asia! Her hair is too long -- she must be older than 3 1/2 months. She might even be wearing a wig! She was plucked from hopefuls-to-be "cast" as TomKitten! Or, another popular response: "OK, the baby looks like Katie. But who's the daddy?" Burntcity.com, a particularly no-holes-barred gossip Web site, thinks he might be Jet Li, Jackie Chan or Keanu Reeves.

What do Tom and Katie have to do to lay to rest all the rumors? Sell a paternity test to CNN? Leak a sex tape to the press? Stay tuned.