While Bush was defending "tough" interrogation at one press conference, the Army was calling torture useless at another. 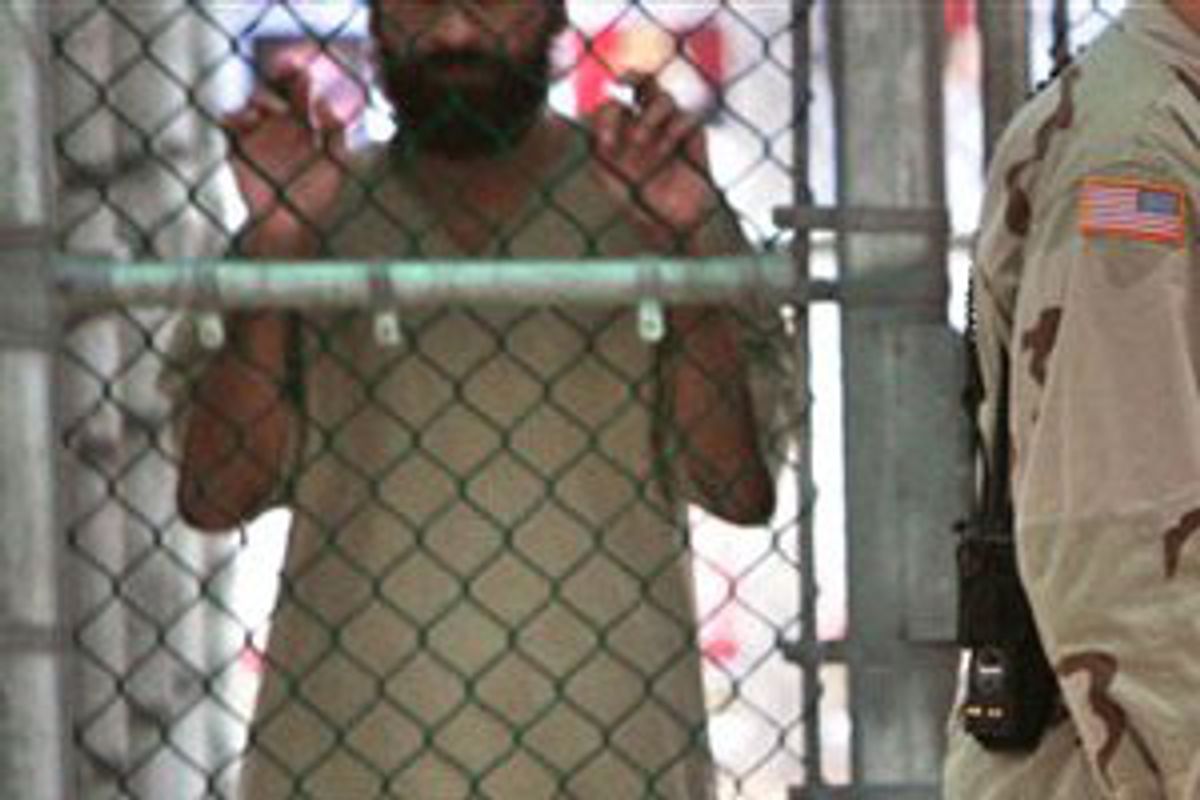 In the war on terror, abusive interrogations of suspects don't work. You get faulty information. The rough stuff has been proven worthless and should be banned.

Or, harsh interrogation tactics have been a successful and indispensable tool that has generated crucial intelligence to foil terror plots that would have otherwise caused death and destruction inside the United States.

On Wednesday afternoon, President Bush announced the transfer of 14 high-value terrorism suspects to Guantánamo for trials. He said that the suspects had been held outside the country by the CIA, and then admitted they had been detained as part of a secret program that also included specialized interrogation techniques, techniques the president described as "tough." Most observers believe the president was referring to a long-rumored program involving secret CIA prisons, or "black sites," where terrorism suspects have allegedly been sequestered, interrogated and perhaps tortured.

Bush defended those "tough" interrogation tactics, which he described as an "alternative set of procedures" specially approved by the Department of Justice. Bush said the tactics had saved American lives. "Were it not for this program," he claimed, "our intelligence community believes that al-Qaida and its allies would have succeeded in launching another attack against the American homeland." He insisted the techniques had been critical to specific successes: rounding up 17 Southeast Asian operatives who planned attacks inside the United States, "probably using airplanes"; stopping terrorists from detonating explosives on the upper floors of unnamed American buildings; and unearthing details of al-Qaida's efforts to develop anthrax. Notably, Bush claimed the "alternative" CIA techniques had cracked stubborn 9/11 suspect Abu Zubaydah and forced him to identify an alleged accomplice in the 9/11 attacks, Ramzi bin al Shibh. "This program has been and remains one of the most vital tools in our war against the terrorists," Bush argued. "It is invaluable to America and to our allies."

Bush would not provide any specifics about the "tough" tactics, other than to insist improbably that they didn't constitute torture. "I want to be absolutely clear with our people and the world. The United States does not torture. It's against our laws, and it's against our values. I have not authorized it, and I will not authorize it." He did say, however, that the Supreme Court's recent Hamdan decision "has put in question the future of the CIA program," because it effectively bars "outrages upon personal dignity and humiliating and degrading treatment." The Hamdan decision, in other words, bars torture, and forces the United States to observe the Geneva Conventions.

Meanwhile, across the Potomac, an Army general unveiled a new Army interrogations manual designed to fit squarely within the protections of the Geneva Conventions. That new manual specifically bars hooding, forced nudity, sexual humiliation, mock executions and many of the other "tough" techniques allegedly practiced in Iraq, Afghanistan, Guantánamo and the black sites.

The new manual was presented by Lt. Gen. John Kimmons, the Army deputy chief of staff for intelligence in a press conference that aired live Wednesday morning on the limited-circulation Pentagon Channel. During the press conference, Kimmons expressed a view about the effectiveness of "tough" interrogation techniques utterly different from the president's.

"No good intelligence is going to come from abusive practices," Kimmons said. "I think history tells us that. I think the empirical evidence of the past five years, hard years, tells us that." He argued that "any piece of intelligence which is obtained under duress through the use of abusive techniques would be of questionable credibility." And Kimmons conceded that bad P.R. about abuse could work against the United States in the war on terror. "It would do more harm than good when it inevitably became known that abusive practices were used," Kimmons said. "We can't afford to go there."

Kimmons added that "our most significant successes on the battlefield -- in fact, I would say all of them, almost categorically, all of them" -- came from interrogators that stuck to the kinds of humane techniques framed in the new Army manual. "We don't need abusive practices in there," Kimmons said. "Nothing good will come from them."

Critics of the detainee abuse that has flowered under this administration said the gap between Bush and the Pentagon reveals an entrenched belief at the White House that harsh techniques work. "This is pretty much deeply anchored administration policy at this point," noted Scott Horton, chairman of the International Law Committee at the New York City Bar Association. Horton said the message from Bush on Wednesday was, "'Torture works.' That was a big part of the sell."

Legal experts noted that the sell by Bush on Wednesday also included a request for a bit of legal cover. After referring to the secret CIA interrogation program, Bush asked Congress to tweak the War Crimes Act of 1996 to shield participants in the program (or, presumably, those who approved it at the Justice Department) from liability should courts now determine that the techniques approved were not just "tough" but also illegal. That 1996 law gives U.S. courts the authority to convict Americans for Geneva Conventions violations. "The men and women who protect us," Bush argued, "should not have to fear lawsuits filed by terrorists because they're doing their jobs." The White House may be worried about the liability of people a little higher up the food chain. "It is more a question of a concern about charges being brought against senior administration officials," said Scott Silliman, a professor at the Duke University School of Law who specializes in national security.

The oddly divergent arguments about the effectiveness of tough interrogations that surfaced at the White House and the Pentagon on Wednesday might also reflect the very different mindsets at the Pentagon and the CIA. The CIA and military Special Operations forces work under fewer clear-cut rules when doing human intelligence work, according to one retired general who chose not to be named, but the Pentagon brass likes to have the regular forces do things by the book. "The military intelligence people, when it comes to human intelligence, do it in a much more standardized, regulated way," the general explained. "That is separate from what the CIA and the Special Ops guys do."

"The [new Army] field manual reflects exactly what the conventional senior generals have felt for a long time," concluded the general. "You abide by the Geneva Conventions, and if you don't do that, you are endangering soldiers' lives."