What else I lost

I thought my dear friend's death on 9/11 would be the extent of my loss that day. But his wife -- my best friend -- left my life as well. 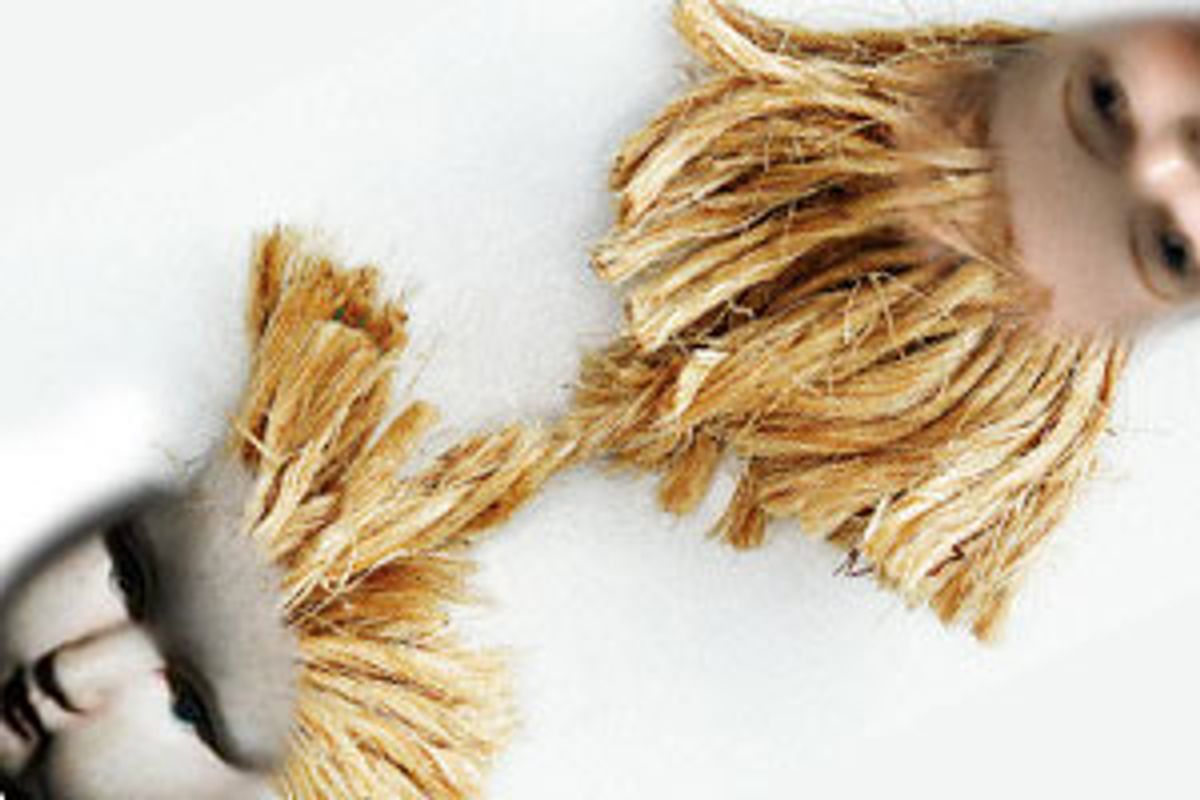 Five years ago, someone I had known for many years was brutally murdered. I spent 30 years prior to 9/11 believing that my misfit life was one of total singularity, an untransmittable, unshareable truth. Then a profoundly collective tragedy hit me.

My friend, Karleton, was murdered when his flight, American Airlines Flight 11, was hijacked and crashed. Karleton was married to my childhood best friend, Haven, whom he had dated since we were all in high school in Durham, N.C. They were very much like my brother and sister. When I traveled to Boston after 9/11 to be with Haven, I flew as her sister on a special chartered plane only for victims' families.

I passed about four weeks in Boston after the terrorist attacks. They were the worst days and nights of my life. But not for the reasons I thought. I had never imagined, and I still have trouble explaining to anyone, how grief can alienate people from each other. What happens to friendship in the face of unsupportable pain? What happens when you remind your best friend, through no fault of your own, of the past, a past she no longer wishes to acknowledge?

Haven and I met when we were 14 years old. We were both poor, and both extremely interested in being beautiful and sophisticated. I worked as a prep cook in the restaurant where her mother worked. The first time we ever hung out, we white-trash 14-year-olds, we went to see a foreign film with Ben Kingsley and Glenda Jackson called "Turtle Diaries." We would have done anything to seem remotely mature, stylish and wise beyond our years. Our girlish love for one another had an innocence and a tenderness that came from a deep need. Both only children, both with depressed single mothers, we were very intrepid in our attempts to transcend our origins.

Haven met Karleton at the grocery store where they both worked. He was tall, and shy, funny and skinny. He was smart. He had a vague Southern accent, although his parents weren't Southerners. When he died, I had known him half my life. He was my best friend's boyfriend, and then husband, the subject of her analysis and complaints and swooning and devotion. As time passed, he was almost like a corrective brace on a scoliotic back. His sureness, his confidence in her, his respect, gave her a core of faith in herself that she never had before him. But in his normalcy, he remained enigmatic to me.

I don't think it was until their wedding in 1994 that I became aware of what a tender and loving person he was. I was the maid of honor and I sang the song for their first dance, "Our Love Is Here to Stay." I was very drunk because the caterer had brought far too little food, and Haven had asked me to forgo eating, as she did, to leave more for the other guests. So I had consumed only wine since arriving at the beauty salon some 10 hours earlier. I don't remember doing it, but the wedding photos later proved that at some point, perhaps while the jazz band was warming up, I had removed my uncomfortable strapless bra from under my gown, and left it hanging across one of the hedges in the formal gardens where the ceremony was held.

I was 23 years old and my closest friends in the world were getting married, and it probably seemed as though that bra was cramping my style on an otherwise perfect day. Karleton was so appreciative that I shared their sense of joy. Before he left, he said to me, "You are the kind of friend that people name their kids after."

Karleton called me in California when Haven first went into labor in Boston. "How soon can you get here?" he asked. A few weeks later I was holding their perfect baby in my arms. When I spoke to Haven on 9/11, we cried together about the adoring father that her son would never know. And she told me her other news: She had discovered she was pregnant again, only the day before.

When I arrived in Boston after 9/11, I spent a lot of time sitting on the stoop of Haven's building, hoping someone I knew would come in or out. I didn't have a key and they didn't answer the door or phone. It seemed so crazy. She had asked me to fly across the country to be with her and I literally could not get in her door. One day I was sitting on her stoop and she came out. "Haven," I said. "Hi," she said to me. "I have to go. One of my co-workers is picking me up, and taking me for an ultrasound." "Well, I could take you," I offered, lamely. "That's OK," she replied. "She's already on the way." I wonder now, if that was the exact moment that our friendship ended.

I knew that she was unable to feel good around me, and that my best intentions, and my best judgment about how to act and react, didn't matter. I was part of the past. I was dead too, and my relentlessly unnecessary presence had to be ignored so that she could go forward.

But I was stubborn. I stayed on for a couple weeks more, mostly because I never had an opportunity to ask her if I should leave or not. I stayed at her neighboring friends' until they tired of me and asked me to go to a hotel. I was a horrid guest. I drank heavily from their stocks without asking and watched their television all night. I can't blame them at all. But once I got to the hotel, for those final weeks, I was in a state of ragged hopelessness. I was alone, with no friends and no idea when I should leave and no ability to be of any use to anyone while I was there. My girlfriends from California called me and chattered into my ears about their boy problems. I read "Fast Food Nation." I made macaroni and cheese in my kitchenette. Night and day were a grinding blur while I stood on the precipice of losing my best friend.

I got back to California and quietly tried to imagine that eventually we would have a new friendship, maybe even a closer one. I imagined that we were going to be bound even tighter by the loss that only we could understand. I went to Hawaii on tour with a band, and on Haven's birthday, I mailed her a long letter about missing her and her son. I never heard back. I continued to send her little gifts and notes. They weren't reciprocated. The next year I moved to New York, hoping to make frequent visits to Boston. I was never invited.

After a year, I insisted, and brought my boyfriend -- now my husband -- to meet her. We met her new son and her new boyfriend. I hoped that having a steady relationship with someone she approved of would make me more appealing to her, but it didn't. I hoped we could be like girlfriends again, talking about our romances, but the differences in them clouded everything. I was falling for the man who would be my first husband, hopefully my only husband. She was a widow with children, dating. We weren't the same, and it was asking too much of her to pretend we were.

Another year went by, and I was invited to her wedding. It was something I had dreaded since shortly after Karleton had died. I knew that if she remarried, I wouldn't be her maid of honor again. I wouldn't be the one who advised her on the dress and helped her pick out the wine. I knew that the experiences we had shared in her first marriage would not be repeated. I watched from the crowd while my best friend married her new partner. I didn't know very many people in attendance, didn't recognize the people toasting. At one point, I tried to introduce myself to the maid of honor, the groom's sister. "Hi," I said. "I'm Tris. I was the maid of honor when Haven wed Karleton. I know how happy and excited she is about you and your wonderful brother." "Thank you," she said, politely, looking around. "Would you excuse me?"

I had always felt in some unspoken way that our friendship had a fragile core, that I was lucky if it kept on going. Maybe that was my own self-doubt, or maybe that fragility, that uneasy fit, had always been part of it. Maybe we weren't really best friends, or maybe it was just that I didn't inspire the kind of loyalty that other people do. Or maybe nothing made sense anymore. Maybe when someone is violently thrown out of the life they had made for themselves, they need to do anything they can in order to survive. Because life is the opposite of death, and survival is the opposite of murder.

Five years ago, in response to Karleton's death, I became a grieving proto-neocon, certain of myself, as passionate and extreme as I had been as a leftist before. The death of my friend had filled me with anger and clarity. I was opposed to the moral relativism of prominent leftists, who asked us to consider why the 9/11 conspirators acted as they did, what the U.S. had done to provoke them, what Israel's crimes were. I could not make that leap, and I was almost alone in my family and community in believing that there is no justification for mass murder.

Five years later, there is no resolution on any front. My beliefs have been tested and remain largely an article of faith. I believed in U.S. military intervention in Afghanistan, Iraq and elsewhere. But I am watching our policies fail; I see chaos and despair in the wake of our efforts.

Both my politics and my personal experience of 9/11 started out as blazing rage and have faded into reflection, the pondering of questions that have no answers. Why does grief forever change people? Why aren't Haven and I friends anymore? What did I do? And what right do I have to complain? There isn't an answer. Whatever I have done wrong, I believe my intentions were good. I tried to do the right thing. It just didn't work.

When Haven got remarried, I sent her champagne glasses from Tiffany. It was an extravagant gift that I couldn't really afford. I was reaching. Many months went by, and I began to wonder if the glasses had even arrived. I became paranoid that, although Tiffany assured me that they had been delivered, that perhaps they hadn't been received. I didn't want to write Haven a note asking about them, though. If I were to write her, I wanted it to be something meaningful and happy and personal. And if I was to hear from her, I wanted it to be an invitation to visit, or an anecdote, or just that she wanted to say hello. Eventually, after eight months, I sent her a note asking if she had received them. I received a very polite thank you card less than a week later. "Thanks for the gift," she said. "I love them. We'll think of you whenever we are toasting."