The Sept. 11 that never was

ABC's docudrama "The Path to 9/11" is a false version of history. It popularizes right-wing myths by exaggerating Clinton's failures and Bush's successes, depicting events that never happened. 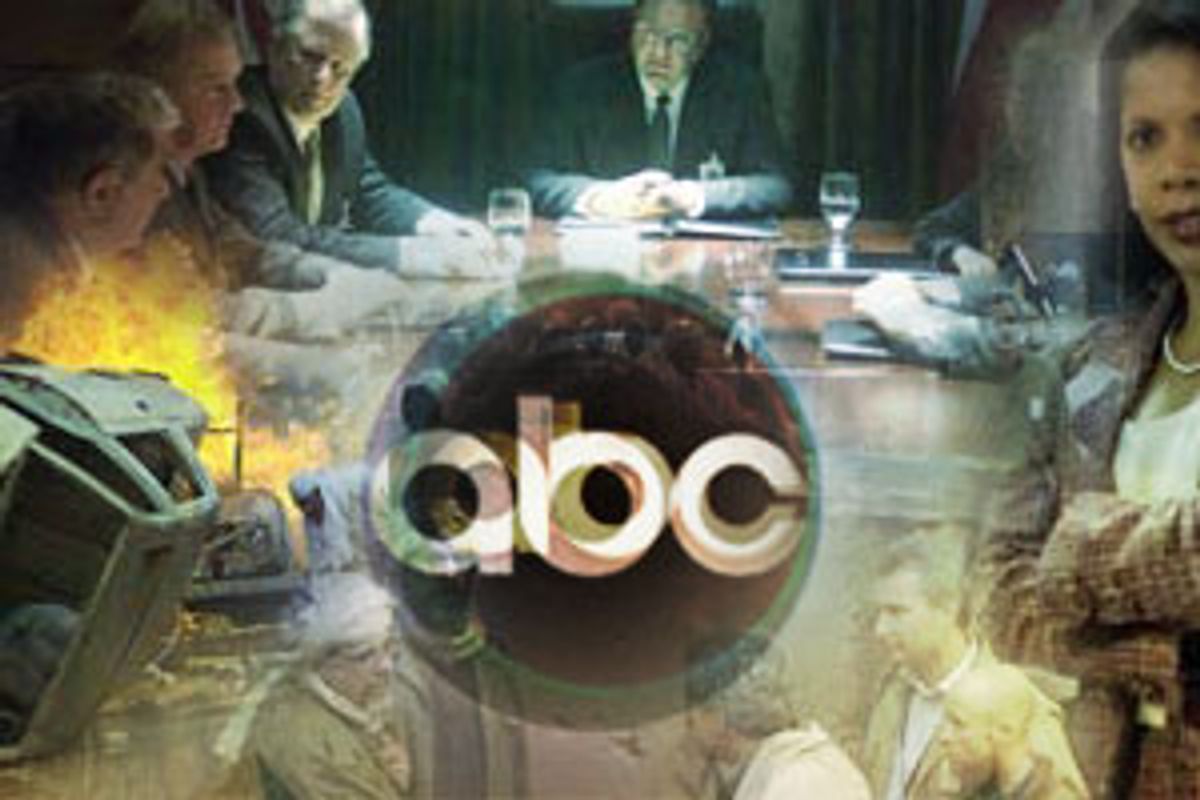 It would be uplifting to believe, as the producers of ABC's "The Path to 9/11" have claimed, that the network spent $40 million on its anniversary docudrama to educate the American people and improve the nation's defenses. And it would be reassuring to believe, as the producers have insisted in recent days, that "our ambitions and our goals and our standards were all about accuracy." But it is impossible to believe, after viewing their somewhat cheesy, sometimes incomprehensible and severely distorted version of the events leading up to the attacks of Sept. 11, 2001, that they acted in good faith on either of those motivations.

Whether "The Path to 9/11" succeeds in cinematic terms will be judged by professional critics, who may or may not find the performances convincing, the script compelling, the visuals effective and the direction competent. Certainly the movie benefits from the presence of actors such as Harvey Keitel, who plays legendary FBI agent John O'Neill, and from location shooting in Morocco, New York and Washington, but these filmmakers are not about to displace Bernardo Bertolucci, Richard Attenborough or even Oliver Stone.

Part of the problem faced by the makers of "The Path to 9/11" was the sheer scope and complexity of the story they attempt to tell, which begins with the first bombing of the World Trade Center by Islamic terrorists in February 1993 and concludes with the catastrophic second assault on the twin towers and the Pentagon. The main narrative thread traces the often frustrating campaign by O'Neill, a truly heroic cop's cop, and his ally, former White House counterterrorism director Richard Clarke, to stop al-Qaida's myriad plots against the United States.

That story deserves to be told well -- and has been recounted already with considerably more care in Clarke's own book and in "The Man Who Knew," a PBS "Frontline" documentary about O'Neill that first aired in October 2002. The ABC dramatization, of course, is intended to reach millions of viewers who don't read books, let alone government reports, and don't watch documentaries. The danger is that this false version -- which popularizes favorite right-wing myths -- will be seen by millions and accepted by them as truthful. (On Thursday, Rep. Louise Slaughter, D-N.Y., called on ABC to make clear that "The Path to 9/11" is not an official account of the facts surrounding 9/11, noting, "We have yet to establish the impartiality and accuracy of the people behind this film and the claims it advances, and the American people need to know that.")

Suspicions of bad faith about the production of "The Path to 9/11" have less to do with the alleged personal bias of Cyrus Nowrasteh, the conservative writer responsible for the script, and more to do with what he chose to invent on-screen -- and what he and the producers chose to omit. In essence, Nowrasteh created scenes that never happened, which depict Clinton administration officials allowing Osama bin Laden to escape capture or death for diplomatic, political and legal reasons. And he left out important material about how Bill Clinton and George W. Bush confronted the terrorist challenge.

Nowrasteh's most egregious fictionalizing occurs in Act 4, which depicts a supposed strike on bin Laden's Afghan redoubt that is called off at the last second by Sandy Berger, Clinton's national security advisor, who says, "I don't have that authority." Under cover of night, a CIA agent known only as "Kirk" leads a Special Forces team into the remote mountain compound where the al-Qaida chief is hiding. "The package is ready!" cries Kirk over the satellite phone, but Berger aborts the operation because he doesn't want to take responsibility.

That incident simply never occurred. As Clarke himself would have told Nowrasteh, no CIA officer ever tracked bin Laden to his hideout. Neither did Ahmed Shah Massoud, the Northern Alliance leader who is shown guiding the aborted operation. The handsome, charismatic Massoud, later assassinated by al-Qaida agents, asks Kirk angrily, "Are there any men left in Washington, or are they all cowards?" That sort of rhetoric is frequently uttered by actors portraying characters such as Massoud and O'Neill, who are no longer around to dispute the script.

Had Nowrasteh consulted the 9/11 Commission report, not only would he have found no evidence to support his exciting imaginary assault on the bin Laden compound, but he would also have learned that the underlying assumptions were completely wrong. The report states explicitly, as Clarke and other senior officials have affirmed, that Clinton and Berger ordered the CIA and the military to use any force necessary to get bin Laden.

According to Clarke, his former assistant Roger Cressey and others with direct knowledge of the circumstances, Clinton "approved every request made of him by the CIA and the US military involving [the use of force] against bin Laden and Al Qaeda." Planned operations to take out bin Laden either by ground assault or missile strike didn't happen because senior intelligence and military officials told the president that they could not be conducted successfully.

Especially shameful, by the way, is former 9/11 Commission chairman Tom Kean's endorsement of that particular tall tale, as a consultant to the ABC production team. A nice enough man, although never the sharpest mind on the commission (or anywhere else), the former New Jersey governor may be promoting the party line on 9/11 now because his son Tom Kean Jr. is the Republican Senate nominee in his home state (and recently benefited from a fundraising appearance by former President Bush). But Kean's strange willingness to ignore his own findings does not change the facts.

The movie shows former Secretary of State Madeleine Albright -- who is played as a fussy, irritable Margaret Dumont-style matron -- thwarting a missile strike against bin Laden's desert camp by warning his Pakistani friends in advance. That never happened, either.

And in its most blatant appeal to right-wing pathology, the movie repeatedly suggests that Clinton was either distracted or prodded by the Monica Lewinsky scandal and the ensuing impeachment, taking action or deferring action for political reasons. Clarke has repeatedly denied that considerations of that kind influenced policy on any occasion. (For more on the conservative mythology of 9/11 see my answer to Andrew Sullivan on the subject in 2002.)

Clarke has said that the Clinton administration didn't fully comprehend the threat from al-Qaida until the U.S. Embassy bombings in Africa in 1998. (Neither did Clinton's critics.) And it is also true that Clinton didn't mount a full-scale assault on the al-Qaida camps in Afghanistan, as Clarke advised, but that decision, regrettable as it now seems, was influenced by broad geopolitical considerations. And Bush declined that option as well, until after the 9/11 attacks.

If the producers of "The Path to 9/11" unfairly indict the Clinton administration with fabricated scenes and notions, they go out of their way to exonerate the Bush White House by ignoring certain damning facts -- and creating substitutes that make the president look better. The movie shows a smarmy, condescending Condoleezza Rice demoting Clarke in January 2001 when she takes over as national security advisor. Clarke tries to warn her that "something spectacular" is going to happen on American soil, and she assures him that "we're on it," which they assuredly were not.

Indeed, the script downplays the neglect of terrorism as a primary threat by the incoming Bush team -- and never mentions the counterterrorism task force, chaired by Vice President Dick Cheney, that never met for nine months before 9/11. The famous Aug. 6 presidential daily briefing, which warned the vacationing Bush that al-Qaida intended to strike here, is given due attention. But the movie then shows Rice telling her associates that "as a result of the Aug. 6 PDB, the president wants to take real action" against al-Qaida. But the 9/11 Commission report's section on the PDB clearly states that the August warning was not followed up on by Rice:

"We found no indication of any further discussion before September 11 among the President and his top advisers of the possibility of a threat of an Al Qaeda attack in the United States." No action was contemplated before 9/11 and the movie's attempt to claim otherwise is another distortion.

As I wrote this column, the Los Angeles Times reported that ABC had made "minor" alterations to some of the movie's most glaring errors. But for a production that rather tastelessly and gratuitously promotes ABC News in its script, no last-minute edits can restore news values that the producers never respected.

The ultimate irony is that this project -- based on the work of a commission whose bipartisan members swore to pursue and reveal the truth about a national disaster -- is likely to perpetuate old partisan canards instead of dispelling them.