Russell Crowe charms his way through a press conference -- and his new film. Plus: Borat makes us laugh; Will Ferrell doesn't. 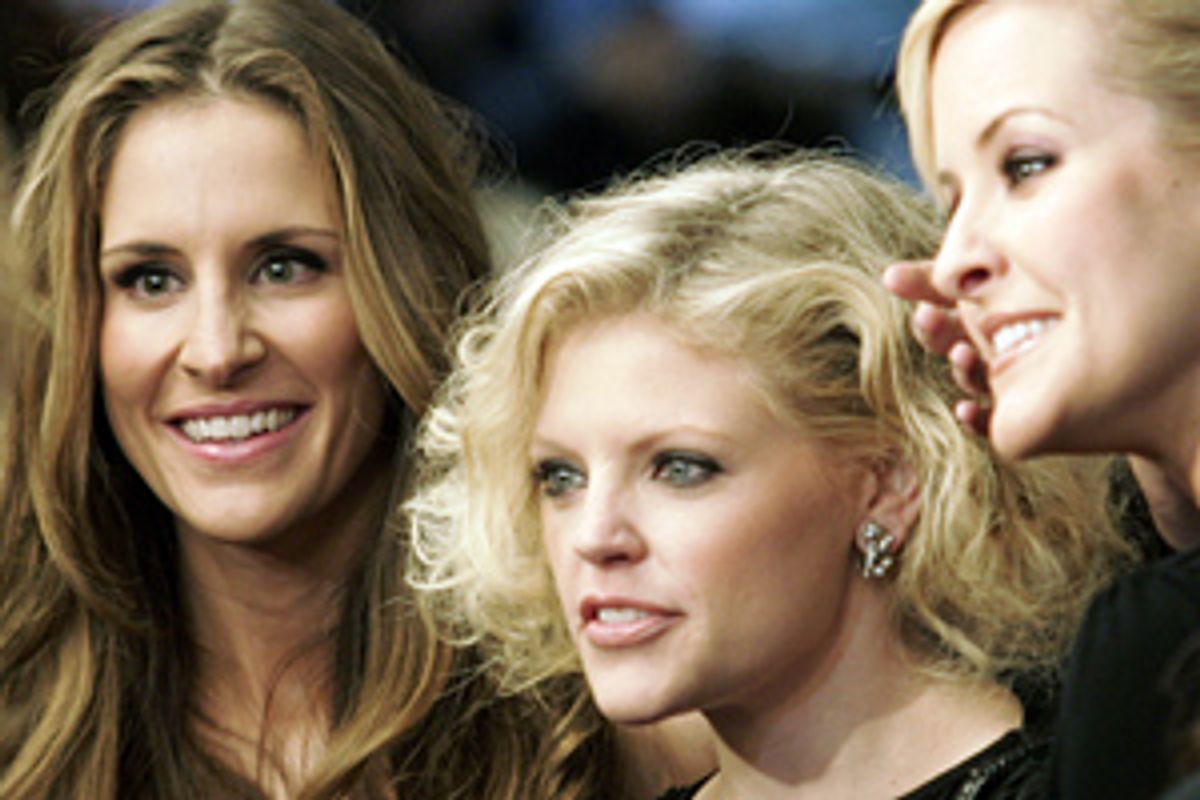 The film festival may be the biggest September event in Toronto, but it's by no means the only one. Saturday morning, during the 30-minute walk from my rather modest hotel to the much swankier Sutton Place -- where I was headed to attend a press conference for the new Ridley Scott-Russell Crowe picture "A Good Year" -- I happened to find myself in step, for a span of five blocks or so, with the Tai Chi Taoist Society parade, which consisted largely of groups of cheerfully placid senior citizens in matching orange T-shirts showing off their fanciest Tai Chi moves. (It was kind of a slow-moving parade.) Happening upon a parade isn't such a bad thing during a film festival: When you're trying to pack three, four or more screenings into a day, life outside the movies begins to seem only peripheral. Movies are supposed to reflect life, not usurp it, so a little Tai Chi on the way to basking in the glamour of Russell Crowe can only help you keep perspective.

Actually, it's possible the parade seniors were dressed a little more glamorously than Crowe was: While his "A Good Year" co-star, the casually disarming French actress Marion Cotillard, had that I-just-threw-this-on elegance the French pull off so well, Crowe showed up in a football hoodie and track pants. (I think he'd combed his hair, though I'm not sure.) But that's OK: No sane actor can possibly like the job of answering journalists' well-intentioned but often rather dumb questions, and Crowe managed to come off seeming as if he didn't really mind being there. Sometimes the better part of star power is the ability to be relaxed and convivial even in the most contrived situations -- and press conferences are nothing if not contrived.

"A Good Year" is based on a Peter Mayle novel (Mayle was also present at the press conference), and, like all of Mayle's novels, it's set in Provence. Crowe plays Max Skinner, a scrappy London high-finance type whose uncle (Albert Finney, wonderful as always), with whom he hasn't been in touch in years, unexpectedly leaves him one of those amazing giant French houses that's just charmingly crumbly, complete with vineyard. Max just wants to unload the thing as quickly as possible, enlisting the aid of a lawyer-friend played by Tom Hollander (also in attendance at the press conference -- in fact, Hollander's deadpan zingers could probably improve any press conference). But its not long before the pointy trees, the curvy roads, the mellow golden light of the French countryside all work their magic on Max (the presence of Cotillard's character, a local waitress, doesn't hurt, either) and -- well, you can guess the rest. "A Good Year" is the kind of polished Hollywood product that intelligent, informed, hip consumers of contemporary culture are supposed to sneer at. It's also shamelessly entertaining, and having been shot in the south of France, it's also, of course, fabulous to look at.

Best of all, "A Good Year" restores some of Crowe's casual, throwaway vitality as an actor. Crowe has specialized in stern and serious roles, and he tends to come off as a stern and serious guy, his regular-bloke affability notwithstanding. (As he and his posse were being introduced at the press conference, he scrutinized the audience with a polite yet wary "Who exactly are you people?" intensity.) But Crowe is almost criminally charming in "A Good Year," in a way he hasn't been -- possibly hasn't allowed himself to be -- since, perhaps, "The Sum of Us" (1994) or Claire Peploe's lovely, overlooked 1995 "Rough Magic." Even people who don't much care for Crowe as an actor would have to admit the novelty value of seeing him, in "A Good Year," do a double-take as a group of hens boldly invade the hallway of his run-down manse, incensed because they know it's really their house. When press-conference moderator Henri Behar pointed out to Crowe, with respectful earnestness, that this was his first light comedy role in a long while, Crowe responded devilishly, "Well, there's a lot of laughs in 'Gladiator,' mate. You chop someone's head off the right way -- fuckin' funny!"

The hot festival ticket on Thursday night was a midnight public screening of "Borat: Cultural Learnings of America for Make Benefit Glorious Nation of Kazakhstan," starring comedian Sacha Baron Cohen. It was a ticket so hot, I couldn't get a hold of one. But as it turned out, as a colleague who attempted to attend this screening informed me, the projector broke down near the beginning of the movie, and Cohen -- who was in the house in the guise of Kazakh journalist and naif Borat Sagdiyev, the character he plays in the movie -- performed for a while to appease and entertain the crowd. Michael Moore, who happened to be in the audience, and who used to be a projectionist, went to the booth to see if he could help. Then the movie's director, Larry Charles (who made the brilliant and almost universally misunderstood "Masked and Anonymous") and Moore took the stage for an impromptu Q&A session. (The following night, Moore appeared at another event, where he showed clips from two works in progress, "Sicko," about the U.S. health-care system, and "The Great '04 Slacker Uprising," about Moore's efforts to galvanize young voters for the '04 election.)

But no amount of clever stalling could solve the projection problem, and the screening had to be rescheduled for Friday night. That may account for the crowd of critics and industry types who packed into a Friday midday press screening of "Borat." Borat Sagdiyev, one of the recurring characters on Cohen's "Da Ali G Show," is an inquisitive, sex-crazed TV journalist -- the "sixth most famous man" in Kazakhstan -- who manhandles the English language so mercilessly that he turns it into a kind of dada poetry. (He's given to jubilant announcements like "I made a sexy time with my mother-in-law!") He's been assigned by the state-run TV network to travel to America and report on the modes and manners of we the American peoples, and to make facetious upon us unintentionally with his unfamiliarity with our customs. That translates into, among other things, a bunch of surprisingly original scatological gags (it's not true that when you've seen one, you've seen them all) and a nude wrestling match -- between Borat and his rotund, goatee'd producer, played by Ken Davitian -- that approaches farcical genius.

In places, Cohen's sense of humor dips dangerously close to the frat-boy zone, and a large part of his shtick involves hoodwinking unwitting civilians. (It's unclear exactly how many of the regular folk appearing in "Borat" are completely unhip to the con, but it's also clear that these aren't professional actors.) We see Borat, newly arrived in New York City, attempting to kiss his fellow subway riders -- the male ones -- in greeting, flashing his cheesy wedge of a smile beneath a bushy black mustache as he introduces himself and asks their names. "My name is None of Your Fucking Business!" snaps one, in comically exaggerated faux-New York style. Other marks include a polite Southern woman who patiently explains to Borat the proper use of toilet paper, and a used-car dealer who has to break the news to him that a "chick magnet" isn't an actual part that can be installed in a vehicle.

Sometimes it's almost painful to watch Cohen score points off innocent people who are just trying to do the best they can by this aggressively friendly, grinning, English-mangling Kazakh; in his ill-fitting gray suit, he's a guy with "F" for "Foreigner" written all over him. Cohen's humor can make you feel complicit in an unclean act -- you might feel a twinge of guilt for laughing.

Then again, complicity is part of humor: The very things we're not supposed to laugh at are sometimes the funniest. And there are sections of "Borat" that constitute the most sharply pointed satire I've seen in years. Borat describes a tradition in his homeland, "The Running of the Jew," an event whose central figures are a man and a woman with giant papier-mâché heads (complete with horns). The woman squats in the street and lays an egg, and the village children descend upon it. Borat narrtes: "There you go, kids! Crush that Jew egg before it hatches!" And when Borat comes to America, his accoutrements include "a jar of Gypsy ears to prevent AIDS." Cohen's humor, at its best, brazenly questions the notion that we're not supposed to call people who cling to bizarre superstitions and prejudices "backward" because it's culturally insensitive. It's the kind of humor that's bound to get under people's skin -- which is precisely the point.

When Charlie Kaufman and Spike Jonze's "Adaptation" came out, I heard people talking about it in terms that were supposed to be glowing but which sounded pretty damning to me: "It really plays with narrative," they'd say, as if storytelling were a trifle to be toyed with. A new entry in the useless genre of movies that "play with narrative" is Marc Forster's "Stranger Than Fiction," in which Will Ferrell plays a tax auditor who begins hearing a voice-over narration in his head covering every aspect of his daily life, from the number of strokes he uses to brush his teeth to the way he places his watch on the nightstand before sleep. He panics when he realizes that the voice belongs to an eccentric, reclusive novelist (Emma Thompson) whose trademark is killing off her protagonists: He fears he's next.

"Stranger Than Fiction" is contrived to the point of being contorted and misshapen; its self-conscious fifth-dimension trippiness is like a bad tune you can't get out of your head. Still, I might have been slightly more tolerant toward it if I hadn't just seen "Syndromes and a Century," the new picture from one of my favorite young directors, Apichatpong Weerasethakul (who also, thankfully, goes simply by the name of Joe). "Syndromes and a Century" doesn't have the ghostly dreaminess of Joe's last feature, "Tropical Malady." In some ways, it's more straightforward: The movie's two chief settings -- an urban hospital and a rural one -- are more concrete than the spectral fairytale forest of "Malady," and there are (alas) no talking tiger-spirits.

This is such a gentle, delicate picture -- it's based on Joe's parents' recollections of their own early courtship -- that at moments, I felt as if it were slipping through my hands like water. But a full day after seeing it, I'm finding that its rippling multiple storylines -- there's a singing dentist who befriends a young monk, and a beautiful young doctor who inches tentatively toward love -- are still reshaping themselves in my mind. "Syndromes and a Century" is beguiling and confounding, and I hope to see it again soon: When I do, I suspect I'll understand it even less and yet love it more. That's the difference between a movie with a mystery in its heart, and one whose mystery is a gimmick you can take to market.