The Eddas -- epic sagas that form the core of Norse religion -- are best read under the ash trees in this Land of the Midnight Sun. 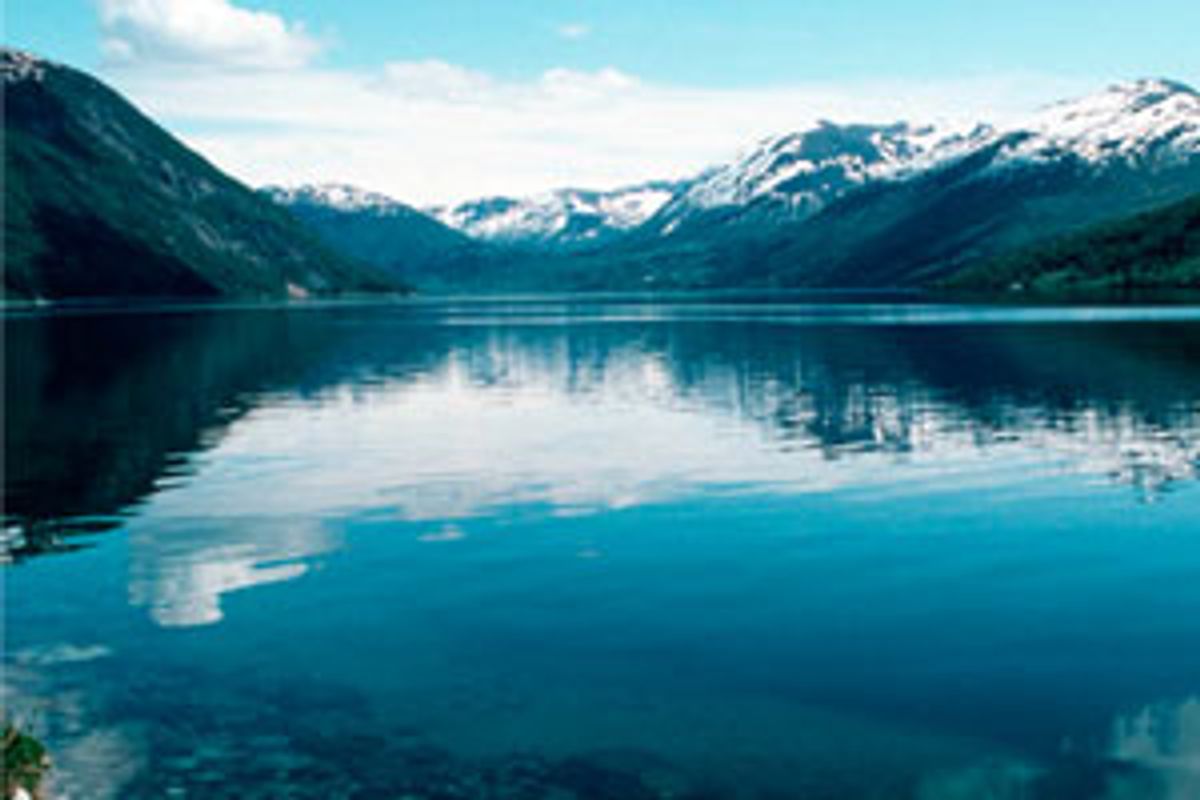 Norway's lands, like Hawaii's beaches, remain legally open to all. So it was that this spring, on my first visit to the ancestral homeland, my Norwegian editor, Jon Erik, could take me to an ancient burial mound on private land. A man was mowing the lawn. Jon Erik chatted with him for a moment, and then led me to a bulkhead door in the side of the hill; we might have been entering a New England potato cellar. The passageway was lined with stone. We went deep into the darkness to the central chamber; then Jon Erik activated the flashlight on his cellphone to show me the sad details of eternity. The vault was empty, the skeleton with its related artifacts having long since been removed to a museum, but Jon Erik said that on his uncle's property there also rose a mound, and his uncle was not going to let anybody open that one.

One of the things I love about Norway is the way that the past is so present. The Norwegian literature that allures me is equally past and present. Recently, I hired an artist's model to pose as the seeress in "Voluspá" (about which more momentarily), and as she lay there nude before me she began to recite from that ancient poem. It was as if someone in England had suddenly chanted some episode from "Beowulf," and in Old English.

"Voluspá" is a so-called Eddic poem. There are two Eddas, the Elder and the Younger. Like the sagas, these were written in Iceland, not in Norway, but they remain the core of the ancient Norse religion. In these collections, we read how Odin, king of the gods, cut out one of his eyes as payment for a drink of the knowledge-bearing waters of the Well of Weird, then gashed his side and hanged himself for nine days from Yggdrasil, the ash tree that supports our world and eight other supernatural ones. Rabbits are gnawing at Yggdrasil's roots. Someday it will fall and then the world will end.

In "Voluspá," the first poem in the Elder Edda, the seeress tells Odin the ghastly sequence of events through which the world will end. Odin will be devoured by the wolf called Fenris. His doom is inescapable. But the fatalism of the Eddas requires him to accept it and fight a hopeless battle against it all the same. I sense this quality in Norwegians even now. There is an admirably unsentimental toughness to these people. We all know how life ends; we will lose everything. In the meantime, we can, if we choose, proudly and uncomplainingly resist the inevitable. Eddic heroes such as Sigurth, and heroines such as Guthrún and Brynhild -- all three of whom appear in slightly altered forms in Richard Wagner's "Ring" cycle, by the way -- exemplify this mode, which is noble, ruthless and sometimes appallingly cruel. Lesser Eddic protagonists tend to be sleepwalkers drifting helplessly toward unchosen dooms, but they usually make a good showing at the end.

I love to wander through Norway's ash trees seeking Yggdrasil. It is also thrilling to stand above the tree line and gaze at glowering ice-clad precipices, thinking of the Eddic realm called Jötunheim, Land of the Frost Giants. These enemies of gods and humans are, of course, implicated in the approaching destruction of our world. In the meantime, they sometimes get the better of the gods; often, the gods, especially Thor and Loki, get the better of them. When reading these passages I feel that these poems and tales must have been composed in times when winter occasionally overwhelmed a household and murdered everybody in it. I sit beside a brook in spring, drawing Yggdrasil, and suddenly the breeze turns cold and I shiver, knowing that these leaves must drop and the snow must come. Eddic protagonists live, if you like, in balance with nature, meaning that they cannot take summer for granted. Knowing this makes a Norwegian summer all the more beautiful.

The best English-language edition I know of the Elder Edda is Lee M. Hollander's, who sought to make his language as faithful as he could to the Old Norse. His rhythms do not always scan easily on first reading, and he uses such archaisms as "etin" for "giant." The Eddic device of referring to someone through his effects on others (thus, Thor might be mentioned simply as "bane of etins") requires numerous footnotes, and so Hollander's work conveys nothing so much as forbidding obscurity. I urge the reader to persevere: These references make up a closed system, and it is not very long before one masters them. The Elder Edda continues to overawe me with its beautiful darkness.

The Younger Edda is more specialized, being in fact a how-to guide for Norse wordsmiths. The first part of this work, however, tells certain myths not present in the Elder Edda, and elaborates on others.

For readers who prefer their heroes and characters to be a little more introspective, ambiguous, modern, I cannot wholeheartedly enough recommend the two great novel cycles of Sigrid Undset, "Kristin Lavransdattar" and "The Master of Hestviken." Undset was a devout Roman Catholic who lived in Lillehammer, site of the Norwegian Olympics in 1994. I have visited her home, which will soon be open to the public, and a brief inspection of her bookshelves showed me that her mind was not only Catholic but catholic in the other sense of the word, all-encompassing. If an Eddic protagonist lives out the agony of proud defiance to doom, Undset's characters live out the ever-repeated conflict between the spiritual and the material. One need not be Catholic (I am not) to be utterly caught up in Undset's imagined medieval Norway.

Kristin Lavransdattar's three novels (1920-1922) follow their eponymous heroine from her early childhood to her death from the Black Plague. It is one of the greatest love stories ever written, because it is one of the truest. For the sake of a man, Kristin sacrifices a great deal that she values, including her purity, her honesty and her obedience to her father, who is one of the most lovingly delineated characters in literature. She finally marries her sweetheart, only to learn that he and she cannot make each other happy. But Undset manages to convince us that if happiness will not be hers, perhaps she has won something similar to the treasure of an Eddic heroine: a destiny, a doom, that simultaneously fulfills and befits her. At the end, one feels that she could not have lived her life in any other way, with any other man.

"The Master of Hestviken" (1925-1927) is also a love story of sorts. The hero of this tetralogy is a friendless orphan named Ølav who cleaves only to his foster sister, Ingunn, a weak-willed, sickly girl to whom he was betrothed by his dying father. When the young couple are parted by violent legal difficulties, Ingunn has a fling with an Icelander and gets pregnant. To save her honor, Ølav kills the seducer, marries Ingunn and gives out that the child is his. All his life he longs to confess the manslaughter and do penance for it, but first Ingunn pleads with him not to, and then later, after she has suffered a long and ghastly death, he feels a mixture of duty to Ingunn's memory and revolted pity for the bastard, who adores him; and so the years go by, until this faithful, loving, bravely steadfast man has been utterly eaten up by his unshrived sin. Every time I reread this book I try to find the place where Olav "went wrong," and I cannot. This work reminds me of Sophocles -- or, better yet, of the old Norse sagas, whose heroes are simply "fated" to do what they do. Indeed, Undset's Norway retains its Eddic dwarfs, elf temptresses and mountain dwellers. Even Odin and the death goddess Hel get mentioned. And both Kristin and Olav are Eddic in their uncomplaining bearing of destiny's burden.

Lillehammer is a beautiful place of water and forest. A reader can, if he likes, retrace Kristin's penitential pilgrimage to Nidaros or seek out landscapes that Olav would have seen. The people of Lillehammer are proud of Sigrid Undset, and their literary festival is named after her. Her books are moving and engrossing to read anywhere; but they are a particular pleasure to read here.

In other parts of Norway, one can find runes and petroglyphs graven into the rock. In those spots (or, if you like, atop a grassy old barrow, or in a meadow of ring stones), a fine way to pass a warm afternoon is to sit browsing and dreaming through a volume of the inexhaustible Eddas.

William T. Vollman is the author of "You Bright and Risen Angels," "Whores for Gloria," "Rising Up and Rising Down" and most recently "Europe Central," winner of the National Book Award.