Bush's Get Out of Jail card

Military attorneys claim that a White House-backed bill would gut the Geneva Conventions and save alleged torturers from prosecution. 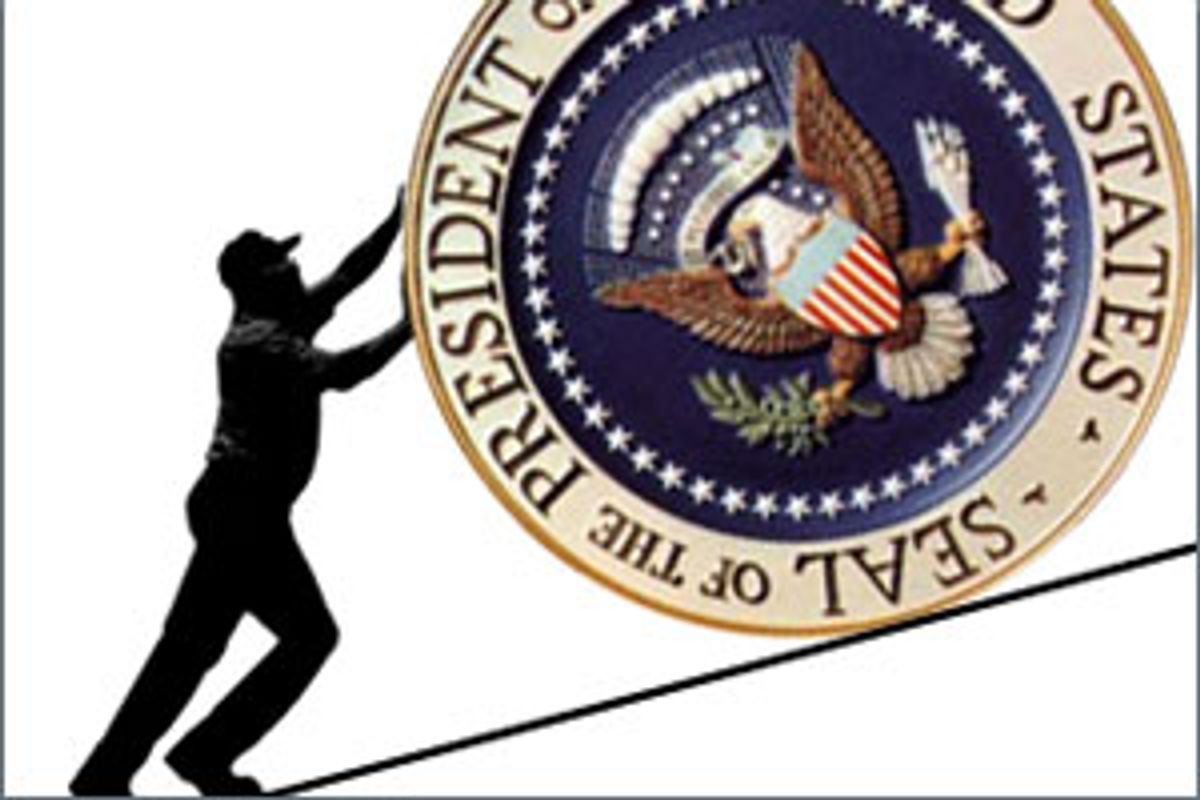 When he announced last week that he would be transferring 14 alleged al-Qaida terrorists from secret prisons to Guantánamo Bay, Cuba, and that the "tough" interrogation methods employed by the CIA had pried loose valuable intelligence from the suspects, President Bush also unveiled a bill to set up military tribunals to try the prisoners. The House is expected to vote on the bill next week, and Senate Majority Leader Bill Frist, R-Tenn., has already introduced Bush's plan in that chamber.

Some observers, however, say that the bill does much more than establish tribunals, and that its true impact is not fully appreciated. Among other things, the White House is seeking to ensure that the Geneva Conventions are no longer an enforceable standard for the United States in the conduct of war. "This is huge," said Elisa Massimino, Washington director of Human Rights First. "It will be viewed as a rejection of the baseline standards for treatment under the Geneva Conventions."

Now a group of retired military officers is readying a letter to the president that articulates serious objections to Bush's proposal. In an exclusive interview with Salon, the former military attorneys, or judge advocates general, claimed that the legislation would condone abusive interrogations of the sort that were prohibited by the Supreme Court's recent Hamdan decision, and largely gut the War Crimes Act of 1996, a law that gives U.S. courts the authority to convict Americans for Geneva Conventions violations. The bill, the attorneys claim, would endanger U.S. troops who are held prisoner and further erode the stature of the United States in the international community.

Bush's bill would allow CIA interrogators in a special program to employ what Bush has called "tough" interrogation techniques that would otherwise contravene the Geneva Conventions. In the past, those CIA interrogators have reportedly subjected suspects to simulated drowning, prolonged isolation, slapping, sleep deprivation, reduced food intake, and exposure to light and loud sounds.

Some retired officers argue that the White House is fundamentally wrong about the effectiveness of tough interrogations. They say such techniques guarantee unreliable and often faulty intelligence. Retired Lt. Gen. Claudia Kennedy, the former Army deputy chief of staff for intelligence, called Bush's arguments to the contrary "a profound misunderstanding on the part of this administration."

President Bush claimed last week that stubborn al-Qaida suspect Abu Zubaydah cracked and identified an alleged accomplice in the 9/11 attacks, Ramzi bin al Shibh, after his capture in the spring of 2002, when the CIA employed the "tough" techniques against him. A report on Sunday in the New York Times said Zubaydah may have handed over his good information during earlier conventional interrogations by FBI officials who did not resort to abuse, and that he became uncooperative when faced with "tough" tactics.

Kennedy speculated that the administration's interest in harsh interrogation tactics has more to do with getting even and less to do with smart warfare. "Torture is not really to get information," Kennedy explained. "Torture is really more about punishment."

But in addition to raising serious questions about efficacy, the retired military officers also argue that Bush is putting U.S. troops at risk for a CIA program with illusory value. Detainee abuse may actually provide current or future enemies with a pretext to torture captured American troops. "If we get a solid reputation for being inhumane and cruel, people will take it out on us," Kennedy worried. "So I think it does put soldiers at risk."

Worse, the United States' reputation is likely to further erode on the international stage, undercutting American prestige and stoking the anti-American sentiment that fuels terrorism. "For generations, the United States has been a world leader," lamented Hutson. "If we take the low road and take shortcuts, we lose what I think is a very critical leadership role for the United States to play. I think this is one of the issues that is important enough to the retired military community that we will speak out about it."

The retired officers said they are concerned, among other things, with how the White House is trying to bury some protections in the Geneva Conventions. A combination of provisions contained in the White House legislation effectively sidesteps Common Article 3 of the Conventions, which bars "outrages upon personal dignity, in particular humiliating and degrading treatment." The president has called that protection too "vague," but his detractors say that by scuttling it, the CIA can continue with the "tough" interrogation procedures advocated by the president. Scott Silliman, a professor at Duke University School of Law who specializes in national security, said the White House is trying to "defeat Common Article 3 with respect to what the president wants to do."

The White House is also seeking to roll back the ability to enforce the Geneva Conventions in U.S. courts that was established in the GOP-sponsored War Crimes Act. In the White House legislation, this effort is unambiguous. "No person in any habeas action," it states, "or any other action, may invoke the Geneva Conventions or any protocols thereto as a source of rights, whether directly or indirectly, for any purpose, in any court of the United States or its states or territories."

Instead of making the Geneva Conventions enforceable as the 1996 law established, the White House has proposed amending the War Crimes Act by instead making a list of specific actions in war illegal, including torture, cruel or inhuman treatment, murder and rape. The White House bill is retroactive. And here, the administration has tried a sleight of hand that would help keep actions by the CIA, the Justice Department or the Pentagon out of court, Silliman explained. Though the administration says in its bill that acts of cruel or inhuman treatment can be tried in U.S. courts, the bill lifts the definition of "torture" from existing U.S. code and pastes it into Bush's proposal where the bill outlaws "cruel or inhuman treatment."

That would make it harder to prosecute administration officials, Silliman claimed. The bill is retroactive, and once the Geneva Conventions are bypassed, much of what has transpired under CIA and Pentagon interrogations probably would not qualify as torture under the other, non-Geneva definitions in the federal code. "If you look at the CIA folks or what [Secretary of Defense Donald] Rumsfeld has approved, when interpreting cruel and inhuman treatment," said Silliman, "it is a very high standard. It is basically torture."