Hack the vote? No problem

Diebold, the e-voting-machine maker, has long sworn its systems are secure. Not so, says a new Princeton study. Converting votes from one candidate to another is simple. 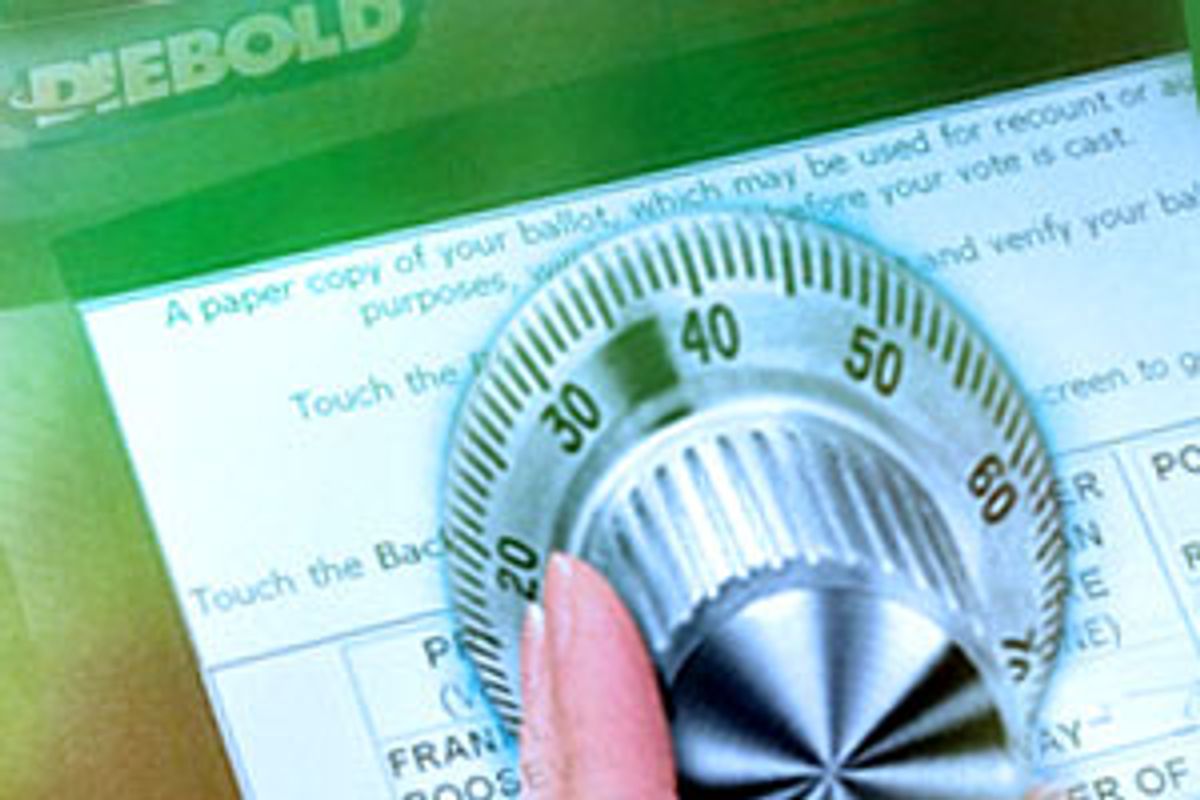 Having reported extensively on the security concerns that surround the use of electronic voting machines, I anxiously awaited the results of a new study of a Diebold touch-screen voting system, conducted by Princeton University. The Princeton computer scientists obtained the Diebold system with cooperation from VelvetRevolution, an umbrella organization of more than 100 election integrity groups, which I co-founded a few months after the 2004 election. We acquired the Diebold system from an independent source and handed it over to university scientists so that, for the first time, they could analyze the hardware, software and firmware of the controversial voting system. Such an independent study had never been allowed by either Diebold or elections officials.

The results of that study, released this morning, are troubling, to say the least. They confirm many of the concerns often expressed by computer scientists and security experts, as well as election integrity activists, that electronic voting -- and indeed our elections -- may now be exceedingly vulnerable to the malicious whims of a single individual.

The study reveals that a computer virus can be implanted on an electronic voting machine that, in turn, could result in votes flipped for opposing candidates. According to the study, a vote for George Washington could be easily converted to a vote for Benedict Arnold, and neither the voter, nor the election officials administering the election, would ever know what happened. The virus could also be written to spread from one machine to the next and the malfeasance would likely never be discovered, the scientists said. The study was released along with a videotape demonstration.

"We've demonstrated that malicious code can spread like a virus from one voting machine to another, which means that a bad guy who can get access to a few machines -- or only one -- can infect one machine, which could infect another, stealing a few votes on each in order to steal an entire election," said the study's team leader, Edward W. Felten, professor of computer science and public affairs at Princeton.

The Princeton study is the first extensive investigation of the Diebold AccuVote DRE (Direct Recording Electronic) system, which is employed in Maryland, Florida, Georgia and many other states. Such touch-screen voting systems made by Diebold will be in use in nearly 40 states in this November's elections.

Felten and a small group of Princeton computer scientists implanted a nearly undetectable virus in a Diebold voting system. They managed to alter a voter's ballot -- after it had already been confirmed and cast -- and flip a vote to a candidate other than the one the voter had intended. As Felten explained, "We've also found how malicious code could also modify its own tracks [afterward] and remain virtually undetectable by elections officials. It wouldn't be found in the standard tests performed either before or after an election."

The Princeton report shows that a virus could be inserted onto a Diebold voting system by a single individual "with just one or two minutes of unsupervised access to either the voting machine or the memory card," which is used with the system to store ballot definitions and vote tabulations.

The question of unsupervised access to voting systems has long been at the core of the debate over the use and security of electronic voting machines. That debate reached a boiling point in California's June election, when programmed, election-ready Diebold voting machines were discovered to have been sent home overnight with poll workers on so-called sleepovers, in the days and weeks prior to the election, by San Diego County's registrar of voters. Poll workers in the county, and many others around the country, are given voting machines by elections directors to keep at home prior to the election. They are then deployed on election morning at polling sites. The vulnerabilities to hacking, however, in the newer electronic voting systems have made that practice a topic of great concern. Earlier this year the federal certification body for e-voting systems issued a memorandum requiring greater security for such systems.

As a result of the security breaches via the voting machine "sleepovers" in San Diego County, the special election between Francine Busby and Brian Bilbray for the House seat of jailed Rep. Randy "Duke" Cunningham was contested by voting rights advocates. The legal suit charged that unrestricted access to the machines by poll workers compromised the election and violated both state and federal law.

David Jefferson, a lead voting systems technology advisor for the California secretary of state and a computer scientist at Livermore National Laboratory, told "The PBS News Hour" just after California's primary election, "You can affect multiple machines from a single attack; that's what makes it so dangerous."

Jefferson's comment was based on a report by independent computer scientist Harri Hursti and the firm Security Innovation after a recent test of the systems in Emery County, Utah. Last March, the experts gained access to a Diebold touch-screen system in the county. Their report revealed that a "feature" built into Diebold's touch-screen system could allow an individual to overwrite the election software, operating system and computer firmware with just a minute or two of unsupervised access to the machines -- no password necessary.

Electronic voting systems such as those made by Diebold and a handful of other private corporations now dot the nation's electoral landscape. While virtually all of the systems currently set for use this November have been found to be vulnerable to hacking, tampering, inaccuracy and error, various elements of the Diebold voting systems have found their way into more independent hands-on investigations. A recent landmark report issued by New York University's Brennan Center for Justice detailed some 120 threats to e-voting security across all such systems.

The computer scientists and security experts who issued the Emery County report have not been alone in pointing out vulnerabilities in the Diebold touch-screen system. Johns Hopkins computer scientist and elections-security expert Aviel Rubin was one of the original voices to declare the dangers of Diebold's systems. He analyzed source code from its voting machines that was left, by the company, unsecured on a public Internet site. He recently told Newsweek: "If Diebold had set out to build a system as insecure as they possibly could, this would be it."

Diebold has repeatedly disputed the findings then as speculation. But the Princeton study appears to demonstrate conclusively that a single malicious person could insert a virus into a machine and flip votes. The study also reveals a number of other vulnerabilities, including that voter access cards used on Diebold systems could be created inexpensively on a personal laptop computer, allowing people to vote as many times as they wish.

Diebold spokesman David Bear did not return Salon's calls for comment on the Princeton study. In the past, he has denied that such security concerns are notable.

"[Our critics are] throwing out a 'what if' that's premised on a basis of an evil, nefarious person breaking the law," Bear told Newsweek after the March Emery County study. "For there to be a problem here," he further explained to the New York Times, "you're basically assuming a premise where you have some evil and nefarious election officials who would sneak in and introduce a piece of software  I don't believe these evil elections people exist."

While previous reports on security in electronic voting systems examined a limited set of vulnerabilities, the Princeton study looked at the entire voting machine system over an extended period. "These are, by far, the most serious electronic vulnerabilities that have been published to date," Felten said.