How Britons came to hate Tony Blair and America, and why the next prime minister will pay the price. 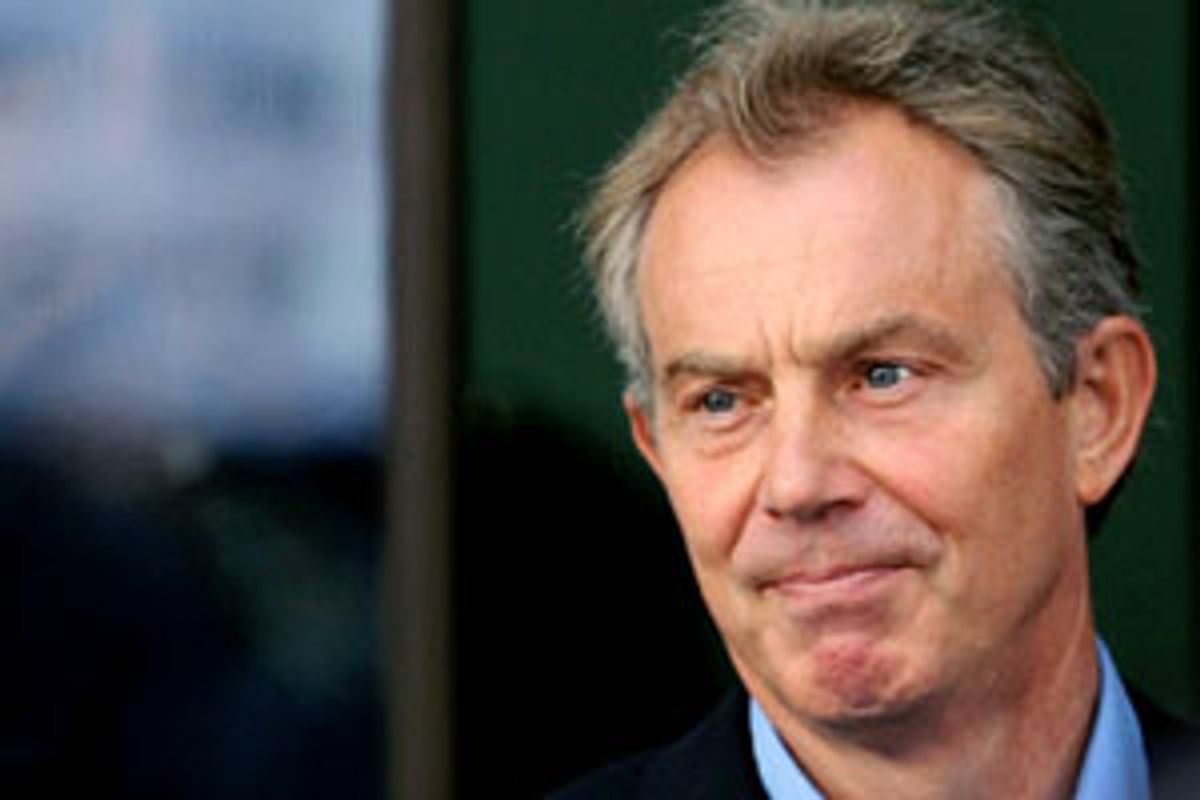 In any disintegrating relationship there are moments of very loud, raw silence. Things have been said that can never be taken back, but their consequences can't be taken in either. Just so, the calm in the United Kingdom's Labor Party this week, after it became clear that Tony Blair is finished. It is still overwhelmingly probable that his successor will be the chancellor of the exchequer, Gordon Brown, but the exposure of the party's internal hatreds has made it much less likely that Brown will win when he stands for election as prime minister on his own.

This is unfair. As the man in charge of the economy for the past 10 years, Brown can argue that all the real successes of the Blair government were his, and all the failures Blair's. But Blair had the success that really mattered: He got elected. And Iraq, his one great failure, will probably sweep Brown away just as it has destroyed Blair, because it has brought out an extraordinary resentment of America here. Whoever is in power will be tied to the American wars in Iraq and Afghanistan, and they will be the victims of this growing antipathy when the election comes.

Until the invasion of Iraq, the people who hated Blair were mostly outside the Labor Party. He never had a majority of the voters behind him -- even in his greatest triumph, in 1997, he won a huge majority of 197 seats in Parliament with only 43 percent of the popular vote -- but the only people who actively hated him were traditionalists, whether on the left or the right. The hatred of the traditionalist Labor voter was precious to Blair. You might argue -- and I think his circle believed -- that what made him electable after 18 years of Tory rule was that he was known to be despised by everyone who believed in paleo-Laborite socialism and thought Thatcherism should be rolled back.

The hatred of traditionalist Tories -- the sort of people, in fact, with whom he had gone to school -- he could ignore. He trampled over tradition of every sort, castrating the House of Lords, abolishing -- with 48 hours' notice -- the office of the lord chancellor, who had been head of the judiciary for at least a thousand years, banning fox hunting, and in general continuing Thatcher's contempt for the professions and the civil service.

But none of this mattered until the invasion of Iraq. The invasion was opposed by the left, of course, who had always hated Blair. But it also alienated large sections of the Tory Party and brought anti-Americanism from the fringes of British politics into the center.

Anti-Americanism had always existed among the groups that hated Blair anyway. Though it wasn't much of a political force before Iraq, the left's hostility to American imperialism hardly needs rehashing. The old right, meanwhile, took the view that if anyone had to run an English-speaking empire, it should be the English.

Now there is something thin and horrible in the burgeoning hatred of America that reminds me of the itching resentment that Ulster Protestants harbor toward England. In both cases, it stems from the difficult realization that we are part of someone else's empire, whether or not it is benevolent.

Up until 2003, it probably would have seemed incredible to most British voters that we were part of someone else's empire. The Iraq war, and the lies that were told to get us into it, have made it clear that we are -- and have delivered a prolonged and almost unendurable humiliation for which Blair will always be blamed and for which Bush will always be hated. In a poll before the 2004 American election that asked Britons whether they preferred Bush or Kerry as president, only 16 percent chose Bush. After the election, the Labor tabloid Daily Mirror ran the headline "How can 59,054,087 people be so DUMB?"

As soon as the Conservative Party elected as its leader David Cameron, a man too young to be tainted with Thatcherism, Blair's days were numbered. Cameron wrote much of the very pro-American Conservative manifesto at the last election and must therefore take some responsibility for the failure of the Conservatives to capitalize on Blair's unpopularity. But since then he has navigated shrewdly to put Blair between himself and Bush. On the anniversary of 9/11 he delivered a speech that was widely considered to be a repudiation of neoconservatism. Of course, this doesn't actually mean distancing himself from Washington -- how many neocons will be found there in 2008? -- but it does show clearly what must be done to get yourself elected in Britain today. That Thatcher was at the same moment in Washington offering her support to Bush won't have harmed Cameron at all.

Cameron seems to share some of Blair's chameleon qualities. Like Blair, he appears to be an authoritarian who cares nothing for tradition -- someone right-wing, perhaps, but not in the least conservative. He doesn't appear to have Blair's breathtaking gift of sincerity, which allows Blair to believe whatever he's saying, no matter what he's saying. Cameron, like Gordon Brown, seems to know when he is telling lies.

Or at least we think we know that Gordon Brown knows when he is telling lies. The next prime minister -- the man who will probably be prime minister by Christmas -- remains a mystery. He is powerful, secretive, famously bad at appearing human. Blairites hate him, and his acolytes hate them back. He believes that Blair promised him an early, orderly succession way back in 1994 and that this promise has been repeatedly broken.

Last week, as Labor teetered on the edge of civil war, Charles Clarke, who was sacked by Blair as home secretary in the spring, denounced Brown in two conservative newspapers as someone who "lacks confidence. He is nervous." This goes back to an old Blairite complaint that Brown is a vicious, cowardly control freak. No one in the Conservative Party could possibly loathe Brown as much as his enemies in the Labor Party do. He is still almost certain to win any election among Labor members once Blair has gone. But the longer Blair stays, the more bitter and damaging that election will be. At the moment the smart money is suggesting a succession in the spring. I am not so sure. If the Labor MPs panic and conclude that they have more to fear from Blair's staying in power than from a bloody coup, he will be gone more quickly than that, and it will not be tidy.

The Conservatives were rendered unelectable for a full decade by their seething, rancorous hatred of Europe, which was Thatcher's legacy and which drove the party into a civil war. Labor may choose to destroy itself over the question of anti-Americanism. The joke is that in both cases, all that is at stake are gestures. What else can we do with our economy but trade with Europe? What else can we do with our army but fight as American mercenaries? Perhaps Blair's real failure was not that he offered his services to the White House, but that he never charged enough.