Ann Richards and I saw everything on Broadway and loved to rag about George W. Bush. They were some of the happiest years of my life. 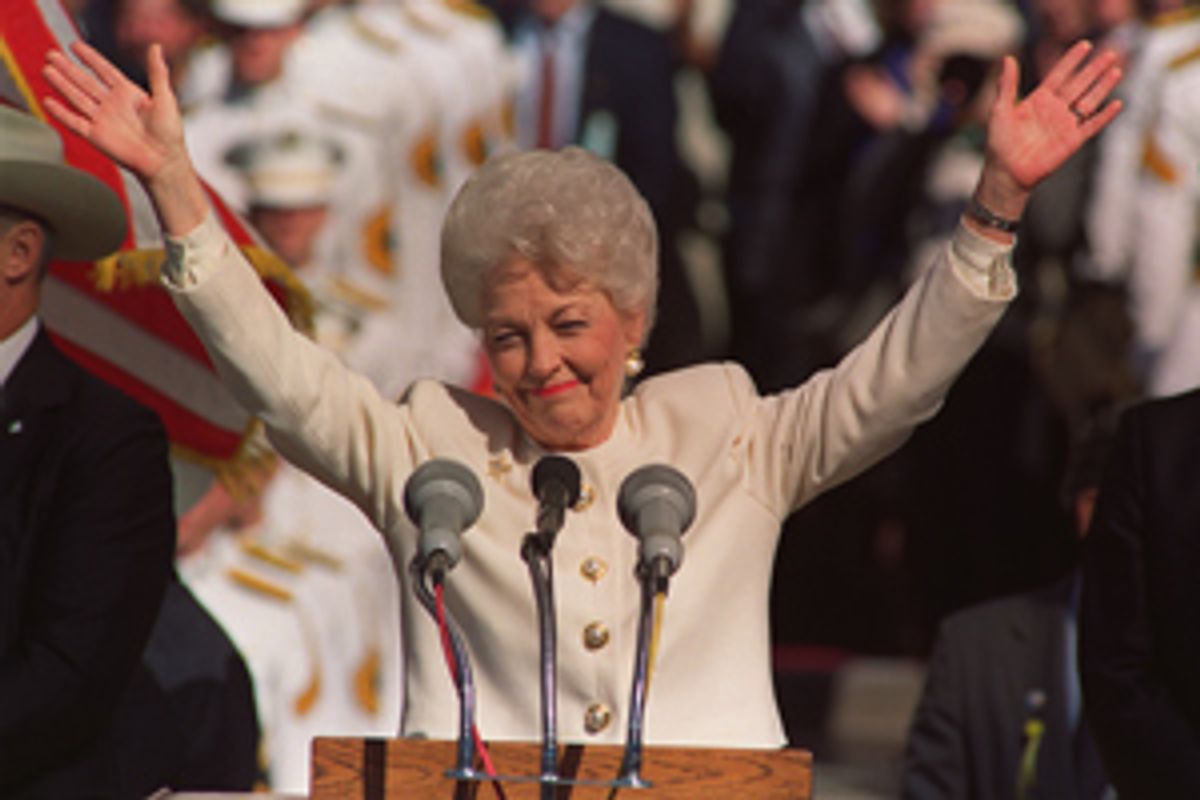 "It is impossible to experience one's own death objectively and still carry a tune," said Woody Allen.

This is also an Ann Richards thought if ever there was one. Ann always said she couldn't carry a tune, but her one-time aide Sandra Castellanos recalls that whenever she started to sing "Zip-a-dee-doo-dah, zip-a-dee-ay!" Ann would always burst out of her office and finish it with a flourish: "My, oh my, what a wonderful day."

I recall now a glorious moment onstage at the St. James Theatre when Ann and I appeared as "cowgirls" in a musical number for the Broadway benefit to help the Women's Health Initiative of the Actors' Fund. We came out in ridiculous garb with huge brown felt chaps, hats, boots, the works. We were later castigated by the New York Times critic as women who could neither sing nor dance. What did they know? Ann and I thought we had done great imitating Lucille Ball and Vivian Vance performing "I'm an Old Cowhand From the Rio Grande." In our patter I blamed Ann for George W. Bush's rise and her failure to stop him. She said, "That's not funny, Liz!" and shot me with her cap pistol.

The Democratic Party and thousands of admirers, public and personal, took a big hit on Wednesday night. As you know, our friend Ann died after a six-month bout with esophageal cancer. She had been in and out of M.D. Anderson hospital in Houston and they had pronounced her cancer gone. But even the mighty, the feisty and the brilliant Ann couldn't come back from this terrible illness. She left this world only blocks from the big white mansion in Austin where she had been such a successful and unusual governor of Texas from 1991 to 1995. The combination of Karl Rove and George Bush put her out of office in 1995. She became a famous speaker and fundraiser for the Democrats but refused to run again herself. Many people urged her to try for the presidency, but Ann said she needed to make some money. "I don't want to end up living in a trailer parked in my daughter's driveway in Austin."

Bette Midler just called to tell me the New York Restoration Project will plant a huge tree in the city in Ann's memory. "Not one of those little mangy $100 ones either," said the heartbroken Bette. I am under an avalanche of condolences now and will offer them to Ann's devastated family -- her attorney sons, Dan and Clark, her wonderful social worker daughter, Ellen, and her eldest, Cecile, who is now the head of Planned Parenthood in New York. Ann had many grandchildren, and she was surrounded by them and by friends like the writer Bud Shrake, who was her main man, and Jean and Dan Rather, Ladybird Johnson, Liz Carpenter, Molly Ivins and others during her brief illness.

It is a shock to lose Ann, who was always so concerned about her health and that of her pals; she was an exercise and good nutrition fanatic and often made jokes about my careless ways, telling people that I ate only from the brown and white food groups.

The five years that Ann spent in New York working for Jack Martin's Public Strategies advisory group were some of the happiest of my life, since I got to introduce this wonder woman to everybody in Manhattan.

When Ann came here to live five years ago, Le Cirque gave her a party and 600 admirers, including Bill Clinton, welcomed her. Ann and I worked some charities together and we saw everything that opened on Broadway. (The theater should shroud its lights on the Monday night of her funeral because she was its greatest fan and supporter. How well I remember intermissions where hosts of people came to touch her, talk to her and try to sit in her lap. It was like being out with a rock star to be with her in public.)

The election year of 2008 will be much dimmer without Ann, stumping with humor, sarcasm, a high intelligence and a combative manner for the Democrats. And I am unable to express how diminished those of us who really knew and loved her feel. She was young at heart, truly beautiful, comic, serious, dedicated, loyal -- a champion for women, for minorities and for common sense.

Only recently when I asked Ann her point of view about granting some kind of amnesty to illegal Latins in the United States, she just laughed: "They better grant them some way to stay here because otherwise our hospitals and nursing homes will never have the staff to take care of all of us who are growing older. The people caring for me at Anderson are almost all Mexican, Dominican, Puerto Rican, and they are simply wonderful."

This was the last thing Ann ever said to me -- typically caring, penetrating, socially observant. So goodbye to one of the most fabulous women I've ever known. Ann, it was a great privilege to be your friend!