Why did former Gov. Kean, once a respected statesman, mislead the public and the press about the accuracy of ABC's "Path to 9/11"? 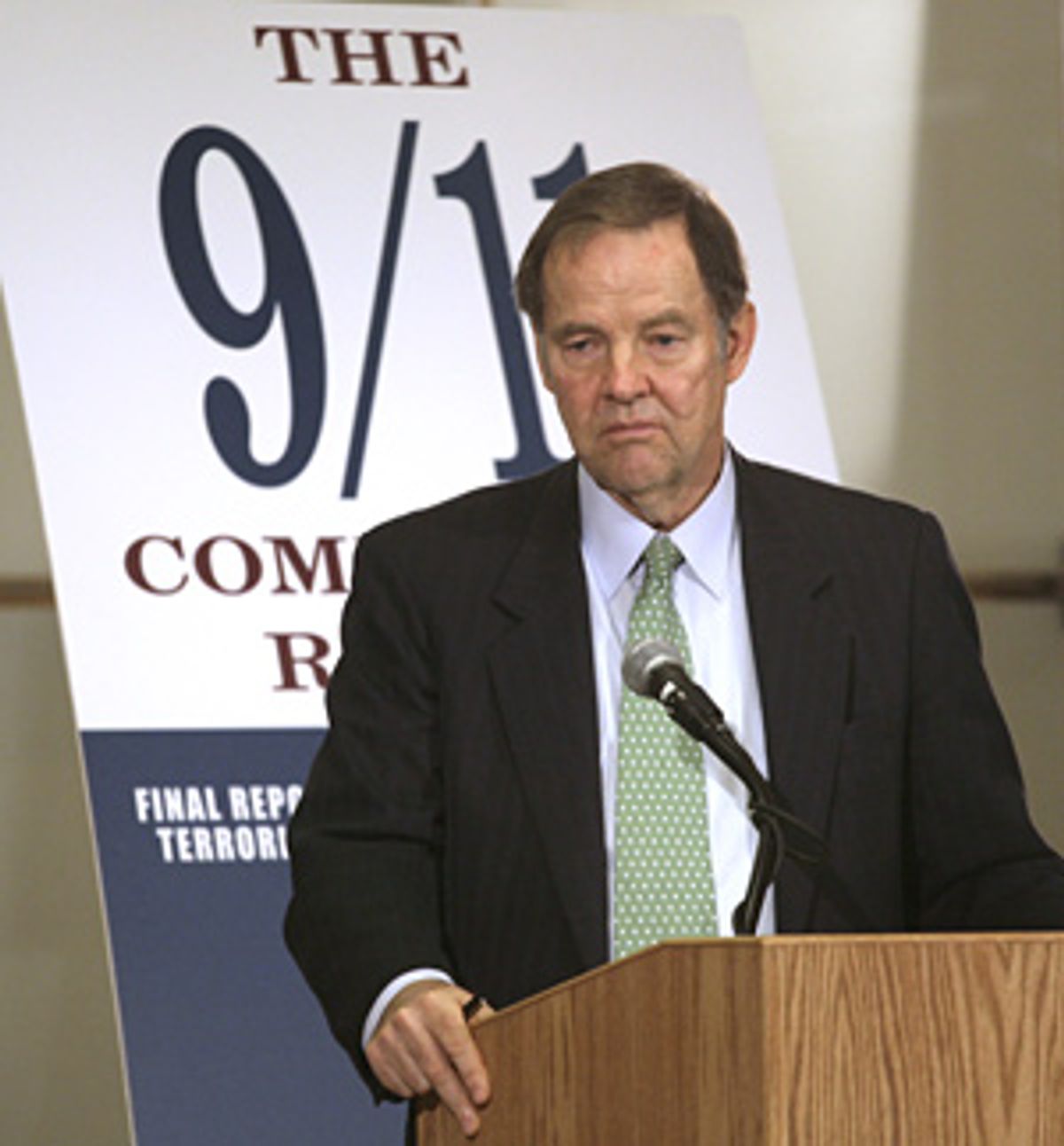 Until very recently, Tom Kean Sr. was one of the most admired figures in American public life, having garnered praise for bipartisan fairness and dedication as co-chairman of the 9/11 Commission. As governor of New Jersey and later as president of Drew University, he enjoyed friendships and support across party lines, building his reputation as a gentleman and statesman who cared more for policy than politics. He seemed to have achieved great popularity for the best of reasons.

But now, in the aftermath of "The Path to 9/11" -- the heavily fictionalized and politically distorted docudrama that he served as a paid advisor for and publicly defended -- it is becoming sadly obvious that his integrity was overrated. For money and a moment of Hollywood glitz, he sold out what should have been the crowning achievement of a career in public service.

By signing up as an "executive producer" of the ABC miniseries -- for a fee he still refuses to disclose -- Kean rented his good name to a right-wing Hollywood cabal seeking to malign Bill Clinton and exonerate George W. Bush, with blatant disregard for the facts uncovered by the commission at taxpayer expense. He still has not explained why he never asked the producers to honor the bipartisan nature of the commission's work, which they might have accomplished by hiring a Democratic commissioner to vet their script. He has not explained why he approved a script and a movie that simply invented (and sometimes improvised) scenes to tar Clinton and to puff up Bush. Nor has he explained why he, as an educator, promoted this confection of historical fraud to high school teachers across the nation.

Thanks to his supposed probity, Kean became the leading witness for the purportedly benign intentions of the film's producers. Back in July, after ABC screened "The Path to 9/11" for members of the Television Critics Association, he fielded the critics' questions on a panel that included scriptwriter Cyrus Nowrasteh, director David Cunningham and producer Marc Platt. According to the July 19 transcript of that session, he repeatedly made false and misleading comments to bolster the production's credibility.

Asked whether he was "totally happy with the miniseries" or whether there was "anything you'd still like to change about it," Kean replied: "Little changes here or there maybe, but, look, the spirit of this is absolutely correct. This is the story of how it happened." He went on to say that he and Nowrasteh had been "talking almost since day one," while Platt lauded him as "the guardian of accuracy ... [who made sure] we stayed accurate in our dramatic portrayal and that we communicated the true events and the essence of the report, the essence of the events as they occurred."

Nowhere does the 9/11 Commission report make that bald assertion -- and as the controversy over the film escalated, Kean backed away from his confident assertions of "accuracy." In a conference call with journalists the week that the movie aired, he admitted that portions of the script had been based on sources other than the commission's report -- which meant that he and the producers had misled the public and the press from the beginning.

Whatever the reason behind his behavior, whether partisan or pecuniary or both, the ABC controversy revealed certain aspects of his character that had previously been hidden. From now on, Tom Kean will be seen under the same bleak light as any other hustler coming down the Jersey Turnpike. With his son Tom Kean Jr. running for the U.S. Senate against Democratic incumbent Bob Menendez, the harsh scrutiny can be expected to intensify.

Actually, that process was already under way during the months that led up to the airing of "The Path to 9/11."

Since Kean's retirement as president of Drew University, his chief occupation is sitting on various corporate boards, including major financial firms such as CIT Group and Franklin Resources, Pepsico and the huge insurance firm known as United Health Group. He has sat on United Health's board since 1993 -- where he seems to have filled the same role of useful idiot that he played for the ABC producers.

For the past several months, the Securities and Exchange Commission has been investigating the conduct of United Health's management and directors. So have the Internal Revenue Service and prosecutors in the U.S. attorney's office for the Southern District of New York, who have subpoenaed documents from the company. The investigations came to light after a series of probing stories in the Wall Street Journal last May, which exposed the apparent backdating of hundreds of millions of dollars' worth of stock options by United Health management.

Those alleged manipulations, inflating the value of options granted to the company's management, evidently occurred with the connivance of the directors, including Kean, who sat on the company's compensation committee during three crucial years, according to the Journal.

Whether the backdating of the United Health options was legal or not, the failure to disclose those actions to stockholders and the public was probably illegal. The company has since been forced to restate its earnings by nearly $300 million, causing a plunge in the stock's value, and the directors have announced an internal investigation of the scandal. Meanwhile, major shareholders have filed lawsuits accusing Kean and the other directors of failing in their fiduciary duty.

Was Kean gullible, irresponsible, stupid or negligent? Perhaps we will learn when he is put under oath. As financial journalist Andy Serwer said on CNN when the Journal story broke, "These guys just sort of look crooked." Kean never seems to have noticed, and it is worth mentioning that his own compensation as a United Health director in 2004 reached $650,000 -- much higher than average for corporate directors, especially since he missed nearly a quarter of that year's meetings.

Kean doesn't quite seem to comprehend how badly he has compromised himself at United Health, since he continues to behave inappropriately. Last month the Journal reported that several top United Health executives and their spouses donated more than $20,000 to Kean Jr.'s Senate campaign at a fundraiser in Minnesota last May -- held on the same day that Kean Sr. and the other company directors met to consider how they would handle the burgeoning backdating scandal. When the Menendez campaign pointed out this gross conflict of interest, a Kean campaign spokeswoman claimed that the nexus of board meeting and fundraiser was only "a coincidence." The Keans' Republican supporters roared with outrage that anyone would dare to question the former governor's honesty and judgment.

They had better get used to it.