The Texan who actually governed

Karl Rove's cutthroat tactics eventually defeated her, but not before Ann Richards made a huge impact on American politics. 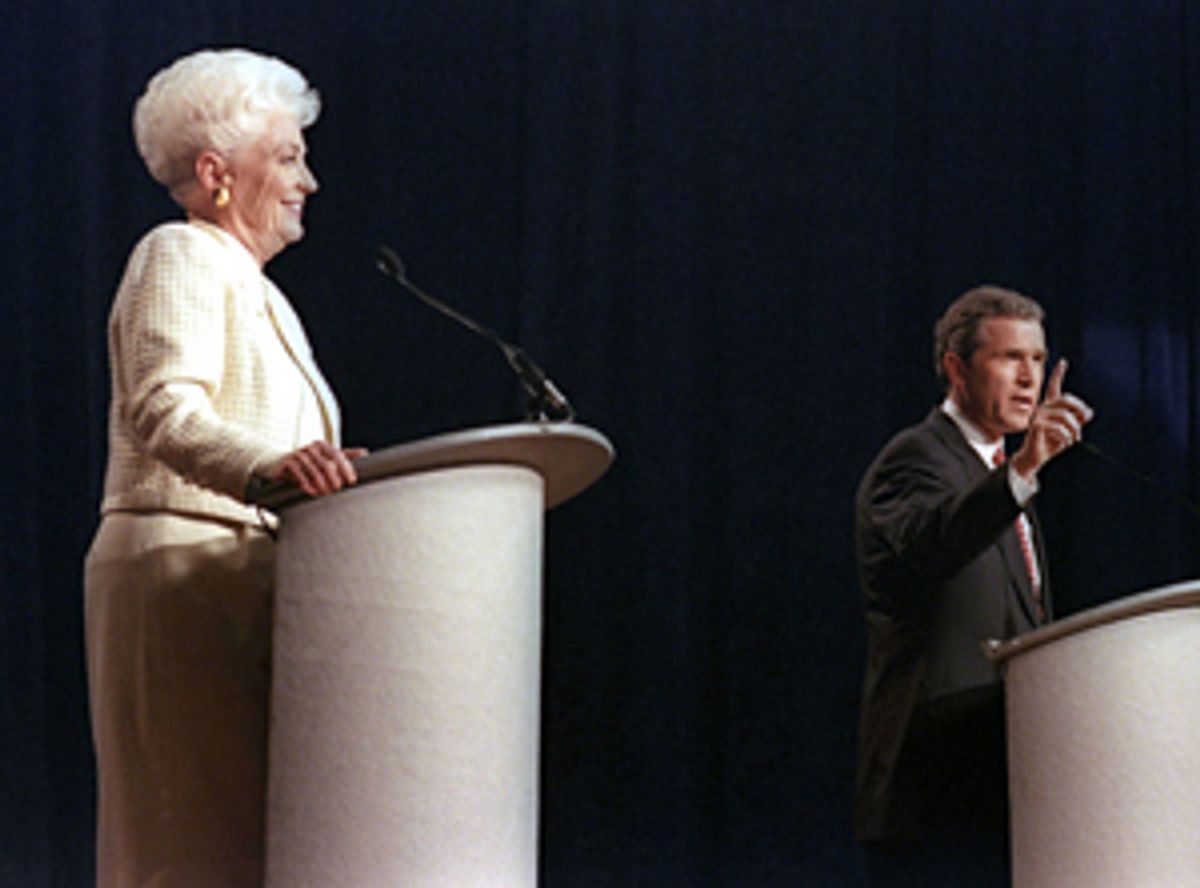 "Welcome to the first day of the new Texas!" Ann Richards growled into a microphone as she began her 1991 inaugural address.

She had just led a parade of supporters north on Congress Avenue, something of a fifth column moving on the Capitol. She had promised them she would use a pair of bolt cutters to open the gates of the Greek-revival governor's mansion to "the people" of Texas. "The people" were blacks, Hispanics, gays and lesbians, along with the shrinking Anglo majority, in a state that had and would again be dominated by leaders beholden to oil, gas and banking interests.

Old Texas had been run by a cabal the state's then-agriculture commissioner, Jim Hightower, referred to as the "bankers, bullies and bastards who run this state." Richards had defeated a corporate cowboy (and banker) from West Texas and succeeded a Dallas oilman who served as Richard Nixon's undersecretary of defense. (Her 1990 opponent, Clayton Williams, had offended women with a campfire joke made to reporters at his ranch: "Rape is like the weather, you can't do anything about it so you might as well lay back and enjoy it.") Richards' new Texas would broker a division of power among those bankers, bullies and bastards -- and the trial lawyers, environmentalists, consumer activists, feminists, and gay and lesbian political operatives who made Richards governor. If Ann Richards failed to manage that delicate balance of power in the one term she served as governor of this state, she gets some credit for trying.

Texas' populist constitution created a plural executive, dividing executive power among some 20 statewide elected officials. The governor is a first among equals, actually second in power to the lieutenant governor, who presides over the Senate. "A glorified ribbon cutter," is how a former Democratic speaker described the job. The governor's power lies in appointments to the agencies, boards and commissions that do the work of government. Richards used that power to create the new Texas for which she had campaigned. Forty-four percent of her appointees to state boards and commissions were women. Twenty percent were Hispanic. Fourteen percent were African-American. Her two predecessors -- one Democratic and one Republican -- had a combined average of 77 percent Anglo men.

There was much more to Richards than the large personality that has made her an icon and the stuff of political caricature. In bas relief beneath the woman delivering lacerating one-liners, the silver-haired grandmother riding a Harley on her 60th birthday, and the "homemaker" who became governor, was an elected official who genuinely cared about governing. "She never believed that government was the problem," said Rebecca Lightsey, a Richards appointee to the Texas Insurance Commission. "She believed that the function of government was to solve people's problems."

Richards campaigned on the "pothole" and good government issues she had worked in two terms as Travis County commissioner in Austin and two terms as state treasurer: insurance, ethics and environment. She had also dealt with constituent issues as a legislative aide to state Rep. Sarah Weddington, who as a young lawyer had prevailed in the Roe v. Wade abortion rights case before the U.S. Supreme Court. Once elected, Richards set out to deliver on her campaign promises. "On her first day in office, she started working on a insurance crisis that existed at the time," Lightsey said. "She took on the redlining that shut minorities out of the insurance market and made it illegal. And by the time she left office, Texas had health insurance reform that was adopted by the federal government."

Richards created the state's first ethics commission. She merged the Texas air and water regulation boards into one unified environmental agency -- then appointed an African-American who was not sanctioned by the business community to direct it. For more than a year, she traveled the state with a "Capitol for a Day" program, leading an entourage of agency heads and staffers from city to city to meet the constituents they served.

"She followed a generation of all those big Texas figures," says Mary Sanger, a campaign director Richards appointed to the state's housing commission. "Sam Rayburn, Lyndon Johnson, Ralph Yarborough, John Connally, Ben Barnes. For all their faults, and all their big egos, they honestly believed in government, that government should do something for the people. Ann belonged to the generation after them. She believed in government."

But Richards was elected to a state and a region in political transition. When she was elected as state treasurer, an office she held for two terms before she ran for governor in 1990, each of the statewide elected offices was held by a Democrat. By the time George W. Bush won his second term as president in 2004, every one of those offices was held by a Republican -- most of them clients of Bush's lifelong political advisor Karl Rove.

It was Rove who brought defeat to Richards in the 1994 gubernatorial election. Though she outspent Bush and started the campaign far ahead of him, Rove turned her new Texas against her, using a standard "God, guns and gays" campaign to bring her down. Richards had vetoed a statute in support of concealed handguns, aware that it would be used against her in the next race, precisely as Rove and Bush did use it.

She promoted environmental protections for Austin and the Texas Hill Country, which also worked against her. She had also presided over the largest expansion of prisons in Texas and a declining rate in violent crime -- but Rove and Republican political consultant Don Sipple designed a "soft on crime" campaign against her anyway. Rove also used a highly regarded Republican East Texas state senator to advance a whisper campaign about gays and lesbians surrounding Richards, some of whom had been appointed to boards and commissions that were to represent Richards' new Texas.

Richards bore responsibility for her loss in that she vastly underestimated George W. Bush -- and more important, Karl Rove and his ability to exploit the Texas old guard. "I think in the end she found herself caught between the liberalism of the 1950s and a new emerging progressive politics," Sanger said. "And the traditional forces that had controlled the state."

Surrounded by her family, Richards died of cancer in her downtown Austin condo. She was 73, on medical leave from Public Strategies, a consulting and lobbying firm. At the time of her death she was still working on behalf of the less privileged constituents who had followed her up Congress Avenue 15 years earlier. With her daughter Ellen, she was working on the advisory committee of the Ann Richards School for Young Women Leaders, an Austin public school that will open in September 2007.