The breast of times

I've nursed my son through four birthdays now. I know what the critics say, but it's what he wants. 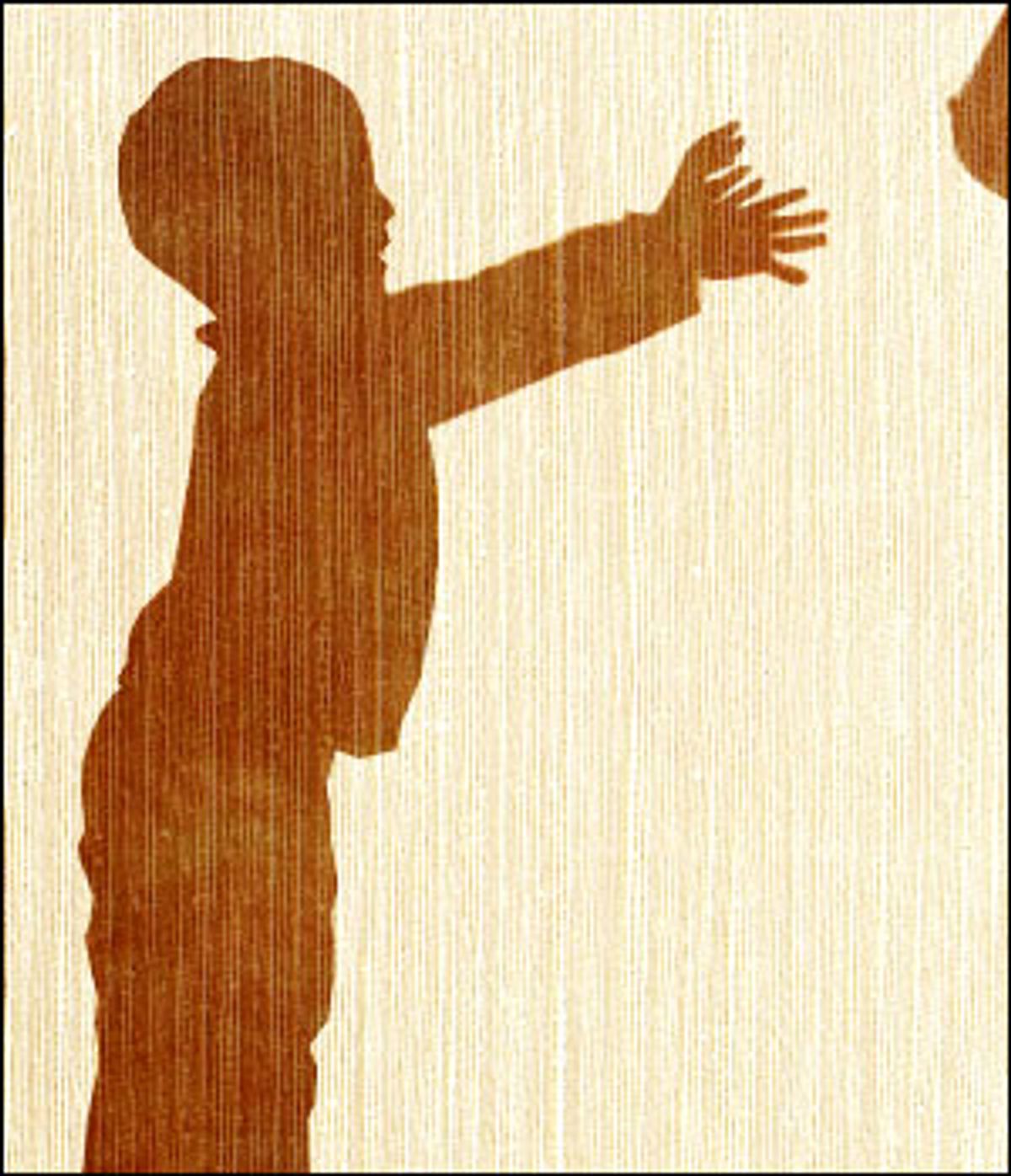 My son turned 4 a few weeks ago. His birthday wishes included the following: real binoculars, anything to do with Spider-Man and to keep on nursing.

In the past two years, like a slice of Wonder bread squeezed into a marble of dough, the breast-feeding my son so treasures has been compressed into something that only vaguely resembles its original self. For us, nursing has become a brief bedtime ritual that lasts as long as it takes me to sing the alphabet song. It involves little overt emotion; most of the time the process is as perfunctory as the tooth brushing that precedes it. It no longer offers much nutrition: My milk has dwindled to a few desultory drops.

What this ritual also became long ago is a loosely kept secret. For many women, the decision whether to breast-feed at all has become a public litmus test of maternal devotion. Recent government efforts to promote it have provoked an emotional debate that boils down to one loaded question: Are you a bad mother if you don't breast-feed? Having experienced the challenges of breast-feeding firsthand, I don't think so. But having started down this path, my personal debate has involved a different question altogether: Am I a bad mother if I haven't stopped?

Though there is a growing body of scientific knowledge about the nutritional value of breast milk, science has relatively little to say about breast-feeding's psychological value, and even less to say about continuing past the usual milestones. The World Health Organization promotes breast-feeding until age 2 and beyond. American Pediatric Association guidelines recommend breast-feeding for 12 months, and after that for as long as "mutually desirable." But what to do when the desire -- on the part of at least one party, anyway -- shows no real sign of abating? When physical nourishment is almost beside the point, and what we are talking about is mostly the emotional kind?

In some quarters, my decision might still be considered criminal. In 2000, a 5-year-old in Illinois was taken from his mother when a baby sitter reported to police that he was still breast-feeding. In 2003, a Dallas mother was arrested after having taken a picture of herself breast-feeding her 1-year-old. Even in Madison, Wis., where I live -- once famously described by radio host Bill O'Reilly as a place so liberal you expect "people to be communing with Satan" -- the line separating "OK" from "Oh, yuck" still seems thinner than a bra strap.

Unlike critics, who seem preoccupied with what they perceive as the sexual nature of contact between a child and his mother's breast, I don't worry for a minute that my child may become sexually maladjusted in any way. Nursing produces the opposite of excitement or stimulation for a child. Sometimes I do wonder, though, whether by not cutting off this particular source of comfort and calm I am prolonging his learning to calm himself. And every now and then I wonder if, merely by virtue of its rarity, his extended time at the breast will make him feel different-bad instead of different-good.

As a practitioner of "extended" nursing, I'm hardly alone. I could connect in online forums with a whole underground of mothers who are breast-feeding toddlers and preschoolers, even two and three at a time. This is not a club I ever aspired to join. Before my own child was born, the term "extended nursing" would have brought to mind Ruth in Toni Morrison's novel "The Song of Solomon," who demanded that her school-age son suckle from her tired breasts even when his feet reached the floor. Before I had my own preschooler, a mother still nursing a 4-year-old was surely a mother with "issues."

Then I became a mother. Issues followed almost immediately thereafter.

When pregnant, I was lucky enough to be an executive in a toy company that was supportive of breast-feeding mothers. Two electric pumps (no waiting) in two converted shower stalls allowed space and a modicum of privacy for the handful of mothers in my office who breast-fed. I mapped out a plan that would allow me, in theory, to keep my boss, my staff and my baby happy. I would return to work after a truncated maternity leave and would report to the shower stall for an hour each day so my son would have his pediatrician-recommended due: mother's milk for one full year.

The breast-feeding guides I pored over promised an easy, nay, delightful experience. After my baby arrived, though, it was clear some critical details had been omitted. Not all newborns know what to do. And, contrary to appearances, an infant's gums are anything but soft. Breast-feeding him hurt like holy hell.

I turned for help to the sort of experts I'd felt betrayed me. A hospital lactation advisor advised nursing in a cross-armed position that required the use of two pillows. She recommended I massage my breasts while feeding (a third arm would have come in handy here) and prescribed an herbal supplement to increase my milk supply. I swallowed weedy capsules by the fistful.

Each week, we visited a clinic where white-coated ladies watched our latching process, murmured encouragements and rearranged the baby's lips and my nipples with impunity. They weighed the baby and his diaper before and after nursing, and I gauged our progress gram by hard-won gram.

The baby worked hard too, and when my maternity leave ended, it seemed we were both relieved. He took eagerly to the bottle while I worked, and switched back willingly to the breast when I returned. As for me, disappearing three times each day to fill his bottles was awkward and inconvenient, but compared with actual nursing it felt like relaxation.

As corporate upheaval made my job harder, breast-feeding, mercifully, was getting easier. By the time my baby was 5 months old, the hour I spent pumping had become, literally, the most productive part of my workday. I began to wonder, in all seriousness, why Norway was the only country in the world enlightened enough to count human milk in its measure of national food production.

I quit my job and took up freelance work that allowed me to nurse practically on demand. I breast-fed through phone meetings, typed with one hand while nursing the baby in the other and, like many mothers, figured out how to nurse standing up when the need arose. It arose surprisingly often. My son, it was turning out, was what parenting books tactfully call "spirited." Milk was the elixir that calmed him through difficult transitions, suckling the ritual that eased him into sleep.

Our original weaning date came and went. Stopping at his first birthday seemed absurd. He'd barely begun walking! He had only six teeth! Doubts emerged only after another year had passed. My husband began to feel powerless and excluded. With breasts, putting our toddler to bed took 10 minutes. Without them, it was an hourlong war of attrition.

No one in our play groups was nursing anymore -- at least not openly. But just as I began thinking about reclaiming my body, my son's investment in staying connected to it seemed to double. In one of his videos, I recalled footage of a sow grumpily nudging piglets away from her teats. Sister, I thought, I understand.

The methods at our disposal were less emphatic, and less effective. Long past his second birthday our son was still waking twice a night to nurse and I was still nearly as sleep deprived as I'd been after he was born. We tried weaning him gently. One book advised that "daddy's loving arms" were an excellent substitute. But not, apparently, if mommy's breasts were anywhere within, say, 100 feet. Mostly through the time-honored technique of distraction, we were able to phase out nursing opportunities one by one until only his dearest, the bedtime nurse, remained. When business called me out of town, I was sure this last vestige of the practice would extinguish itself. But when I returned, it was just the same: He wanted me to put him to bed, and he really wanted the thing he called "ni-ni."

By the time my son was nearly 3, we'd whittled the remaining nursing period down to the length of a single song. Not being musically gifted, I defaulted to the ABCs (and tried not to worry that he might come to associate the alphabet and, by extension, literature in general, with some sense of loss or deprivation). When I substituted other songs, he despaired. The message was clear: Every part of the process was sacred. And at this point he was not going to stop unless I simply forced him to.

It was while debating how much harder to push that I talked with a friend who'd weaned her son sometime after age 1 so she could return to work. Her only regret surprised me. She was a bit sorry her son would surely have no independent recollection of breast-feeding. "It would be lovely for him," she mused, "if he remembered."

As a mother-to-be, I had carefully weighed the nutritional benefits of breast-feeding, but I hadn't considered this: a benefit as simple and powerful as a happy memory. The mere possibility that this might matter someday trumped every minor doubt. I made up my mind: If my son wanted, he could go a little longer, perhaps to 4, the age to which I date my own earliest memories.

Don't get me wrong: Over the past four years, I have firmly and confidently denied my child countless things he really, really wanted because they weren't good for him. Saying no is part of what parents do. But -- call me weak -- for now I'm not willing to deny him the connection he still seems to need. I'm certain that in the coming months, with gentle nudges from his parents, he will find his own way to weaning, just as he did with other milestones like swimming underwater and not hiding during thunderstorms.

If asked to explain why this is right for my own child, I would answer by asking whether it might not be right for many children, if their mothers' inclinations and social support allowed. I might cite anthropologist Katherine Dettwyler, whose research posits a natural biological age for weaning of 2.5 to 7 years, or add that my son is unremarkable, globally speaking: The worldwide average age of weaning is 4.2 years. But there are few facts beyond these to offer.

No matter; in this, as in many other parenting dilemmas, I've come to rest as much on hope as on fact, and more on our own idiosyncratic story than on any official one. Dostoevski wrote that a single happy memory might be all man needs to avoid despair. My son will probably have many. Maybe one of them will be one I share, one involving the ABCs and a few peaceful moments at the edge of sleep. And maybe one day that will matter more than either of us can know right now.

Judith Woodburn is a writer in Madison, Wisconsin.