The Republicans who now agree with the president that the War Crimes Act is too vague said something very different 10 years ago. 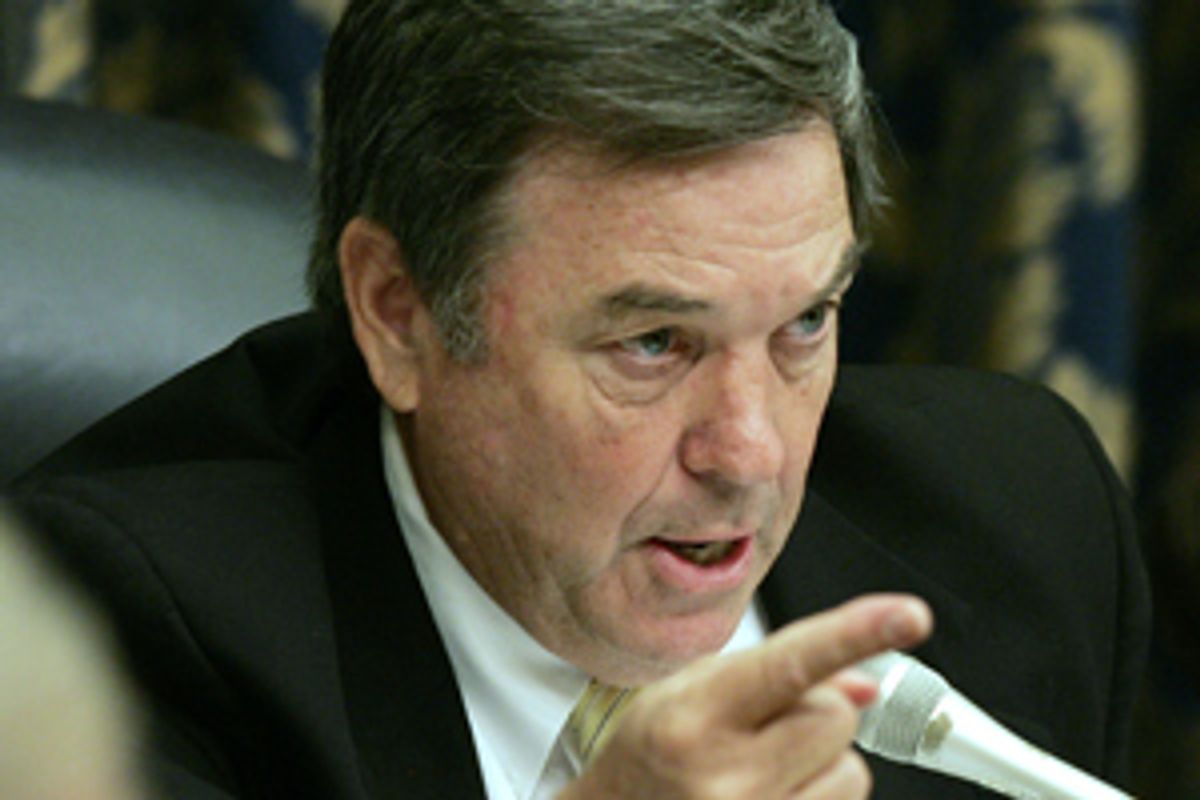 As he announced at a press conference earlier this month, President Bush wants to change U.S. law in two different ways that he says will allow CIA officials to keep conducting interrogations that he claims have produced valuable intelligence in the "war on terror." He has asked Congress to pass legislation that would sidestep the part of the Geneva Conventions that prohibits "outrages upon personal dignity," and he also wants Congress to rewrite the 1996 War Crimes Act in such a way that the Geneva Conventions would no longer be enforceable.

Though Bush's proposal would indelibly alter America's reliance on an internationally recognized standard for conduct during war, the Republican majority in Congress rushed to support his position. House Armed Services Committee chairman Duncan Hunter, R-Calif., embraced Bush's plan and successfully pushed it through his committee last week. Hunter said that the Geneva Conventions, and in particular that prohibition on "outrages upon personal dignity," are too "vague" to be enforceable, and that the War Crimes Act therefore needs to be changed.

But back on March 29, 2003, in a radio address during the opening days of the war in Iraq, the president claimed that American forces, as opposed to the Iraqis, were committed to following the laws of war. "The contrast could not be greater between the honorable conduct of our liberating force and the criminal acts of the enemy," he intoned. And Republicans in Congress followed Bush's lead. Less than a week after the address, Duncan Hunter chaired a hearing in which he promised proudly that enemy prisoners would receive "humane treatment" even when the enemy violated the laws of war. "The United States, more than any other nation in history, conducts its military operations in strict compliance with the law of armed conflict," Hunter said. The enemy's vile actions, he vowed, "will in no way alter the way we treat Iraqi prisoners."

John Kerry was branded a flip-flopper for far less. But last week's GOP turnabout becomes all the more startling when you realize that some of the very Republicans who now say the War Crimes Act needs to be amended were among those who helped write it 10 years ago. Duncan Hunter, in fact, was one of the 15 Republicans in the House (there were also three Democrats) who co-sponsored the original legislation, and he also co-sponsored an expansion of the act, covering even more potential transgressions, that passed the very next year. Similarly, in the Senate, the man who shepherded the original bill through that body in 1996, Oklahoma Republican James Inhofe, is now a co-sponsor of the bill that would gut it.

Back in 1996, a vote for the War Crimes Act, which passed both houses with overwhelming support, could have been considered a vote for the U.S. to follow the Geneva Conventions to the letter. When a House Judiciary Committee panel first considered the War Crimes Act in June 1996, John McNeil, then a senior deputy counsel at the Department of Defense, testified that the bill was "an opportunity for members of Congress to endorse the idea that the United States, as a political matter, should be seen as fully in conformity with its international obligations in this very sensitive area."

But at the time Republicans were really focused on making sure U.S. courts would be able to prosecute war crimes committed against American citizens, not by them. Inhofe took to the Senate floor that August to say the War Crimes Act would protect "our young troops" in the event "a crime is perpetrated against them."

It was unthinkable back then that it might be the United States that was systematically violating the Geneva Conventions. "There was never any hint or clue that this might be applied to us," stated Gary Solis, an expert on the law of war at Georgetown University. Elisa Massimino, Washington director of Human Rights First, explained, "No one ever questioned that the U.S. would comply with the full range of the Geneva Conventions obligations."

That is, no one doubted the U.S. would comply until early this month. Stung by the Supreme Court's recent Hamdan decision, President Bush announced he had been forced to halt a CIA program in which the Department of Justice secretly approved what the president called "tough" interrogation techniques against high-value terrorism suspects. CIA interrogators had reportedly subjected suspects to simulated drowning, prolonged isolation, slapping, sleep deprivation, reduced food intake and exposure to bright lights and loud sounds.

Bush claimed that what the CIA has been doing falls short of torture and that he wants it to continue. He has asked for legislation that would do two things in tandem. First, in a move that has raised the hackles of former top military officials and former Secretary of State Colin Powell, Bush has called on Congress to pass legislation detractors say would clearly subvert a protection in what is called "Common Article 3" of the Geneva Conventions. That provision prohibits "outrages upon personal dignity, in particular humiliating and degrading treatment."

In addition, the president has also proposed changes to the War Crimes Act that he says would allow CIA officials to continue to work on the interrogation program without fearing liability, but would also set clear limits. "I am asking Congress to list the specific recognizable offenses that would be considered crimes under the War Crimes Act," he argued, "so our personnel can know clearly what is prohibited in the handling of terrorist enemies."

But legal experts said the changes sought by the president -- which would be retroactive -- would also insulate high-level Bush administration officials who approved interrogation tactics that contravene the Geneva Conventions. "They are saying, 'Lets protect those that may have violated the law with a change of the War Crimes Act,'" explained Solis.

Not surprisingly, when it comes to their prior stated commitment to enforcing the laws of war, Hunter and Inhofe and other Republicans in Congress have responded with a kind of collective amnesia. Last week Hunter told his committee, "Since violation of Common Article 3 is a felony under this act, it is necessary to amend U.S. law to provide clarity and certainty to the interpretation of this statute." The congressman's office would not make him available to explain why he appears to have flip-flopped on the War Crimes Act. His spokesman instead provided a copy of Hunters public statement on the issue, which makes the argument that changes are needed because the so-called war on terror is "a new type of battlefield and a new type of enemy." Hunter went on to declare that his goal is to "protect our troops on the battlefield from becoming involved in a legal quagmire which would prevent us from effectively pursuing terrorists and to ensure that America can effectively protect its citizens."

In the Senate, meanwhile, Inhofe was also unwilling to explain his change of heart on the issue. Other co-sponsors include Senate Majority Leader Bill Frist, R-Tenn., and Senate Majority Whip Mitch McConnell, R-Ky.

Some military officials and legal experts -- including former Bush administration officials like Powell -- are less concerned about changes to the War Crimes Act that might let some Bush administration officials off the hook. The main goal now, they say, is to ensure that the United States continues to abide by all of the provisions of the Geneva Conventions, including the prohibition on "outrages upon personal dignity, in particular humiliating and degrading treatment."

"I think we need to stick to that," William Taft, former legal advisor to the Department of State in the Bush administration, said in an interview. "We have held everybody else to it and we should not be fiddling with it."