Payback is a blast!

During a TV debate about the pope and Islam, I told a right-wing critic his bullying reminded me of Muslim extremism -- so he bullied me. Take a look. 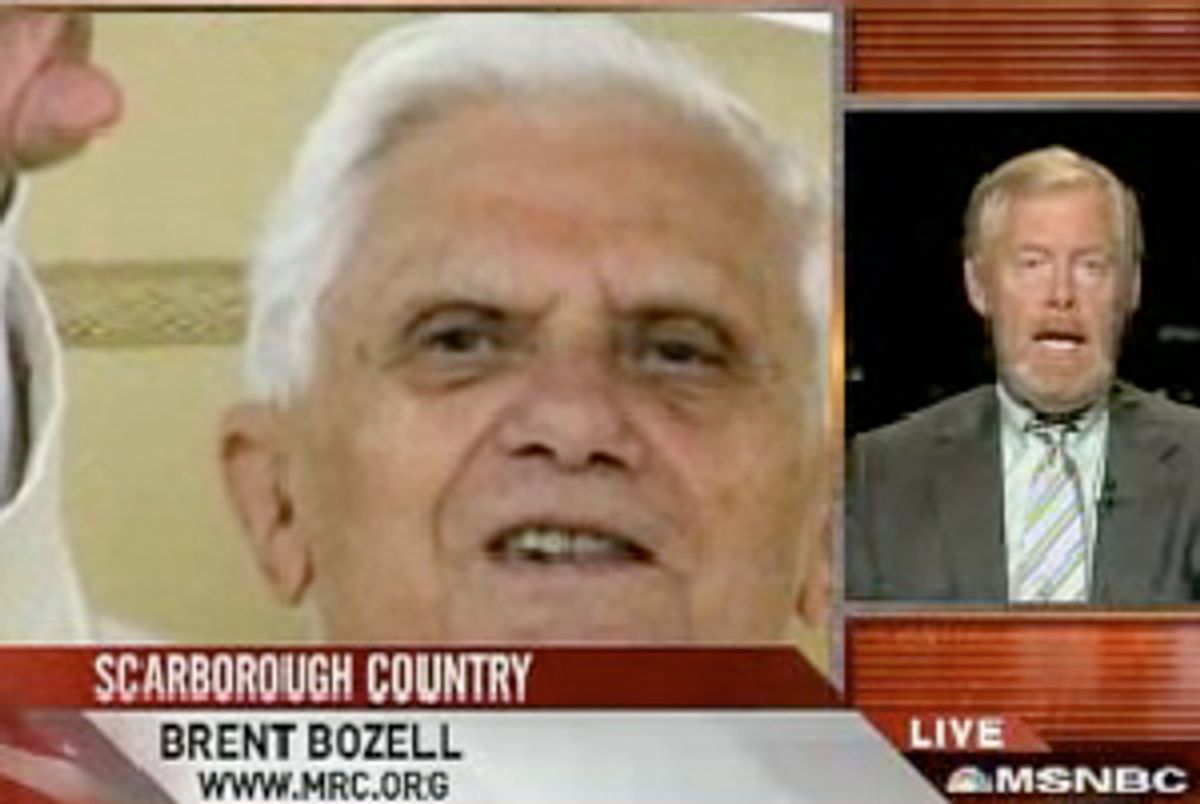 I've been treated well on MSNBC's "Scarborough Country." Joe knows he needs liberals who will mix it up, and every once in a while Joe even mixes it up with himself, as he did with his "Is Bush an 'idiot'?" segment. So when I was asked to debate right-wing media pit bull Brent Bozell on whether the "liberal media" was devoting too much attention to the controversy over Pope Benedict XVI's recent remarks on Islam, and not enough to the extremist reaction against them, I said sure. I've debated Bozell before, so I knew what I was up against -- he's a conservative fantasist. No problem.

But I didn't expect Bozell to lie about what I said, on camera -- or for Scarborough to back him up, with the tape rolling.

Even I've been surprised at the way right-wing windbags geared up to defend the pope, who committed an old-fashioned gaffe -- that's when you tell people what you really think. He quoted a 14th century emperor who was defending Constantinople from a Muslim attack, describing Islam as "evil and inhuman." Most surprising, the pope apologized. Sure, it was one of those apologies that won't get you off the hook with your spouse or child -- I'm sorry if you were offended! -- but in the annals of papal inflexibility (he's infallible, after all) it had few precedents.

Still, right-wingers are apoplectic over the fact that the so-called liberal media is covering the controversy over the pope's remarks, and not merely the reaction to them by extremist Muslims. Clearly, there's been an excessive and scary reaction; the murder of a 65-year-old nun is the most heart-rending example. To my eyes, though, the story has been well covered. I have the TV on silently in the background at work all day long; the pope has been burned in effigy countless times every hour; I've seen the kind face of Sister Leonella, the Italian nun murdered in Mogadishu, Somalia, over and over; the burned churches in Gaza got coverage, too. Which they deserve.

Yet the wider context of the speech merits attention as well. Pope Benedict's medieval sampling in Germany last week isn't the only example of his taking a dark view of Islam. His predecessor, John Paul II, was energetic about outreach to Muslims -- he was the first pope to visit a mosque, in Syria in 2001, and he also visited dozens of Muslim countries. This pope, by contrast, is on record suggesting Islam leads to violence and irrationality on several occasions, back when he was Cardinal Ratzinger. He has opposed Turkey's joining the European Union, suggesting it better fits in an alliance of Muslim nations. And he also canned his predecessor's Islam expert, Archbishop Michael Fitzgerald, and so he flew solo on the speech that raised all this trouble.

I thought there was plenty on both sides to discuss on "ScarCo." But I was wrong.

Maybe trying to make up for his "Is Bush an 'idiot'?" segment, Scarborough teed off on the "liberal media" to open the show, accusing it of ignoring the menace of "Islamofascism" in favor of plumbing the implications of the pope's remarks. Then he went to Bozell, leading with one of the bomb thrower's quotes frothing that liberals and the liberal media in particular "have bowed to radical Islam." Where Joe praised the pope for apologizing for his remarks for the sake of "diplomacy," Bozell pointed out -- correctly, in fact -- that he didn't apologize, he only took the cornered-spouse way out. That was about the last correct thing Bozell said.

I didn't mind the two-vs.-one odds. I did mind their tarring liberal journalists as stooges for al-Qaida; I noted that as an American feminist, I'm not naive about al-Qaida's aims, let alone supportive. Things took a really fun turn, though, when I suggested that "Muslim extremists and conservative extremists" had something in common -- namely, their desire to stifle debate and intimidate their opponents.

They both started shouting at me. "Hold on, Joan!" "Come on, Joan!" "Wait a minute!" Bozell was apoplectic: "A sweet holy saintly nun is dead on the streets of the Sudan [sic], and I'm going to get a lecture from you equating Christians with radical Muslims? How dare you, Joan!"

I dare do many things that would cause Bozell to foam at the mouth, I'm sure, but I hadn't equated radical Muslims with Christians but, rather, with "conservative extremists." Yet when I denied having made the comparison, Joe jumped in: "Yes, you did."

The tape is here. You can see what I said, and that I didn't say it.

But Bozell went on, demanding to know whom I was equating with Muslim extremists who want to stifle free speech.

After trying to make my larger point, I caved. "Well, often it's people like you, Brent." More frothing ensued. My only regret is not caving on that point immediately.

Joe was nice when it was over. He told me he'd have me back again, and next time it would be he and I against some other guest. I told him I'd come back even without that promise, but I thought twice after I saw the segment. It bothered me that he'd backed Bozell's claim that I'd compared "Christians" to Muslim extremists, when in fact I hadn't. For the record, I'm a Roman Catholic, if a disgruntled, feminist Catholic who loathes both popes' small-minded, fearful teachings on women and sexuality, but who also attends church and sends my daughter to an excellent Catholic high school in San Francisco. It's no small thing to accuse me of slurring Christians. They're my family.

But I learned something by mixing it up with Scarborough and Bozell. Payback is a ... blast! The idea that it's fine to say that the "liberal media" has "bowed to radical Islam," but you can't point to similarities between right-wing conservatives who intimidate their critics and Islamic extremists, is quite extraordinary. It's a vivid measure of how liberals have been cowed in the current climate -- and how conservatives have been able to run amok. And after years of hearing the Bush administration smear critics as al-Qaida dupes and sympathizers, I'll admit, it was kind of fun to turn the tables -- and hear them shriek like schoolboys at being compared to Muslim extremists. Those are fighting words, where I come from, and I'll fight back hard from now on. I'm just sorry Bozell and Scarborough are so unused to liberals fighting back that they had to resort to lies in response.