Written out of the story

New voting machines will make it awfully hard for Tom DeLay's would-be GOP successor -- or any other write-in candidate -- to win an election. 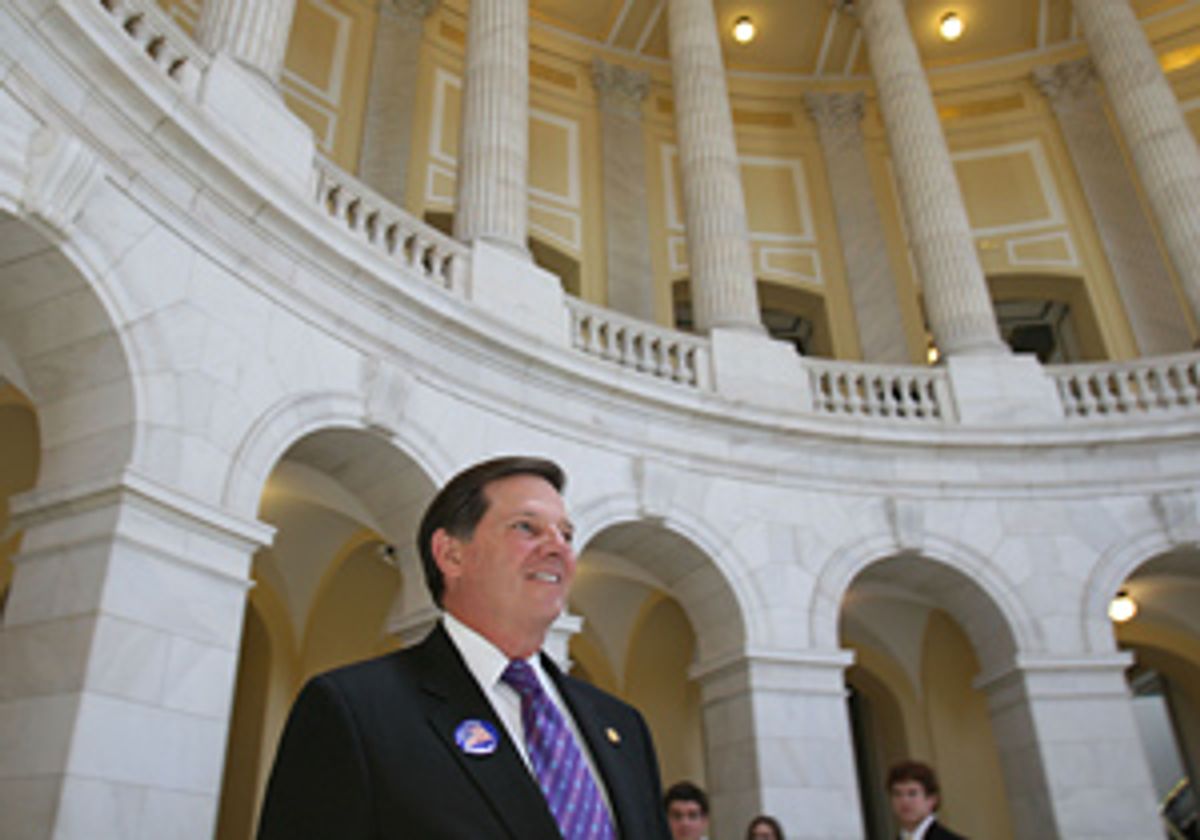 Shelley Sekula-Gibbs, a dermatologist who lives in Houston, has been forced by a machine to change the way she spells her name.

Sekula-Gibbs is the Republican write-in candidate seeking Tom DeLay's former seat in the U.S. House of Representatives. But most voting, even write-in voting, is now done on electronic machines in the 22nd congressional district of Texas. The machine most commonly used in the district requires voters to enter the candidate's name letter by letter, and it doesn't allow hyphens, so Sekula-Gibbs has eliminated the hyphen in her last name in all her campaign materials.

The safe Republican seat that "The Hammer" held for 22 years before resigning amid scandal earlier this year is one the party wants desperately to keep. After DeLay resigned, Republicans tried to purge him from the fall ballot and replace him with Sekula-Gibbs. When a judge refused to allow it, the GOP was forced to run Sekula-Gibbs as a write-in.

But winning a write-in campaign in a major election has always been hard. Only four candidates in the past 75 years have been elected to the U.S. House by write-in, and the last one was in 1982. Candidates who do succeed are, unlike Sekula-Gibbs, usually well-known in their region beforehand. For instance, Strom Thurmond won as a write-in candidate for the Senate in 1954, after he had already been governor of South Carolina and had run for president.

Winning was hard when write-in votes really were "write-in" votes -- when citizens scrawled the names of their preferred candidates across pieces of paper and shoved them in ballot boxes. Now, as voting gets further from its pen-and-paper roots, and more and more districts across the country adopt electronic voting machines -- 40 percent this election, up from 30 percent just two years ago -- it is often no longer physically possible to write in a candidate's name. Voters press letters to spell the name of a write-in candidate on a touch screen, or twirl a dial to choose the letters. The machines in use in Texas and many other states this fall will make it harder for write-in candidates -- even officially sanctioned ones like Sekula-Gibbs -- to win an election, and it will only get harder in the future.

"It's so difficult to carry out a write-in campaign, particularly on these electronic machines," says Larry Sabato, professor of political science at the University of Virginia. "People, even strong partisans, will be hesitant to do this."

Most voters in Texas' District 22 will be using the eSlate Electronic Voting System, made by Hart InterCivic, when they cast their ballots. On the eSlate, the names of the candidates appear on a screen, as does an option that reads "Write-In." A voter who chooses to write in a candidate's name turns a dial marked Select until the Write-In option is highlighted, then presses the Enter button. The alphabet appears on the screen. The voter must use the Select wheel to highlight each of the individual letters in the write-in candidate's name. As each correct letter is highlighted, the voter must press the Enter button to select it, repeating the process until the name is spelled in full. Then the voter must turn the dial till the word "Accept" is highlighted and press Enter one last time. (You can try out an online demo of the device here.) The eSlate is not only being used in Texas; it's also deployed in California, Colorado, Hawaii, Illinois, Kentucky, Massachusetts, Ohio, Pennsylvania, Tennessee, Virginia and Washington.

Unfortunately for Sekula-Gibbs, the eSlate system doesn't offer a hyphen as an option for write-ins. So, on all of her campaign materials, and when she filed her name with the state as an official write-in candidate, she left out the hyphen, spelling her name Shelley Sekula Gibbs. "Just so it's not too confusing," explains Lisa Dimond, the candidate's campaign manager.

Dropping the hyphen doesn't help Sekula-Gibbs much. Under the auspices of the National Science Foundation, Ben Bederson, associate professor of computer science at the University of Maryland, has conducted usability testing on the eSlate and other electronic voting machines and has found that "writing-in" electronically can be time-consuming and frustrating. Shelly Sekula-Gibbs' name is still 18 characters long without the hyphen. Bederson thinks voting for her via eSlate will prove to be an especially laborious process.

"For each of those 18 characters," says Bederson, "the person needs to turn the wheel to highlight the correct letter. And it's one of 26 letters, so they have to select one of 26 things. A lot of times, they overshoot the letter and have to go back. Eventually they get the correct letter highlighted. Then, they have to press the button to select that letter. Then, they have to do the same thing 17 more times. Think about how much interaction with a computer this is going to be. Doing that is just a lot of work. In a longer operation of a computer interface, there is more opportunity for error."

Voters who do make a spelling error will have their write-in votes counted, as long as election officials can determine the voter's intent, according to David Bierne, a spokesperson for the Harris County Clerk's Office. But it's not misspelling that worries Bederson in this case, so much as voters simply throwing up their hands and bailing out. "We know from experience that people who are doing a long computer task -- that some percentage of people are going to get frustrated or bored, and they're going to give up."

Sabato notes that voters are often in a hurry -- casting ballots on their lunch hour, or on their way to work, or at the end of the day before rushing home to make dinner. Plus, voters often get self-conscious about holding up a line of voters. They don't want to spend too much time in the booth. "This takes time and effort to do," says Sabato. "You have to really be motivated. I'm not sure that motivation is present in that district for this candidate."

Republicans have tried to make it easier for Sekula-Gibbs to compete. On Nov. 7, when voters are twirling dials for her in the general election, they will also be voting for her in a special election. The special election will fill DeLay's vacant seat in Congress through January. Some see the election, ordered by Gov. Rick Perry, as a dirty trick by Republicans to give a boost to their candidate by at least having her on one ballot next to the name of the Republican Party as a reminder to the faithful.

Texas state law also lends Sekula-Gibbs a hand. In Texas, write-in candidates must be certified before the election, and a list of officially approved candidates is available at each polling place. It is also available inside the voting booth itself, on a piece of paper that lists all the write-in candidates' names in the same size and font and without party affiliation.

For one final twist, not all precincts in the district use the same voting machine. District 22 takes in parts of Harris, Brazoria and Fort Bend counties, which all use the eSlate. But it also includes a chunk of Galveston County, which offers voters a choice of either the eSlate machine or an optical scanning device.

Using the optical scanning device means Republican voters can physically write Sekula-Gibbs' name on a piece of paper. Still, the paper ballots used with the optical scanning devices have their own problems handling write-ins, according to Bederson. For the scanner to recognize that a write-in vote has been cast, the voter must also fill in a bubble next to the blank where the name goes. Some voters simply scribble the name of their candidate on the line and don't mark the bubble, which can lead to votes that aren't counted.

Sabato predicts that Democrat Nick Lampson, with his heavy campaign war chest and the advantage of being on the ballot, will win the race. But he thinks that the Republicans have a good chance of taking back the seat in '08, when they have a candidate on the ballot.

Bederson, meanwhile, has his own write-in vote -- for Diebold. If you're forced to "write in" a vote on a machine, he says, touch-screen machines, like the Diebold AccuVote are the easiest to use correctly. Diebold machines have, however, recently been shown to be vulnerable to hacking.