This martial-arts epic is one of the most beautifully made pictures of the year. 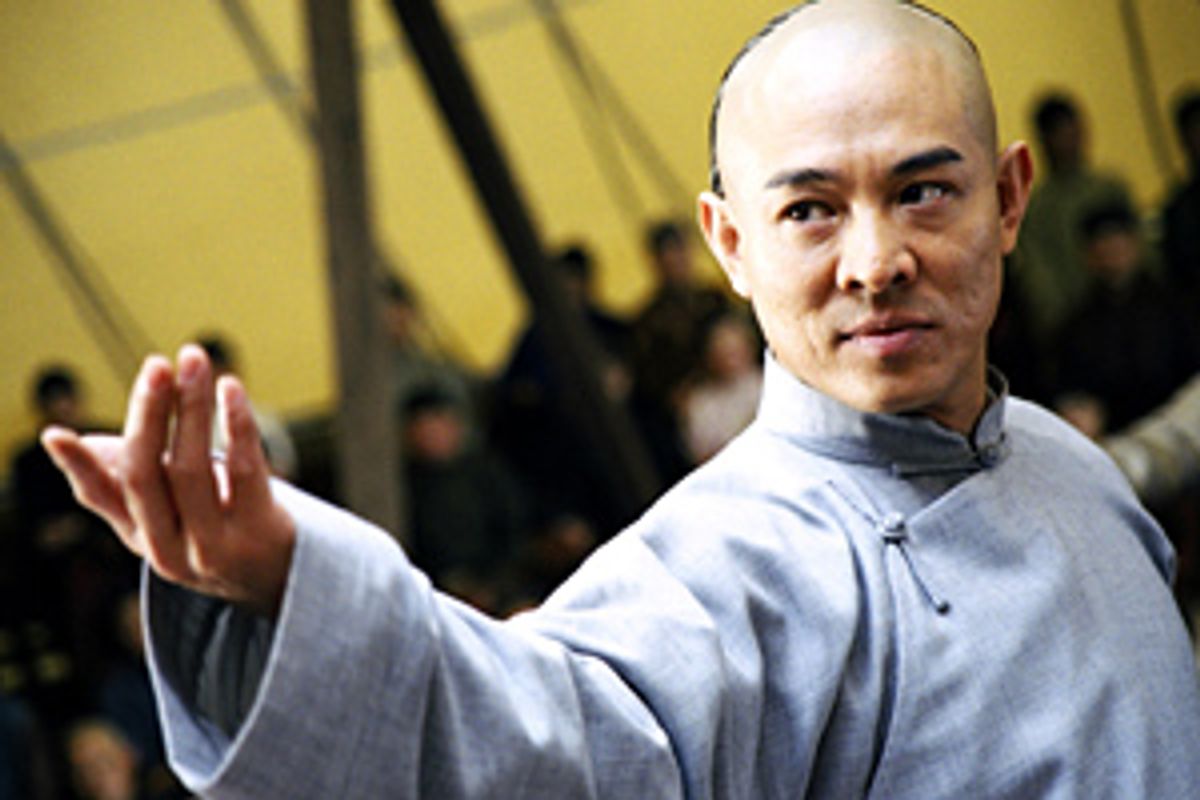 One of the great disadvantages of living in a time when there are so many movies jockeying for our attention, both inside the multiplex and out of it, is that we're often too cavalier about grouping movies into categories: There are things we really want to see, things we might see if our friends express an interest, and things that we'd never dream of bothering with. Fans of martial-arts star Jet Li, and of martial-arts movies in general, have long been looking forward to "Jet Li's Fearless," which has been touted as Li's final martial-arts picture, although that finality is debatable: "Fearless" may be only his last martial-arts epic, which certainly leaves a lot of windows open. Still, there's something grand and enveloping about "Fearless," a fable based loosely on the life of Huo Yuanjia -- played by Li -- a turn-of-the-century fighter who founded the Jingwu Sports Federation, a martial-arts school that focused as much on spiritual self-awareness as on pure technique. If "Fearless" doesn't represent the end of Li's martial-arts career, its vision -- one that manages to be both humble and lavish -- is certainly grand enough to mark a turning point.

But "Fearless" deserves an audience larger than the one that already plans to seek it out. Sold as a martial-arts film, it's also the sort of movie that deserves to draw the kind of moviegoers who came out to gaze with wonder at "Crouching Tiger, Hidden Dragon" and "House of Flying Daggers" -- pictures that were geared not just to genre enthusiasts but were also sold, for better or worse, as "serious" movies suitable for a discriminating mainstream audience.

"Fearless," directed by Ronny Yu, is certainly a genre picture, with all the energy and life the adjective genre implies (it's never a pejorative in my book). "Fearless" is also one of the most beautifully made pictures of the year: The story is told so simply and clearly, and in such striking visual terms, that I can already hear people carelessly accusing it of being clichéd -- although sometimes the things we so comfortably identify as clichés are also the very things that give us our purest movie experiences, allowing movies to reach us in the deepest and most essential way. And Li's performance -- both in terms of its physicality and its emotional pitch -- puts much of what's lauded as great contemporary movie acting to shame. He's a marvel, and his performance feels like a gift from above particularly given that "Fearless" is being released in the same week as that over-earnest Oscar-baiting dud "All the King's Men," where we see Sean Penn acting up a storm of sound and fury, signifying nothing.

"Fearless" is a direct and uncomplicated picture: It opens with Li's Huo facing a series of opponents during a public match. These fighters come from several nations -- England, Spain -- but it's clear that the purpose of the battles, in Huo's eyes, is not just to defend the honor of his country, but to reinforce the honor of the fight itself. He takes on each successive opponent with the calmness of a tree whose leaves are ready to withstand a breeze or a gale: Going sword-to-sword or hand-to-hand, he dips and twirls through the air as if he were part of it, and not a flesh-and-blood creature whose mere existence blocks its flow. Li's fighting is so deeply pleasurable to watch that even its brutality -- and sometimes it is brutal -- can seem like music. Relatively gentle skin-to-skin contact can come off as searing. And sometimes you can almost hear the sound of bones not cracking but bending -- a gentler but more horrifying sound.

Huo dispatches each one of these opponents with ease, but afterward, he surveys them with a cool regard that betrays glimmers of respect: A winner, after all, owes plenty to the loser. Yet the early structure of the movie tips us off that Huo hasn't always been this powerful, or this enlightened. And so Yu takes us through Huo's journey in a series of flashbacks, starting with his childhood (Huo was the son of a martial-arts instructor who refused to teach his son how to fight, fearing that doing so might damage the boy's delicate health) and wending forward to his early adulthood, when his cockiness, fueled by his desire to be the greatest fighter in the region of Tianjin, brings tragedy upon him.

For the past 10 years or so, Yu has worked extensively in American movies (his credits include "Bride of Chucky" and "Freddy vs. Jason"), but enthusiasts of Asian film revere him more for pictures like 1993's feverishly dreamy "The Bride With White Hair." "Fearless" is a lyrical but sturdy picture, one that actually has very little dialogue: Like some other great Asian fantasy epics, such as "House of Flying Daggers," it has a silent-movie quality, telling much of its story with the flow of visuals. Yu and his cinematographer Poon Hang Sang treat those visuals like moving paintings, showing us one-on-one battles that feel weightier than the kind fought by vast armies, green landscapes that dissolve into snowy ones to show the passage of seasons, and intimate indoor vignettes of the bodies of loved ones being cradled and mourned. The picture is gorgeous to look at, without seeming overworked: Even the vivid reds, grays and golds of its city scenes throw off a creamy glow.

But I dont think there's anything more beautiful in "Fearless" than Jet Li's perfectly imperfect face, one that's expressive and receptive in all the right proportions. Li gave one of the most astonishing performances of last year in "Unleashed" (known in other countries as "Danny the Dog"), directed by Louis Leterrier and written by Luc Besson. It was a largely wordless performance with the quiet grandeur of great silent-movie acting.

Li's performance here builds and expands on that one: He's an actor who puts the natural emphasis on listening rather than speaking, perhaps recognizing, intuitively or through training, that listening well is much harder to do. Li has made his fortune off the grace and agility of his limbs. But just as we're often so attuned to what actors are doing with their faces that we pay less attention to how they use their bodies, it's possible that Li's great physical gifts have distracted us from his face. He's capable of showing us the merest shudders of feeling, even as he clues us in to the torrents of emotion behind them. In one of the movie's pivotal scenes, Huo's students reveal a secret to him, a bit of information about an event that has changed the course of his life. Li turns away from them and laughs, a quiet laugh that's brushed with so much commingled bitterness and mirth that it's almost terrifying to see, and hear. Even though "Fearless" is laced with stunning fight sequences, none of them have lingered in my memory as vividly as Li's face has: His body may begin the story told in "Fearless," but his face completes it.

I saw "Fearless" with an audience made up largely of average citizens -- not critics -- who seemed eager to see the movie, and I can't remember the last time I watched a movie with a group who went so deeply inside a picture. The women behind me read many of the subtitles aloud, narrating much of the action as it unfolded, a distraction that would normally have sent me around the bend. But what struck me about their response -- so similar to my own response -- was that everything in the movie seemed so fresh to them that they felt compelled to comment on it, even though we've seen many of the movie's conventions before. Almost anyone who has ever seen a movie has seen them before: the hero who seeks honor and truth after suffering a great tragedy, who discovers that he must connect with nature in order to understand himself, who ultimately learns that violence solves nothing. But Yu's images, and particularly Li's face, fool us into thinking those familiar elements are new.

When I have an experience like this in a movie theater (I see a lot of movies with regular audiences, and I generally prefer it), I lament the DVD revolution, even though it has brought us so many advantages. I love the famous story of the Lumiere Brothers showing one of their early experiments to a French audience who had never seen a movie before: When they saw a train steaming toward them on-screen, they rushed for the exits, buying wholeheartedly into the illusion.

I felt that way at "Fearless" -- not terrified of the thing in front of me, but wholly in its thrall -- and I suspect the narrators behind me did too. Afterward, I sensed that, like me, they couldn't immediately shake its spell. They shuffled out of their seats quietly, murmuring about how great they thought the movie was, but not saying much more. Sometimes there's nothing greater than allowing yourself to believe, just for the space of an hour or two, in a locomotive that's bigger than life.