Johnny Knoxville and his crazy pals shock, awe and thoroughly entertain in this frighteningly watchable sequel. 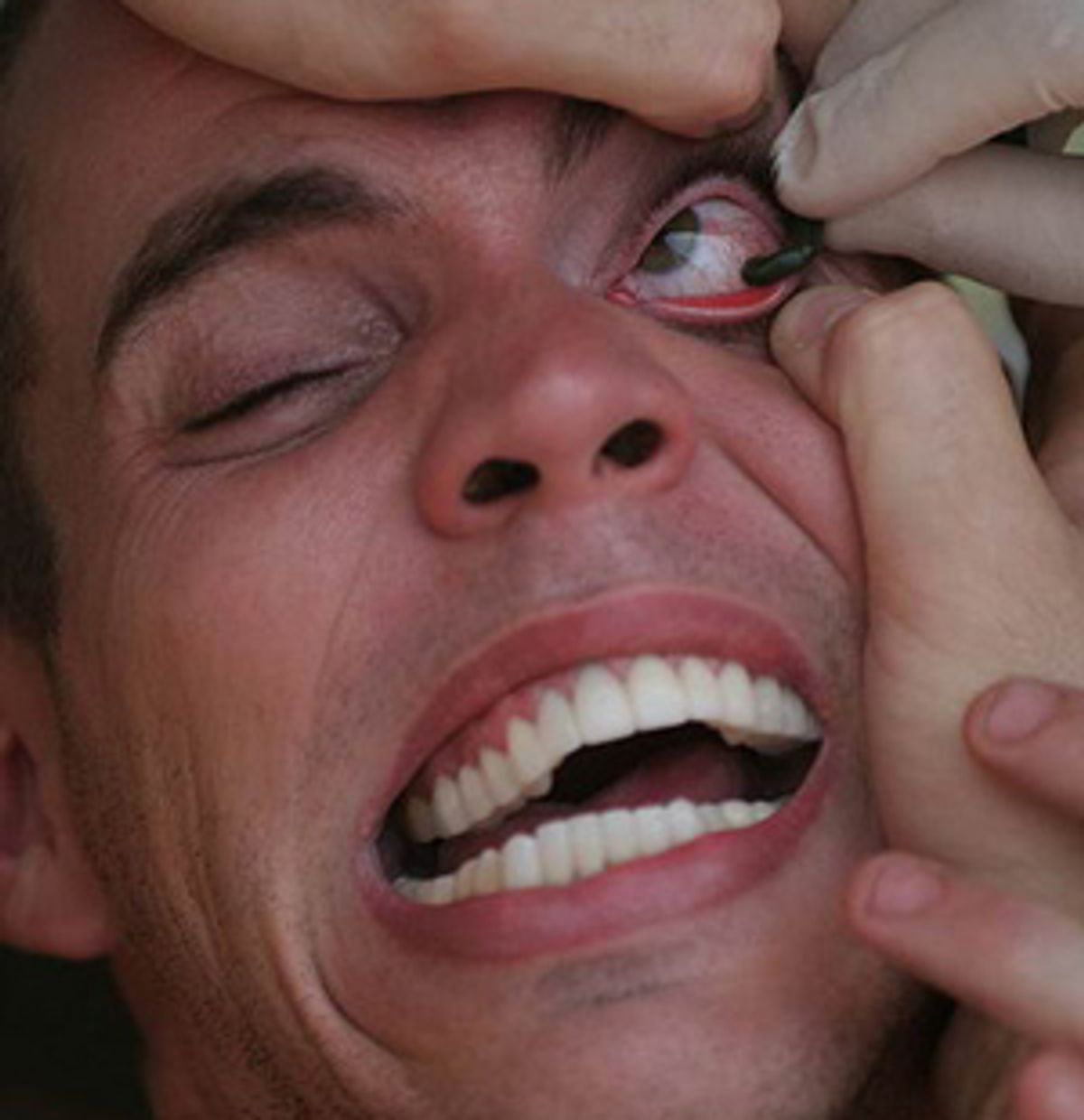 Mel Brooks once said, "Tragedy is if I cut my finger. Comedy is if you fall in a hole and die." That pretty much sums up the ethos of "Jackass Number Two," the follow-up to the elegantly named 2002 "Jackass the Movie," which itself sprang from the loins of the MTV show known simply as "Jackass." "Jackass," which aired from 2000 to 2002, featured a cast of regulars -- including actor Johnny Knoxville and a crew of former pro skateboarders and other daredevil types like Bam Margera, Steve-O and the 4-foot-7 fireplug of nerve and might known as Wee Man -- performing stunts so wild, so risky and so downright stupid that each episode had to be laden with disclaimers warning kids not to try this stuff at home. Even so, a number of deaths and injuries among impressionable copycats were blamed on the show, and Sen. Joe Lieberman, catching the scent of moral disintegration -- or something -- in the air, tried to get the program yanked.

The year the show actually did go off the air -- not necessarily thanks to Lieberman, although he certainly didn't help the show's cause -- bereft fans at least had "Jackass the Movie." Freed from the restraints of all the things you can't show on TV, the Jackass gang pulled out all the stops, turning themselves into human bowling balls (hurtling down the lane on skateboards, headfirst, toward the pins) and eating snow cones doused with their own pee. One of the movie's most brilliant skits was also one of the simplest: The guys hid out in the bushes on a golf course and let loose with an air horn every time one of the stuffy, overserious patrons would take a swing at the ball; then, confronted by the angry golfers, they'd giggle and dissemble, with a "Honestly, mister, it wasn't us!" demeanor worthy of the Little Rascals.

If you saw "Jackass the Movie," you should know that "Jackass Number Two" is more of the same -- and more again. My highly unscientific tally tells me there's a great deal more puke in "Jackass Number Two" than there was in the first picture, but possibly about the same amount of shit and perhaps just a soupçon more blood. (Thankfully, there's no piss drinking in "Jackass Number Two" -- but don't say I didn't warn you about the horse semen.) The stunts range from the ridiculous (Knoxville stands in the middle of a pen, blindfolded and wearing a red shirt, and allows himself to be charged by a wild yak) to the even more ridiculous (one of the guys dresses his penis in a mouse costume and offers it to a hungry snake). In a favorite "Jackass" gag, Knoxville and Spike Jonze, a creator of the show and one of the producers of both movies, with the help of makeup and prosthetics, transform themselves into old people who strut around town doing rude things: In "Jackass Number Two," Jonze becomes Gloria, a 90-year-old "slut" with a penchant for walking the streets with her blouse hanging open, revealing a set of woefully stretched-out hooters -- they hang from his bony chest like two pieces of shriveled, rejected fruit.

Many of the "Jackass" routines are designed to shock, or at least to awe. When Steve-O allows a live leech to be applied directly to his eyeball, you not only can't believe what you're seeing but really don't want to be seeing it. Yet I couldn't look away, and neither could anyone else in the audience I saw the movie with. We hooted and hollered at the screen, captured by a single involuntary impulse.

If there has to be a key to "Jackass Number Two" -- other than the pleasure of laughing at crass, rude, wholly inappropriate humor -- maybe that's it: The movie unites us by turning us into a club of people who may at times do stupid things, but who staunchly draw the line at doing anything this stupid.

"Jackass Number Two" is filled with sub-junior-high antics, carried out by a bunch of tattooed and scarred muscle-bound guys who are definitely old enough to know better. It's possible that the Three Stooges are more overtly sophisticated, and while I laughed a lot during "Jackass Number Two," I confess to feeling a bit weary and worn out by the end -- although I perked up considerably for the movie's finale (and please stop reading here if you plan to see the movie and want to be surprised): an absurdly entertaining Busby Berkeley-style production number that features the guys, in an assortment of costumes including cowboy outfits and faux-tux T-shirts, singing (not so well) and dancing (which, maybe not surprisingly, considering the physicality of their nutso stock in trade, they're actually not bad at).

That dance number is atypical. Perhaps even the Jackass guys have grown a little weary of their own shtick and thought they'd throw in something different, something a little extravagant, just for fun. Beyond that, though, part of what makes "Jackass Number Two" so frighteningly watchable -- even against your better judgment -- is the way the guys delight in one another's bumps, bangs and bruisings: First, they feel one another's pain; then they laugh like hell. Their knuckleheaded camaraderie is the goop that holds the enterprise together. They laugh till it hurts, because anything less is just half-assed.