More than an Alpine playground, Europe's most beloved mountain range has provided the dramatic backdrop in novels by Hemingway, Greene and Salter. 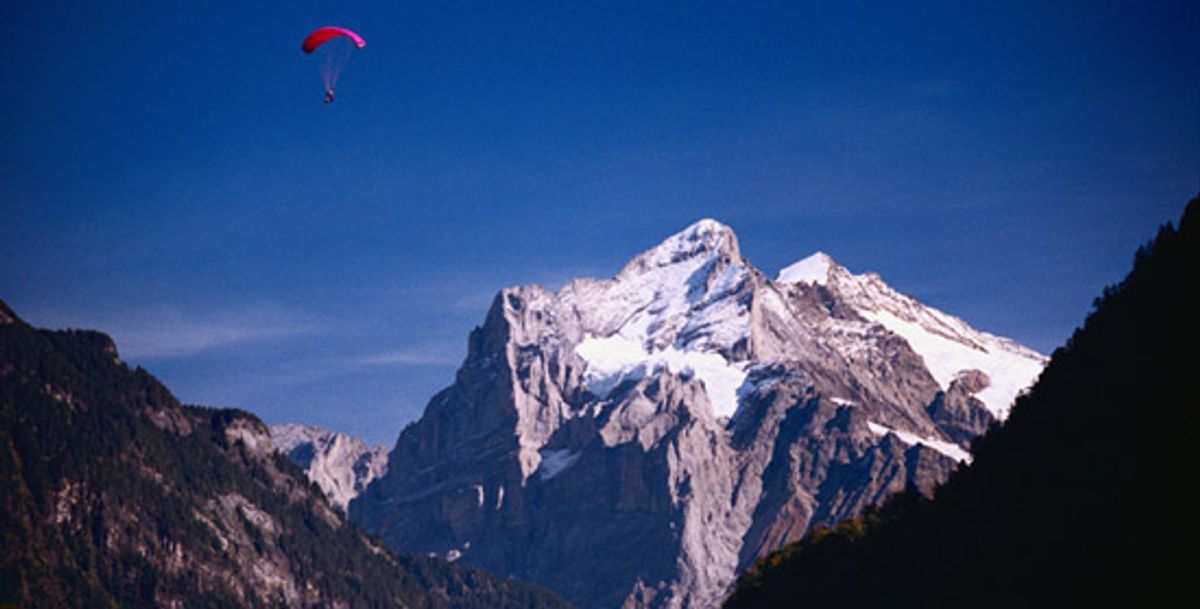 If, like Gore Vidal, you think of Hemingway as humorless, you might look again at this late passage in "A Farewell to Arms" (1929) where two border officials compete for the attention of a foreign couple, arguing over which idyllic Swiss resort offers the best winter sport: Italian-speaking Locarno, where they are standing, or Francophone Montreux, on the eastern end of Lake Geneva where the little Montreux-Oberland Bernois railway rises steeply above the town and runs deep into the Alps, toward Gstaad. The comedy anticipates the sorts of polite hostile exchanges one would later find in Beckett and Pinter. In Montreux, says the one official, there are possibilities for "luge-ing," adding perhaps unnecessarily, "Luge-ing is certainly winter sport." His colleague turns to the foreigner: "Is luge-ing your idea of winter sport, sir? I tell you you would be very comfortable here in Locarno." It continues:

"The gentleman has expressed a wish to go to Montreux."

"You see he has never even heard of luge-ing!" That meant a great deal to the second official. He was pleased by that.

"I beg to differ," the other official shook his head. "I must differ again. The toboggan is very different from the luge. The toboggan is constructed in Canada of flat laths. The luge is a common sled with runners."

But Montreux it is. ("I congratulate you," says the first officer; "I believe you will regret leaving Locarno," says the second.) The end of the road will be nearby Lausanne, with death in a Swiss hospital, whose conventions are well known in literature -- from the sanatorium in the high alpine station of Davos in Thomas Mann's "The Magic Mountain" (1924), to the Zugersee psychiatric clinic in F. Scott Fitzgerald's "Tender Is the Night" (1934) and the Vevey hospital where, in Graham Greene's "Doctor Fischer of Geneva or, The Bomb Party" (1980), the narrator's young wife meets her end after a ski accident in Les Paccots (which isn't quite the Alps but geologically close enough: the Préalpes, whose name speaks for itself).

The great mountain range that is the Alps forms a 750-mile-long crescent, with one tip in southeastern France reaching almost right down to the Mediterranean (the Alpes Maritimes), and the other in the Julian Alps of Slovenia, with the Italian lake district propping up the southern flank. In between lies over half of Switzerland, three-quarters of Austria, and a nice helping of Bavaria. There is no more awesome landscape on the European continent. The Alps invite speculation into our mortality because mountains, after all, are dangerous; writers (usually male) attracted to danger and physical risk, and interested in locale, will naturally attend. The immensity of these gray solemn peaks capped by snow seems to dominate even the skies above, inspiring in visitors a rare solitude in a crowded continent.

The exquisite novel "Solo Faces" (1979), by James Salter, manages to be solely on the subject of mountains and their constant peril for those who fixate on them: testimony to the author's own general preoccupation with greatness and great acts, with the spirit expressed purely without distraction or contamination. In "Solo Faces," the American Rand climbs the French Alps at Chamonix for feelings both aesthetic ("The most hazardous attempt is made beautiful by its rightness") and emotional, for the "feeling of invulnerability ... as if the mountain had ordained him." There is also the ethical question, for climbers: "The classic decision is always the same, whether to retreat or go on."

Mountaineering, then, more than skiing or even lugeing, is the primary focus of alpine books. "Mountain-scrambling," Edward Whymper, first man up the Matterhorn, called it, and the Englishman's account of that climb (preceded by several failures) and others, "Scrambles Amongst the Alps in the Years 1860-69," remains an engaging read; its liveliest characters are not so much Whymper or his gentlemanly companions but their rough native guides ("strangely-apparelled and queer-faced men") and innkeepers. Four men died on the descent from that first Matterhorn triumph, which Whymper describes prior to some final moralizing: "We know that each height, each step, must be gained by patient, laborious toil, and that wishing cannot take the place of working ... we come back to our daily occupations better fitted to fight the battle of life." If they come back at all! As a philosopher of life, Whymper is facile; but the succinctness of his expedition descriptions rather compensates. The mountains themselves, except for their technical features such as ridges and cols, remain mostly unrecalled. Whymper has learned his own lesson, that the "ablest pens have failed, and I think must always fail, to give a true idea of the grandeur of the Alps."

Much alpine writing takes place on the periphery: You need a place to start from, after all. A trip into the Alps begins in the valley, from a place like Hemingway's Montreux (also Nabokov's, who lived out his final years in the Montreux Palace Hotel; and Fitzgerald's, whose protagonist Dick Diver passes through town), where the Rhone River flows into Lake Geneva heading west toward Geneva itself. Vevey, on the lake 10 kilometers west of Montreux, with heart-raising views of the Alps south and east, is a popular literary stopping place; Henry James' Daisy Miller stayed at the Hotel des Trois Couronnes, which still exists. Less glamorously, Jones, from "Doctor Fischer," worked at the glass chocolate headquarters of Nestlé, in Vevey, translating documents and returning to a small flat with no view. It will be noted that alpine fiction is, almost invariably, about expatriates, with nationality depending on authorship: Jones (Graham Greene) is British; Hans Castorp, who spends seven years in that Davos sanatorium (probably since converted, like many such institutions, into an expensive hotel for the likes of Bill Gates visiting January's World Economic Forum), is a north German like Thomas Mann. Even in 1924 Mann could see the coming changes, with the village "swallowed up" by the resort's "extending further and further toward the entrance of the valley ... Hotels and pensions, amply equipped with covered verandahs, balconies and reclining-halls, lay on both sides of their way."

One of my many jobs during nearly a decade of winters spent primarily in the Swiss Alps was manager of a four-story apartment hotel with, like all buildings that size, a substantial bomb shelter in the basement. Before the snow came the Swiss Army did: reservists from the Francophone Rhone Valley and Vaud, wine-making regions where families sent local vintages to the soldiers to drink in the evenings after their long days blowing things up in the mountain woods. As hotel manager I watched the empty bottles come down each morning from the rooms, admiring the esprit de corps of men who, although formidably trained and armed and apparently dutiful in their other, professional lives, hardly took themselves seriously. No book could better express this sardonic, unassailable state of mind than John McPhee's "La Place de la Concorde Suisse" (1984), which I read before my acquaintance with the Swiss Army and again after, where the author tags along with a mountain patrol playing war games that, inexorably, lead the group to a cozy small restaurant serving fondue and wine. "Two companies of enemy motorized fusiliers have reached Raron," says the group leader into his walkie-talkie, while behind him the customers moo, like the cows in the alpine pastures the soldiers are meant to be reconnoitering. "Fifteen army vehicles have been destroyed." He turns the device upside down to stir the cheese with its aerial.

So far, nothing of Austria, the most alpine country of all. But we can end as we began, with Hemingway, not "A Farewell to Arms" but "A Moveable Feast" (1964), which is famous for being a book about Paris. So it is, but for its poignant final chapter, set in Schruns in the Austrian Voralberg where the author takes up skiing, revels in the good company of locals and especially family: wife Hadley and baby Bumby. The idyll is soon to end, the author knows, with more than 30 years of hindsight encompassing three more wives; already another liaison has begun. But while in Schruns the three, or two, were happy and strong; "It wasn't until we were out of the mountains in late spring, and back in Paris that the other thing started again" -- so a final theme: the Alps as sanctuary.