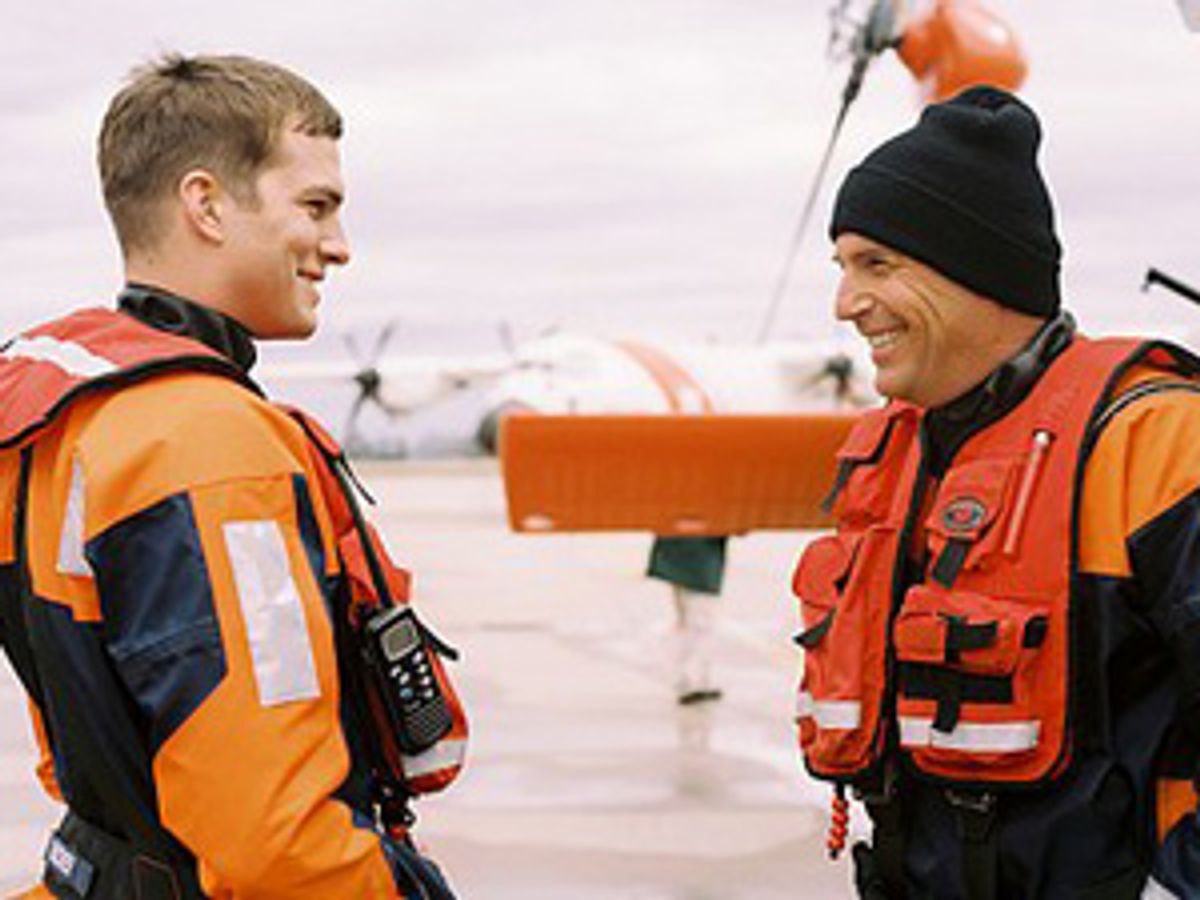 In the old-guy/young-guy mentor drama "The Guardian," Kevin Costner plays Ben Randall, a veteran Coast Guard rescue swimmer whose life has been scarred by tragedy; Ashton Kutcher is young swim champ Jake Fischer, a kid whose hubris masks his own secret bummer. They meet when Randall takes a breather from rescue work to lead an elite training program for young recruits who hope to become rescue swimmers.

"The Guardian" isn't the trimmest picture: Like so many contemporary action-adventure movies, it can't settle on just one ending -- it needs to tack on an extra two or three cappers, just for kicks. But even if it's more whale than dolphin, it skims confidently through the paces: There are plenty of basic-training humiliations and triumphs, numerous tense rescue-at-sea sequences -- and a romantic subplot, so teenage girls (and boys) will get plenty of chances to see Kutcher without his shirt, both in and out of the water. (His upper torso is a perfectly sculpted wedge that's both classical and aerodynamic -- Kutcher is an Adonis for the MySpace age.)

As a story of courage and personal growth, "The Guardian" is perfunctory, a saga of character building that could (and may, advertently or otherwise) serve as a Coast Guard recruitment vehicle. But it's far more interesting as a tale of two faces: Kutcher and Costner have a kind of visual chemistry that's just as elusive as the other kind. And the connection and contrast between them remind us that Hollywood isn't as forgiving of older male actors as we like to think.

After some sound early performances -- it was hard not to respond to his rough-and-tumble, Lifebuoy-and-leather casualness in "Bull Durham" -- Costner became nearly impossible to watch. It was as if some internal gear had locked up inside him; he often seemed like a stuck-up athlete who was certain he could do anything and more often than not fell short of delivering.

But Costner's performance in "The Guardian" is fascinating, partly because he nimbly finds his way around some pretty crummy dialogue, and partly because his face alone is something of a silent essay about what it means for a man to age in Hollywood today. When it comes to getting decent roles after age 50, there's no doubt actors have it easier than actresses do: Watching the desperation (and the surgical face shifting) that so many aging actresses succumb to is frustrating, and heartbreaking, but it's certainly understandable.

In the end, though, who among us is particularly happy about growing thicker around the waist, about seeing all those lines radiating from the eyes? Women often claim victim status in our youth-obsessed culture, but we're not the only ones who suffer. And so watching Costner in "The Guardian" -- he's 51 -- is pleasurable in a surprising way. It's simply a relief to see an actor act -- and look -- his age.

Costner looks good, but he definitely looks different: His hair is sparser and grayer, and his neck has thickened up -- from certain angles, I felt I was catching glimpses of James Caan. He's got a nicely matched set of crow's-feet, probably at least partly the result of all that manly squinting into the sun he used to do -- but hey, he owns them. Cinematographers often moan and groan (sometimes just in fun, and sometimes not) about having to be so careful about the way they light actresses. I wonder if the D.P. on "The Guardian," Stephen St. John, had special instructions to intensify the age contrast between Costner and his young costar (Kutcher is 28). In the first scene in which the two have lines together, Costner looks weather-beaten and a bit tired, in other words, exactly as he ought to, considering he's portraying a guy whose wife (played by Sela Ward) has just left him and whose job of saving other people's lives has sapped some of his own life from him. Kutcher, as the young recruit, is shot as if he were Norma Shearer: His skin looks like polished ivory, with a slight translucence.

Costner has no vanity here. In a few scenes, he wears one of those little knit watch caps pulled low over his eyes -- his face looks small and squinched, a brief, flashing preview of what he might look like at 70 or 80. He's not fending off catty snickers of "Boy, he looks old," he's inviting them -- it's practically a taunt -- and there's no way that doesn't take guts.

We definitely have expectations we want all actors to meet. Those expectations are lower when our actors are young: I've seen Kutcher in some half a dozen movies now, and I still can't be sure if he has any gifts as an actor. He does have some charm -- he's so relaxed that he slips over the edge into outright goofiness, and that can be endearing. I don't know if he performs for an audience so much as punks it: I've never walked out of an Ashton Kutcher movie thinking, "Wow, that kid was good," but I'm usually left with a pleasant, if vague, recollection of having liked him. (Also, while the costumes in "The Guardian" aren't exactly a feature, in one scene, they help Kutcher locate some of the boyish awkwardness of his character: Walking through a watering-hole parking lot with Randall, Jake's wrists jut out from the cuffs of his too-short Coast Guard-issue bomber jacket -- he's outgrowing men's clothes literally even before he's grown into them figuratively.)

But we demand more of older actors -- we want their sex appeal to have more gravity, more ballast, more something -- and it seems that Costner is looking for new ways to meet those expectations. How far he's able to go, or willing to go, remains to be seen. But for now, it feels like a blessing to see a fiftyish face in the movies that hasn't been pruned and planed and polished. Costner looks like himself. It has been a long time coming.