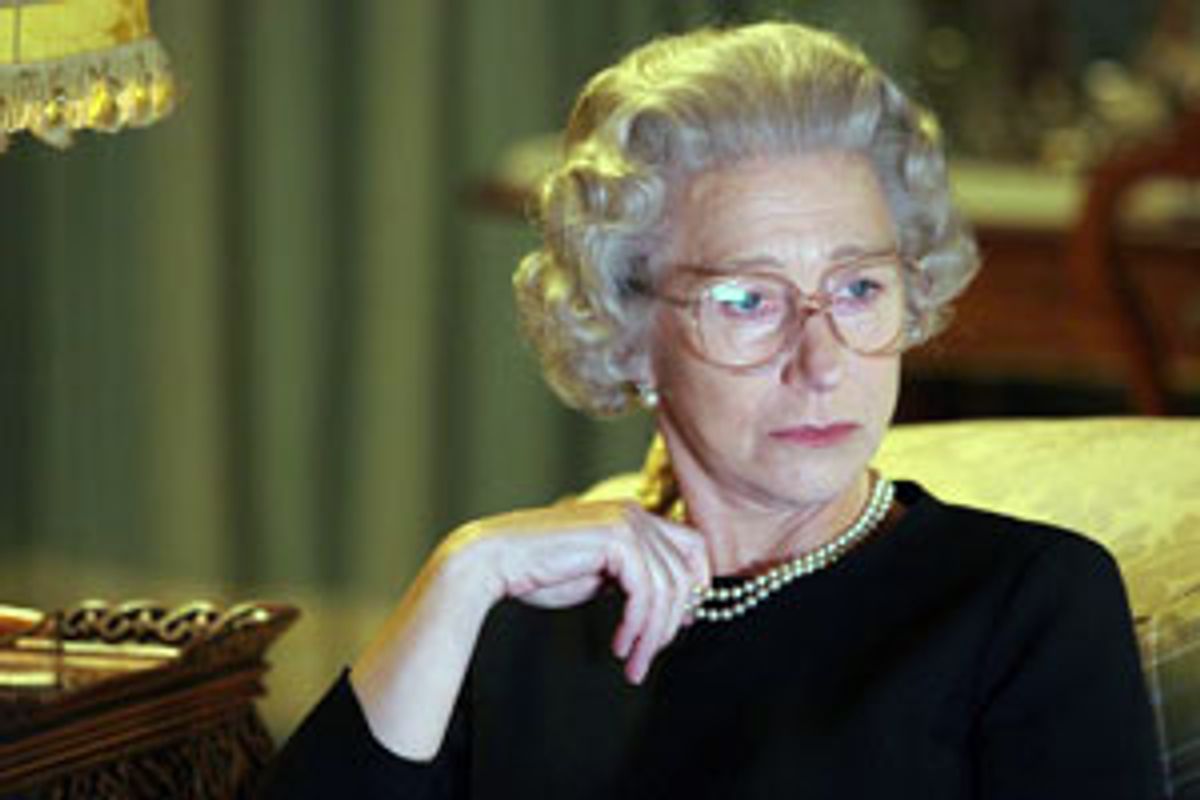 To look at Queen Elizabeth now, a symbol of privilege and unyielding propriety, with those tightly managed gray curls, that heavily practiced smile, those enormous straight-from-the-Wolery specs, you wouldn't know that as a girl queen -- she ascended the throne in 1952, at age 25 -- she wasn't half bad-looking. As part of a bit he once did about the death of Princess Diana, the comedian Eddie Izzard took a detour to make some observations about the young Elizabeth II of the '50s, admitting that he found her kind of sexy -- "Hard to believe," he noted, in the way you do when you're attracted to someone in spite of your better judgment. He said that she ought to have spent her youth driving an S-type Jag, smoking cigarettes, telling any cop who might dare to pull her over for speeding, "Fuck off, I'm the queen!"

Izzard's Elizabeth II is only a fantasy monarch, a queen who might have been. But the routine may have been Izzard's way of building a sympathetic bridge between Elizabeth II and the daughter-in-law she so clearly disliked, Princess Diana: Diana grabbed the privilege of acting her age in a way Elizabeth II never would have dared, even if she'd wanted to. (And no one can ever know if, maybe just the littlest bit, she ever did want to.)

Stephen Frears' "The Queen" (which opens the New York Film Festival on Friday and will roll out in other parts of the country in the coming weeks), a fictional reading of what might have happened in the week following Diana's death, is another kind of bridge between the two figures. The story begins as a comedy: Who doesn't like to make fun of Elizabeth II, who was old guard even 30 years ago, when the Sex Pistols flipped her the bird? But Frears knows that great comedy is often only a flea bite away from tragedy. Working from a dazzling script by Peter Morgan (who also co-wrote "The Last King of Scotland"), he uses our laughter, and even our derision, to lure us into a place where we can feel only sympathy for a woman locked in a gilded cage of tradition and duty. Often, it takes a fiction to succeed where reality fails. It's part of the real queen's duty to hide the fact that she's human. "The Queen" tears off the royal robe and suggests that, despite what Johnny Rotten said, she is a human being.

The movie opens in the spring of 1997, just as Tony Blair (played here, with the perfect degree of bright-eyed eagerness, by Michael Sheen) has won the election, ushering in the briefly euphoric era of New Labor, which promised to modernize Great Britain. But you don't just waltz into the prime minister's job: You have to be invited by the queen, and so Blair -- accompanied by Cherie, played by the wonderful Helen McCrory as a hissing, petty schemer -- shows up at Buckingham Palace to receive his mandate.

The woman he goes to meet is played by Helen Mirren, but she's a hundred times more intimidating than Helen Mirren is. (This is an actress who makes most men I know, and plenty of women, go weak at the knees.) We already know what she thinks of Blair -- she's appalled, for one thing, that he expects to be called by his first name -- and we see it on her icily composed face as she allows herself to be greeted.

Elizabeth's role, as she puts it, in crisp, fruity tones, is to "advise, warn and guide the government of the day." And also, she might have added, to intimidate the bejesus out of it. Ascertaining that Blair has three children, she turns away from him and mutters the words "Such a blessing, children" as if it were less than an afterthought. Later, she informs him that he's "her" 10th prime minister and wastes no time setting out the largest possible shoes he'll never be able to fill: Churchill, she notes, once sat in the very chair he's just settled into. But then she adds, in a line that alludes to some remaining shred of modesty and insecurity -- a line that presages the ways in which this seemingly predictable character is going to surprise us -- "He gave a shy, young girl like me an education."

The accident that kills Diana, Princess of Wales, occurs just a few months after this first meeting with Blair. The queen refuses to acknowledge the incident publicly, and even, at first, suggests that the grief-stricken Charles (Alex Jennings) take a commercial plane, instead of a royal one, to Paris to retrieve the body. (Jennings' performance is superb, stretching beyond caricature. No matter that Charles' ex-wife had infuriated and frustrated him: The guarded pain he shows upon learning of her death envelops all of those complicated feelings, as well as the reality that she's the mother of his children.)

"The Queen" details the ways in which Elizabeth, supposedly a master of control, continues to mishandle the event, much to Blair's frustration. At one point, realizing that the grieving public is becoming furious with the royal family for failing to recognize Diana's death, he sputters to his aides, "Will someone please save these people from themselves!" Elizabeth, Prince Philip (a wonderfully tweeded-up and daft James Cromwell), and the Queen Mother (Sylvia Syms, watching the whole spectacle through eyes that are more amused than disapproving) do what any family of self-respecting royals would do after a much-reviled erstwhile family member has been tragically killed: They continue their holiday at Balmoral, where Philip takes the grandkids out to pursue a regal stag that's been spotted on the estate and Elizabeth tromps around defiantly in a Barbour and sensible oxfords, as if feeling the earth beneath her feet were the surest way of surveying her kingdom.

Yet in Frears' eyes, and in the eyes of his actors, not even royal feelings are that simple: Diana is barely a presence in the picture, but a few judiciously chosen real-life film clips suggest both her charm (very real) and her clever manipulations (also very real). We see Mirren's Elizabeth watching some of these moments on her own television (she's huddled in bed in a mohair dressing gown, a tonier version of the fleecy zip-up housecoats worn by women of her age all around the world), and the subtle shifts in Mirren's expression show us how they both infuriate and pain her.

Mirren's performance is glorious: Rather than impersonate the queen -- which would have been all too easy to do -- she reaches deeper to locate the buried, calcified thoughts and feelings that might guide this deeply inscrutable woman. At one point, she's driven to rare tears over the Diana predicament. Frears and Mirren don't show us those tears, but Mirren tells us everything we need to know, even though all we see is the back of her head. Then she spots the stag that Philip and the grandchildren have been after. His magnificent antlers mark him as a creature who has eluded capture for many years: His nobility earns him the right to be admired, and then shot, a truth that's not lost on the queen as she gazes at him. She shoos him away -- this fellow old-timer who understands the meaning of the ground beneath his feet -- hoping to keep him alive just a bit longer.

The landscape, including that stag, plays almost as big a part in "The Queen" as the faces do. The picture was shot, beautifully, by Affonso Beato, whose credits include Pedro Almodóvar's "All About My Mother," and it's a particular stroke of genius to enlist a Brazilian-born director of photography to shoot the Scottish countryside: This is a place of rough, thriving beauty, filled with life, a place that will always push back against the royals' stiffness. To feel that, we need to see the countryside as something other than the usual postcard views of the Highlands, and Beato opens our eyes anew.

Maybe the idea is that not even the royal family -- a family of hunters and horsey types -- can ever really tame the country they've been bred to serve. In real life, Elizabeth II was slow to realize that no matter how she felt about her former daughter-in-law, she was betraying the people she had sworn to serve by failing to acknowledge Diana's death. "The Queen" suggests that the superhuman task Elizabeth II has taken upon herself -- that of ruling the United Kingdom, which no longer wants or needs ruling -- means she has to work overtime to hide any human frailty or weakness. You'd have to be a hardhearted bastard not to feel something for someone saddled with such an impossible, ludicrous burden.

I suspect plenty of moviegoers -- Stateside but maybe especially in the U.K. -- will read "The Queen" as an apologia for the monarchy. But I think that's giving the picture only its most superficial reading. As many of the detractors of Sofia Coppola's upcoming (and wonderful) "Marie Antoinette" have failed to grasp, being a humanist doesn't automatically make you a royalist.

And, sympathetic as Frears' imaginary portrait is, I don't see it as fawning. His ultimate vision of Elizabeth II -- a vision Mirren puts into a superbly rounded shape -- is as a tough old broad, a warrior who'll go to her death in an armor of twin sets and tartans, defending the notions of tradition and honor that she was raised to believe in. She will persevere, God willing, as a figurehead to her people, if not so much a leader. "The Queen" is the fantasy version, rooted in truth, of Eddie Izzard's wish for Elizabeth II. She finally gets to say, "Fuck off, I'm the queen!"