In a powerful TV ad, Iraq and Afghanistan vets attack Republicans who voted against funds for body armor. GOP, beware. Dems, wake up. 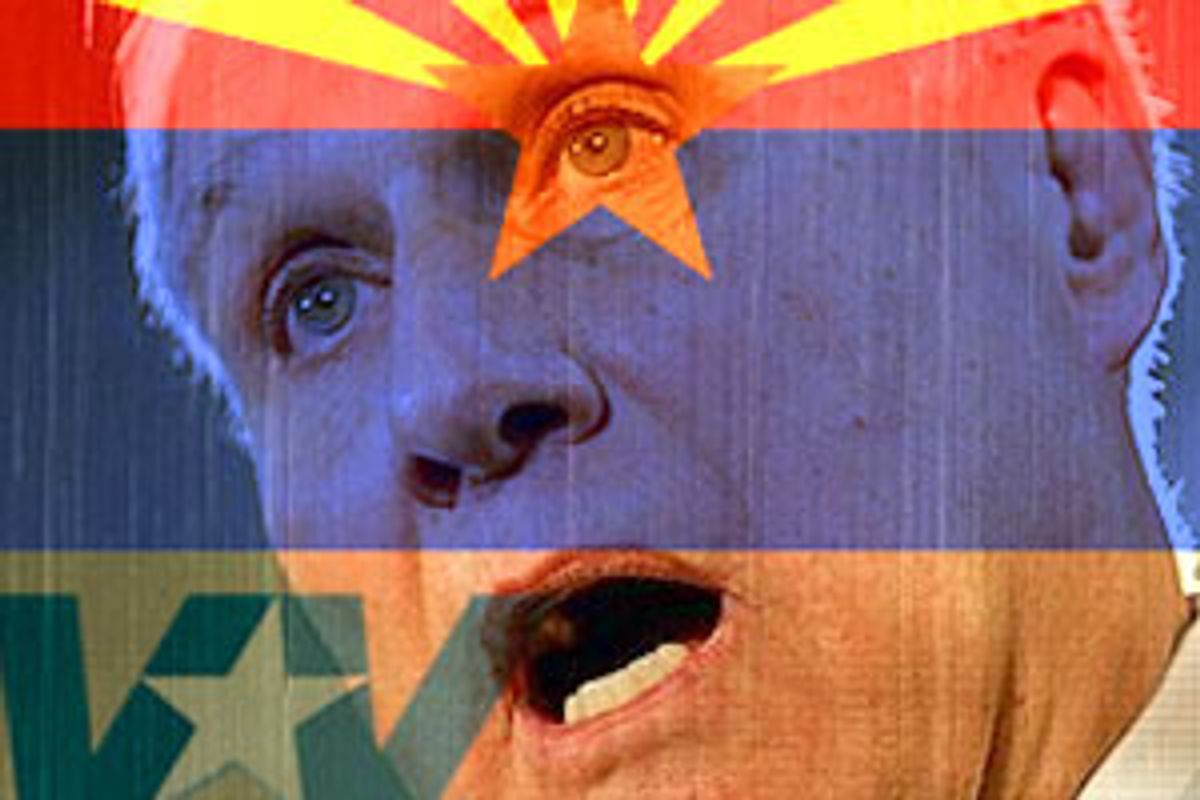 Rarely does an incumbent U.S. senator panic over the possibility that a new and little-known advocacy organization might broadcast a political attack in his home state. Yet the mere prospect of confrontation with VoteVets.org -- a political action committee organized by military veterans of Iraq and Afghanistan -- seems to have frightened Sen. Jon Kyl, R-Ariz., into launching his own preemptive attack on the group.

Two weeks ago the second-term senator, who faces a spirited but uphill challenge from state Democratic Party chairman Jim Pederson, charged into the Phoenix offices of the Arizona Republic, the state's largest newspaper. He told the newspaper's editorial board that he anticipated an imminent assault from VoteVets, which had started running a dramatic television ad in Virginia, accusing Sen. George Allen of failing to provide adequate body armor to thousands of American troops in Iraq. Four days later, the paper dutifully ran an editorial criticizing the ad as "deceitful."

What Kyl accomplished, of course, was to provide precious free publicity to the veterans -- and to encourage them to buy airtime in Arizona, where they never had any intention to advertise.

"The irony of it is, we hadn't even planned on running an ad against [Kyl]," said Jon Soltz, the former Army logistics captain who serves as executive director of VoteVets. "But since he seems so eager to talk about this issue, we've reconsidered, and we're releasing the ad on his votes against body armor for the troops so we can discuss it." The VoteVets media team quickly arranged to send the ad to every newsroom in the state with a new punch line hitting Kyl.

Produced by independent media consultants Bill Hillsman and Bob Grossfeld, the ad (which can be viewed here) shows a young Army Reserve vet in the desert, firing an AK-47 into a pair of dummies wearing different armored vests. One vest stops the bullets, but the other doesn't. The ad blames the Republican senators who refused to appropriate money for the newer and more effective armor. Markos Moulitsas Zuniga of Daily Kos called it "more relevant and hard hitting than anything else I've seen this cycle."

Shortly after the ad's first appearance in Virginia earlier this month, its claims were disputed by FactCheck.org, a "nonpartisan, nonprofit" Web site that claims to "reduce the level of deception and confusion in U.S. politics." The FactCheck critique charged that the specific vote cited in the ad -- an April 2003 amendment to the supplemental defense appropriations bill sponsored by Louisiana Democrat Mary Landrieu that was defeated on a party-line vote -- had nothing to do with body armor. It went on to insist that the scarcity of adequate armor had nothing to do with funding, as the ad implies, but occurred only because of manufacturing and supply bottlenecks. The ad's accusation against Allen and the rest of the Senate Republican majority, said FactCheck, was false.

Soltz and the media team at VoteVets responded nimbly to FactCheck. They corrected a minor mistake (about the vintage of the older vest in the ad), bolstered their argument by defending the reference to the Landrieu bill and cited further proof that Republican senators had voted against full funding for body armor -- namely, an amendment sponsored by Connecticut Sen. Chris Dodd in October 2003. The progressive media analysts at Media Matters entered the debate with a powerful rebuttal of the FactCheck critique and the Arizona Republic editorial.

Media Matters pointed out that although Landrieu had not mentioned body armor in her floor speech on the amendment, her press release the following day identified the items she meant to fund in the "Unfunded Requirement Lists" compiled by the National Guard and Army Reserve, including the "shortage of helmets, tents, bullet-proof inserts, and tactical vests." Six months later, when Dodd sought a similar $300 million amendment, he clearly stated that he meant to ensure funding for up-to-date body armor.

On points the debate went to the vets, who held the moral high ground. The journalistic "fact checkers" looked more like nitpickers, and their intervention actually served to sharpen the veterans' argument.

Now an improved version of the ad is not only up and running against Rick Santorum in Pennsylvania but will soon begin airing in Montana against Conrad Burns.

But the more salient question is not whether VoteVets won the argument, but why the ad scared Kyl so much. The veterans' new brand of political activism -- which also includes support for several Democratic veterans challenging Republican congressional incumbents -- shows that the GOP can no longer take for granted the support of the next generation of military families. Many of today's soldiers and officers are angry at the cynicism and incompetence that led them into the quicksands of Iraq, and infuriated by the treatment they receive from the government when they return home.

"I think there's a feeling among the men and women who fought on the ground in Iraq that the leadership has been poor," Soltz says. "But Republicans have not done a lot to recruit veterans of the Iraq war into politics, and neither have Democrats. That's why we're here, to give these troops the support they need." If Democratic leaders have any foresight -- an arguable proposition at best -- they will get behind these veterans, their ads and their candidates, and lift the Vietnam-era "anti-military" stereotype from their party.