John Kennedy Toole, Ernest Gaines and the recipes of Enola Prudhomme will instruct you in the sorrows and joys of the Bayou State. 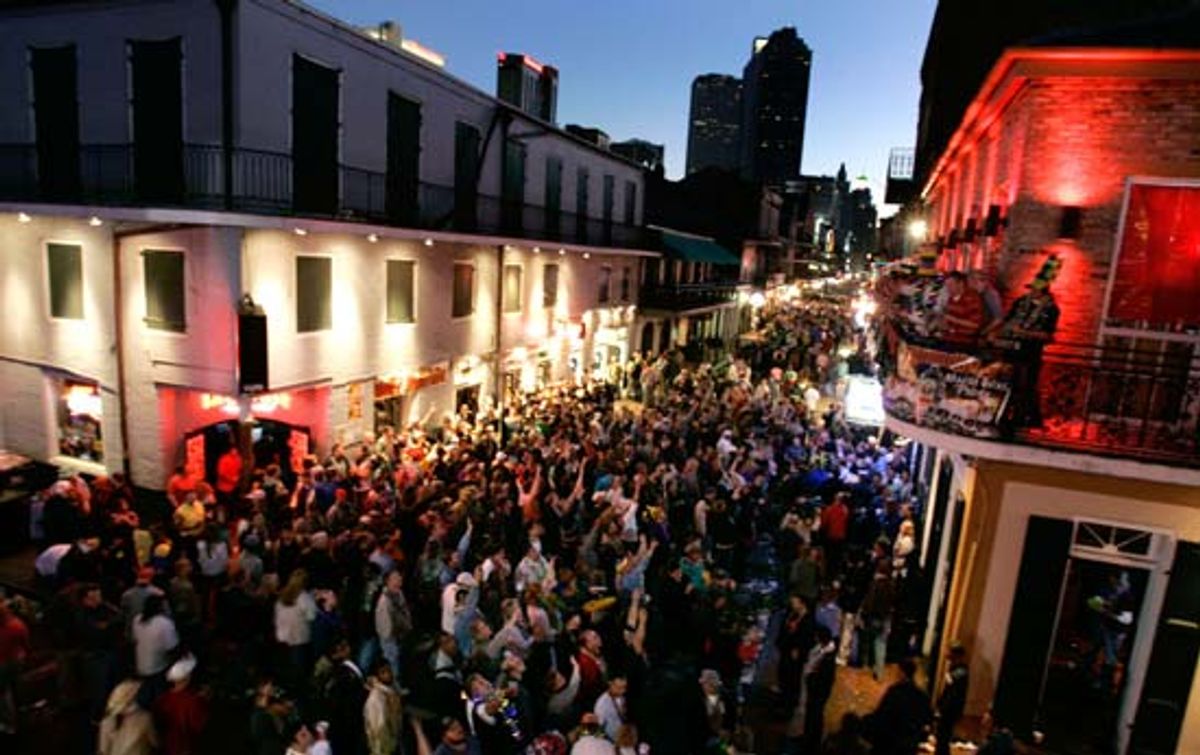 Y'all want to visit a country within a country? Then come to Louisiana. Those of us who grew up here know what a bewitched and mythical place it is, full of the sweetest joys but also sorrows of unending depth. To paraphrase a friend who is one of Louisiana's most acerbic observers: "You love and hate Louisiana on a constant 30-minute cycle, and if you don't, you're not paying attention to it."

Katrina's aftermath only exacerbates what was already a complicated emotional stance of Louisianians, voluntary expatriates, Katrina's forced evacuees, and those who have managed to return to their mother state.

Louisiana is still, and always will be, a world unto herself -- authentic, life-loving, and replete with people who laugh loud, party hard and are friendlier than any clan I've ever known. I encourage anyone who wants to experience a part of the country filled with soul to visit the Bayou State, and I can suggest several books as traveling partners.

First, "A Gathering of Old Men" (1983) by Ernest Gaines. Set on a sugar cane plantation near where I was raised, this story of the bravery of the elderly black men who come together to protect their own against whites who seek vengeance for the death of a Cajun farmer is one of the books that set me on the road to confronting the racism I grew up under. I can see those old men sitting on the porch, waiting, waiting in the heat, racial tension as thick as the Louisiana humidity.

Ernest Gaines left Louisiana when his relatives, who saw his promise, predicted that his potential would be squelched under a segregated and hard-ceilinged social system. He left as a teenager and was gone for more than 40 years, returning to within a few miles of his birthplace after gaining acclaim for his work.

If "A Gathering of Old Men" had me in tears over the racism that permeates not just Louisiana, but this whole nation, "A Confederacy of Dunces" (1980) by John Kennedy Toole, a novel set in New Orleans, will make you laugh your head off.

Hands down, this is the funniest book I have ever read, and it is no small tragedy that Toole killed himself before he saw it in print. After his death at the age of 31, the manuscript was brought to the great writer Walker Percy's attention, who helped get it published. Phrases from this book abound among my Louisiana friends and me. I only wish Mr. Toole were still with us.

This hilarious novel is beloved by New Orleanians who revel in its Pulitzer Prize-winning portrayal of the absurdities of daily life in the crazy Crescent City. For some 30 years, Hollywood has toyed with the idea of a movie version, although the actors considered for the role of its utterly unpresentable protagonist (John Belushi, John Candy) have met sad early demises. At this point, the heir-apparent to the role may well be John Goodman, who has the advantage of generous physical proportions, together with part-time residence in New Orleans and a Louisiana-born wife.

The name "Crescent City" comes from the fact that the early city of New Orleans was defined on three sides by a great curve in the Mississippi River. No book I know of more clearly delineates New Orleans as a city dependent on the river's changes as "Rising Tide: The Great Mississippi Flood of 1927 and How It Changed America" (1997), by John Barry. Barry's account of the flood that altered the geography and culture of the Mississippi Delta, combined with his clear understanding of the greed and ignorance that made the flood so especially devastating, helped me comprehend more clearly the region in which I grew up.

His unforgettable descriptions of the bodies of black men piled on top of sandbags to keep the levee from breaking is burned in my consciousness. Barry's depiction of the inner workings of the city of New Orleans is nuanced and true, and his profound insider knowledge stunned me. "Rising Tide" is deeply related to the devastation caused by Hurricane Katrina. I remain heartbroken at the natural destruction, and furious at the manner in which both of these disasters were handled.

Few know that in the early 20th century, New Orleans was the Houston of its day, hub of transportation and petroleum. The 1927 flood set off its decline; white flight, poverty, crack, crime and New Orleans' inability to find its niche in the American economic engine brought it to its knees in the late century. Katrina will either reduce it to further irrelevance or be the impetus that prompts its emergence as a new and better city.

Whatever form the new New Orleans takes (say that aloud to realize how absurd it all is), it's bound to have Mardi Gras. Why? Because we need the all-out Bacchanalia of Fat Tuesday, just before we start atoning for our sins on Ash Wednesday. It's part of the life cycle, at least in Louisiana. For a glimpse of the wild and soulful denizens of Mardi Gras in all their earthy splendor and neon wackiness, go no further than Kerri McCaffety's "Masking and Madness: Mardi Gras in New Orleans" (2001).

McCaffety set up a temporary studio in a courtyard off Royal Street during Mardi Gras in 2001 and photographed some of the players in the biggest party of this country's most spiritual and profane city. McCaffety's luminous, sensual, funny and resplendent portraits, bathed in soft natural light, provide a unique portal into the spirit and characters of Carnival. A fine introduction by Cynthia Reece McCaffety accompanies her sister's photographs and outlines the history behind the tradition of masquerading and indulging -- a ritual that goes back thousands of years.

For accessibility and excellent taste one could do worse than the efforts of Enola, sister of Paul Prudhomme, the man who brought Louisiana cookery to the heights of marketing success in the '70s and '80s, and who may have been responsible for the near demise of a complete species of fish. His books are on every decent Cajun cook's bookshelf. In a state where graves are dug with forks and knives, Enola's low-fat and low-calorie dishes provide excellent introductions to a culinary heritage where men and women both get into fist fights over recipes.

My motherland, Louisiana, breaks my heart. Right now, New Orleans is badly broken and has barely begun to recover. Send her out a prayer. Louisiana's land, bayous, music, food, joy and suffering suffuse my life and my writing. Her land is shrinking the equivalent of one football field every 30 minutes, thanks to the shortsighted greed of oil companies and their invasive canals, and those who would forever lock the great Mississippi inside fortresslike levees.

I hope you'll read these books, and visit my beautiful, ravaged but still resilient homeland. Sing, dance, eat, pray, sin, enjoy the riches of Louisiana's culture. If you go to New Orleans eat one of the best meals of your life at the Upperline Restaurant -- and tell my cousin JoAnn I sent you. Help Louisiana heal. "Where the river meets the sea," Aaron Neville sings. When I hear Aaron's voice, I hear New Orleans, I hear Louisiana herself, enriched by the African-American culture that gives the state inestimable richness. May this richness not be killed by the criminal way the destruction of Katrina was, and still is, being handled. I hear, "Laissez le bon ton roulez," let the good times roll. I hear unabashed emotion and passion and sadness and dancing that shakes my body and makes me feel soooo good and so unbearably sad. If you go to Louisiana, bring an open heart, your dancing shoes, and a pile of good soft cotton hankies. Both suffering and beauty bring tears to the eye, and Louisiana has both. In spades.

Books New Orleans The Literary Guide To The World Travel