How to keep schools safe

A disaster expert looks at recent school shootings and explains how to protect kids without putting them under lockdown. 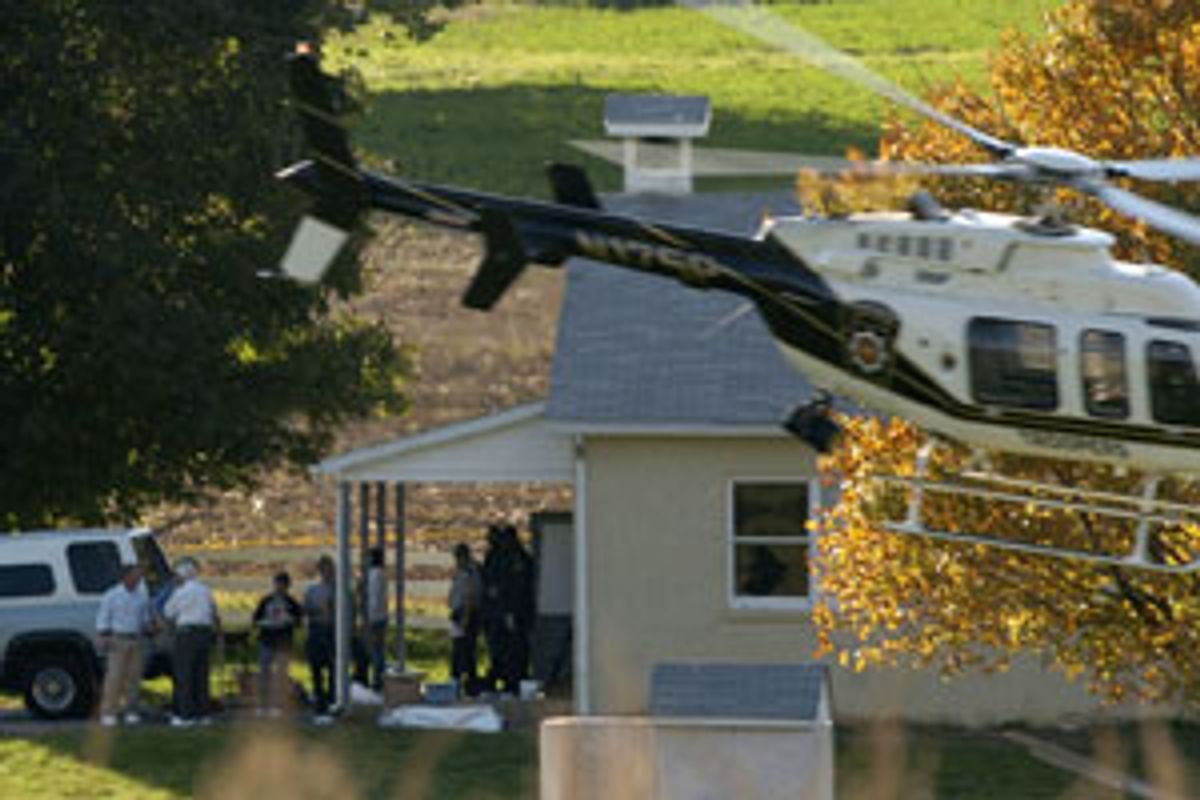 At a one-room schoolhouse in Pennsylvania Monday, Amish schoolgirls, ages 6 to 13, were lined up at the chalkboard, and shot execution-style in the back of the head, before the gunman killed himself. So far, five girls, ages, 7, 7, 8, 12 and 13, including two sisters, have died, while five more remain hospitalized. The Amish school was especially vulnerable, since it did not have a phone, much less any security or emergency plan. Yet, just days before, a 15-year-old student shot and killed his principal in Wisconsin, and at a high school in Colorado, six teen girls were held hostage and sexually assaulted by a gunman, who killed one of them before killing himself.

After three fatal school shootings in a single week, Americans are struggling to understand how schools can be made safer, without transforming them into lockdowns. On Tuesday, the White House announced plans for an upcoming summit on school violence with education and law enforcement officials, while President Bush, speaking in the courtyard of George W. Bush Elementary School in Stockton, Calif., expressed his and Laura Bush's sorrow about the shootings.

Yet, in recent years, the federal dollars spent on protecting schools have actually been cut significantly, and are set to decline further, according to Irwin Redlener, director of the National Center for Disaster Preparedness at Columbia University's Mailman School of Public Health. Redlener is also president of the Children's Health Fund, which dispatches mobile pediatric care units to children in need, and which he co-founded with singer Paul Simon. Since Hurricane Katrina, its mobile units have treated more than 20,000 people in the Gulf Coast region.

In his new book, "Americans at Risk: Why We Are Not Prepared for Megadisasters and What We Can Do Now," Redlener delivers an indictment of how unprepared the U.S. remains for major disasters, both natural and man-made, despite the tens of billions that we've spent on safety since 9/11 and Hurricane Katrina. And he paints a grisly scenario of an even more horrifying attack on American schools than those of the past week, imagining a terrorist attack on an American school, like the one that killed more than 180 children in Beslan, Russia, in 2004.

With more than 95,000 public schools in the U.S. and more than 27,000 private ones, school shootings remain exceedingly rare, but Redlener argues that they're especially traumatic for the public. Interviewed via phone from New York, he told Salon what steps he thinks that schools, parents and the government should take now to improve the safety of American children when they're in the classroom.

What should we learn about the vulnerability of schools from these shootings in the past week?

The recent tragedies are a reminder about how vulnerable not just schools, but our children actually are as targets of everything from family violence to terrorism. Harm to children has an emotional overlay that is incomparable with any other kind of societal violence. When children are injured deliberately, especially in these horrific, highly publicized circumstances, the societal impact is particularly severe and emotional. Whether it is people trying to make a statement or individuals with very serious psycho-pathology or terrorists, they can achieve significant levels of attention and response from targeting children.

How could schools be made safer without making them fortresses?

We definitely do not want to create a physical or subjective sense that the schools are going to have to be turned into armed camps. A fortress mentality in schools would have a significant downside that we need to avoid. It would change the atmosphere from a safe environment aimed toward learning to an institution that is so potentially dangerous as to require a high level of defensive measures to make children seem safe. The backlash from such measures would be to create an environment of fear and tension in schools, both of which would be not at all conducive to an open learning atmosphere where there is emotional support for children who are developing at various stages of their education.

The trick here is to find ways of improving the security of schools without creating this fortress mentality.

What are some good steps to take?

We definitely need to have a better sense of control of access to schools and school grounds. Points of entry can be limited. A reasonable degree of assessing who is coming into the school and for what purposes is entirely appropriate, even a desk at the front door or a non-threatening security person at the front gate of a schoolyard, making inquiries -- "Why are you here? Who are you here to see?" -- if you're not a regular member of the school community. That alone, while obviously not at all fail-safe, would impose a level of deterrence for many would-be evildoers.

Every school in the private and public sectors should have a clear, well-thought-out, and regularly practiced emergency plan that would encompass a variety of scenarios, and that would be familiar to all officials and students in the school. This is very important, and I think that step alone would help mitigate some of the potential disaster that would come from chaos in an environment where thinking about emergencies long before they happen has not occurred.

Didn't the Colorado school have an evacuation plan, which helped?

Exactly. As far as people can tell right now, that is the case. So, that was one of the good parts of that situation. On the other hand, they didn't do very well in terms of the access to the school in Colorado. The shooter was in the school for 35 minutes before anything started.

What should schools be doing?

It's important to develop ways within schools to identify as early as possible troubled individuals -- students, staff, teachers -- who might need attention, before something terrible happens. So, schools can develop early-warning systems that define the responsibilities of colleagues, and even students, to bring attention to situations that might be of concern, in terms of a person's behavioral patterns, statements that might be made and other things that might be potentially worrisome.

So that we don't have a perpetrator of some horrible tragedy in a school, which seems like it occurs without warning, when, in fact, there may have been erratic behavior, statements or other unusual patterns that might have been detected to prevent the tragedy in the first place.

What should parents do?

We need much more engagement of parents and parent-teacher organizations. They can help reinforce the public demand that the schools take these very basic steps to improve security and safety in the schools. Just like parents need to be advocating for the quality of the classroom experience, they also have a right and an obligation to make sure that their schools have these other elements in place.

Why are you worried about a terrorist attack on an American school?

A terrorist targeting a school with innocent children would be a scenario that would have very significant ramifications, in not only the community involved, but for the whole country. We saw a couple of years ago in Russia in the town of Beslan an attack by Chechen rebels on a school, the intent of which was to kill children. There was some evidence that was fairly convincing that al-Qaida had been participating in the planning of this, even though it was Chechen rebels who carried it out.

In any case, American children, in my view, are vulnerable to this kind of specific targeting by international terrorist organizations. The evidence for this is a number of statements, including by some senior bin Laden advisors and al-Qaida spokespeople over the years since 9/11, that have talked extensively about the right of jihadists to kill up to 4 million Americans, and explicitly 2 million of them being children, as part of the retribution for alleged crimes and policies committed by the United States against Muslim communities worldwide.

So, a rationale has already been established, and No. 2 is that the sanctity of children is rarely a factor in the targeting plans of terror organizations. In fact, one could say that if the goal is to achieve a level of terror and demoralization of society, the prospect of targeting children becomes even more possible.

Do these school shootings suggest how vulnerable the schools are to a bigger attack?

These attacks have served as a very painful reminder of just how vulnerable schools are, and how soft a target they can be for individuals who are severely mentally ill or for terror organizations.

Are there any other steps that schools should take besides the ones you outlined before that would help protect more against the terrorist threat?

The basic steps I just outlined would be important for any kind of major disaster in schools and to help prevent or mitigate an attack that is targeting a school. But for terrorism, we want to prevent terrorism in the first place. The prevention of a large-scale, well-planned terrorist attack would hopefully involve border security, good intelligence and counterterrorism efforts to infiltrate groups that are planning such acts, and making sure we've done everything we can to interrupt the planning and implementation capacity of terror organizations. So, it's more of a macro view of where we are with terrorism prevention in general.

But no matter what we do, we're never going to be 100 percent perfect either in screening out individual psychopaths that come into a school, or attempting to interdict terrorism when it's being planned. It's never going to be perfect for any of this, so that's why the plans for how to respond during such emergencies are a critical part of the overall strategy.

Why is school violence so profoundly disturbing?

It's fundamentally counterintuitive to think about the safety of children in schools with respect to extreme violence, because schools have traditionally been havens for many children. In fact, they continue to be so, no matter what environments children may be coming from. There is a sense that in the school building kids are safe and protected from outside negative forces, and they can concentrate on learning and developing social skills. So, the very notion that children can go to school and potentially be victims of extreme violence is antithetical to our basic understanding of what the schools do. That's one of the reasons that this has been so difficult for all of us to absorb and the reason that Columbine and Beslan have had such a horrific impact on our communities here and abroad.

What is the federal government doing to help protect schools?

The unfortunate irony during all this is that federal funds to help schools deal with these basic strategies to make schools safer have been very limited, and, as of this moment, are declining. Funding to reduce violence and substance abuse in schools has fallen from $439 million in 2001 to $346 million in 2006, with just $310 million recommended for 2007. There are grants that are provided by the Department of Education and the Department of Homeland Security to help school districts develop emergency plans, to practice them and to hire security personnel. These are all decreasing now. So, unless there are efforts to really turn this around, we'll actually have fewer resources to put to this challenge than we've had in years past.

I think that these are the kind of things that will be addressed by a conference the president is holding next week. The hope is that we'll get more than just rhetoric, and real dollars will be put on the table to help local school districts do whatever is necessary to protect our children.