What's shocking about John Cameron Mitchell's new film is not the real sex -- gay and straight; solo, duo and beyond -- but its Midwestern friendliness. 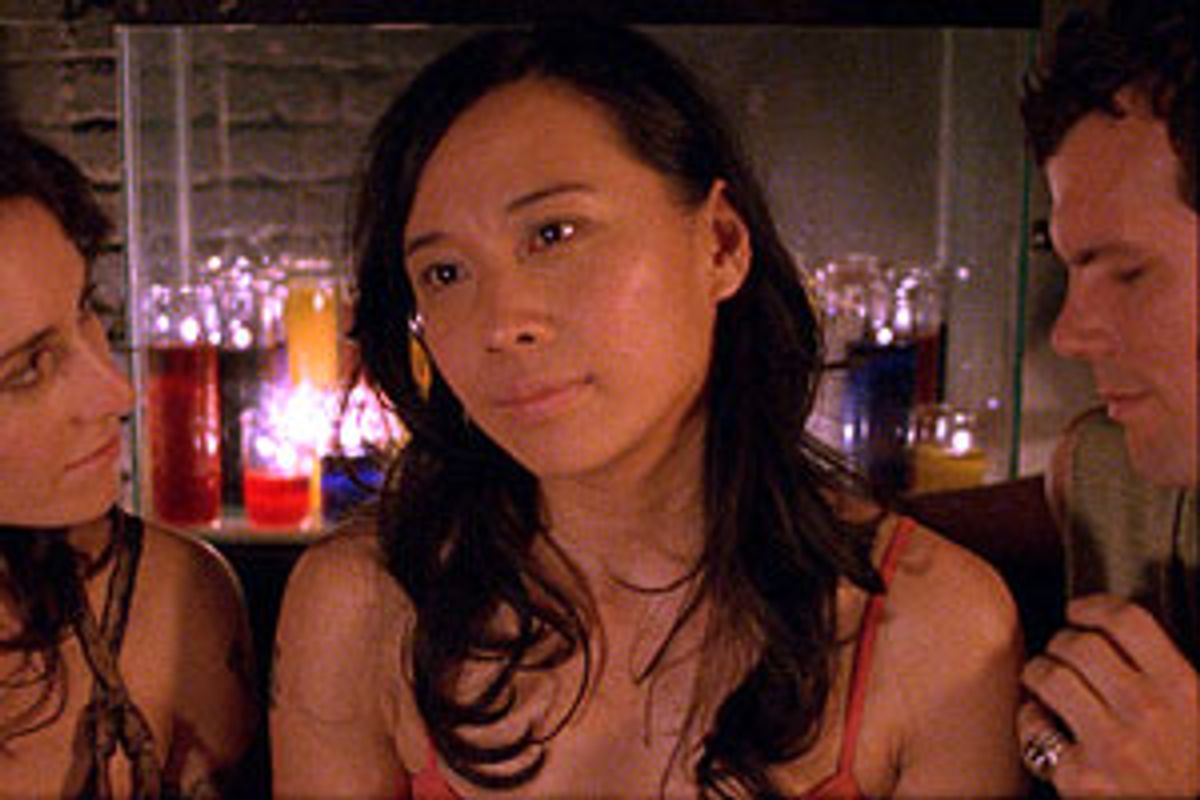 At a screening a few weeks back I overheard a fellow critic describing to another colleague, in derisive detail, one of the numerous (unsimulated) sex scenes in John Cameron Mitchell's "Shortbus," which I hadn't yet seen. The sequence in question involved a somewhat awkward threesome and the humming of "The Star Spangled Banner" right into that spot where the sun don't shine, but never mind that for now. This critic, who writes for a mainstream national publication, had decided not to cover the picture at all, reasoning that it was a bad movie that wouldn't be opening in most towns anyway. Why bother?

Decreeing "Shortbus" unsuitable for the masses seemed a little weird, considering that so many critics had already come back from Cannes talking about how notably unsexy, if charming, the picture was. (My colleague Andrew O'Hehir, writing from the festival, summed it up perfectly as "a sad, sweet openhearted work.")

But after I saw "Shortbus," the notion that the good folk of America had to be protected from it seemed even weirder. "Shortbus" does feature unsimulated sex, both gay and straight (solo, duo, trio and beyond). Yet the sex is the most unremarkable thing about it. What surprised me most about this gentle-spirited sprawl of a movie, set in post-9/11 New York City, is what I can only call the friendly, Midwestern quality of the filmmaking. It's as if Mitchell -- the thoughtful, mischievous faun behind "Hedwig and the Angry Inch," one of the only truly swinging rock musicals ever made -- were calling out to one and all, "Come on over, kids -- we're having a sex party!" This may be a movie made by a New Yorker (albeit a Texas-born one), yet it's anything but insular. Gregarious, neurotic, maybe a little guilty of oversharing: "Shortbus" is American right to its nonexistent short shorts.

Mitchell is credited as the director and writer of "Shortbus," but he's really more of a conductor, a maestro in charge of overseeing the picture's multiple stories, which were conceived and developed by the performers. (Listen to Mitchell discuss the film here.) Mitchell and the actors, many of whom are his friends, rehearsed on-and-off for two and a half years, which helps explain the movie's relaxed, improvisational feel -- and also why it sometimes feels like a bit of a mess.

But sex isn't so neat, either. And considering the pitfalls that lie in wait when you attempt a free-form process like this, "Shortbus" hangs together surprisingly well. Mitchell opens the story with a naked guy in a bathtub -- we later learn that his name is Jamie (the actor who plays him is Paul Dawson) -- who's part of one of the most adorable couples in New York, the kind of couple that most people, coupled or not, straight or gay, envy. These two are known as Jamie and Jamie (the other Jamie is played by PJ DeBoy), and they are truly adorable, but they're not quite happy: Dawson's Jamie has suggested, for reasons that somewhat puzzle DeBoy's Jamie, that they open up their relationship. So they seek the guidance of couples counselor Sofia (Sook-Yin Lee), who has her own problems with her husband, the goateed, underemployed Rob (Raphael Barker): She has never had an orgasm with him, or with anyone. As she blurts out -- inappropriately, but this is a movie about dissolving boundaries -- in the middle of her tense first session with the Jamies, she's pre-orgasmic. (One of the Jamies, trying to wrap his brain around this wholly foreign concept, innocently asks her, "Does that mean you're about to have one?")

The Jamies find themselves in the position of wanting to help Sofia, a crisp, efficient, overachieving Asian-Canadian who really does need to learn to let go. So they invite her to Shortbus, an underground salon hosted by swanning bon vivant Justin Bond (played by the real-life Justin Bond, who's also part of the cabaret duo Kiki and Herb), a combination performance space and sugar shack, where people get together to talk, hang out, eat hash-enhanced snacks, and, if they're moved to, have sex -- possibly with the partner they brought, or maybe with somebody (or somebodies) new. (The salon's name, as Mitchell explains in the press notes, is a reference to the shorter yellow school bus often ridden by "special needs" kids -- a vehicle for outcasts and misfits.)

At Shortbus, new people drift into the Jamies' orbit, and into Sofia's: The guys meet a gorgeous, self-absorbed yet not completely empty-headed young model and singer-songwriter whose name is pronounced Seth, although he's quick to point out that it's spelled with a "C" (the actor who plays him is Jay Brannan); and Sofia makes the acquaintance of Severin (Lindsay Beamish), a professional dominatrix who's not only having trouble making ends meet, but who feels disconnected from everyone and everything around her -- a scowling, eyebrowless crosspatch in red lipstick, she can barely make friends, let alone forge any deeper emotional bond.

"Shortbus" isn't a movie with a point to make or an ax to grind: It's a warm, amorphous shape stretching out in many directions, touching on the neuroses and anxiety everyone, at one time or another, feels about relationships, and the connection (and the disconnect) between sex and love. Mitchell's New York is a place where young and not-so-young people come to make art, to do cool stuff, to find a mate, for the night or for life.

But even if New Yorkers are sometimes guilty of believing they're the center of the universe, it's useful to remember that New York is really just a patchwork of small towns. "Shortbus" understands the sort of urban loneliness that can strike any of us, whether we live in a coastal village or a borough that's almost the size of a small country: How we can feel completely alone even at a rollicking party, or feel jolts of loneliness even when we're wrapped in the cocoon of a secure relationship. Mitchell and his actors sketch vignettes of loneliness and connection: One minute, we think a character is just a goofy thrill seeker; the next, we catch him crying furtively, and we know something is terribly wrong. Another character has a moment of panic when it dawns on her that the city she so desperately wants to live in is expensive and cruel, and she's not sure she can survive it. She blurts out her fears to a new friend: "I want to have a house, and a cat that I can pet," she explains through her frustrated tears, in a non sequitur that clicks like a perfect algebraic equation. "Do you know what I mean?" she adds, although she doesn't have to.

Sex may be "Shortbus'" raison d'être, and it certainly figures in the movie's funniest scenes. And yet the sex becomes so integral to "Shortbus" that eventually you barely notice or think about it. Mitchell isn't going for the end-of-an-affair melancholy of Michael Winterbottom's "9 Songs," or the cherry-bomb bravado of Catherine Breillat's "Romance." Mitchell is hip to the way sex, supposedly the most natural thing on earth, is often actually quite ridiculous. The movie is so open about sex, and approaches it with such affectionate bewilderment, that it feels like an anomaly in our so-called sex-obsessed culture: I've felt sleazier looking at ads for Captain Morgan's rum. When Mitchell trains his camera on a sea of naked bodies of all colors, shapes and sizes, grinding and undulating on the floor of a very large loft, he sees both the humor and beauty of this writhing tableau. These sequences are aesthetically pleasing to look at (Mitchell isn't going for the tattoo-and-cellulite realism of, say, HBO's "Real Sex"), but they also embody the spirit of a Roz Chast cartoon: Group sex may be a beautiful thing, man, but it's also a jumble of wobbly lines and arms and legs heading the wrong way.

Of course, one man's explicitness is another's indiscretion, and there are places where "Shortbus" may be a little too free with the sharing. A friend of mine, referring to one character's saga of sexual angst, called it "TMI" -- more than he wanted or needed to know -- and he has a point.

But I think Mitchell would rather blurt too much than too little. He doesn't want to make a baffling picture that people won't understand; he's reaching out to everyone here, and in a world more perfect than the one we live in, "Shortbus" would be a bigger hit than the dismal indie-juggernaut "Little Miss Sunshine."

There's a sense in America today that our sexual freedoms have been restricted, and in some ways, maybe they have been. But even if this country is still idiotically hidebound over the no-brainer issue of gay marriage, we're still better off than we were 50 years ago, when anyone who didn't fit the hetero mold had to live in secret. "Shortbus" is a movie about the joy, frustration and sadness that are inherent in freedom -- sexual freedom, or any other kind. Let us sound the ass kazoo of freedom! is Mitchell's rallying cry. He's got a bell, and he's gonna ring it: This is his song about love between his brothers and his sisters, all over this land.