When the future of humankind rests in the hands of God-fearing robots, terrorism is our only hope. Hurray for the bleakness and ambiguity of "Battlestar Galactica"! 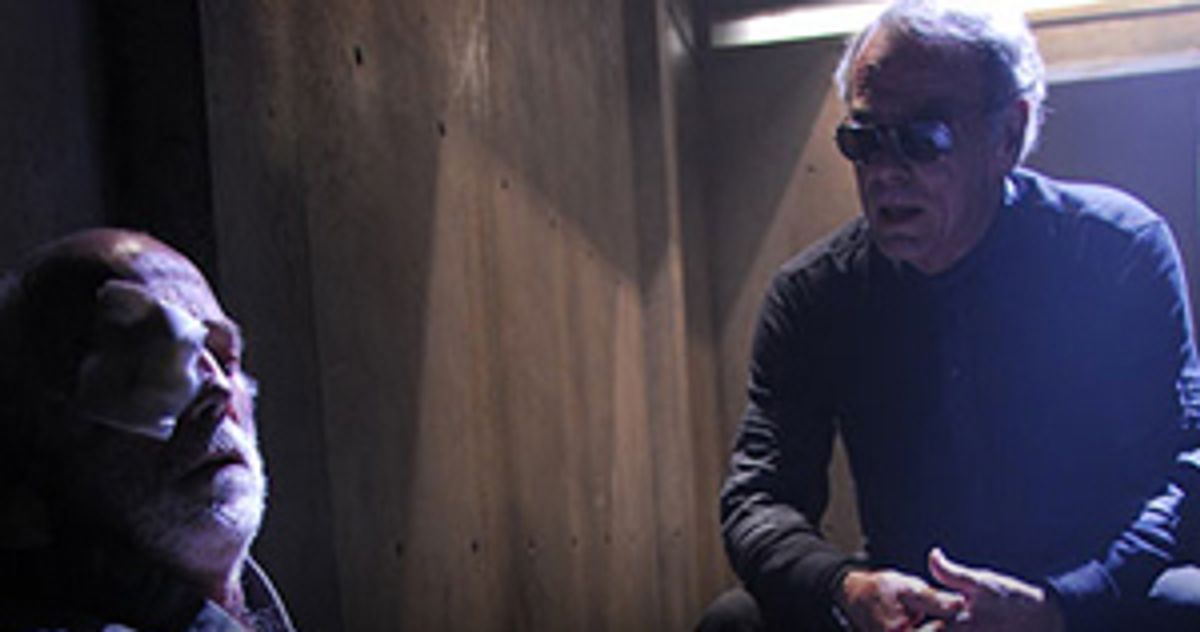 At the end of the second season of "Battlestar Galactica," the colonists, recently settled on New Caprica, are faced with a horrifying vision: Cylon Raiders streaking across the skies above them. Instead of providing a fresh hope for humankind, their new home has become a trap. Looking on helplessly as red-eyed robots march through the streets, Galen "Chief" Tyrol asks his commanding officer, Kara "Starbuck" Thrace, "What do you want to do now, Captain?" With a scowl, she responds, "Same thing we always do. Fight 'em until we can't."

Oh, the hopelessness of it all! But intoxicating darkness has always been "Battlestar Galactica's" calling card, from those opening shots of mushroom clouds and lonely ships, wandering off to find Earth, to the show's haunting, melancholy theme music, to the claustrophobic interiors of Galactica and the stifled rage and sadness of its occupants. When Starbuck (Katee Sackhoff) mutters her plan, through gritted teeth, she's not being tough or courageous or poetic like the heroes of most sci-fi shows. Her remark feels more like an existential lament, the fighter pilot's version of "If that's all there is, then let's keep dancing." Starbuck doesn't share the Cylons' undying faith in one supreme and all-powerful God, nor does she buy into the ancient mythologies that President Laura Roslin (Mary McDonnell) does, putting her hopes in prophecies about leading the colonists to the promised land. Starbuck is a pragmatist with no romantic delusions and few ideals beyond blowing away as many "toasters" (Cylons) and "skin jobs" (Cylons who've evolved to look like humans) as possible. But even without any guiding principles in her arsenal, Starbuck's barely contained rage, as irrepressible as it is relentless, may be the colonists' most important resource.

Because, in keeping with the show's ominous tone, instead of quick resolutions or merciful diversions, the darkness reaches a palpable extreme during the premiere of the third season (9 p.m. Friday, Oct. 6, on the Sci Fi channel), when the colonists are forced to come to terms with the dire nature of their circumstances and adjust to their new lives under Cylon occupation. For some of them, this means keeping a low profile, compromising their morals for the safety of their loved ones, or joining the Cylons in an effort to stay alive. For others, it means "fighting them until we can't" -- waging a violent revolution against the Cylon oppressors, even if it means that innocent humans will get hurt or die along the way.

Heavy stuff, even for a sci-fi excursion through the far reaches of space. But then, what better environment in which to examine the boundaries of personality and group dynamics than a fantastical scenario where the survival of humankind is at stake? The uninitiated may continue to write off "Battlestar Galactica" as the remake of a mediocre show, or as the domain of science fiction fans alone, but those who've watched the show more than once or twice know better.

And so do TV producers, who are turning in increasing numbers to the realm of science fiction as a rich horizon on which to explore the most essential questions about human nature and group dynamics. From "Lost" to the ill-fated "Invasion" to the new "X-Men"-like pilot "Heroes" and the nuclear holocaust pilot "Jericho," the networks have integrated sci-fi into the mainstream with shows that not only dig deeper into questions of community and the ways that communities react to outside threats, but also explore the responses of individuals to intense circumstances. Like "Lost," "Battlestar" concerns itself primarily with human survival and views the characters and stories through a historical lens, layering on sociopolitical, cultural, economic and religious meaning to illustrate the divergent natures of human beings as well as their wildly contrasting philosophies and approaches to persevering in the face of major risks.

Best of all, "Battlestar" examines these themes without compromising the depth and integrity of each character. Each individual's reaction to the dire circumstances on New Caprica, while at times startling, follows directly from what we know of them so far, but also tests the limits of their fundamental beliefs and strengths as human beings: Chief Tyrol (Aaron Douglas) and his wife Cally (Nicki Clyne) are looking after their firstborn son, yet Chief remains as fiercely committed to the colonial cause as ever, leading the insurgency against the Cylon forces. Col. Saul Tigh's wife, Ellen (Kate Vernon), in her usual unnerving mix of perversity and loyalty, seduces Brother Cavil (Dean Stockwell), a Cylon, in order to win Tigh's (Michael Hogan) release from captivity, where he's been tortured and has lost an eye. Starbuck has been captured by Leoben Conoy (Callum Keith Rennie), a Cylon she knows from a previous interrogation on Galactica, and is being tirelessly manipulated into forming an attachment to him. She's resisting him, of course, to a gory extent, but no woman, not even one most men refer to as "Sir," is an island.

Meanwhile, Adm. William Adama (Edward James Olmos) hasn't given up on efforts to contact the colonists on New Caprica, but his son Lee's belief in the cause -- and in himself -- have diminished in direct proportion to the growth of his father's conviction. Indeed, we meet up with an almost unfamiliar Lee (Jamie Bamber): squishy, fat-faced, and unsure of himself in the face of his new role as commander. He's married to Dee (Kandyse McClure), but she already seems disillusioned with him in his new, pudgy state.

Unlike the original "Battlestar" series, which aired in 1978, this is not a show aimed at providing fun for the whole family, least of all this season, which features an examination of brutal wartime tactics that's about as far removed from the Ewok Village giddiness of children and robotic dogs as ever. Just as the show has used visual references to President Johnson's Air Force One swearing-in and to billboards of lost family members during 9/11, so too are we treated this season to images straight from Iraq: hooded prisoners being led into dismal cells like detainees at Abu Ghraib; men with black masks recruited by the Cylons to police other humans. The Cylons also have their own versions of communist propaganda posters ("Become part of the solution" they read), used to recruit these human police, and they instill Holocaust-era fear in the populace, hauling crowds of people away to face robotic firing squads.

Overpowered and oppressed, how will the colonists possibly survive in the face of such brutal tactics? By committing terrorist acts, of course. The insurgents, from Starbuck's husband Samuel Anders to Col. Tigh to Chief Tyrol, are in agreement: Only by sending men on suicide missions and planting bombs will the colonists stand a chance against their Cylon persecutors. That's right -- Cylons put their faith in one, all-powerful God and hope to "save" humankind by spreading God's word through their ranks, while the humans place their faith not in God, but in terrorism. You really have to hand it to the writers of "Battlestar" for turning the current political climate on its head.

Of course, the real drama here still rests in the human relationships: flawed characters, struggling to make it through chilling times without sacrificing too much of themselves in the process. Gaius Baltar (James Callis), who won the presidency with slick promises of a glorious future on New Caprica, fails to make it through with his dignity or honor intact, which is vaguely satisfying to see after all of his misdeeds. His endless seduction by Number Six (Tricia Helfer) seems to be drawing to a close as well -- a relief, after more than a season of the same breathy, imagined encounters with the Amazonian blonde that have been the only repetitive, predictable element in the series. Col. Tigh is also forced to make some huge sacrifices for the sake of his ideals, a nice twist for such a tough, uncompromising hawk of a character. As for the rest of the group, the future looks as uncertain as ever. Even after some major battles are won, the ambivalence and inner conflict we witness in these imperfect humans make us wonder if they'll ever find happiness, even if they do finally find the planet Earth.

But then, isn't that we love about "Battlestar Galactica" in the first place? Like those lonely spaceships in the opening credits, floating off into the abyss of space, the souls onboard remain indefinitely lost and uncertain of their true calling. There are temporary victories, epiphanies, discoveries and moments of grace, but the colonists, for the most part, muddle through the darkness just like the rest of us, unsure of where it all leads, yet determined to find out at any cost.