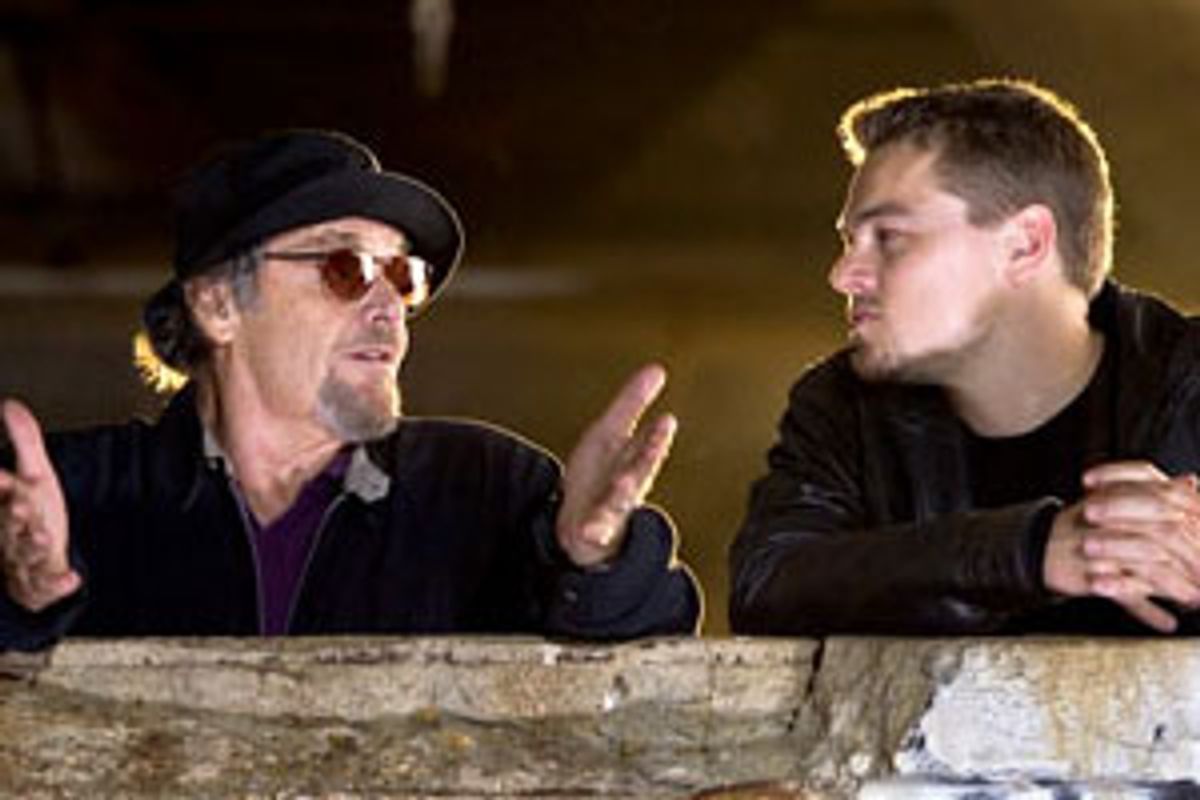 In the same way that the Beatles' cover of Buck Owens' "Act Naturally" or the Stones' version of "Route 66" cut to the soul of American music without being American, Hong Kong cop and gangster movies have often seemed more quintessentially American than American ones are. Sometimes when deeply familiar conventions are borrowed and remade, as directors like John Woo, Johnny To, and the team of Alan Mak and Andrew Lau have done, they're intensified -- they come back at us stronger than ever. Crooked cops challenging the survival of straight ones; bad guys whose sense of honor parallels the good-guy kind: The themes that we recycle over and over again can feel brand new when we see them through someone else's lens. Genre filmmaking will never die, but that kind of reinvention is its lifeblood.

So there really was no need for Martin Scorsese to make "The Departed" -- to remake, to Americanize, Mak and Lau's 2002 Hong Kong gangster drama "Infernal Affairs," a tersely structured and beautifully acted picture that few Americans got to see. "Infernal Affairs" was a smash in Hong Kong, spawning two sequels. Here, it was just another Asian-made picture picked up by Miramax and poorly distributed: People had heard about it, but seeing it in theaters was another story. Whatever life it had in the States, it found on DVD.

But what good is moviegoing if we can't find pleasure in things we didn't know we wanted? Scorsese didn't need to remake "Infernal Affairs," but what he has done with it is a compliment rather than an affront to the original: "The Departed" reimagines its source material rather than just leeching off it, preserving the bone structure of the first movie while finding new curves in it. The story has been clarified; the ellipses of the original have been filled in with just the right amount of exploratory shading. This is a picture of grand gestures and subtle intricacies, a movie that, even at more than two hours long, feels miraculously lean. It's a smart shot of lucid storytelling.

Scorsese and screenwriter William Monahan have shifted the action to Boston (the picture was shot there and in New York City), specifically South Boston, a place where clannish prejudices are both a stereotype and a reality. Matt Damon is Colin Sullivan, a young cop who came up from the streets of Southie in the pocket of Mob king Frank Costello (Jack Nicholson). He's now part of an elite state police special investigation unit assigned to bring the elusive Costello down -- in other words, Costello has a very convenient mole in the police department. But another young rookie from Southie, Billy Costigan (Leonardo DiCaprio), a straight arrow from a family with a long criminal history, has been sent undercover to infiltrate Costello's organization from within: Only two high-level detectives on the force, Queenan (Martin Sheen) and Dignam (Mark Wahlberg, in a fine, flinty performance), know his real identity. He and Sullivan don't know each other, but their connection is practically forged in blood.

Maybe it would be hard to mess up material with this much potential: There's a lot you can do with the idea of two young cops straining beneath the weight of the double lives they lead, and Scorsese and Monahan -- and, for the most part, their actors -- seem to have had no trouble locating the heart of the material. People will want to compare "The Departed" with "Goodfellas," but the movies are worlds apart: "Goodfellas," for all its violence, carries nearly no emotional weight -- it's a tooting fairground organ with no soul. "The Departed" has weight and bite, although it's also a thrilling entertainment. The violence is sharp and bright without being assaultive, but Scorsese also makes sure we're aware of its impact. We may get a jolt when a thug gets popped in the jaw and a few of his teeth clatter to the floor, or feel a twinge of nausea when blood spurtles from a wounded character's mouth like water from a playground drinking bubbler. But the violence here is doled out in details, not ladled with a spatula. It works in concert with everything around it.

The characters are fully in tune with their setting, maybe partly because Monahan himself was born in Boston and several of the actors are Boston natives. (Even so, viewers who can distinguish the subtleties of New England accents may notice that Wahlberg's is distinctly and authentically Dorchester, while Damon's Southie-speak is slightly exaggerated -- it comes from the Brattle Street end of the Red Line.) The picture gets the way class and race prejudices still divide the city, despite its liberal reputation. When DiCaprio's Costigan and one of his police academy buddies, played by Anthony Anderson, trade friendly epithets, Costigan gets the last word: "You're a black guy in Boston -- you don't need any help from me to be fucked."

Scorsese has put together a fantastic ensemble of actors: Some of the movie's best performances are the ones tucked into the corners, like Alec Baldwin's beefy, arrogant state police honcho. (His caustic exchanges with Wahlberg's Dignam are some of the movie's most sharp-witted moments.) Sheen, with his carefully combed hair and Easter-egg paunch, brings the right amount of touching realism to Queenan's career cop -- he may lumber though his workday, but he does so with touching dedication.

Monahan has made a nifty addition to the Nicholson character, one that plugs the movie right into Boston's most recent gangland saga. And Nicholson's performance, a revolving palette of winks and wheezy wisecracks, is entertaining. It's also a gimmick: He needs to stop letting his eyebrows do most of the work for him. Damon brings dashes of style to his role, particularly in some early scenes where he flirts with a crime psychiatrist played by Vera Farmiga -- forgetting that he's trying to impress her, he begins a sentence with the classic Bostonian disclaimer "No suh!" But his performance doesn't have the grave presence that DiCaprio's does. This is a good role for DiCaprio: Since he's playing a wily punk on the right side of the law, it's fitting that his boyishness hasn't yet quite jelled into manhood. And as he's forced to wade deeper and deeper into his secret life, we can see how much it takes out of him: His heart is so heavy it seems to weigh down even his narrow, wiry body.

DiCaprio's performance is terrific -- but I can't say it's better than Tony Leung's, in "Infernal Affairs." Leung vested his version of the character with even deeper furrows of sadness, particularly in a scene where he meets the young daughter he didn't know he had. But I think it's possible to feel warmer toward "Infernal Affairs" than toward "The Departed," while recognizing the ways in which Scorsese has built on, and enhanced, the original's strengths. These are two modern crime dramas that serve their audience first and foremost: Unlike the characters that haunt them, they're both working on the same side.