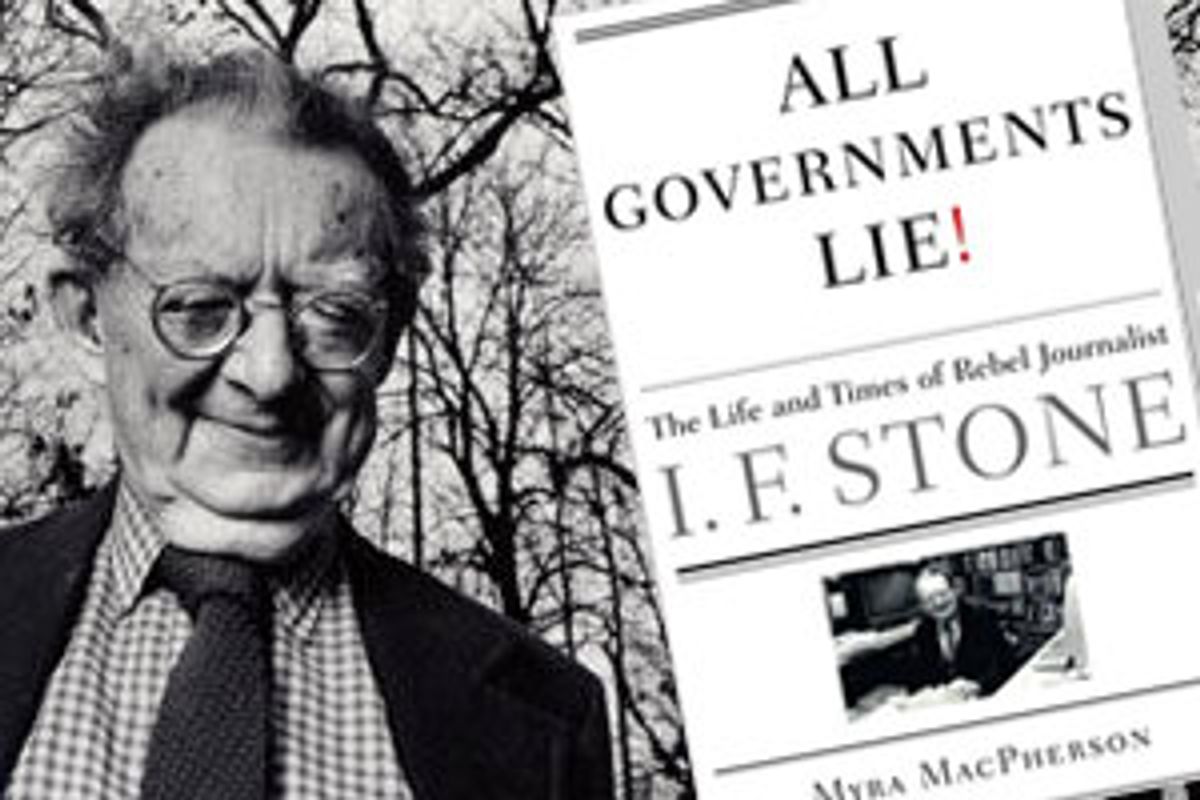 I.F. Stone, the great radical journalist who died in 1989, no doubt would have objected just as vociferously to comparisons between his small but influential weekly newsletter and today's buzzing blogs as does Myra MacPherson, author of the wonderful new biography "All Governments Lie: The Life and Times of Rebel Journalist I.F. Stone." Yet he surely would have sympathized with the wired idealists whose self-appointed mission is to correct the mainstream media, chastise the right-wing propagandists and excavate the critical information that officialdom prefers to keep buried.

With his profound awareness of history, Stone could not have helped seeing the parallels between his times and ours, when the same kind of government deceptions and press complicity that he spent his career exposing have again resulted in a horrific and unnecessary war. That is only one of the reasons why his story is much more than an engaging episode from the past.

It is the story of a principled dissident long treated by his establishment colleagues as a pariah, who reveled in his outsider status during lonely years in Washington -- and who lived to see himself vindicated on searing issues such as the Holocaust and fascism, the McCarthy purges, the nuclear arms race, the civil rights movement, the war in Vietnam, and the endless struggle between Israelis and Palestinians. It is also the story of a democratic leftist who eventually turned away from early hopes for socialism in the Soviet Union and China, as so many intellectuals did during the 20th century, without ever abandoning his cheerful good humor about humanity. And it is the story of a man who pursued his own unique version of the American dream by starting a small business, raising his beloved family and making lots of money, with a freedom and independence envied by his peers.

Stone was a born newsman who began to string for local newspapers as a teenager in New Jersey and dropped out of the University of Pennsylvania to work on the rewrite desk at the Philadelphia Inquirer. He went on to write editorials for the New York Post, become Washington editor for the Nation and reported for three short-lived liberal daily papers (P.M., the New York Star and the New York Daily Compass) before he launched I.F. Stone's Weekly in 1953. Produced at his home in Washington with the assistance of his wife, Esther, the weekly's circulation reached 70,000 before he published the last issue in 1971. (Charging $5 for an annual subscription, he did very well by doing good.) He went on to write essays for the New York Review of Books, the Village Voice and (once more) the Nation.

MacPherson, a former staff writer for the Washington Post and a past Pulitzer nominee, devoted more than a decade to creating this biography with exceptional rigor, devotion and fairness. Much as Stone might have done, she sets his tale in richly detailed context, with a proper emphasis on his maverick stance against the establishment press. One of her most instructive devices is to continually contrast Stone's reporting and analysis with those of his contemporary Walter Lippmann, the venerated Washington columnist and ultimate insider. Suffice to say that Lippmann doesn't come off too well, as journalist or thinker.

As a professional reporter all his life, Stone didn't hang around in his pajamas, ventilating opinions and feuding with rivals. Although plenty opinionated, Stone spent his days out and about in Washington -- collecting documents, perusing transcripts, clipping newspapers, grilling sources -- to excavate the hidden facts that informed his powerful, impassioned and deeply literate writing. But in that era, of course, there was no instant and easy computerized access to the archives of documents and publications that old-fashioned reporters had to spend hours and days tracking down. He broke dozens of stories on war profiteering, domestic spying by the FBI, American corporate complicity with the Nazi regime and the fabricated account of the "Tonkin Gulf incident" that led to American intervention in Vietnam.

It was Stone's early and outspoken opposition to the Vietnam War that brought him thousands of new readers and fresh notoriety in the '60s, only a few years before his weekly ceased publication. That brief period of celebrity earned him new enemies as well, who have not stopped slandering him almost two decades after his death. The enmity of such discredited figures as Reed Irvine, Ann Coulter, Robert Novak and Martin Peretz is an honor, of course, but their calumnies of Stone -- as a "Stalinist" and possible Soviet agent -- nevertheless require refutation.

The supposed evidence that Stone's radicalism led him to work for the KGB has been eviscerated many times, nowhere more thoroughly and more capably than in "All Governments Lie." Using FBI files that she retrieved through the Freedom of Information Act, MacPherson reveals the secret feud between Stone and late FBI Director J. Edgar Hoover that began in the '30s and resulted in continuous, intrusive surveillance of the journalist that went on for almost 40 years. The FBI never found a shred of evidence against him. But decades later, a former KGB agent named Oleg Kalugin, who had posed as a Soviet press attaché in the '60s, suggested that Stone had willingly helped him gather information in Washington. MacPherson shows conclusively how Kalugin, never a reliable source, has repeatedly contradicted himself, and how the other "evidence" against Stone evaporates upon examination.

A tendentious and dishonest essay by Paul Berman in the New York Times Book Review last week revived the Kalugin claim, mostly by leaving out significant facts. Eric Alterman ably dismantled Berman's review in the American Prospect. (Berman should spend his time trying to figure out why he became the useful idiot of George W. Bush, rather than obsessively and inaccurately rehearsing the moldy debates of the Cold War.)

Here I should finally acknowledge that Izzy Stone was not only a personal hero and mentor to me but someone I knew from a very early age as a friend of my family's. (His daughter is married to one of my cousins and is also a lifelong friend.) I've gone out of my way to promote "All Governments Lie," and I would also recommend "The Best of I.F. Stone," an excellent new collection of his writing.

But my admiration for him didn't blind me to his mistakes and shortcomings -- especially his reluctance to condemn Soviet repression and brutality until 1956, when he visited Russia for the first time and saw for himself the regime that he would condemn repeatedly for the next three decades as a dictatorial police state. He was not perfect, as he was quick to admit despite his egotism, and he made many other mistakes of less consequence.

I would argue, however, that he was more honest about his errors than his critics are about theirs. More important, he confronted the untruths of his own government in times when almost nobody else dared to, and not only with eloquent rhetoric or sharp humor but with salient facts and hard reporting. Bloggers and others in the strange new world of Internet journalism could do far worse than to learn from his legacy.