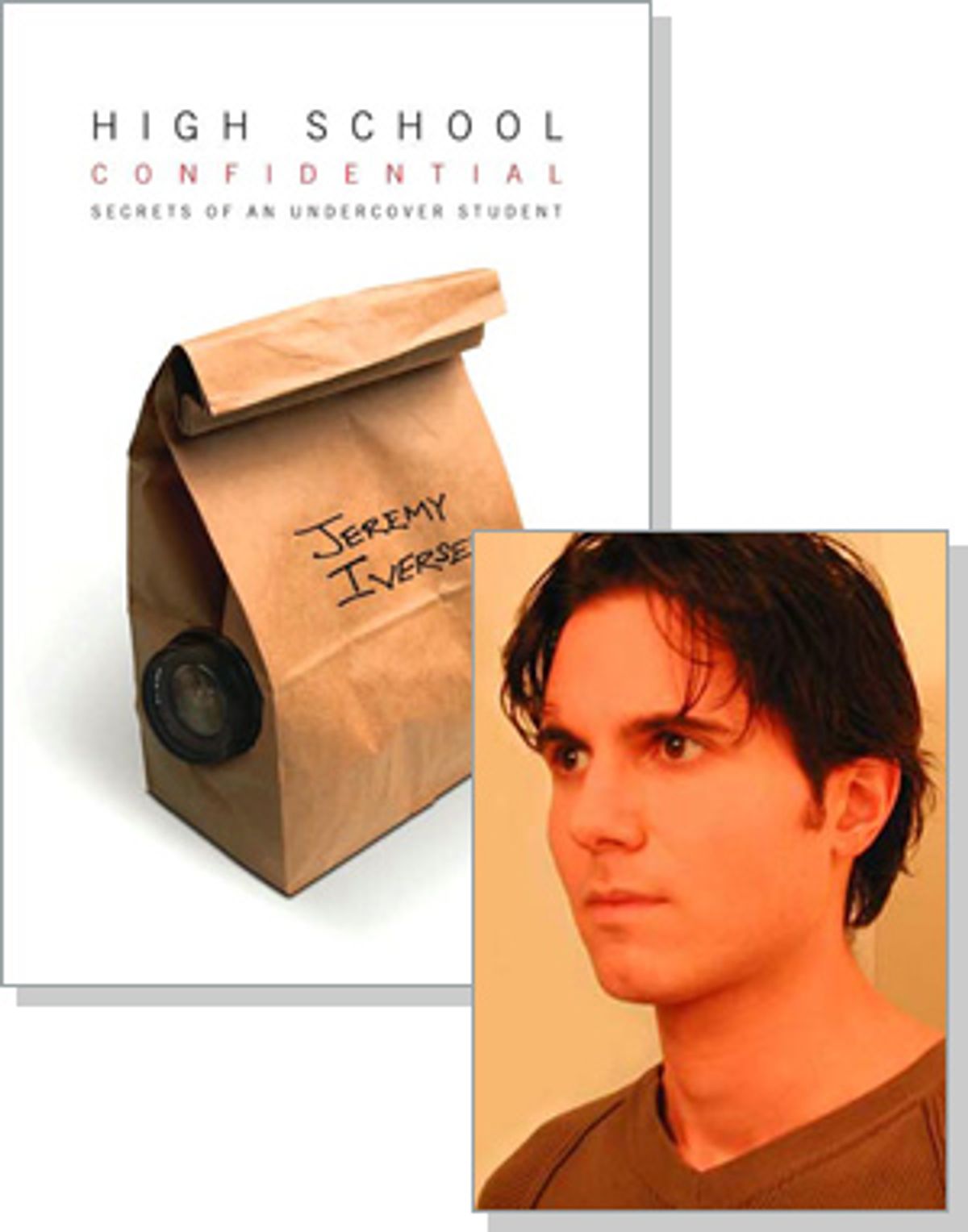 When Scott McCloud's book "Understanding Comics" appeared in 1993, it seemed like a gift from the blue -- a brilliantly thought-out analysis of how the comic-book medium works, presented in comics form itself, that doubled as an astute and engaging explanation of the way people relate to images in general. (Anyone who gives PowerPoint presentations, for instance, really ought to read it.) It became the standard reference work for comics theory, supplanting McCloud hero Will Eisner's "Comics and Sequential Art." And it inspired both cartoonists and readers, by making explicit the formal mechanisms that everyone had mostly been left to intuit before then.

What it wasn't, really, was a how-to book -- a guide for aspiring cartoonists. That's where McCloud's new book, "Making Comics," comes in. It's not quite a how-to-draw book, and it's definitely not a how-to-break-into-the-business book. (The polite answer a brief chapter on "The Comics Professional" offers to the latter question is, effectively, "get really, really good.") Instead, it's a guide to the way cartoonists apply their skills to turn a story into a reproducible page, a sort of "Understanding How Comics Are Made." And it's the productive argument starter McCloud's earlier attempt at a follow-up, 2000's "Reinventing Comics," didn't quite manage to be. (In one panel of the new volume, McCloud draws himself at a party, where someone's telling him, "Hey, loved the first book! I'm still, uh ... working on that second one.")

As before, McCloud casts a little caricature of himself as the lead character -- a professor with a grid-paper tweed jacket, a lightning-bolt T-shirt (after the star of his marvelous and inexplicably out-of-print '80s series "Zot!") and round glasses covering his eyes. The cartoon has grayed a little at the temples and put on some weight since "Reinventing Comics," but McCloud has come to resemble his stand-in, too: He has been giving talks on comics for years now, and he has become a master lecturer in person as well as on the page. He has recently embarked on a yearlong, 50-state promotional tour for "Making Comics" with his family, and has set up a LiveJournal group for the four of them to chronicle it day by day.

"Making Comics" isn't just a treatise, it's a performance. In one sequence, he's describing the storytelling process and comes up with a little plot about a man picking up a key and finding a door: "So, he unlocks the door and then a ... I dunno ... a HUNGRY LION jumps out!" He draws himself saying this in the hands-up pose that he later observes connotes friendliness and receptivity. And, he later explains, "I dunno" is disingenuous (in the middle of a page he labored over for days, he's feigning a split-second improvisation) -- but it's also hilarious.

Naturally, McCloud makes sure his points are well illustrated -- either by his own drawings or by images from his favorite cartoonists' work. His "favorite cartoonists" list is a long one: He has seemingly read and memorized every comic ever published in print or on the Web, and he's legendary for encouraging talented young unknowns. A couple of Web cartoonists have already mentioned to me that having their work appear in a grid of tiny head shots on one page of "Making Comics" validates their entire careers.

McCloud's virtue as a lecturer is that he's both an incredibly clear explainer and a natural entertainer: The point of his work is how images communicate information, and he has an iron grip on how to get complicated ideas across with a few simple lines and a mountain of charm. What makes him a provocateur, though, is that he also likes to set up very simple, categorical schemes in which everything in a given category can fit into one of a small number of subcategories. The fun of "Making Comics" starts with its table of contents, which features a tiny visual icon to clarify every section and subtopic's title. The debatable taxonomies start a few pages later.

"Writing With Pictures," the book's first chapter, breaks down the content of every comics panel into five specific creative choices: moment (how the image is limited in time), frame (how the image is limited in space, including the reader's perspective), image (the visual content itself), word (what language, if any, is incorporated into the panel) and flow (how the panel relates to the panels before and after it in the reader's attention). All of those are reasonably narrow except for "image," which is enormous. McCloud defines "choice of image" as "rendering the characters, objects and environments in those frames clearly," but -- as much of a virtue as clarity is both in McCloud's philosophy and beyond it -- image choice in comics isn't just a matter of clear rendering, or it'd be the poor relation of photography. It involves style (itself a gigantic topic), line, distortion and the dynamic exaggeration techniques McCloud refers to as "intensity" a few pages later. For that matter, it's nearly impossible, in practice, to tease out "choice of image" from the choices of moment, frame and flow.

The next chapter, "Stories for Humans," is mostly about how to use drawn characters as actors -- how to make them communicate emotional content by their appearance and body language. And it includes an even more alarming taxonomy: six basic human facial expressions of emotion from which all others are derived. Those would be anger, disgust, fear, joy, sadness and surprise, and as much as I'd like to come up with an effective counterargument to that particular breakdown (borrowed from psychologist Paul Ekman) -- as McCloud notes himself, it's kind of creepy -- the dozens of examples he draws are mighty convincing. ("Disgust + surprise = 'you ate it??'")

Most of the rest of "Making Comics" doesn't throw theories around quite as dramatically. "The Power of Words" largely has to do with integrating text into comics panels, rather than writing as such. (McCloud objects strongly and amusingly to language that's made redundant by pictures. The image in his example: a man jabbing his finger. Caption: "He jabbed his finger!" Word balloon: "Ha! I jab my finger at you!") "World Building" isn't about devising the ideas behind a comic's setting, it's about drawing convincing environments; for McCloud, that mostly means visual details, specificity and accurate perspective, although he also shows sample panels from cartoonists like John Porcellino who construct remarkable settings "without ever going near a vanishing point."

The chapter on "Tools, Techniques and Technology" is a bit of a head-scratcher: If you can already draw proficiently enough for the other chapters to be useful, you probably don't need to be told the difference between inking with a pen and with a brush. But it's also the one place in "Making Comics" where McCloud's famous technophilia comes through. "There's nothing quite like the right pen or brush gliding across a newly cut piece of Bristol board," he says. (Silent panel, in which he contemplates his brush. Another silent panel.) "As for me, I haven't used one in over ten years." He describes the precision and flexibility that drawing on the computer has given his art, and he's not wrong -- but what he has lost is the old wabi-sabi inconsistency and humanity of his line, which was a big part of why "Zot!" was such a pleasure to look at.

The final major chapter, "Your Place in Comics," begins with an essay on style that's not especially well fleshed out. ("You don't always 'choose' your style. Sometimes it chooses you.") Fortunately, it's followed by "Understanding Manga," a thoroughly enlightening nine-page explanation of the difference between manga and Western comics. Then there's a little section on "genre" -- basically an attempt to address the elephant in the room, superhero comics, by mentioning them in passing. Its subtext is "please don't lock yourself into thinking that superhero comics are the only game in town, because they're an all-but-exhausted sub-sub-category." Of course, McCloud would never come out and say that -- he's too good-natured to actually dismiss anything -- but the implication is clear.

He has one last major taxonomy left to spring on us, though, and it's one he's dubious enough about that he "sat on this idea for over ten years without publishing it, concerned that it might do more harm than good." The idea is that there are four "tribes" of cartoonists -- "classicists" who put beauty and craft first, "animists" who try to make their characters and plot come alive, "formalists" (the camp McCloud claims for himself) who are interested in playing with the boundaries of comics themselves, and "iconoclasts" whose ideal is self-expression. (When McCloud first proposed this theory, as I recall, he suggested that Jim Woodring didn't fit any of them, but he now seems to have pegged Woodring as a sort of animist/formalist hybrid.) The schema doesn't seem at all harmful, actually, as long as everyone understands that it's a toy rather than a tool.

Again, "Making Comics" isn't a book for novices. McCloud assumes that his audience has stories to tell and some idea of how to tell them, and that they can draw pictures well enough to fine-tune their visual approach. That makes some of his suggestions rather advanced for aspiring cartoonists, who may be able to imagine a story in detail but not draw it. But just as "Understanding Comics" wasn't useful only for people who were interested in comics, "Making Comics" isn't only useful for cartoonists: At its best, it's another intriguing set of ways for comics readers to think about what they're looking at, and the section on facial expressions is fascinating for anyone who looks at other people, period.

McCloud has said that after the "Making Comics" tour is over, he's planning to take what he has learned and work on an actual graphic novel of his own -- his first since 1998's "noble failure" (in his words), "The New Adventures of Abraham Lincoln." He may be expecting it to be a formalist work, and he has a better grasp on the capacities of comics than almost anyone else, but I'd argue that he's actually an animist. His formal mastery is entirely in the service of connection and communication; what he emphasizes most about comics is how they can form a deep, direct bond between artist and audience. And if the measure of an animist cartoonist is characters, McCloud has created one of the best-loved ones of the past 15 years: a cheerful little professor with a lightning-bolt shirt.