The Nobel Prize in literature has come to symbolize greatness in life, as in art -- but G 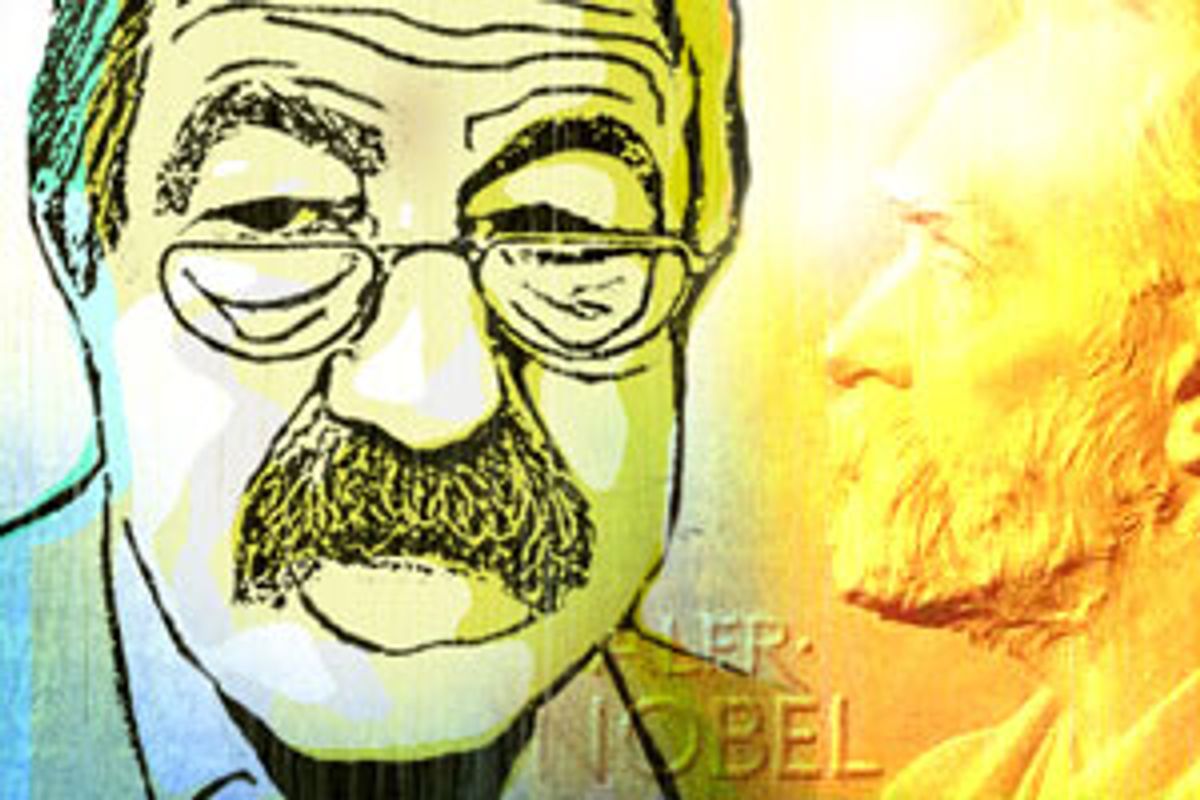 The prize-giving season is here. Over the next two months a veritable trophy cabinet of checks and trinkets, including the Pulitzer, the National Book Award, the Man Booker Prize, the Prix Goncourt (France) and the Cervantes Prize (Spain), will be handed out to those writers lucky enough to have well-connected marketing muscle behind them. But the biggest prize of them all, the most yearned after, comes out of Sweden Thursday, the bounty of Stockholm, the Nobel Prize in literature.

This year's Nobel carries a little more baggage with it than usual, given the revelation by Günter Grass (Germany 1999) in his autobiography, "Peeling the Onion," that he was a member of the Waffen SS, the military wing of the infamous shock troops, at the end of the Second World War. The Christian Democratic government of Angela Merkel called on Grass to return the prize. (The Nobel Committee has stated that the prize cannot be rescinded or returned.) Solidarity founder Lech Walesa demanded that Grass renounce his honorary citizenship of Gdansk (formerly Danzig, Grass' birthplace and the setting for "The Tin Drum"), adding that he didn't "feel good in this kind of company." Playwright Rudolf Hochuth said that Grass "has morally discredited himself." But the harshest attack came from biographer-historian Joachim Fest, who stated that he could not "understand how someone can elevate himself to the position of moral conscience of the nation on Nazi issues and then admit that he was himself deeply involved. I wouldn't even buy a second-hand car from this man now." The recently deceased Fest's remarks were all the more damning with the appearance of his memoir "Not Me: Memoirs of Childhood and Youth," which focuses on his father, a teacher who worked hard and at great risk to himself to ensure that his five children did not become Nazis. It was possible, argued Fest, to remain decent even in dark times.

To be sure, others, such as literary heavyweights Martin Walser and José Saramago (Portugal 1998), and flyweight John Irving, have sprung to Grass' defense. Saramago and Walser, a maverick who has questioned the relevance of Berlin's Holocaust Memorial, pleaded extenuating circumstances, since no one at 17 can possibly tell right from wrong (!), and noted that old men and boys were gang-pressed into service in the final days of the Third Reich. Appearing in the Guardian, Irving's defense went, in effect, "How dare you cheap, sanctimonious hacks question the integrity of my close, personal friend, my pal, my buddy, Günter Grass. For shame!" And for good measure he got in a plug in for his latest novel, which shall go unplugged here.

In characteristic breast-beating fashion, Grass spoke sorrowfully of how he might have been tempted to commit atrocities had he been drafted earlier, or been a few years older. I'm a victim, too, he seemed to imply, even as he reminded one and all that he has never shied away from talking about his happy days in the Hitler Youth, about being a true believer until the Nuremberg trials opened his eyes to the crimes of his heroes. Trouble is, Grass' account of that time has shifted over the years with his changes in fortune; he volunteered, he was drafted, it was 1944, it was 1945; it wasn't my fault, but society at large; it was my fault, I should have known better. Old men forget.

But to many, Grass' comeuppance has inspired no small amount of schadenfreude alongside the usual heavy Teutonic soul-searching. No one likes a moralizer, and Grass is a particularly insufferable one, finger wagging, righteous and big on symbolic gestures. His stigmata are largely self-inflicted. What he doesn't seem to understand is that had he come clean about his past at the start of his literary career, his moral authority might actually have been enhanced. Instead, his reticence speaks volumes for his ambition.

Does any of this matter? Well, yes and no. If you put faith in prizes then the Nobel does matter, not for its literary merit, which seldom counts, but for what it has come to represent. Factors such as which country's turn it is to win, being at the right trouble spot at the right time and, above all, gravitas -- the right tone as it were -- on the burning issues of the day weigh more. Certain writers, like Seamus Heaney (Ireland 1995), Nadine Gordimer (South Africa 1991) and Gao Xingjian (China 2000), are tailor-made for the Nobel. (Much the same can be said for such bruited laureates of the future as Orhan Pamuk, Ismail Kadare, Margaret Atwood, Elias Khoury, David Grossman, Philip Roth, Cees Noteboom and Mario Vargas Llosa. Maybe Hans Magnus Enzensberger or Christa Wolf will win this year, say, to make up for Grass' disgrace?) Now and again, though, the committee members get it right in spite of themselves, as with V.S. Naipaul (U.K. 2001) and Harold Pinter (U.K. 2005); never mind their widely different and highly controversial sociopolitical viewpoints, which enraged their detractors on the left and right respectively, they were chosen for their undeniable literary gifts.

Naturally, any fall from grace is writ large and reflects on the judgment of the committee. This isn't about the sometimes obnoxious or offensive or even indefensible opinions uttered by past laureates -- where do you start? -- but about actual deeds, or sins of omission. And by deeds I mean writers that, in either an official or a semiofficial capacity, have brought their character into disrepute or caused harm to others, however indirectly. Grass is hardly alone in this respect. For instance, the decision taken by Wole Soyinka (Nigeria 1986) to ban Peter Hall's production of George Orwell's "Animal Farm" at the Theatre of Nations Festival in Baltimore in 1986, for fear of offending that great bastion of cultural freedom, the Soviet Union, is a good example of the former. It shows up Soyinka, a victim of censorship (and worse) himself, as a hypocrite, or at the very least a practitioner of double standards, for one couldn't imagine him banning an Athol Fugard play for fear of offending apartheid South Africa. This was months before he picked up the prize! What were they thinking?

Then there's guilt by association. Playwright Luigi Pirandello (Italy 1929) joined the Fascist Party in 1923 and tried to ingratiate himself with Mussolini, envisioning for himself the role of national bard, Virgil to his Augustus. Later, after he came to realize that Il Duce was no Augustus, and tired of the party's heavy-handed interference in his theater company, he referred to the jut-jawed one as "an empty top hat that by itself cannot stand upright." His unfinished last play, "The Mountain Giants," is in part an allegory on the illusion of artistic autonomy.

With poet Jacinto Benevente (Spain 1922) and novelist Camilo José Cela (Spain 1988), the charge of guilt by association is more ambiguous. Both were on the "wrong" side of the Spanish Civil War (Cela actually took up arms), but Cela's case is tempered by the fact that his novels were frequently censored and banned under Franco. He also founded and edited Spain's leading literary magazine, which not only took a strong line against the regime but also published many writers who'd fled into exile. By contrast Benevente, a coddled señorito, was afraid that he'd lose his privileges in a representative democracy.

Knut Hamsun, Mikhail Sholokhov and Pablo Neruda scraped the lowest depths. A lifelong Germanophile whose pathological antipathy to modern life and much of Western civilization informed his oeuvre, Hamsun (Norway 1920) became a collaborator during the Nazi occupation of Norway. His enthusiasm was such that he gave his Nobel Prize medal to that prime specimen of the master race (and failed novelist), Joseph Goebbels; he also met Hitler. Unlike his infamous friend, Nazi politician Vidkun Quisling, Hamsun escaped the firing squad after the Second World War; he was judged insane.

According to scholars, notably Roy Medvedev, huge chunks of Sholokhov's prize-winning "And Quiet Flows the Don" (USSR 1965) were lifted from the works of Fyodor Kryukov, a Cossack and anti-Bolshevik writer who died of typhus in 1920. His victory was the crowning glory of a Communist Party toady whose rise in Soviet literary officialdom, as witnessed by dissident writer Vassily Aksyonov, was nothing "other than a supreme farce. Decade after decade his pen failed to create anything worth reading. Meanwhile, his mouth created nothing but propagandistic banalities."

The most shameful (and least known) episode, however, concerns Neruda, a lifelong, unrepentant Stalinist. During his stint at the Chilean Embassy in Paris dealing with asylum applications from Spanish Civil War refugees, Neruda is said to have heavily favored those who shared his hard-line beliefs when it came to issuing visas. One wonders how many of the rejected perished in concentration camps or wound up as slave laborers under Nazi and Vichy rule. There's also the little matter of Neruda's aiding and abetting under diplomatic cover an unsuccessful assassination attempt on Trotsky in Mexico in 1940, an action he defended his entire life.

So Grass is in good company then. Since Hamsun and Neruda are still read and well thought of, it's a good bet that in the long run his cultivated self-image will survive largely intact -- his conscience is another matter.

None of this, however, is to dispute Grass' qualities as a writer, or anyone else's; I happen to like Neruda's (non-Stalinist) poems and greatly admire Pirandello, whose works I studied at university. This is only to say that perhaps we shouldn't be so surprised when the prize blows up in our faces. (Among other things, Alfred Nobel invented dynamite.) We seem to think that the Nobel should be bestowed on those of seemingly unblemished virtue -- which is why such reviled figures as Louis-Ferdinand Céline and Ezra Pound never got the gong. (Bertolt Brecht might have won it but for his philandering, which was rumored to have irked a cuckold who sat on the committee.) No question that there's an aura about the Nobel that seems to transform dwarfs into giants, mice into men, and disarms skeptics in the process.

Then I think, wait a moment, there is a writer who embodies all the ideals the Nobel stands for: Samuel Beckett (Ireland 1969), whose centenary year this is. Unbeknown even to many of his closest friends until after his death, Beckett had been a member of the French resistance during the war and received the Croix de Guerre. This is all the more admirable in that Beckett was from a neutral, if not impartial, country. (Sinn Fein was not entirely unsympathetic to the Axis powers on the dubious principle that the enemy of my enemy is my friend.) Beckett was deeply committed to human rights; he firmly and totally opposed apartheid, and from a very early age was hostile to all forms of racism and anti-Semitism; he supported human rights movements throughout the world, including Amnesty International and Oxfam. He lent his prestige to freedom movements behind the iron curtain, worked on behalf of the campaign to free Vaclav Havel and was a vigorous opponent of censorship. Though hardly a saint, he also apparently gave away most of his Nobel Prize money to those who needed it. True to character, Beckett did all of this out of the public eye, with no finger wagging, no pious speeches; for he exemplified, to his roots, in his writing, in his life, the adage "Suaviter in modo, fortiter in re" -- discreet in form, strong in content. A noble laureate indeed.