The possible scenarios that may have led to Yankee pitcher Cory Lidle's fatal plane crash into a New York skyscraper. 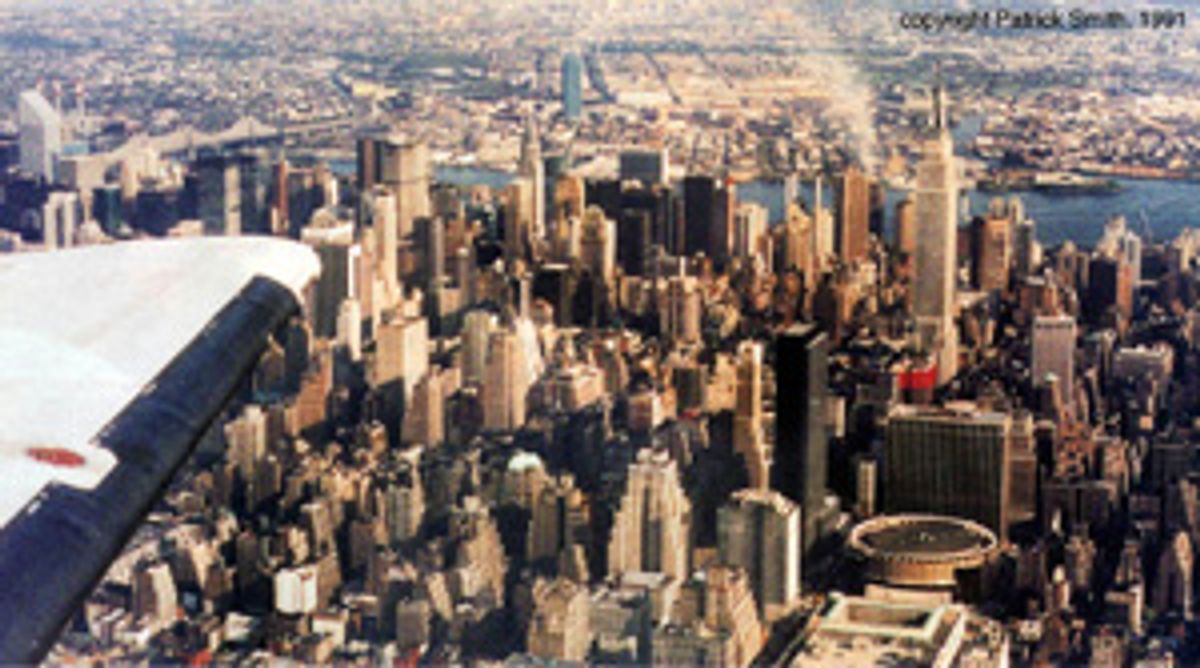 When it comes to security, suffice it to say that these days we're a bit too tightly wound. Is that an overly brazen indictment of our national consciousness? I think not, especially when airplanes are involved. Looking back over the past five years, there have been plenty of comparative non-events that nearly became national emergencies -- from fears of unknown perpetrators allegedly zapping pilots with laser beams, to exaggerated claims of imminent catastrophe at the hands of terrorists with liquid explosives.

On Wednesday, when a light plane slammed into a condominium tower in Manhattan, killing New York Yankees pitcher Cory Lidle and one other passenger, the hype machine was primed and ready. No airplane crash should ever be taken lightly, and New Yorkers are certainly entitled to a bit of jumpiness when anything overhead goes boom. But it wouldn't be too cynical to think that there are those in power prepared to exploit such incidents, those eager to get the NORAD generals jogging through their corridors and the F-16s roaring overhead. Alert Code Orange -- and has the president been notified?

He was. But battle-scarred New Yorkers, to their credit, remained calm and composed as details of the crash emerged. By all accounts, Gotham's citizens understood quickly that this was not the second coming of Mohammed Atta, and went about their business with the appropriate level of concern for the victims.

Good for them, and good for America, allowing us to turn to the accident itself and ask: How, exactly, does such a thing happen?

Not easily, but it's critical to begin by drawing a line in the sky. That line puts commercial airliners and their crews on one side, and general aviation aircraft (i.e., private planes) and their pilots on the other. Not to demean the skill and expertise of thousands of license holders and aircraft owners nationwide, but these are very different worlds with separate rules and protocols affecting everything from pilot medical standards to cockpit equipment.

There's a tendency to equate commercial flying with recreational flying in more ways than are warranted. Seven years ago, when John F. Kennedy Jr. lost control of his Piper Saratoga and crashed into the ocean near Martha's Vineyard, much was made of a dastardly phenomenon called "spatial disorientation." Good god, people wanted to know, what if an airline captain were similarly to lose his bearings? Such thinking neglected to consider that airliners are flown by vastly more experienced crews with vastly more sophisticated equipment.

Although it was merely a single-engine Cirrus -- a high-performance, four-seat model about the size of a car -- that impacted the Upper East Side building, it could have been a 757, right?

Theoretically, except that a plane hitting a building requires one or more of the following circumstances, all of which are far more likely to affect a private craft than a commercial one:

1) An incapacitated pilot.
2) A pilot who is lost, and in weather or darkness that restricts visibility such that a 50-story tower becomes invisible.
3) A catastrophic malfunction that has rendered the machine uncontrollable.
4) A less than catastrophic malfunction or problem that distracts or otherwise leads the pilot to commit a fatal, and entirely avoidable error.
5) It wasn't an accident at all.

Taking the last point first -- because in America, 2006, we have to -- it was hard from the outset to imagine a terrorist's rationale for steering a small aircraft into an anonymous residential building. Granted, not all air crimes are perpetrated by terrorists. We remember, among others, the 15-year-old who steered his single-engine Cessna into a high-rise in downtown Tampa in January 2002. There was also the man in 1989 who hijacked a two-seater (from the same flight school I once attended) and peppered the streets of Boston with fire from an automatic rifle. And there was Frank Eugene Corder, the student pilot, high on crack, who in September 1994 crashed a stolen Cessna four-seater on the South Lawn of the White House, killing himself on impact.

There's no reason whatsoever to suggest Cory Lidle was on a suicide mission. Some eyewitness accounts say the plane was flailing, wallowing, banking sharply. Others say it emerged from clouds -- where, if flying under so-called Visual Flight Rules over the city, it never should have been -- and smacked straight into the brick fagade of the Belaire condominiums. Eyewitness reports of aviation mishaps are notoriously untrustworthy, and premature speculation can be embarrassingly unprofessional, but I'm hearing things that point to Nos. 2 or 4, above. No. 3 is possible, but highly unlikely. Small planes, even in the throes of total engine failure, are stable, surprisingly nimble, and can glide exceptionally well. Heck, the Cirrus SR20 even has a parachute! There's not a whole lot, free of human error, that can send one careening into a skyscraper.

However, combine a mostly surmountable problem with a pilot's inexperience or lack of skill, and suddenly No. 4 is flashing brightly as a likely culprit. Who am I -- a pilot who, as a freshly licensed rube, almost got himself killed because he was too busy looking at a sexy teenager instead of out the window -- to criticize the aeronautical acumen of Cory Lidle? But sadly, the precedent is there. "Pilot error" can mean lots of things, some more subtle than others, but in the annals of accidents involving light planes, many, many aviators, through incompetence or gross error, have turned perfectly survivable snafus into fatal wrecks. They wander into thunderstorms; they fly into ice and snow when they're neither equipped nor certified to do so; they run out of fuel in the middle of the night; they lose control after engine failures.

A possible scenario for what happened Wednesday in New York: Lidle takes off from Teterboro airport in northern New Jersey, one of the nation's busiest general aviation fields, and heads eastbound, looking forward to a dramatic panorama over Manhattan. No shame in that -- the air corridors along the Hudson and East River provide one of most spectacular views on earth, and are often bustling with sightseers, traffic copters and other small craft operating under Visual Flight Rules.

Then, over the city, something happens. The weather, somewhat marginal to start with, is closing in. Already pressing his luck, and at too low an altitude, he finds himself enveloped in clouds. Now he's lost and disoriented. It's a classic, and classically unfortunate, situation for a novice flyer (Lidle had his license for approximately one year). Suddenly there's a break in the mist -- but there's the Belaire directly ahead. He rolls sharply, but there's not enough room.

Or maybe the engine fails, or loses power. The plane begins to descend, and Lidle, knowing he's in trouble, turns toward nearby La Guardia, hoping to reach a runway, or even a splashdown in the East River -- anything but the sheer, concrete canyons of the Upper East Side. But he misjudges the turn. He banks too steeply as that 50-story complex looms ahead, neglecting to monitor airspeed, and stalls. Another classic mistake. With rooftops all around, there's not enough room to recover from the stall. He panics, adding power, kicking the rudder, twisting the ailerons. The plane is out of control now, and down it goes.

We'll find out eventually -- but it sounds to me that Lidle, one way or another, and like many before him, got himself into a situation he couldn't get out of. As we all know, flying machines and tall buildings share a certain history in New York -- not entirely surprising for a city with so many spires and so much air traffic. Aside from the most obvious event, there have been at least two others. In 1945, a B-25 bomber struck the Empire State Building killing 14 people. And in 1977, a New York Airways S-61 helicopter crashed on the helipad atop the Pan Am Building -- today it's the MetLife building. Five people died, including a pedestrian at the corner of Madison Avenue and 43rd Street.

Cory Lidle, meanwhile, was not the first or the most famous Major League baseball player to be killed in an aircraft mishap. Most notable was Roberto Clemente, a Hall of Fame outfielder with the Pittsburgh Pirates, who perished in an accident off the coast of his native Puerto Rico in 1972. Clemente, whose body was never found, was on his way to assist victims of an earthquake in Nicaragua.

Neither was Lidle the first Yankee to meet his demise at the controls of his own plane. (Lidle hadn't been with the team for very long, having been traded from Philadelphia this season.) In 1979, in mid-season, Yankee catcher Thurman Munson was killed while practicing takeoffs and landings in his newly purchased Cessna Citation -- a twin-engine business jet. Munson's family was back home in Ohio, and he had acquired the jet in order to visit them on off days during the season.

Reportedly, after a scenic tour of the city, Cory Lidle was planning to turn west and head home to California.