Greil Marcus searches for the prophetic voices of America and finds them in Abraham Lincoln, David Lynch and Riot Grrrl bands of the '90s. 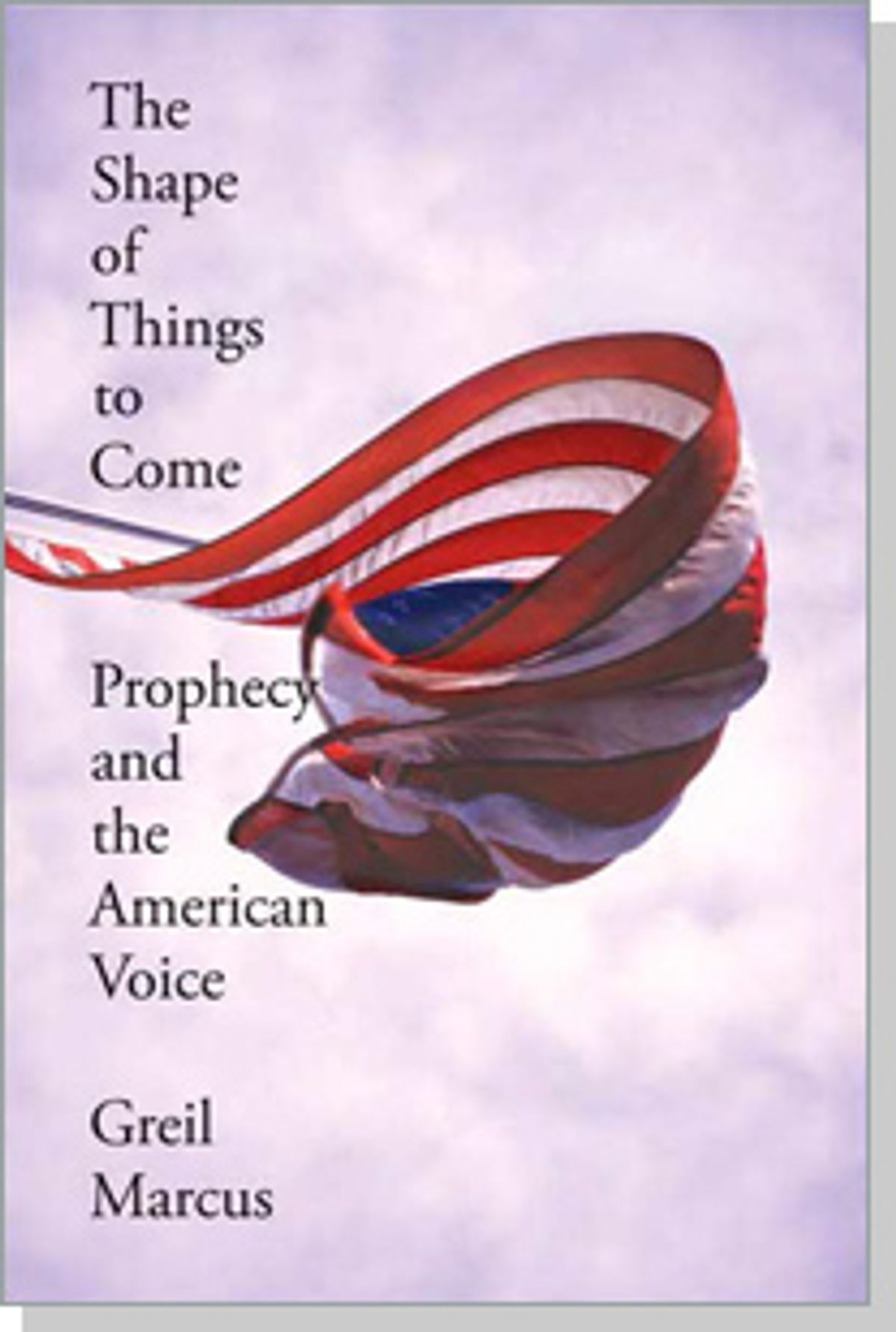 There are no love songs in this book, none of the knowledgeable musings on doe-eyed crooners, wild-eyed blues shouters or pin-eyed punk rockers one might expect from Greil Marcus, the noted cultural critic, music historian and pop champion. Instead, Marcus has taken a somber subject for his latest exploration of American cultural history. That subject is nothing short of our own annihilation.

In "The Shape of Things to Come," curtains go up with a series of quotations from famous thinkers and others either directly or analogically related to 9/11, which seems a decent enough place to start thinking about America's destruction. From there, Marcus' introduction summons the voices of John Winthrop, Abraham Lincoln and Martin Luther King Jr., who, in their most seminal speeches, repeat differing versions of a contract between Americans and God, as well as Americans and other Americans. For all three, the golden opportunity offered by the New Jerusalem of America, the opportunity to create a perfect community, comes with the threat that should perfection remain unattained, divine and mortal judgment will be swift, damning, eternal and seriously unpleasant (we're talking hail of bullets and brimstone). Basically, get with the utopia or nice knowing you.

Obviously, Marcus is up to something deeper than pop music interpretation here. In separate chapters, he explores his ideas by refracting the notion of the apocalyptic contract through the later novels of Philip Roth, "Bill Pullman's face" in "Lost Highway," "Twin Peaks'" Laura Palmer, and, most successfully, woozy punk singer David Thomas. As the title recommends, Marcus is looking for evidence of the prophecies of his three primary voices in the ones that follow. One can hear the clear, if hysterical, echoes of this all-or-nothing conception in the rhetoric of the Christian right or on Fox News, but Marcus contends that it truly speaks in the dark corners of art.

This is a Greil Marcus book, after all. Those dark corners are where he has always felt most comfortable, resurrecting marginalized voices, songs and figures to lay bare the nature of the culture. "Mystery Train" (1975) and "Lipstick Traces" (1989) remain two of the most compelling investigations of music ever published. "Invisible Republic" (1997) imagined Bob Dylan and the Band's 1967 "Basement Tapes" as a pivotal cultural moment foreseeing the fallout of the Summer of Love while connecting with musical currents from a deep past. More recently, in "Double Trouble" (2000) and "Like a Rolling Stone: Bob Dylan at the Crossroads" (2005), he delved into the psyche of the nation by showing how key cultural landmarks (Clinton's presidency, Dylan's epochal tune) resonated with America's struggle with sin and redemption. In "The Shape of Things to Come," his loci are weirder and, frankly, less compelling, as is his argumentative approach, normally so fluid and breezy. Here his writing feels stifled, dry and slowed by its own intricacies.

Marcus' establishing shots are sturdy enough, as he lays out his conception of the prophetic voice that builds America. John Winthrop's 1630 speech "A Model of Christian Charity" envisioned for the Puritans a "City upon a hill" that would shine forth through the ages, as its citizens were given the opportunity, through freedom, to speak, act and judge for the glorification, or the damnation, of all. As Marcus writes: "The American blessing or curse -- the terror or embrace that is found as a reward -- is to live out that absolute, or live in its shadow." Marcus skips 200 years ahead to Lincoln's second inaugural address, quoted on the wall inside his monument, which wonders whether the horror of civil war will ever be enough to appease God for America's sins. Marcus finds Lincoln holding to Winthrop's bargain, to the potential for absolute salvation or damnation. From the steps of the Lincoln Memorial comes the voice of Martin Luther King Jr., at the March on Washington for Jobs and Freedom in 1963. King reminds his listeners that those who seek to build a better America risk that same catastrophic retribution should they fall short of righteous success.

The trouble is that "The Shape of Things to Come" mostly fails to live up to the drama of these originary speakers. Marcus is hard at work fitting Roth, Lynch, Thomas and the dozens of lesser subjects he examines to the brutal prophecies they supposedly represent. He bulks up Philip Roth's late oeuvre of paranoid dystopianism, David Lynch's bizarre vision of an American film noir nightmare, and David Thomas' cranky yet hopeful visionary rock with ancillary referents and sprawling meanings that mean to cut to the heart of the American experience, but end up becoming mostly tangled in the long journey to connect them to his chosen American prophets.

This book grew out of a series of lectures, classes and teaching fellowships, and like the hip professor Marcus certainly makes, flashes of punk rock, noir film and old-timey music peek from every corner of the book. Yet Marcus' readers, it would seem, have not done their homework, and the prof must explain everything they have missed in detail, while still sticking to the lesson plan. This causes two problems that make reading this book a frustration: Endless narration overshadows illuminating references, while super-dense references act more to confuse than to illustrate. Marcus is a gifted writer, but the complex narratives at work in Roth's novels and Lynch's films require so much exposition that discussion becomes messy and drawn out. Also, Marcus has a hard time stopping. So after we enter the world of Laura Palmer and "Two FBI agents arrive in Deer Meadow to take over the Banks case..." we have a long progression of and then ... and then ... and then.

The narration can be taxing, but the multitude of references can be positively numbing. David Lynch's absurdist noir in "Lost Highway" makes even less sense when the plot is not only meticulously laid forth, but also augmented and interrupted by mentions of dozens of noir films, novels, anecdotes about actors, and so on. In the midst of exploring "Twin Peaks," Marcus takes readers through the plotline of Ross Macdonald's noir novel "Blue City": "Macdonald's dialogue has the slow build-up and deadpan ricochet used by such lead actors as Dick Powell and Humphrey Bogart, and even more effectively by players like Thelma Ritter. 'How well do you know Kerch?' says Carla Kaufman, a B-girl and prostitute (imagine Gloria Grahame in 1947)"

Yet, while the larger topics often fail to catch fire, the smaller anecdotes and descriptions tend to be brilliant. Philip Roth's novels seem suddenly bitter and hopeless when contrasted with the USA trilogy of John Dos Passos, which Marcus unpacks swiftly, vibrantly and with a sense of real awe. Similarly, while readers may need a few dozen pages to join the excitement over "Bill Pullman's Face," in the midst of the chapter Marcus presents the films of Bruce Conner. The chapter attempts to show "Lost Highway" as envisioning pastoral and berserk visions of America evoking the terrifying freedom of America that itself evokes that trio of historic voices where the book began. Yet in just a few pages, describing the experimental films Conner made in the '60s and '70s, where stock footage of familiar objects and scenes was cut to form meta-narratives of memory and American identity, Marcus actually makes his point more forcefully than he ever could with "Lost Highway" or with a thousand pages on Pullman's smirk.

In the third chapter Marcus attempts to locate the "real" America in the character of Laura Palmer -- a cocaine-snorting teenage hooker masquerading as homecoming queen. Yet amid endless dissections of the seething evil beneath the bland normalcy of Twin Peaks and its poster girl, Marcus hits on his "real" America when he steps briefly into the Pacific Northwest of the early '90s, and for just a few pages focuses on the radical, feminist, punk movement that became known as Riot Grrrl. Marcus charts with harrowing emotional investment the early singles of Heavens to Betsy, where Corin Tucker, later of Sleater-Kinney, got her start. One gets the sense that, through the anger, the disconsolate screaming, the frank dealings with rape and abuse that informed Heavens to Betsy, Bratmobile and the other Riot Grrrl bands, writers and activists that sprang from Olympia, Wash. -- a town so close to Twin Peaks -- Marcus' theoretical wanderings hit pay dirt. What are mere shadows and whisperings in art become the full-throated howlings of real life.

Heavens to Betsy have voice, and they go for the absolute, doing what they believe is right and judging what surrounds them. Reading this section, one thinks: "Well, shit, this is what the chapter should have been about!" Included is even a quote from a Riot Grrrl zine that deftly and cuttingly critiques "Twin Peaks." "FUCK TWIN PEAKS," reads the zine, before excerpting a review: "Laura Palmer is hailed as this year's breakthrough dead girl. 'My father killed me,' she says, but Cooper still gets the last word. With an end like that, there's really no breakthrough." Through all his hemming and hawing about Lynch, Marcus never once judges his own subjects; but inadvertently his incisive digression has gone and done that work too.

Then something gives way, and the last 80 pages of the book are thunderous and thrilling, as though after all that struggle and strain, the text itself had gained the voice called for by Winthrop, Lincoln and King. David Thomas, enigmatic singer of '70s proto-punks Rocket From the Tombs and later of post-punks Pere Ubu, speaks and sings like a drifter, a burnout savant, and sometimes just simply like a derelict. In him, Marcus finds the perfected echo of his early American heroes, and most successfully finds the prophetic voice, the American convinced that speaking and acting his own truth is the only route to salvation and redemption. Marcus also finds his best writing, at turns gleeful and weighty, and without recapitulation after recapitulation, sub-referent breeding sub-referent, Marcus is free to write clearly and powerfully:

Better still, Marcus makes one believe that Thomas is capable of fulfilling such impressive ambitions. The book's epilogue runs swiftly through Allen Ginsberg's antiwar poem "Wichita Vortex Sutra," a work that documents the experience of living among the voices of America without losing one's own. It is a thrilling finish, and stands as a powerful bookend to the introductory array of 9/11 responses and texts of cataclysm and loss.

"In 'Wichita Vortex Sutra' the nation is left without a creator or a judge -- prophecy has not summoned an absolute or a finality. Instead it has retrieved the prosaic, where each citizen has to take the same stand, struggle for the right words, convince others to listen. 'A lone man talking to myself' -- and what comes down is not promise of idea or miracle but fact. 'The war ... is over now,' the old man says, and it's the strangest thing. Now, as you listen, really for the first time in the poem, in its last cadence, you understand that the war actually happened."

Finally, in these last pages of the book, Marcus really takes flight, writing vividly and lovingly while evoking, and not just theorizing, nothing less than the terrific freedom that exists in the voices of America. Maybe the subjects of David Thomas and Ginsberg are closer to his heart, or simply set free from expository necessities. Either way, the thesis of the book finally starts to take shape and make sense. The terrifying balance between the individual and society in America finally rings true. It's too bad it takes so long to get there.

J. Gabriel Boylan is a freelance writer living in Brooklyn. He is also co-founder of the blog Heaven and Here.