As civilian casualties climb, the U.S. makes plans to keep 140,000 troops in Iraq until 2010. Will the public in either country permit it? 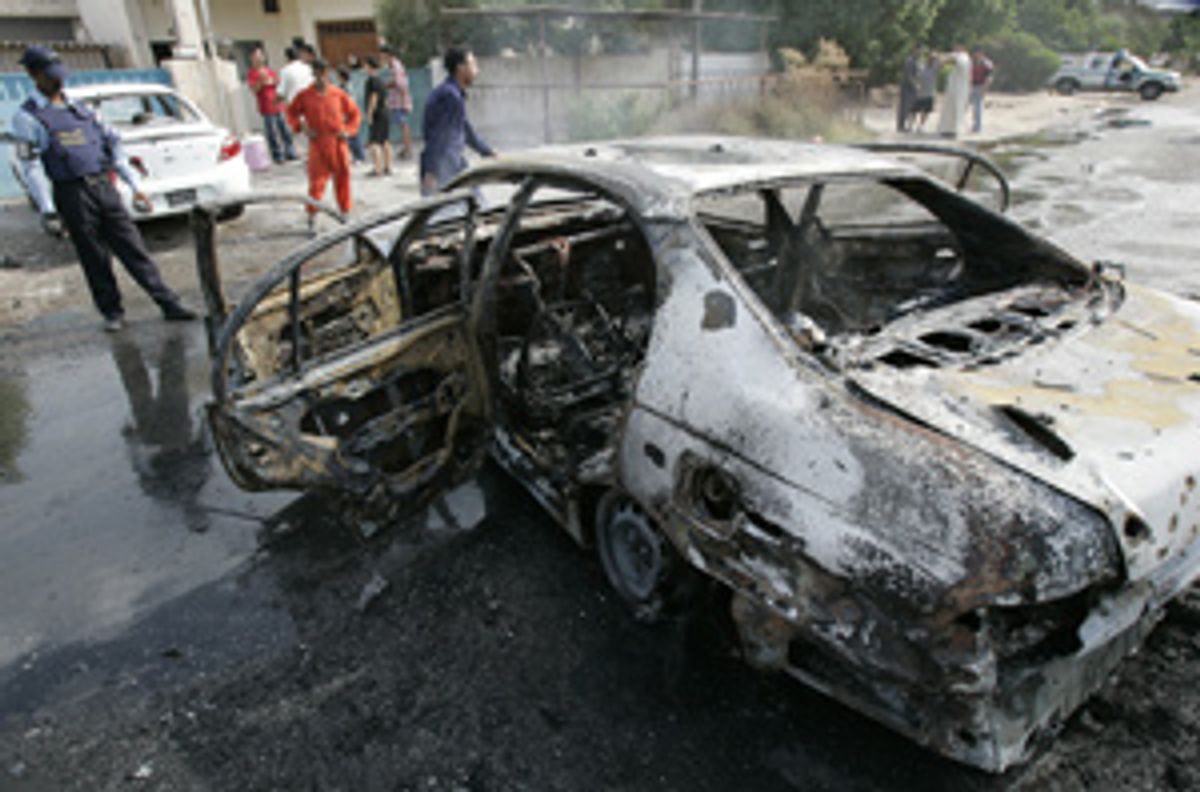 The situation in Iraq is far, far bloodier than we knew, according to a new study published in the Lancet. The situation in Iraq is not getting any better, according to U.S. generals. But the Department of Defense has to allow for the real possibility that some 140,000 American soldiers will be stuck in the country for four more years, according to the Army chief of staff. Can the U.S. troop presence in Iraq really be sustained at these levels as the country devolves into sectarian civil war? Is the United States making the situation worse rather than better?

Reuters reports that Army Chief of Staff Gen. Peter Schoomaker said Wednesday that as he projected the needs of the armed services, he had to plan on there being 141,000 U.S. troops in Iraq through 2010. He was careful to say that he was making no predictions about what might happen in Iraq, and that keeping 15 combat brigades there for so long was not a foregone conclusion. To Schoomaker, however, it was obviously a real enough possibility that he needed to keep on hand the munitions that such a force might need.

The sources of Schoomaker's prudent pessimism are not far to seek. On Wednesday, George W. Bush again laid out his rationale for declining to consider a drawdown of U.S. forces. He said that if the "terrorists" were not defeated in Iraq, they would come after the U.S. on its own soil. "If we were to abandon that country before the Iraqis can defend their young democracy, the terrorists would take control of Iraq and establish a new safe haven from which to launch new attacks on America." Bush did not explain how he thought a small minority of Sunni Islamists (most Sunni Arabs are still relatively secular) could "take over" a country with a Shiite majority and a powerful Kurdish minority. Bush added, "We can't tolerate a new terrorist state in the heart of the Middle East with large oil reserves that could be used to fund its radical ambitions or used to inflict economic damage on the West." Although he said he was willing to try new approaches in Iraq, the tenor of his remarks was "stay the course."

Although at his news conference Bush groped for signs of progress in Iraqi parliamentary wrangling or in the confrontation of Marines with Shiite Mahdi Army fighters in the small city of Diwaniyah, the pickings were slim. Gen. George Casey, the top U.S. officer in Baghdad, said recently that attacks by Iraqi insurgents were as high as they had ever been. Casey had earlier expressed a hope that two brigades could be brought out of Iraq in late summer or fall, but the reduction proved impossible when the security situation kept deteriorating.

Instead, America has thrown thousands of U.S. troops, with Iraqi army support, at the task of crippling Sunni Arab guerrilla bands that virtually rule many districts of west Baghdad. This "Battle for Baghdad" -- or, as the military calls it, "Forward Together" -- has met with only mixed success so far, and the guerrillas have brazenly continued to detonate massive bombs and kidnap and kill.

Bush's strategy in Iraq has been dependent on building up a new Iraqi army and police force that could take over patrols from U.S. forces. The new Lancet study reveals just how massive the failure of these Iraqi security forces to restore law and order has been. Carried out by the Johns Hopkins School of Public Health and published in the prestigious British medical journal on Wednesday, the study estimates that excess deaths from political violence in the wake of the U.S. invasion of Iraq fall somewhere between 420,000 and 790,000.

Bush, who only a year ago estimated the number of Iraqis killed since his invasion at 30,000, dismissed the findings as "not credible." Many researchers in the public health field, however, spoke well of the study's rigor. At the very least, it demonstrates that United Nations estimates of 3,000 deaths every month from political violence are far more plausible than much lower Pentagon figures.

The Lancet study did find that the proportion of Iraqis who died at the hands of U.S. troops, which is about a third of all deaths from political violence, had actually declined in 2006. The reason for the drop, however, is not a heartening one. More Iraqis than ever before are killing one another in the midnight "war of the corpses" that leaves the capital and some other cities littered with cadavers in the morning.

The U.S. military in Iraq is trying to hold the country together by main force, as though it were putting tape on a patient who had been eviscerated. But every day the country loses more of its structural integrity, as sectarian killings pile up and car bombs and assassinations by Sunni Arabs provoke vicious reprisals by Shiites or Kurds, depending on their original target.

Over the past week, Shiite-Sunni tension escalated further. The assassination on Monday of the brother of Iraqi Vice President Tariq al-Hashemi, a Sunni fundamentalist, was widely seen as a blow against the process of sectarian reconciliation promoted by Shiite Prime Minister Nouri al-Maliki. Sunni Arabs, already chafing under U.S. patrols and search-and-seizure missions, were further angered on Wednesday when a quorum of 140 members of the Iraqi Parliament passed a law allowing the formation of provincial confederacies, a move the Sunni Arabs had opposed. The law is a step toward a unified Shiite megaprovince in the south. The willingness of Shiite politician and cleric Abdul Aziz al-Hakim, leader of the Shiite bloc in Parliament, the United Iraqi Alliance, to pass the law in the absence of the Sunni Arab delegates telegraphed the contempt in which Sunnis are held by the new national elite.

Politically speaking, with the bloodshed mounting, can the U.S. military stay in Iraq at its present levels for an additional four years? More than half the American public now considers the invasion a mistake. And some 80 percent of Iraqis want the U.S. to leave -- some 120 parliamentarians signed a motion to that effect. What will happen if crowds come out in the tens of thousands across Iraq to demonstrate against further American occupation? At what point will Grand Ayatollah Ali al-Sistani, the spiritual guide of the Iraqi Shiites, issue a decree or fatwa demanding an American departure?

The car bombings and other violence in Iraq are often blamed on the United States by angry Iraqi mobs. They view the growing sectarian violence as the result of an American attempt to divide and rule. Given what polls in Iraq are telling us about the unpopularity of U.S. troops in the country, given what public health experts are telling us about the inability of those troops to stem the growing tide of sectarian killings, and given the waning support for the whole Iraq enterprise among the American public, the rationale for keeping so many ground troops in Iraq has come increasingly into question. Whether they will remain in such numbers until 2010 is no longer a military decision. It is a political decision that will jointly be made by the United States and Iraq.