In desperate straits, the GOP has reverted to blaming the Clinton administration for its failed policy toward North Korea. 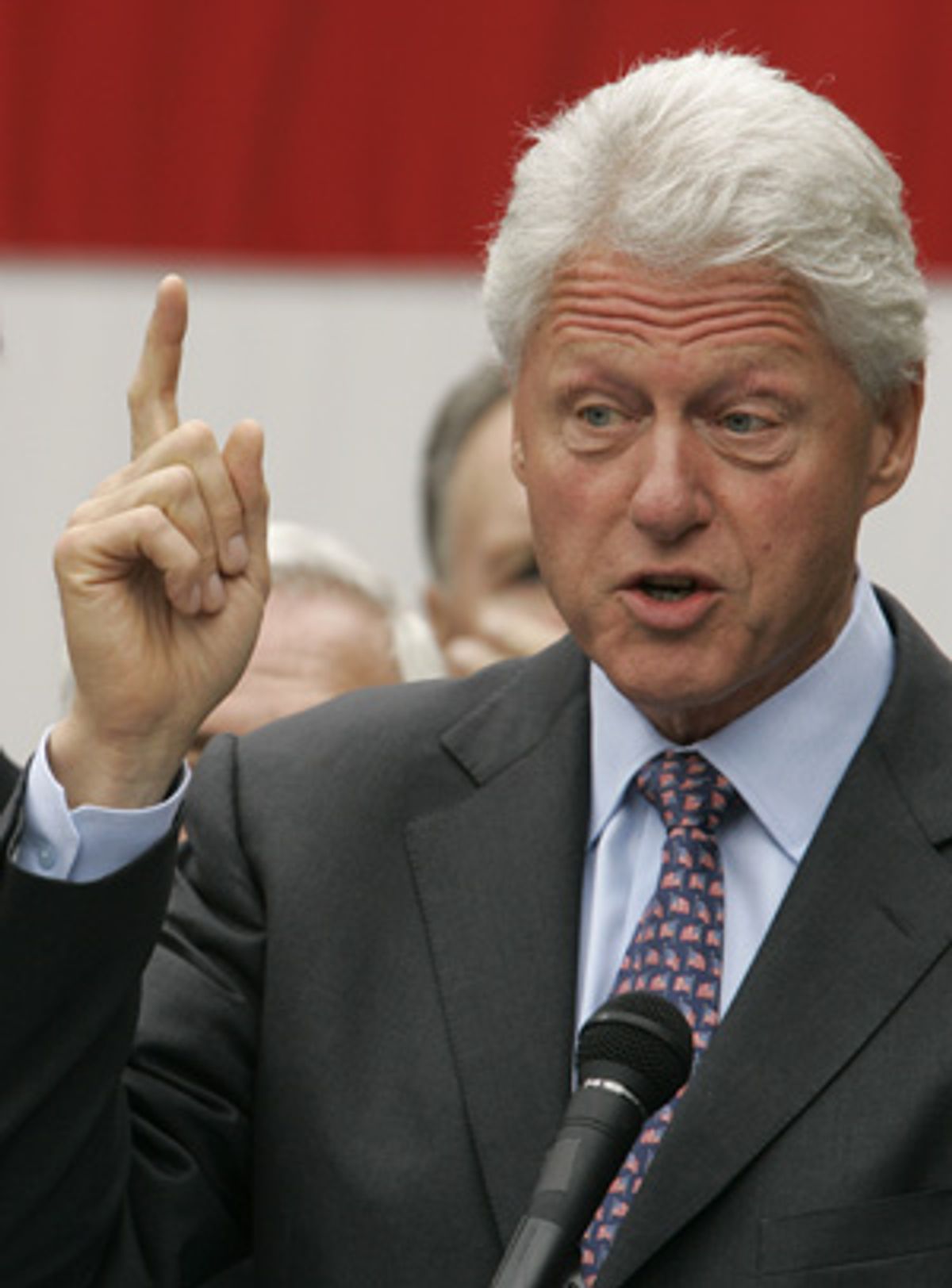 North Korea's apparent nuclear blast exposed the incoherence not only of Bush administration foreign policy but of the Republican midterm political strategy as well. While White House underboss Karl Rove has long planned to win this November's elections on a "national security" platform questioning the strength and patriotism of the Democrats, the developments of the past several days have showed that the Republicans are in a reactive mode, unable to master the policy agenda, and reduced to flailing against their perennial target: They've reverted to blaming Bill Clinton.

Debating the Korea policy of the Clinton administration could hardly be what Rove had in mind when he designed his party's midterm strategy. His original plan, a variation on the successful blueprints used in the 2002 and 2004 elections, was to label the opposition "Defeatocrats" who would "cut and run" from the "war on terror," leaving the nation defenseless against bloodthirsty enemies. What Rove's plan obviously didn't contemplate was continually worsening circumstances in Iraq -- and stark proof of the resulting American military and diplomatic paralysis in defiant moves by North Korea and Iran. In an unusual moment of lucidity and candor, National Review's Jonah Goldberg confessed last Monday that Pyongyang's test -- although possibly a distraction from the Mark Foley mess -- undeniably represents "a failure of U.S. policy ... President Bush denounced the Axis of Evil five years ago and promised that he would do everything to keep its members from getting nukes. Well, North Korea just detonated one. Iran is well on its way to getting one. And Iraq, well, that's not quite the bright spot we hoped it would be." Not quite indeed, particularly with former pal Bob Woodward now denouncing the president for concealing the truth about Iraq from the American people and himself.

Still, it was startling to watch the Republicans respond to a boilerplate critical statement from Sen. Hillary Clinton by mounting a full-bore, multilevel assault on her husband's policies. At first, the White House refrained from "playing the blame game," as the president likes to say, and instead allowed surrogates to do the attacking. The first to step forward, unsurprisingly, was Sen. John McCain (or "Rove's poodle," as he is known without affection on a listserv I read). Speaking as if there had actually been nobody in charge at the White House, the State Department, the CIA and the Pentagon for the past five or six years, McCain excoriated the 1994 agreement negotiated between the Clinton administration and the North Korean regime as "a failure" that had rewarded Pyongyang repeatedly without achieving anything.

Swiftly following McCain's attack, the Republican National Committee began raking former Secretary of State Madeleine Albright as a stooge of Kim Jong Il. According to RNC chairman Ken Mehlman, the former secretary is somehow responsible for North Korean nukes because she shared a toast with the dictator and gave him an autographed basketball. This tactic was reminiscent of those old pictures of Donald Rumsfeld shaking hands with Saddam Hussein -- except that Albright had actually accomplished something when she talked with Kim.

Both McCain and Mehlman ignored the central achievement of the Clinton policy, which was to maintain monitoring of Pyongyang's plutonium supply for eight years -- and thus prevent the building of plutonium bombs or the transfer of those materials to other states or terrorist organizations. The North Koreans started a secret uranium enrichment program precisely because they could not use reprocessed plutonium to build weapons under the 1994 Agreed Framework. Since the Bush administration cast aside that process in 2002, Kim's scientists have been freed from the scrutiny of international inspection.

Whatever the merits or defects of Clinton's diplomacy in Asia, however, the political risks of focusing on that topic seem far greater than any potential rewards. Already once in this season the Republicans have learned (or should have learned) that angering the former president is unwise; he is far more popular than Bush is and considerably more skilled in argument than anyone on the other side, including McCain.

Even if Clinton's policy was completely misguided, why should any sane voter accept the notion that current policy problems are his fault? Didn't the mature statesmen and women of the Bush regime declare a clean break from the previous administration as soon as they assumed power? Where have they been since January 2001 and what have they been doing? What are they going to do now?

Coming from the Republicans as they face the increasing prospect of defeat in the midterm elections, the Clinton-bashing tactic stinks of political desperation and policy exhaustion. Flogging a "Big Dog" piñata may motivate the party's die-hard right-wing base -- but if that is Rove's objective four weeks before Election Day, he, his president and their party are in even greater trouble than the latest polls suggest.