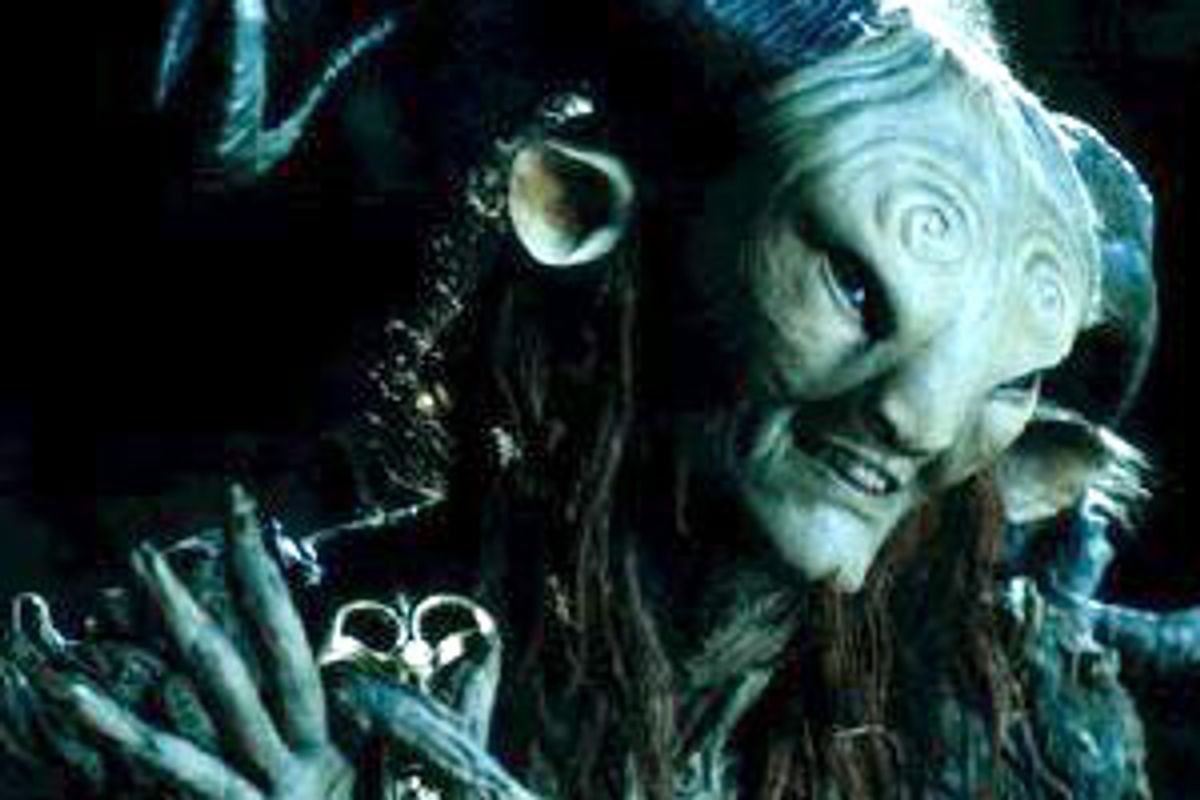 We're often so entranced by the wonder of fairy tales that we overlook their horror. Even old folk tales that have been cleaned up and reworked over the ages still harbor relics from the days when we thought it was a good idea to rule kids by fear: Parents and stepparents with sinister hidden personalities; children who get baked into pies; winged or scaled creatures who demand impossible tasks of a hero, for reasons that are sometimes murky.

This is a somber, lovely picture, set in Franco's Spain a few years after that country's civil war. It's rich both in metaphorical terms and in literal ones. Del Toro's imagery is so vivid and concrete that it's likely to change the color of your sleep: A writhing, cooing root that's "almost" a human baby; a faceless creature with pale wrinkly skin draped over its willowy bones, its eyes located in the palms of its hands instead of in its head. Those far-side-of-sleep images (and the movie contains many others) can be read as symbols and stand-ins for other things -- a nascent country that might have been; so-called leadership that's howlingly blind -- but del Toro isn't playing a game of allegorical one-to-one matching here. The movie's meanings emerge from its visuals instead of being driven by them. Del Toro has mastered the delicate, difficult feat of using pure sensation to make us think (listen to a podcast of him talking about the film here).

The heroine of "Pan's Labyrinth" is a little girl who won't be little for much longer: Ofelia (played by a wonderful young Spanish actress named Ivana Baquero) is just on the edge of adolescence -- a time that seems to go on forever while you're living through it, but is really only just the barest sliver of moon in a lifetime. Her father has died, and as the movie opens, she's traveling through the Spanish countryside with her fragile, pregnant mother, Carmen (Ariadna Gil), to a remote military outpost where the father of the baby, Carmen's new husband -- and Ofelia's stepfather -- is waiting for them. That stern ramrod of a man is Captain Vidal (Sergi López, of "Dirty Pretty Things"), and when he greets the arriving travelers (they're late), it becomes clear that he's barely interested in Carmen and has even less interest in Ofelia: He's fixated on his unborn child, which he's certain will be a boy.

Although Carmen urges Ofelia to make the best of her new life, she's desperately lonely in her cold surroundings: The captain's huge, dark house -- he has turned an abandoned mill into his military headquarters -- creaks and groans at night as if it were alive; there are ghastly creatures carved into the posts of the bed she shares with her mother. Her only friends are the cherished books she has brought with her and the captain's sympathetic but cautious servant, Mercedes (Maribel Verdú, of "Y Tu Mamá También"), who is secretly spiriting food and medicine to the rebel fighters who live in the nearby forest, still hoping to overthrow Franco's oppressive government.

And then a greenish, buzzing insect that Ofelia befriended in the forest just before her arrival reappears to her and transforms, before her eyes, into a tiny flying man. He leads her to an underground lair where a strange faun (Doug Jones), with curly ram's horns and piercing feline eyes, reveals her true identity to her: He believes she is really Princess Moanna, daughter of the King of the Underworld. But before that's certain, she must perform three dangerous tasks.

Ofelia's -- and del Toro's -- fantasy universe includes a secret garden with mysterious dead ends and passageways, and a miniature kingdom beneath the roots of a gnarled tree, where a fat king toad lives atop a carpet of mud and millipedes. At one point Carmen makes a new dress for Ofelia, a dark-green pinafore that's intended to impress the captain. On this very serious-looking little girl, with her dark bobbed hair and even darker eyes, the dress is an inversion of the cheerful blue frock worn by Alice in Wonderland. But in "Pan's Labyrinth," the through-the-looking-glass world and the real one are one and the same. The horrors of Ofelia's real life (her mother's dangerous and difficult pregnancy; her stepfather's murderous indifference to her) are barely distinguishable from the fantasy obstacles she faces.

Del Toro draws no comforting reality/fantasy boundary for us. Ofelia can't awake from the reality of her dream. And this is where I need to warn parents: "Pan's Labyrinth" opens around holiday time, which may lead some of you to think it's a great thing to take the kids to while they're on vacation. This is a true fairy tale, and one of the finest fantasy pictures ever made, but please do not take your young children to see it unless you want them to be scarred for life. The movie is probably OK for an extremely well-adjusted 12-year-old. But even extremely well-adjusted grown-ups may find the movie's creatures and crawlies -- and its less fantastic violence -- stalking their nightmares.

That, I'm sure, is del Toro's intent. "Pan's Labyrinth" drew glowing praise at Cannes last spring, and this is one case in which rapturous word of mouth doesn't ring hollow. This is del Toro's sixth feature, and it's not only one of the great fantasy pictures but one of the great end-of-childhood elegies. The movie's political undercurrents run deep and strong, but del Toro isn't interested in ideological screeds -- in fact, he greatly distrusts blind ideology, as he has shown in earlier pictures like the resonant comic-book fable "Hellboy" and the astonishing "The Devil's Backbone" (set a few years earlier than, and in many ways a warm-up for, "Pan's Labyrinth," although the picture stands tall on its own).

"Pan's Labyrinth" works on so many levels that it seems to change shape even as you watch it. It is, at times, a joyless picture, and its pall of sadness can begin to weigh you down. But that's part of del Toro's intent, and of his technique. At one point the faun -- whose motives are never quite clear, either to us or to Ofelia -- expresses his displeasure with her, accusing her of being weak, of being only human. He tells her that, like others of her kind, she's destined to die: "All memory of you will fade in time."

That's a horrifying thing to hear, and not just when you're a child. But del Toro doesn't buy this cruel taunt, and with "Pan's Labyrinth" he disproves it. Memories are carried in myths and stories; that's one way they survive. All those dragons slain and stepparents defied: None of it has been in vain. If fairy tales were all simply pretty, they wouldn't have stuck with us, awake and asleep, for so many centuries.