The silencing of Anna

Russia's great journalist was gunned down by killers who may have been contracted to snuff out her investigation of government torture. 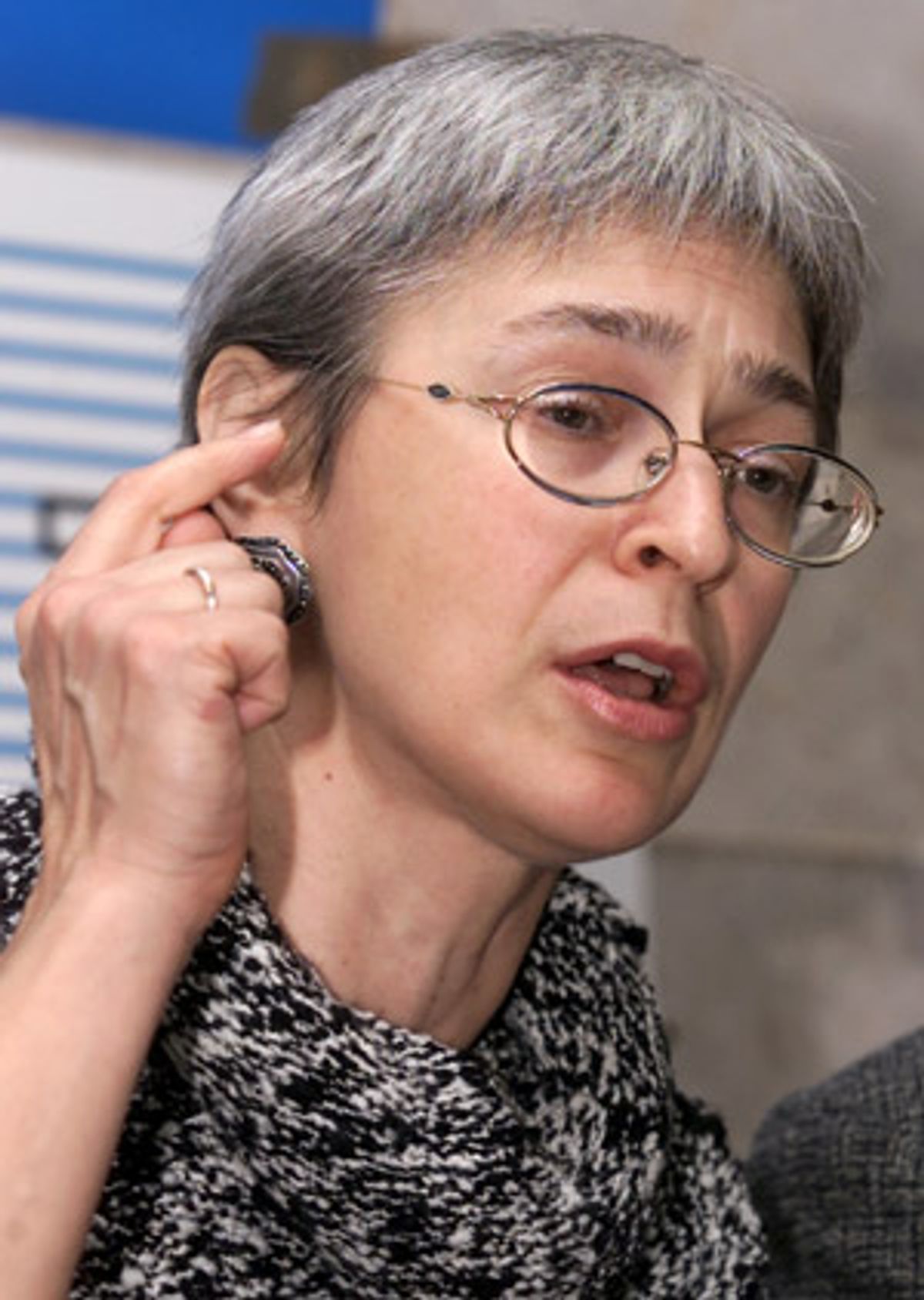 On the cold, grey afternoon of Oct. 7, a modest Lada car loaded with groceries pulled up outside a central Moscow apartment building. An elegant figure with steel-grey hair and large glasses emerged, shopping bags in hand. Anna Politkovskaya, Russia's most dogged investigative journalist, was facing a deadline and planning to finish her latest story by the next day. On her desk were photographs and notes about civilians who had been abducted by pro-Kremlin forces in Chechnya and tortured into confessing to crimes they had not committed.

Politkovskaya must not have noticed the thin man in dark clothes and the young woman who, according to surveillance tapes, had been following her in the supermarket. Her groceries were too much to carry all at once, so she brought a few bags to her apartment and took the elevator down to fetch the rest. When the elevator doors opened, the man from the supermarket was standing before her, a silencer-equipped IZH pistol in his hand. The first two shots hit Politkovskaya in the chest, the third in the shoulder. By the time her killer fired a final shot into her skull, Politkovskaya, 48, and a mother of two, was already dead. The pistol, its serial number filed off, was dropped next to her body.

Contract-style killings of prominent figures are hardly rare in Russia. Only a few weeks before Politkovskaya's murder, Andrei Kozlov, a Central Bank official who had spearheaded a crusade against money laundering, was also gunned down in Moscow. According to the Committee to Protect Journalists, Politkovskaya was the 13th reporter to be assassinated since President Vladimir Putin came to power.

Yet Politkovskaya's killing still came as a shock. She had seemed invincible, facing down repeated threats and surviving an alleged poisoning in 2004 to report on what she called Russia's "dirty war" in Chechnya. For years, she had courageously exposed human-rights abuses in Russia and particularly in the North Caucasus region that includes Chechnya, making frequent trips to the war-torn area. She wrote, often in harrowing detail, of topics that have become off-limits for nearly all other journalists in Russia and broke the biggest taboo of all by criticizing Putin himself. For her last, unfinished piece she'd been investigating the systematic torture of prisoners in what Russia has termed its own war on terror in Chechnya.

"She was incredibly brave. Much more brave than many, many machos in armored Jeeps surrounded by bodyguards," her newspaper, the biweekly Novaya Gazeta, wrote in a special issue published after her death. "She took any injustice, regardless of whom it involved, as a personal enemy."

For many of her colleagues, Politkovskaya's prior survival had served as inspiration -- evidence that despite increasing pressure on independent media by the Putin government, there was still some room in Russia for honest, critical reporting.

"There is almost no investigative journalism left in Russia and I think that a lot of people will be scared," Alexei Venediktov, the editor in chief of Ekho Moskvy, Russia's last independent radio station, told reporters outside Politkovskaya's funeral in Moscow on Tuesday. "Many of my colleagues will be afraid when entering their houses," he said. "They will constantly be looking over their shoulders." Venediktov had already overheard reporters in the corridors of his station saying they should steer clear of reporting on Chechnya.

Novaya Gazeta on Thursday printed an unfinished version of the story Politkovskaya had been working on the day she was killed. Like most of her work, it focused on human-rights abuses in Russia's southern province of Chechnya, where tens of thousands have died during two Kremlin campaigns to crush rebel separatists. The article described the alleged torture of a young Chechen man by security forces loyal to Ramzan Kadyrov, the pro-Kremlin prime minister of Chechnya. Kadyrov was a frequent target of Politkovskaya's work. She wrote in the piece that brutal torture was being widely used to extract false confessions from innocent civilians so that the pro-Moscow Chechen government could appear to be capturing rebel fighters. Kadyrov's forces, she said, were responsible for "a conveyor belt of organized confessions" aimed at "baking criminal cases like pancakes."

The story included written testimony from a Chechen man named Beslan Gadayev who had been extradited from Ukraine and handed over to law enforcement officers in the Chechen capital, Grozny. Asked whether he'd killed two men in Chechnya, Gadayev swore that he had not.

"They said 'Yes, you did kill them.' I denied it again and then they started beating me," Politkovskaya quoted him as saying. He was struck twice in the face, handcuffed and suspended from a pipe between two filing cabinets. "Then they attached wires to my little fingers," Gadayev continued. "In about two seconds I felt electrical shocks. At the same time, they were beating me all over with rubber truncheons. I couldn't stand it anymore and I started to scream, calling to God Almighty and begging them to stop. To shut me up they put a black plastic bag over my head." Despite repeated beatings that day, Gadayev refused to confess.

The following day, a plainclothes officer walked into his cell and said that journalists were waiting for him outside. "He said that I would have to confess to three murders and an armed robbery, otherwise they'd repeat the whole thing again and this time rape me as well. So I agreed," he said. "After my interview with the journalists they forced me, again threatening torture, to testify that all of my injuries from the beatings had been incurred when I tried to escape." Gadayev remained in a Chechen prison awaiting trial, Politkovskaya wrote.

Along with fragments of Politkovskaya's snuffed-out story, Novaya Gazeta published grainy photographs taken from video footage obtained by Politkovskaya that the paper said showed Chechen security forces beating two young men, apparently to death. The photos showed the head and torso of a man lying in a pool of blood, a man's face covered in blood and a body slumped over with a knife sticking from the side of its head. The pictures were accompanied by a transcript of the audio from the video, in which the men's torturers taunted their victims about how hard they were to kill.

The newspaper said Politkovskaya was planning a second report to accompany the video but was killed before she could write it. "It's a shame she wasn't able to finish everything she was working on. She was so committed to her job. No one will ever be able to replace her," said Vitaly Yaroshevsky, the paper's deputy editor.

As part of their investigation into her killing, police seized documents from Politkovskaya's home and office, as well as her computer, leaving her editors with no way of knowing how much work she'd left unfinished.

Born and raised in New York, where her Ukrainian parents were U.N. diplomats, Politkovskaya was a product of the Soviet elite. After the collapse of the Soviet Union she could have, like many of her generation, used her connections to build a comfortable lifestyle. Instead, she threw herself into independent journalism, ending up at Novaya Gazeta in 1999 -- just in time for the second Chechen war. By her own admission, she became obsessed with exposing the killings, torture and beatings of civilians by Russian soldiers in Chechnya. She wrote two books on the conflict, "A Dirty War: A Russian Reporter in Chechnya" and "A Small Corner of Hell: Dispatches From Chechnya."

She made no secret of her contempt for Kadyrov or for Putin, and critics in Russia frequently accused her of lacking objectivity. In "Putin's Russia," a highly critical political biography of the president published in 2004, she accused Putin of failing to shake off his past as a KGB agent in East Germany. "He persists in crushing liberty just as he did earlier in his career," she wrote in the book.

Politkovskaya won numerous international awards, but as she gained prominence abroad, she was increasingly marginalized at home. There was clearly an appetite for her kind of reporting -- in the last three years Novaya Gazeta's circulation has risen from 130,000 to 170,000 copies, according to staff at the paper. But in a country of 140 million spread across 11 time zones, the paper's impact was minimal. More than 80 percent of Russians get their news from national television networks -- all of which have come under Kremlin control in the past five years. Prominent national newspapers, such as the venerable daily Izvestia, have also been scooped up by state-controlled companies or businessmen with close links to the Kremlin. And in the state-friendly media, Politkovskaya was persona non grata.

"It's absurd. They'll only show her on television now that she's dead and can't say anything," said Oleg Panfilov, the head of Russia's Center for Extreme Journalism, a press-rights watchdog.

There has been no shortage of speculation about who might have wanted her dead. Novaya Gazeta, which is offering a reward of almost a million dollars for information about the shooting, has written that it believes her murder was either revenge by Kadyrov, or an attempt to discredit him. Kadyrov has denied any involvement, saying on state television: "I do not kill women and have never killed women."

Politkovskaya's name was also on numerous lists of "enemies of the state" published on the Internet by ultra-nationalists angered by her support of Chechens. The pro-Kremlin media have been pushing a theory that she was killed in an attempt by exiled enemies of Putin to discredit Russia internationally and provoke instability.

While calling Politkovskaya's killing "a crime of loathsome brutality," Putin himself has backed that hypothesis. "We have information, and it is reliable, that many people hiding from Russian justice have long been nurturing the idea of sacrificing somebody in order to create a wave of anti-Russian feeling in the world," Putin said on Tuesday during a trip to Germany.

According to Reuters, Putin had promised on Monday to "take every step to investigate objectively the tragic death" of Politkovskaya. A Kremlin spokesman said Putin made that promise in a telephone conversation with President Bush.

Few expect any of the theories of her death will ever be proven right or wrong, or that Politkovskaya's killers will be brought to justice. Of all the investigations into high-profile slayings of Russian journalists in recent years, not one has resulted in a conviction.

"The Russian legal system has so far not been capable of dealing with these cases," said Richard Behar, a New York journalist who leads Project Klebnikov, an alliance of reporters investigating the July 2004 murder in Moscow of Paul Klebnikov, the American-born editor of the Russian edition of Forbes. Two ethnic Chechens accused of carrying out Klebnikov's murder were acquitted earlier this year and the official investigation into his killing has stalled.

Michael Mainville is a freelance writer based in Moscow.