From Borges to Bruce Chatwin, the rich and moody literature of South America's most European nation reflects its homeland's squandered potential. 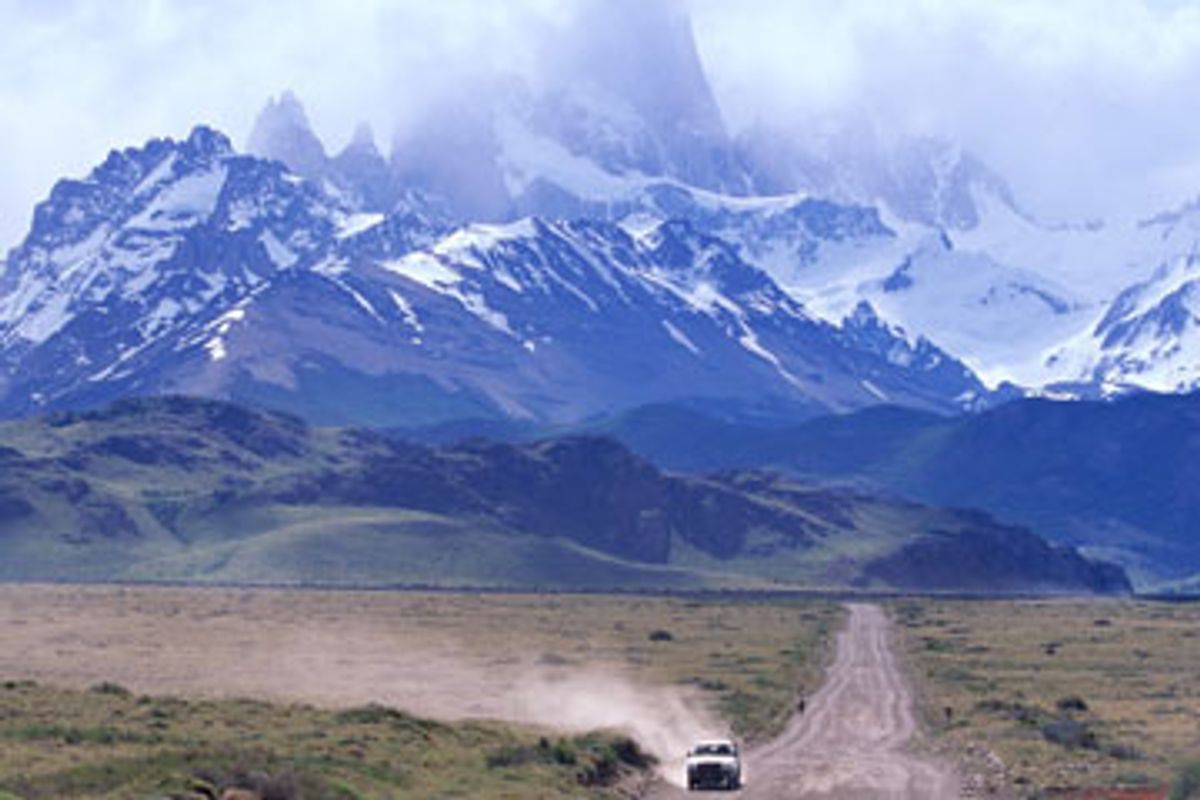 Bruce Chatwin, writing in "In Patagonia" (1977), his great travel book about the remote tip of the Americas divided along the Andes between Argentina and Chile, tells the story of a French farm boy who took it into his head to become king of the Araucanian Indians. In 1859, at the age of 33, Orelie-Antoine de Tounens set out for Patagonia, where, after a short parley with the Araucanians, he proclaimed his kingdom and unfurled a tricolor. Not long after, his majesty was arrested by the Chilean police, imprisoned, and then deported, a sequence of events that would be repeated in Argentina. He died a pauper back in France, where the imaginary crown was handed down at least into the 1970s. According to Chatwin, when Orelie-Antoine's immediate successor tried to get the Vatican to recognize his realm, a South American prelate said, "This kingdom exists only in the minds of drunken idiots."

The comment was made by a Chilean, but the story illustrates in tragicomic form the serious and abiding Argentine fear: that the graft will not take, that grandiose imported hopes will only collapse and decay in this newest-seeming part of the new world. The pathos of Argentina, after all, is that it might have had everything. Its endless fertile plains, the pampas, were opened up for cultivation in the 1880s by the Conquest of the Desert, a genocidal land grab parallel to the American campaign against the Plains Indians. The emptied land wanted workers, and before long Argentina -- wrested from the Spanish and declared a republic in 1816 -- had attracted many poor immigrants from Italy and northern Spain, along with Jews and gentiles from Ukraine, Poland and Germany, as well as Welsh, Irish and Japanese. By World War I, exports of wheat and cattle had made Argentina one of the wealthiest countries in the world, as the glorious Belle Ipoque architecture of Buenos Aires still testifies.

But, as V. S. Naipaul wrote in a half-insightful, half-prejudiced 90-page sketch of the country (included in "The Writer and the World," 2002), "The elegance did not last." The Argentine 20th century was a long economic slide punctuated by spasms of dictatorship. The country remains wealthy in comparison to its neighbors and as literate as our own, and its food, land and extraordinarily handsome people are nothing short of spectacular. But the feeling of what might have been hangs over Argentina. Each new effort at democracy, prosperity and hope seems threatened by a reversion to frontier lawlessness, poverty and emptiness. And perhaps the uncertainty of tomorrow even explains the Argentine penchant for staying out till dawn.

There is something about the country that all writers tend to describe in much the same way. For Chatwin, it's the avenues of Buenos Aires "giving the illusion of endless space and leading out into nowhere." For Naipaul, there is the "meaningless flat land" of the pampas, "the atmosphere of freedom and fantasy which the emptiness of Argentina can so agreeably suggest to people who have just arrived." Argentines feel it too. For Jorge Luis Borges, indisputably the country's greatest writer, even the teeming capital city was vacant -- "In Buenos Aires nothing has yet happened" -- hence the need for it to be "settled by some symbol." Cisar Aira, one of the most interesting living Argentine writers, writes in "An Episode in the Life of a Landscape Painter" (2000) of "expanses resonant with emptiness," and treats the theme in a new way. Aira recognizes at whose expense -- the Indians' -- the emptiness was created. As a parable of mere description in the service of colonization, this frightening novella is one that Edward Said might have admired.

Borges himself is rarely so explicit. Indeed, the brilliant if somewhat dry and cold essays/fables that won him his fame can be so abstract that we overlook his argentinidad. Edwin Williamson's "Borges: A Life" (2004) ought to change that, being as thorough and suggestive a political portrait as it is a psychological one. Williamson is as good on Borges' cultural politics (he hoped that the separate nationalities flowing into Argentina might combine into "a new man") and his opposition to Peronism ("our vernacular imitation of fascism") as on his miserably unfulfilled love life. You begin to see the labyrinths and libraries of Borges' fiction and poetry as so many structures erected against the political cruelty and cultural emptiness of his country.

Since Borges' long life (1899-1986) coincided with Argentina's rise to fantastic wealth and long, wracking decline, Williamson's biography can also function as a history book. Not by itself, however: Williamson somehow refers to the Dirty War prosecuted by the ruling junta between 1976 and 1983 as "the war against the guerillas." There were perhaps 400 leftist guerrillas at the time of the coup; the remainder of the 20,000 or 30,000 people tortured and killed by their government were unionists, factory workers, campesinos, teachers, student council leaders, psychologists and their inconvenient spouses and children. Marguerite Feitlowitz's "A Lexicon of Terror" (1998) offers an appalling anatomy of one of the most sordid regimes in the history of the Western Hemisphere. Reading it, one is yet more intrigued by the nightmare Borges reported having had on April 10, 1977. In his poem "The Leaves of the Cypress," Borges dreams of being kidnapped in the middle of the night by a man intent on murder, just as no doubt happened in the waking lives of some of his neighbors as he slept.

Borges (who later chose to die in Geneva at least partly for political reasons) never wrote anything approaching a novel in length. The best-known Argentine novels are "Hopscotch" by Julio Cortazar (who died in exile in Paris), and "The Kiss of the Spider Woman" by Manuel Puig (who died in exile in New York). "Hopscotch" (1966) has not aged gracefully: With its rhapsodic conversations, allegedly jazzlike prose and bohemian cast of characters, it seems like the work of a sort of superior Kerouac. "The Kiss of the Spider Woman" (1974) is something else. Two Argentine cellmates, the one guilty of homosexuality, the other of Marxism, talk about movies and revolution, and, between sessions of torture at the hands of the police, fall in love. In its combination of political commitment and pop-cultural dizziness, in the terrible pain that it describes and the great pleasure that it gives, this is the novel that half the writers living in Brooklyn, N.Y., today have always longed to write.

Juan Josi Saer (who died last year in Paris) is not as well-known as Cortazar or Puig, but he deserves to be mentioned in their company. His fine novel "The Event" (1988) concerns the efforts of an Italian immigrant -- a rancher and magician -- to do two things: make a fortune on the pampas, and prove the truth of his metaphysical conviction that mind can command matter, that the visible world is the least and flimsiest aspect of reality. The force of the novel is to show how this conviction is done in by obdurate Argentina, especially the implacable landscape of the pampas. In a magnificent passage, Saer describes "the precarious settlements that were forming on the flat surface of the oldest land in the world, covered by the sediment of continents and of extinct species and pulverized by time and harsh weather, that unreal and empty space that the conquistadors took special care to avoid but that, the Indians first, then later cows and horses, and shortly thereafter adventurers, soldiers and landowners, and then later still the disinherited of the whole world who had arrived in overcrowded ships, stubbornly persisted in crossing again and again, gray, hallucinated figures, leaving fleeting traces that the strong winds and the rain undertook almost immediately to efface."

And this sense of an Argentina constantly delivered, against its will, into the desolation of reality may also do something to explain why the most moving lines in Borges' poetry are always those uncharacteristic ones in which the imagination fails and the elaborate structures collapse. To a would-be lover he writes: "I can give you my loneliness, my darkness, the hunger of my heart; I am trying to bribe you with uncertainty, with danger, with defeat." To himself he says: "And I don't know how time can pass/ I who am time, and blood, and pain." And when at last he goes blind, as his father before him did, he says: "Soon I will know who I am."

Benjamin Kunkel is the author of "Indecision," a novel, and an editor of n+1 magazine.

Books Latin America The Literary Guide To The World