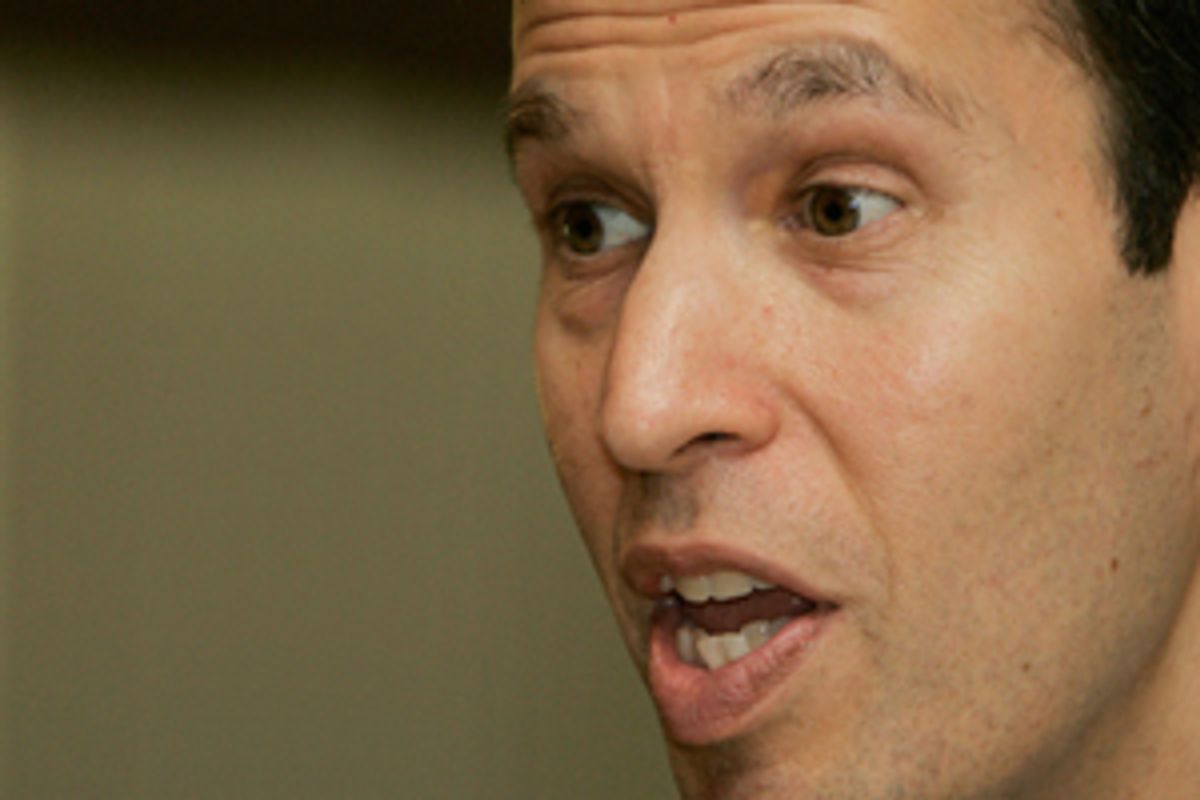 Ken Mehlman, head of the Republican Party, insists he doesn't have a Jack Abramoff problem. "Everything I did was above board and consistent with the rules," Mehlman told reporters this month about his work in the White House during President Bush's first term, when the now-disgraced super-lobbyist was hustling Washington. In fact, the Republican National Committee chairman likes to insinuate that Jack Abramoff never made much of an impression on him at all. He might have met with Abramoff or his lieutenants, Mehlman conceded to Fox News recently, but "I don't recall the specifics or the meetings."

But maybe Ken Mehlman does have an Abramoff problem. On Sept. 29, the very day the Foleygate scandal broke and sucked up most of the media oxygen, the House Committee on Government Reform released a bipartisan report on the contacts between the White House and Abramoff. The 91-page report lists 17 different Abramoff lobbying efforts directed at the White House Office of Political Affairs when Mehlman was that office's director from 2001 to 2003. But the most revealing story about Mehlman is told by the hundreds of pages of e-mails in the appendices of the report.

The e-mails show that Mehlman was not only familiar with Abramoff, but might have been his go-to man within the White House. "Everyone would appreciate it if you would contact Ken only and not others here at the WH," reads one message to Abramoff from Bush advisor Karl Rove's assistant Susan Ralston, "because they just forward it to him anyway." And a comparison of the timing of specific e-mails with the timing of specific checks written by Abramoff clients suggests what Abramoff was expected to deliver in return.

More than once, Abramoff asks for a favor, Mehlman fulfills the request, and then one of Abramoff's wealthy Indian tribe clients sends a political donation to a GOP cause. In return for a favor, Abramoff seems to have helped Mehlman with his own special project, a tight, scandal-marred Senate race in New Hampshire. On one occasion, Mehlman even appears to have arranged for the firing of a particular federal employee at Abramoff's request.

"Mehlman was clearly doing Abramoff's bidding," Melanie Sloan, executive director of Citizens for Responsibility and Ethics in Washington, noted after reading the report. She says these latest revelations "strongly suggest that Mehlman ought to be under investigation for accepting bribes just like members of Congress are."

For example, the Mississippi Band of Choctaw, an Abramoff client, wanted the Department of Justice to release $16.3 million in taxpayer money to the tribe for the construction of a jail on their reservation. But the tribe didn't need a jail. It already had a facility, which, unlike many other Indian jails, was neither overcrowded nor understaffed, according to a July 2000 Bureau of Justice Statistics report. In an e-mail exchange from late 2001, Abramoff deputy Tony Rudy appears to be arranging a series of donations from the Choctaws in return for the money to build the new jail.

In a Nov. 8, 2001, e-mail to Abramoff, Rudy said he would meet with Mehlman and ask Mehlman to "have the people who administer the tribal justice account release the money" to the tribe. Rudy added that he would bring "the list of dollars that they give."

The next day, Nov. 9, Rudy e-mailed Abramoff with the results of the meeting. "Mehlman," wrote Rudy, "said he would 'take care of this.' He was a rock star." Abramoff seconded Rudy's enthusiasm for Mehlman, firing back an e-mail that gushes, "He's great."

The day after that, Nov. 10, Abramoff e-mailed his lobbying team with an update on the project. "Ken Mehlman, the Deputy Political Director at the Bush White House, promised to begin a campaign immediately to get Justice to release some of [the] Fiscal Year 2001 money." He added that to "turn the screws further" the tribe should hand out "another round of donations."

Three days later, on Nov. 13, Rudy e-mailed Abramoff with a "new end-of-year giving list of the Choctaws." The list included $100,000 in donations to Republicans and conservative causes, including $20,000 split between the Republican National Committee and another political action committee. Rudy's e-mail included a note about that $20,000: "Let's give the check to Ken Mehlman at the White House." By February 2002, the Justice Department had released the $16.3 million to the Choctaws for the prison.

The e-mail trail also raises the possibility that Abramoff and Mehlman were doing a little horse-trading in 2002, during the run-up to the midterm election. Four years ago, Mehlman took a special interest in the contest for an open senate seat in New Hampshire, where GOP scion John Sununu was locked in a tight race with popular Democratic Gov. Jean Shaheen. White House phone logs show a heavy volume of calls between Mehlman's office and New Hampshire Republican operatives. Abramoff, meanwhile, was trying to get help for three contacts who were running for various offices as Republicans in the American possession of Guam.

On Oct. 9, 2002, Abramoff e-mailed Mehlman to request help for his clients. He wanted an official statement from President Bush endorsing the candidates. "Can we get a statement from the president," Abramoff wrote, "or -- I am probably asking for too much! -- a recorded something they can play in their ads?"

The next day, Oct. 10, 2002, the Mississippi Choctaws wrote a check for $10,000 to the New Hampshire Republican Party. On Oct. 23, one of Mehlman's employees sent Abramoff the Bush endorsement he had requested. The e-mailed statement says that Abramoff's three friends would "bring the promise of a new confidence and new prosperity to the island of Guam."

Kathy Sullivan, chairwoman of the New Hampshire Democratic Party, thinks Abramoff may have arranged for the $10,000 New Hampshire check to help get that Guam quote from Mehlman. "Somebody must have said to Abramoff, 'Can you get the money from the tribes to New Hampshire?'" Sullivan explained. "It would have made sense that it was Mehlman."

She also believes that the Choctaw money may have helped fund a $15,000 scheme by New Hampshire Republicans to jam Democrats' get-out-the-vote telephone lines on Election Day. Three Republican operatives have already been found guilty of criminal charges related to the phone-jamming scheme. Sununu, Mehlman's candidate, beat Shaheen by 20,000 votes.

Ken Mehlman declined to be interviewed for this article. Tracey Schmitt, a spokeswoman at the Republican National Committee, which Mehlman now heads, cautioned that any claims made in e-mails by members of Team Abramoff should be taken with a grain of salt. Abramoff has pleaded guilty to federal charges of fraud, tax evasion and conspiracy, while Rudy has pleaded guilty to conspiracy and conflict of interest. "Statements from known liars inflating their minimal contacts with Mehlman in an effort to magnify their own profile should not be a surprise," Schmitt warned.

Schmitt thinks the e-mail traffic, rather than showing any untoward influence peddling, mostly reflects Mehlman doing what White House political directors do. "In his capacity as political director at the White House, it was not unusual for Mr. Mehlman to have been in contact with supporters who had an interest in administration policy," she explained.

But the e-mail traffic seems to show that Mehlman was in contact with Team Abramoff not just about policy, but also about personnel. E-mails indicate Mehlman may have played a role in getting a veteran government employee fired.

In early 2001, Abramoff sought to eliminate an old adversary, Allen Stayman, a special negotiator at the State Department and a Clinton administration holdover. In the 1990s, Stayman had pushed for labor reforms for the Commonwealth of the Northern Mariana Islands -- reforms the government of the islands, as Abramoff's client, had paid Abramoff good money to scuttle.

In a series of rapid-fire e-mails on Jan. 29, 2001, from Rudy to Kevin Ring, another lobbyist in the Abramoff operation, Rudy explained that, "We need to get the background material on Stayman to Ken Mehlman ... He said he would kill him ... Mehlman said he would get him fired." Stayman, in the end, was dismissed from his State Department job.

In a telephone interview from his home in Maryland, Stayman said his State Department superiors put up a fight to keep him because of his negotiating expertise. "I had the full support of the State Department. I had been doing a good job and they wanted to see it through," Stayman recalled. But he says he learned through Republican sources that Abramoff was demanding his head. Ultimately, the political pressure was too great. "I'm sure that if Abramoff had not put in the call, I would have been fine."

Stayman said after reading the House report on connections between Abramoff and the White House, he was struck with Abramoff's access to Mehlman. "To get to Mehlman and get Mehlman to make a phone call," noted Stayman, "takes a lot of horsepower."