"The Uses of Enchantment"

In her multifold new novel, Heidi Julavits sends up self-help and female victimhood through the story of a girl who may have faked her own kidnapping. 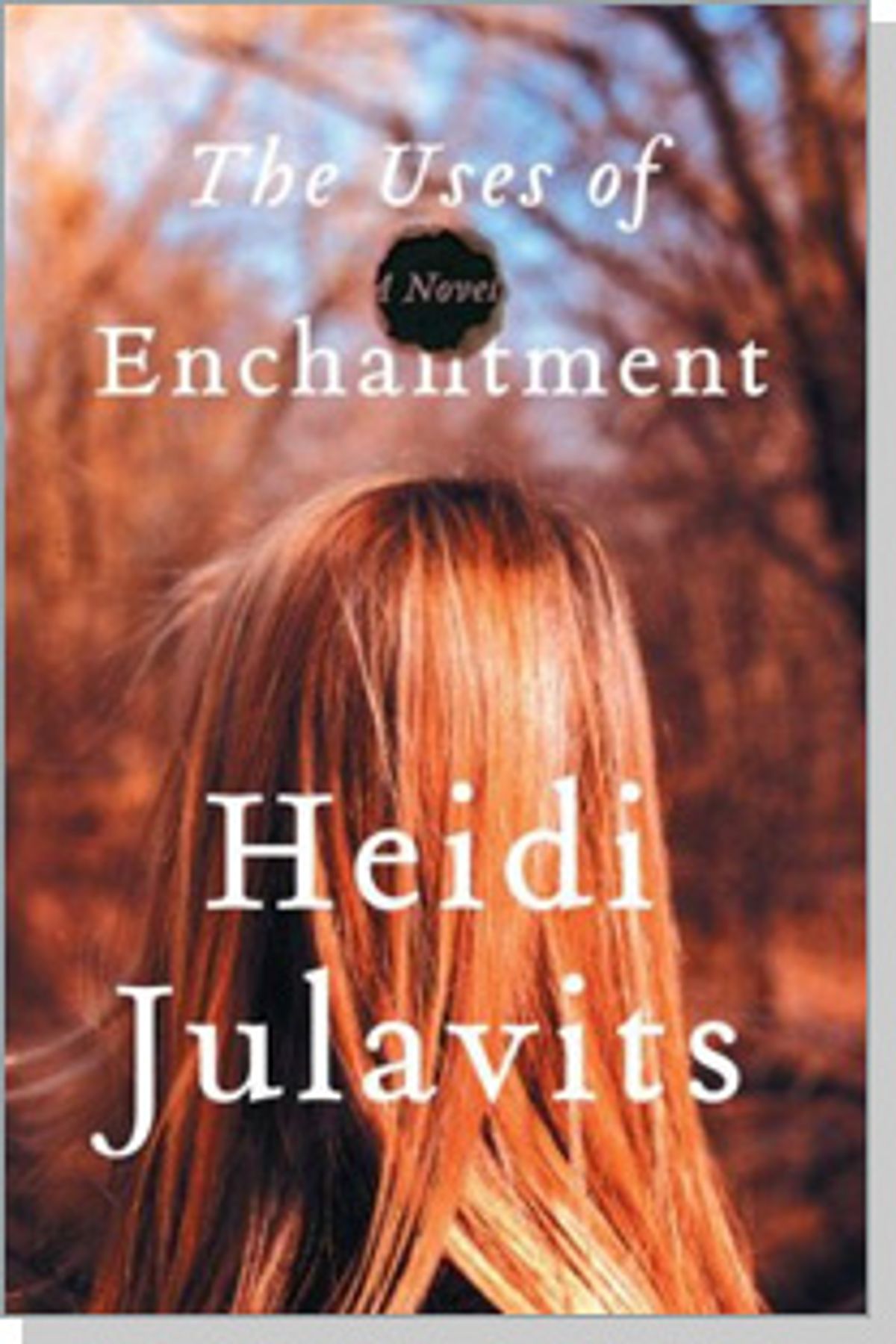 About midway through Heidi Julavits' latest novel, "The Uses of Enchantment," a character declares, "girls, mishandled, are a menace." It's both funny and disturbing that this sentiment comes from an elderly private school headmistress, Miss Pym, who for generations has been charged with the business of educating upstanding young ladies at Semmering Academy in West Salem, Mass. It's doubly ironic that she's telling this to Mary Veal, an infamous alumna whose alleged kidnapping and its aftermath have her pegged as both mishandled and a menace.

In 1985, Mary was a 16-year-old student at Semmering, distinguished only after she asks to be excused from a rained-out field hockey game and, kilt and all, gets into the Mercedes of a strange man -- "the kind who watched while pretending to sit in his car reading a newspaper." Mary reappears at school a month and a half later, claiming to have no memory of what happened.

We're left to cobble together Mary's story, told Rashomon-style through three different and alternating narratives: There are the chapters simply titled "what might have happened," which are a kind of murkier play on "Lolita" that imagines what transpired during her abduction, told by an omniscient narrator; another is set immediately after her return and unfolds through the notes of Dr. Hammer, Mary's fame-hungry psychiatrist; and the last by the grown-up Mary herself, who returns to Massachusetts from her adopted home of Oregon in 1999 after the death of her mother, Paula.

It's no help to family relations that Paula's funeral occurs 14 years to the day after Mary's kidnapping and that the incident figures heavily in the obituary. Her homecoming is met with indifference from her golf-obsessed father and outright hostility from her older sisters, Regina (an untalented poet with a string of failed engagements) and Gaby (a stoner lesbian), both of whom never want Mary to forget that their icy social-climber mom (who was said to live on "white wine and pickles") never forgave her for tarnishing the family name.

Mary isn't known merely as the poor girl who was kidnapped in high school. Instead, the entire incident was memorialized in "Miriam: The Disappearance of a New England Girl," a case study written by Dr. Hammer claiming that Mary faked the abduction. Her name is changed ostensibly to protect her, but her true identity appears to be the worst-kept secret in the Northeast. In Mary, the ambitious and bumbling therapist finds the perfect vessel for his theory of adolescent disorder, Hyper Radiance, which is the alleged need for repressed girls from repressive cultures "to 'magnify' themselves as the victims of spells and devilry at the very moment they come of sexual age."

Mary's mother signs off on the project, reasoning that she would rather have a daughter known as a liar than as damaged goods. It's no help that Abigail Lake, a woman who was hanged for witchcraft in the 17th century, is a distant relative of Paula's and forever a thorn in her Fair Isle sweater-clad side. Paula's pet project was to clear her name. She was never successful and in Mary she sees the possibility of exerting a little control over another family member's legacy.

Witches are a recurring, if unseen, presence throughout the book, where girls are invariably described as "bewitching" and two old crones who run a day-care center are awaiting trial for not just abusing toddlers, but "riding around on broomsticks." A publisher tells Dr. Hammer that his book will do well because "witches are a nice touch. Witches sell second only to Nazis" and "in terms of death, burning women sell second only to suicides."

Hysterical women must sell as well, because they loom large over the narrative: There's the teenage Mary's favorite book, "The Abduction and Captivity of Dorcas Hobbs by the Malygnant Savages of the Kenebec," a colonial-era tale whose 60-plus-word subtitle about how an "Innocent Young Girl Tastd Sine and Dancd with the Devill" she commits to memory; and every Semmering student must participate in a rite of passage called the Wronged Woman project where prep schoolers are encouraged to campaign on behalf of unjustly accused women. This is an exercise done in the hope that the student "will discover within herself a wronged woman whom she herself has the power to exonerate." Mary's classmates went for wrongly imprisoned baby sitters, but a month before her disappearance, Mary chooses the titular patient from Sigmund Freud's "Dora: An Analysis of a Case of Hysteria," earning her a failing grade. And then there's Bettina Spencer, another Semmering girl who faked her abduction years before Mary.

The nature of victimhood is something Julavits, who's a founding editor of the Believer, delights in not only exploring, but skewering. Semmering has a mural depicting women being chased by natives and tied to the stakes, "the clouds above the heads of the soon-to-be-scalped-or-burned women transformed, with a little squinting or very little imagination, into faces that surveyed the scene with expressions commonly interpreted as enthusiasm." The official title is "The Disappearing Women," but it's commonly known around campus as "The Grin and Bear It Mural."

Sometimes "Enchantment" reads as a send-up of the abused woman novel. Characters sip a soothing herbal blend called grief tea, attend the "encounter group" Radcliffe Women Against Needless Domestic Abuse (called RWANDA for short), and read a popular self-help book aimed at the upper middle class titled "Trampled Ivy: How Abusive Marriages Happen to Smart Women." There's even mention of a woman who suffered a breakdown and is said to have deprived herself of happiness until she "reclaimed her story and signed her name to it." It's a dry humor that's much needed in a book whose underlying subject matter -- kidnapping, lying, sexuality, victimhood, being universally misunderstood -- is uncomfortable stuff. But as funny as these asides are, they also come off a little bit snotty and arch in a book that prizes style over plot.

Julavits seems to be saying that, in their aptitude for manipulation, adolescent girls both hold all the power and are victims of their own desires. It's a conservative view and one that doesn't give much room for the gray area that most teenagers live in. It's unfortunate that in a novel driven by the central question of whose story it is to tell -- and one that allows so many voices to tell the story -- the only one missing is 16-year-old Mary's.

But for all her scoffing at the culture of self-help, Julavits still gives Mary a chance at reclamation. Even though she has moved as far away, physically, as she can from her childhood -- even becoming the kind of newly minted West Coast resident who eats lunch every day at a vegan bakery -- she's still reliving her past, employed at a private girls school in Oregon, seduced by the familiar display of adolescent girls and their high-strung mothers. Prep school is not just a place where she can watch firsthand the hysterics of teen girls; it is where Mary is free to imagine that she'd been "sucked back to a crucial crossroads in her own life and offered a second chance."