Back to the mothership

Spock's bride, T'Pring, has conjured fantasies for Trekkies for decades. Imagine their surprise when I tell them she's my mother. 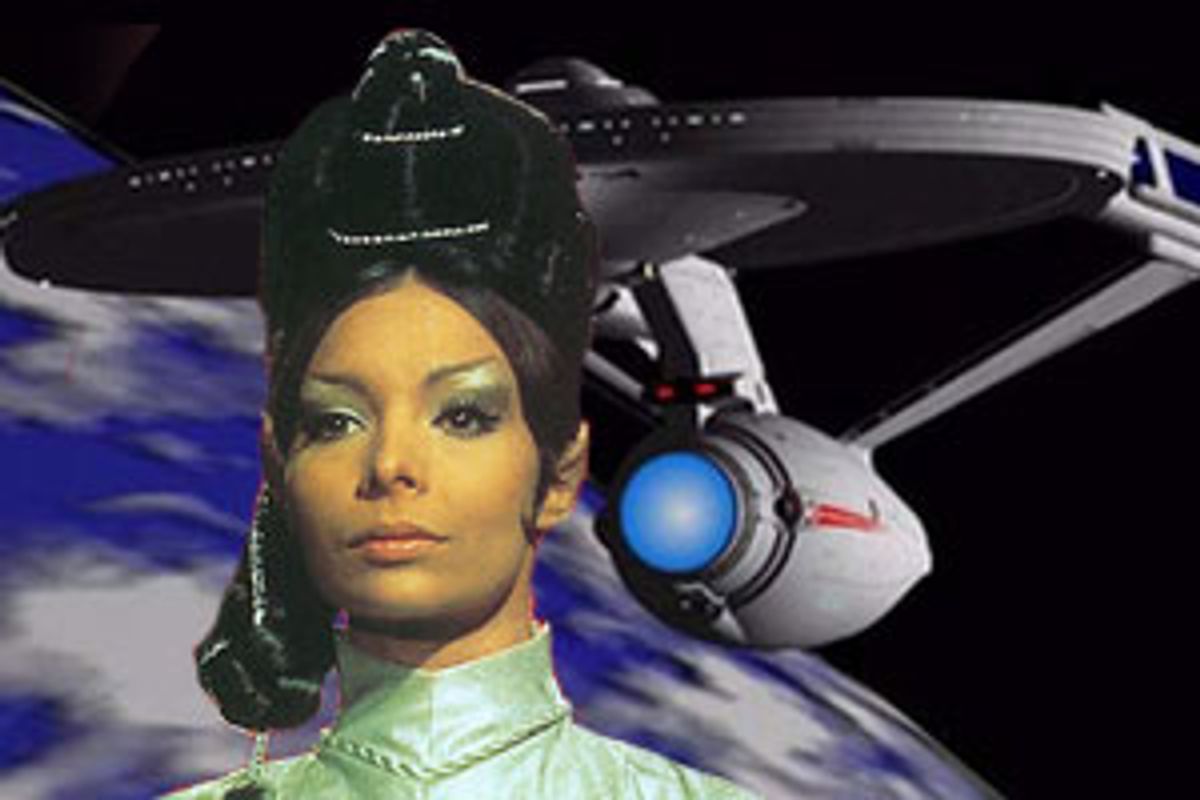 On my dresser is a photograph of me at a "Star Trek" convention at age 4. I'm signing an autograph for a woman in go-go boots. I've never signed another autograph since then. It's hard when you peak at 4. In the '70s, my mother was riding the crest of popularity as T'Pring, bride of Spock. My parents had just divorced, so my mother was eager to engage us in "immersive experiences." Aside from nude beaches and est, they included "Star Trek" conventions. In those days, conventions were marked by a strange confluence of pioneering geeks and residual free love. Now, those geeks run billion-dollar corporations.

It's been more than 30 years since that photo was taken. And just as long since I've been to a "Star Trek" convention. To celebrate the 40th anniversary of the series this fall, I wanted to go with my mother, who now earns an income from signing TV stills of herself at these events.

The gala convention of the year was at the Las Vegas Hilton. It's an appropriate venue considering the hotel already offers "Star Trek: The Experience," where guests battle the Borg and play slots while getting drunk at Quark's Bar & Grill. The Vegas convention attracts people from 38 countries and every state in the union.

I've never truly understood why my mother's character tugs so viscerally on her fans. I'm also curious where this type of fame sits for Mom, who still yearns for greater glories. For me, her role has been a conversation ice-breaker, a kitschy factoid and a nuclear option for when I'm in trouble.

My mother, Arlene Martel, began her career at 18 on Broadway where she starred in "Uncle Willie" with Norman Fell (who later played Mr. Roeper on "Three's Company"). An affair with James Dean ensued, a marriage to an actor, a few thrown plates, another marriage to another actor, and in 1969, my birth and the role that would change her life: T'Pring in "Star Trek's" "Amok Time."

In "Amok Time," Captain Kirk discovers that Spock's on a mating cycle and is basically suffering from Vulcan PMS (he flings a bowl of Vulcan soup at a nurse). The USS Enterprise lands on Vulcan to assuage Spock and they discover their senior officer has an arranged bride. My mom. And she doesn't really dig Spock. She digs another Vulcan named Stonn. To avoid having to marry Spock, she chooses Captain Kirk as Spock's opponent in the combat ritual for the right to her hand. Knowing that win or lose she'd get to be with Stonn, Mom displays a shrewd logic. Spock has apparently killed Captain Kirk and everyone's solemn and sad. However, it turns out that the wily Dr. McCoy just shot Kirk up with a neuroparalyzer halfway through the battle. In the end, Mom reveals to Spock why she chose Kirk instead of Stonn. She elicits a humbling "that's flawlessly logical" compliment from the famous Vulcan, who, in a rare display of emotion, is happy to discover that Kirk is still alive upon his return to the Enterprise.

At the convention, I make my way past flocks of Borgs, a few gothic introverts and a slew of Kirk look-alikes in varying degrees of obesity. I find the "celebrity" signing room. For the most part, the room has pockets of hardcore fans, including a high density of paraplegics clutching memorabilia. Some of the actors wait at their table full of photos like whores on display in a red light district. There's Felix Silla, a midget who played Twiki on "Buck Rogers," his feet dangling whimsically from the chair. There's Celeste Yarnall, a former "Star Trek" babe who once dated Elvis and now writes books about holistic pet care. There's Grace Lee Whitney, a woman who published a libidinous memoir about whom she shagged and the spiritual aftermath. It seems that anyone who has even remote ties to the show has a table full of photos and a cash box. But mostly these are actors who would be working if they could get a job.

My mother is in the corner reading Deepak Chopra. I overhear two Captain Picards debate whether my mom was the Denise Richards of her day as they flip through old photos of her in a bikini. While I vacillate between discomfort and pride, I notice her table is teeming with eccentricity. There's a Stephen Hawking look-alike at her side mumbling something about priapism. On her other side sits Pandora, a former Air Force intelligence officer, now a 6-foot transgendered blond with real breasts and a phaser. She's in a mauve sateen dress and is flanked by two blue wings.

"Sure is," she says with a husky baritone and moves it so I can sit.

My mother reaches over and hugs me.

"This is my son Jod, everyone. Jod is a fantastic poet."

Her table of minions all smile.

"I was just talking to Pandora about writing a book because she's had such an incredible life -- and still does. I thought it would be very important to write a book about her. You could collaborate with her, Jod. Don't you think?"

My mother has a unique way of making everything seem incandescent. When this happens, I'm often put on the spot to join the endeavor or risk being labeled "resistant." If I say no, she will express her despair at another of my lost opportunities to change the world.

A redheaded women walks over to me and rubs highly concentrated peppermint oil on my clavicle. "It has the equivalent of 36 cups of peppermint tea," she says.

"Peppermint oil is a wonderful tonic. It helps with elimination. Your mother tells me you have trouble with your bowels?"

"No more than the next guy."

"You know, elimination issues often have a lot to do with holding on to unprocessed emotions."

The graying paraplegic by her side introduces himself to me as the man who conceived of the mathematical formula behind Excel spreadsheets. "You have a huge aura," he says.

"Yes, I read auras. Most people have a thin cord of energy; yours is thick and red, almost superfluous."

My girlfriend, who'd never been to a convention, now joins us after finding refuge in a hot dog. He tells her, "You are very lucky to be with a man who has an aura of this type."

If you're a "Star Trek" agnostic, like I am, all you can say in these situations is "thanks"; the true agnostic just thanks people for their input, then privately envies their absolutism.

After a few moments of calm, a middle-aged man waddles up to the table in cargo shorts and a shabby T-shirt. He says he's a psychic from Chicago. My mother greets him as if she's known him for decades, but of course they just met. After some pleasantries he declares, "I'm one of the foremost speakers in America right now." My girlfriend and I wait in vain for him to elaborate. My mom asks him to perform a "love test" on my girlfriend and me. Before he can respond, she leans over to us and whispers, "He usually charges $500 for this." Not being sure what a "love test" might involve, I visually frisk him to ensure this doesn't involve a catheter and/or the wanton loss of semen. Because we are hung over and put on the spot, we relent. After a series of questions such as "Are you cold and selfish or sensuous and romantic?" he then tells us to pick various numbers. The results are that we both have very low self-esteem because we "keep looking at each other," that I'm humorless, and that my girlfriend is not really in love with me. It was the saddest psychic reading I've never asked for (except for the one in which I die abroad from gout).

While this advice is being dispensed, he continues to hard sell us his book on numerology and the soul. I ask him what he thinks of "Star Trek" conventions. "I think it's sad," he says. "You see these actors hanging on to their celebrity when they should just pack it up." I realize the cult of personality my mother wields may not have anything to do with playing T'Pring, as she has always intrinsically drawn in the eccentric. Her fame is not what makes her interesting; it makes me interesting.

With my breathing clipped by the power of the peppermint oil we decide to walk around a bit and take in the sights. We make our way past phaser replicas, dolls of Uhura and an entire family of tribbles to the International Federation of Trekkers, the only official fan club of the show. The federation devotes all its activities to charity and claims the creator's son, Gene Roddenberry Jr., as one of its members. The members are called cadets and they operate within a "chain of command."

I ask a friendly cadet named Juanita about the difference between a "Trekkie" and a "Trekker." She explains, "A Trekkie is someone who just watches the show. A Trekker is someone who lives the dream."

She thinks about this long and hard. "The dream is to meet new beings, make nice and try to make some friends."

In the end, a Trekker believes in the basic goodwill of the universe. In a world of mixed messages and hyper-contradictions, most people are searching for an ideology that simply tells them to be kind to others. When you consider the Byzantine rules of the world's major religions, the Trekkers may be on to something. Though in some sense, it seems sad that there's such a dearth of inspiration for how to be kind that people have to turn to "Star Trek" reruns.

I find my mom back at her table full of photos. The crowds have thinned out. The midget is sleeping at his table. My mother is despondent after a tussle with a fellow actor about the splitting of profits. She calls her a "schmata." I wonder how long she can do this. She always spoke of her vision of accepting an Academy Award. I ask her if she still dreams of getting one.

"Absolutely. And I believe it will happen," she says.

And I know it's her faith I admire a thousand times more than her TV fame. But I worry about her the way any son worries about a mother without a secure livelihood. She doesn't seem worried. An actor has to have something different about them to survive. Is it delusional self-entitlement? Or just inexorable human will?

A woman approaches the table with her folksy father. He's blushing and quiet.

"Well, I just want to tell you that you sure are pretty."

My mother smiles and says, "Thanks. I feel pretty."

Jod Kaftan is a freelance writer based in Los Angeles.