While the current political shifts among evangelicals should make progressives happy, the religious right isn't going to give up its control of the GOP agenda. 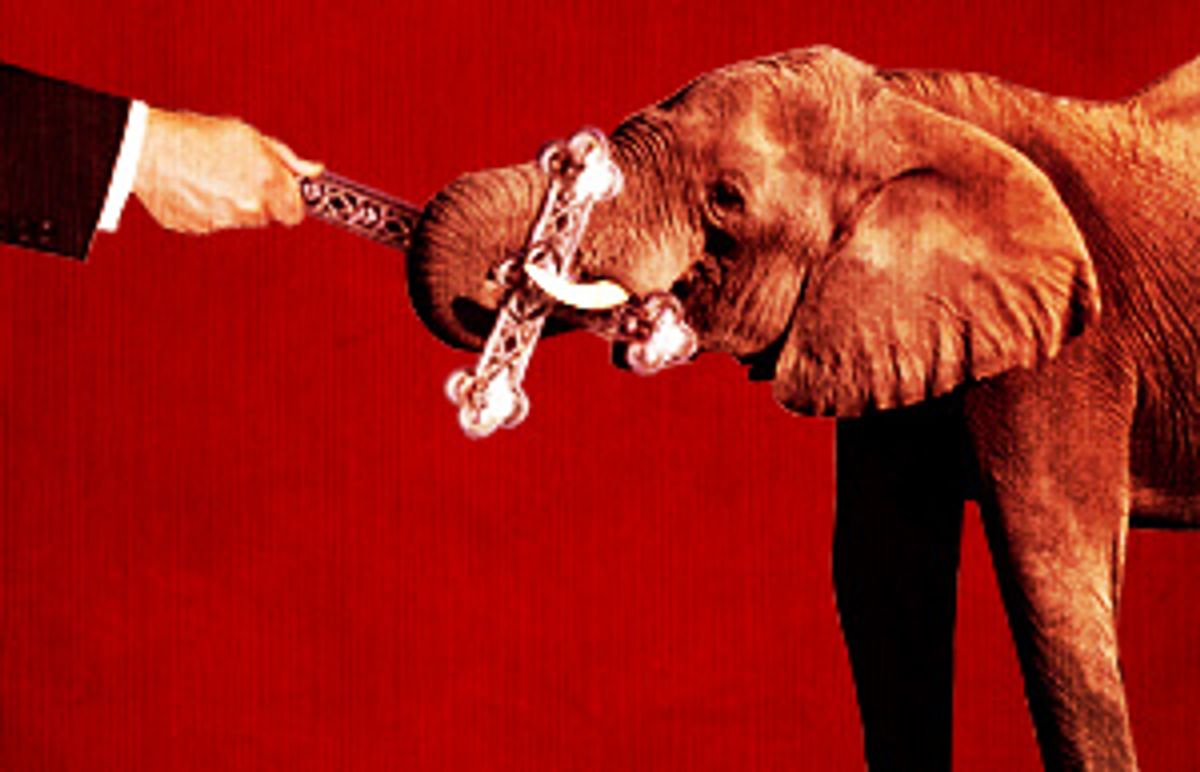 In these final days before the expected Republican apocalypse, the signs and portents of political dissension among the nation's evangelical Christians are unmistakable. From the right, the usual voices of the religious right warn darkly that their restive flocks may resist the GOP call to the polls. From the center and left, newer voices of faith urge Christians to turn away from narrow partisanship toward a broader agenda. Pastors dare to question the corporate conservative orthodoxy on climate change, concern for the poor, the war in Iraq and even the divine inspiration of George W. Bush.

Cracks in the right-wing fundamentalist monolith have been detectable for several months -- dating back to last June, when the Southern Baptist Convention surprisingly elected the Rev. Frank Page, a new and less confrontational president, over two more outspokenly right-wing rivals. While described by one moderate Baptist scholar as a victory for "the right over the far right," Page's election suggested that some of the faithful have grown weary of the constant ideological hectoring of the nation's most politicized religious leaders. Meanwhile, the crises of global warming, world poverty and AIDS in Africa have created space for a broader evangelical response, articulated by Richard Cizik, a vice president of the National Association of Evangelicals, and others who have called on Christians to join the environmental movement.

As moderates and liberals within the churches begin to speak out more freely, the religious-right establishment has faced repeated embarrassments in its long-standing alliance with the Republican Party. The Mark Foley scandal exploded the myth of a "godly" and caring congressional leadership and aroused suspicions that the gay-bashing rhetoric of the GOP just might be more cynical than sincere. The heavily publicized release of "Tempting Faith" by former White House staffer David Kuo, in which he confides that the most powerful figures in the Bush administration are less pious than advertised, less concerned with Christian compassion than with partisan politics and privately inclined to mock the likes of Pat Robertson and Jerry Falwell as "insane" and "ridiculous." Kuo is urging his fellow conservative Christians to take a "fast" from politics.

If millions of conservative Christians stay home on Election Day, refusing to resist a Democratic deluge, then liberals may be tempted to think the voting cohort that has sustained Republican power for more than two decades is disintegrating. Although the political shifts among evangelicals should be encouraging to progressives, that would be a premature, naive and risky conclusion.

Such euphoria is understandable at a moment when the Washington Times publishes the front-page headline "Conservative Voters Likely to Stay Home," with a worried official of the Family Research Council explaining that "a lot of people are sick and tired of thinking the only reason for going to the polls is to vote for the Republicans because they are lesser of two evils." But dissatisfaction among conservative evangelicals -- or among conservatives in general for that matter -- is nothing new in the Republican Party.

Newspaper archives are full of election-year stories about peevish pastors complaining that their priorities have been neglected and warning that they may not be able to motivate their folks to vote. While there is always something on the agenda that the president, Congress and the party leaders have failed to accomplish, the deeper truth is that the present Republican power structure has pandered to the religious right like no government since the Puritans ran New England.

From the first weeks of Bush's presidency, when they exercised a veto over the appointment of the attorney general, to the past year, when they rejected Harriet Miers and approved not one but two nominations to the Supreme Court, the religious rightists have flexed unprecedented power in Washington. They control the GOP agenda that endorses constitutional amendments to ban abortion and gay marriage. They control the congressional leadership that jumped at their command to pass the extraordinary (and unconstitutional) Terri Schiavo statute. They control the increasingly sectarian rhetoric of party leaders, who publicly pay homage to their "Christian nationalist" ideology. And they control a vast patronage apparatus, from judicial and agency appointments to "faith-based" federal funding worth hundreds of millions of dollars.

That may be why James Dobson, who heads the huge Focus on the Family empire, is so determined to preserve the Republican congressional majorities this year. Only a few years ago, Dobson showed up on the front page of the New York Times, whining that Karl Rove had taken advantage of the evangelicals. Now he is concocting excuses for Dennis Hastert's mishandling of the Foley affair.

The leaders of the religious right don't care whether White House hacks love them or laugh at them, because they see themselves as the users, not the used. Winning power in the Republican Party represents the work of more than two decades for Robertson, Falwell, Dobson, their ultraright comrades and the new leaders, such as Tony Perkins and Rod Parsley, who will eventually succeed them. Their radical goal is an America under the dominion of men like themselves, and the Republican Party will continue to be the most plausible vehicle for their movement. They may lose ground this year -- but they will most certainly be back with renewed determination in 2008.