Hugh Jackman and Christian Bale star as rival magicians trying to out-trick each other in this tediously clever film. 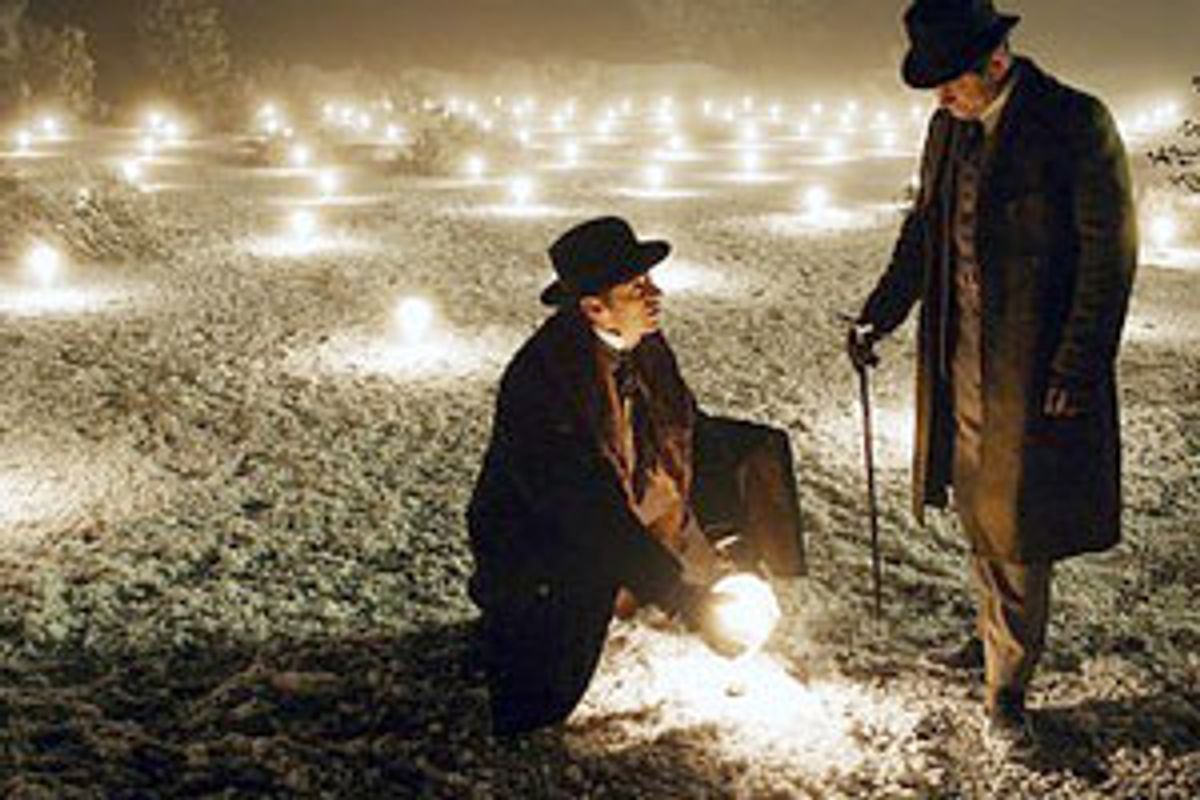 For Christopher Nolan, darkness seems to equal depth -- when, really, sometimes darkness is just a big hole. "The Prestige" tells the story of two rival magicians in Victorian England, the elegant showman Robert Angier (Hugh Jackman) and the less polished but brainier Alfred Borden (Christian Bale). The two begin as peers and wind up bitter enemies: A trick that goes tragically awry sets off a game of one-upmanship that, as we're shown in one of the movie's early sequences, will end in one man's death.

Of course, we only think we know what we're seeing: That's what sleight of hand is all about. And for the first hour, at least, "The Prestige" -- which was adapted from the novel by Christopher Priest -- keeps you guessing where it's going to go next, wondering what it is you're not seeing that might be the key to the interlocking mysteries laid before us. The movie's first line -- we hear the words "Are you watching closely?" over a seemingly static shot of a bunch of gentleman's top hats in the forest -- is both a challenge and a taunt. What can those top hats possibly mean? Even as we scrutinize them, we know there's something crucial we're not seeing, and Nolan has given us our mandate to find out. At that point, the movie and the mysteries within it spread delectably before us.

The problem is that they spread. And spread. In its first half, "The Prestige" works as a clever diversion, a darkly glittering, if mechanical, showpiece. Nolan co-wrote the script with his brother, Jonathan Nolan (the two also collaborated on the 2001 tih -- that's hit spelled backward -- "Memento"). It's easy to see why they'd be attracted to this material, not just for its magnificent plot-twist potential, but because the tortured manhood of the two main characters offers lots of opportunities for brooding dialogue and moody visuals. (Christopher Nolan discusses the film with Salon's Andrew O'Hehir here.) Often, the visuals work. The picture was shot by frequent Nolan collaborator Wally Pfister; it has a somber, classy glow -- this is the look of a world that's just awakening to the possibilities of electricity. (And electricity, as you might be able to guess if you peek at the movie's cast and realize that David Bowie appears as electromagnetism pioneer Nikola Tesla, figures prominently in the plot.)

But "The Prestige" falls far too short in the brooding department, and it's not that its two lead actors -- and the supporting actors around them -- don't try hard enough. Borden is driven by the desire to develop a trick that can't be topped by anyone else; Angier, unable to resist a schoolyard challenge, wants to beat him every step of the way. Their rabid desire to top one another, to guess each other's secrets, results in several injuries and one smooshed dove. The darkness in each of their souls -- intensified by their dueling dual natures -- is supposed to be a terrible thing to behold.

But in actuality? Not so much. Bale and Jackman, two very gifted actors, seem a bit lost among the ever-mounting plot mechanics. Jackman's elegant bearing suits his character perfectly, and the physicality of his performance is a pleasure to watch. But he gets saddled with the movie's deadliest voice-over dialogue ("February 8, 1899. Today, finally, a breakthrough. Tesla has agreed to see me"), and he almost can't survive it. Bale, in a slightly smaller role, fares better: He doesn't have to grind away to reveal the nuances of his character; both Borden's sadness and his shadowy, menacing edge have a way of creeping into the corners of his smile. (As his long-suffering wife, Sarah, the young actress Rebecca Hall makes the most of a tough role: Her fragility has an earthy, vital quality that makes it all the more believable.)

Michael Caine plays Cutter, Angier's right-hand man and "ingénieur" (that is, the guy who helps develop the tricks and builds the mechanisms that make them work), and the picture seems to breathe more naturally when he's in it. Scarlett Johansson is Olivia, Angier's shapely, saucy assistant, who slips into the vortex of the men's spiraling feud and gets lost there. Ricky Jay has a tiny role as a stage magician, and also, as he did on this year's other, more effective movie about magic and magicians, "The Illusionist," served as magic consultant. Anyone who makes a movie about magicians is right to call Jay. But I wish more directors would use him as an actor: He's an unusual, magnetic presence -- he seems to send molecules of air vibrating around him -- and this movie, in particular, could use more of him.

If you were to look at the magician's blueprint behind "The Prestige," you'd wonder how the movie could possibly go wrong: The combination of two troubled guys who gotta figure stuff out and a complicated brainteaser, together in one movie, should prove irresistible. But that right there is the problem with unexpected turns: After a while, anticipating those turns (Look! He's turned himself into a monkey! No, wait -- he's not really a monkey, but a pony! Oh my God, I can't believe I fell for that -- he's really a dentist from Peoria! How could I not have seen it coming?) becomes tedium itself. By the time we're hit with the movie's "prestige" -- which, as Caine's character explains, is the third and final act of a magic trick, "the part with the twists and turns, where lives hang in the balance, and you see something shocking you've never seen before" -- Nolan has led us down so many mirrored hallways that it hardly matters anymore. "The Prestige" is a trick box with too many false bottoms. Ultimately, the last one simply gives way -- leaving us with a hole, and a little residual darkness, but not much else.