If you like "The Wire," delve into books by Robert Ward, John Waters and William Manchester to experience more avenues of Charm City. 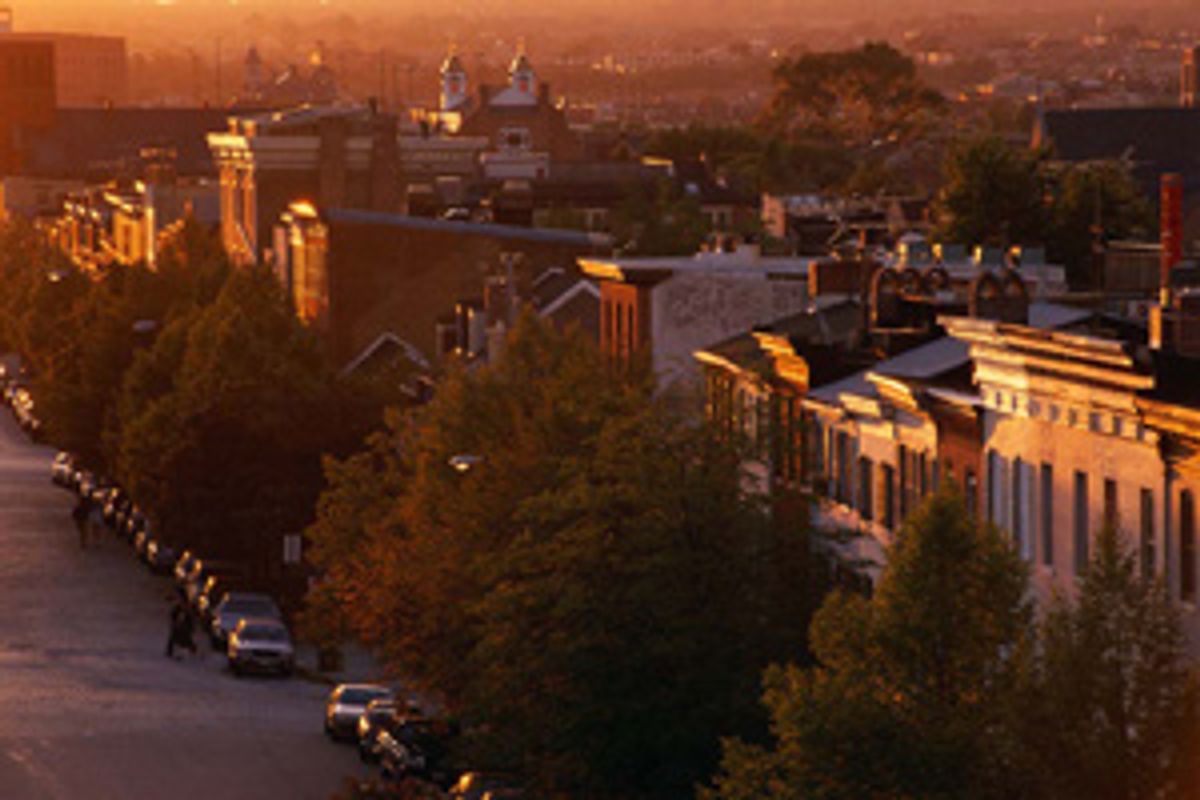 To understand Baltimore, it's helpful to get a grip on its geography. Baltimore is one of those odd American cities that lies in no county; instead, it dangles in the water, surrounded by a ragged blob of land. It has been said that Baltimore County looks like a monkey wrench hanging from the Mason-Dixon Line, which makes Baltimore City the bolt -- one that has been tightened a hair too much. Incapable of expanding, the city has been losing population and political clout since the 1960s, when white residents began to flee for the suburbs. Fittingly, all quintessentially Baltimore stories have a "Wizard of Oz" quality: Characters dream of escaping to someplace new, only to yearn for home. Or, as we say in Bawlmer: Hooooooohme.

In Robert Ward's "Red Baker" (1985), for example, the novel's recently laid-off, eponymous steelworker tells us: "There never was a story with a happy ending in Baltimore," yet opines later: "Even the worst of times aren't all that bad." But Red was conceived by Ward in the early 1980s. He probably couldn't envision a day when his company's real-life counterpart, Bethlehem Steel, would be bought by other companies, which would then cut off retirees' health benefits. Baltimore reveres its working-class past, but it doesn't have as much affection for the actual workers still among us. Thankfully, Red ultimately finds contentment -- not in Baltimore, but in a desert, the perfect diametric for a polluted mid-Atlantic city where the snow is so lumpy that Red compares it to grits. (Ward, who was nominated for the National Book Award for "Red Baker," made a similar journey, heading west to write for television -- "Hill Street Blues," "Miami Vice" -- while keeping his hand in as a novelist.)

John Waters isn't a character like Red -- well, let me rephrase that. Waters, the well-known film director, isn't the figment of someone else's imagination, but he's quite the character and a terrific writer to boot. His memoir, "Shock Value" (1981), is a wonderful story about a self-confessed odd duck growing up in the suburbs, obsessed with the city's seamier side. (Yes, Russell Baker's "Growing Up" (1982) is a terrific memoir, too, but its Depression-era setting is almost too universal to count as a Baltimore tale.) At one point, Waters counsels the powers-that-be to change the city's slogan to "Come to Baltimore and Be Shocked" -- and the Chamber of Commerce actually complied in 2000, printing up thousands of yellow-and pink bumper stickers as a tribute to Waters. His essays, collected in "Crackpot" (1986), also have their share of Baltimore moments, most notably "Ladies and Gentlemen ... the Nicest Kids in Town," a completely sincere paean to a local dance show. That piece evolved into "Hairspray," the low-budget film, which became "Hairspray," the Broadway phenomenon, which is now "Hairspray," a motion picture so major that it can't even be filmed in Baltimore.

I know that Anne Tyler is, for most of America, the first name in Baltimore fiction, but I'm almost reluctant to include her here. Tyler, like Baker, transcends Baltimore, although she does the gentle lunacy of the WASPy North Side precincts very well, particularly in "The Accidental Tourist" (1985). Still, I've always maintained that Tyler isn't a Baltimore writer, but a great writer who happens to live in Baltimore. Charm City is not her primary subject, but her default setting. Tyler would be an astute and perceptive writer in Minnesota, where she was born, or North Carolina, where she graduated from college.

Besides, I've always been a little uncomfortable with locals' panting eagerness to claim Tyler, whose fictional world flatters us so. Baltimore tends to romanticize its past (white, working-class) while ignoring its present, where Johns Hopkins is the city's largest private employer and the population is two-thirds African-American. Where is the great novel about Baltimore's black middle class? To my knowledge, it hasn't been written yet. But as far as nonfiction goes, "The Corner: A Year in the Life of an Inner-City Neighborhood" (1997), by David Simon and Edward Burns, nails the city's underclass, pretty much to everyone's discomfiture. Looking for the working class? Turns out that dope fiends are the hardest-working people in Baltimore, while the city's drug dealers run far more ruthless meritocracies than any legitimate businessman. Simon and Burns have carried these themes into "The Wire," the critically acclaimed HBO show that the city establishment would love to disavow. Madison Smartt Bell tilled the same territory for a novel, the nicely understated "Ten Indians" (1996), which examines the tyranny of good intentions. A white psychologist opens a martial arts studio in a poor black neighborhood, and it ain't "The Karate Kid." Bell has the courage to remind his readers that it's pretty damn hard to save anyone, yourself included.

(In the interest of full disclosure, Simon is my longtime significant other, and Bell hired me to teach in Goucher College's creative writing program. But that's the thing about Baltimore: It's small, the smallest city of 630,000 that anyone could imagine. With one exception -- Tyler -- I've met every writer mentioned in this piece. And I could have made Tyler's acquaintance just a few weeks ago, if I had been willing to interrupt her meal at a local tapas place.)

William Manchester's "City of Anger" has the inevitable anachronisms of any 1953 novel that takes on race relations, but the title remains depressingly apt. Manchester, who worked for the Evening Sun (my former employer as well), begins with one of the best descriptions I've ever read of my hometown: "The city faced the bay. In the days of sailing vessels all the people had lived in a horseshoe of homes circling the downtown basin, and everyone could see the water, and the land behind was wild. Now the skyline blocked out the bay, and those who could had moved inland and built in the green corridor of the Valley. But the horseshoe remained, a vast arc of decaying houses running from sea to sea, walling the skyline in and the suburbs out."

The area around the harbor is the opposite of decaying these days, but it is more walled in than ever, ringed by expensive condos and glitzy hotels. Baltimore has fallen hard for the siren song of Richard Florida, the city planning theorist who encourages the development of bike paths and wine bars and jazz clubs -- in part because they attract childless homesteaders who are willing to overlook a rotten school system, a much harder fix. I know it's good for the city's tax base, but there are some awfully long shadows in once residential neighborhoods, creating urban canyons that look more like suburban office parks than the Baltimore of my youth. Like Red Baker, I realize that even the worst of times aren't all bad, but I only recently began to understand that the good times wouldn't be all good. Ah, but there I go again, being a Baltimorean, succumbing to the disease of nostalgia. Johnny U and the Colts! Them marble steps! That Natty Boh! Fact is, the Colts are in Indianapolis, those marble steps are a bitch to keep clean, and they haven't made National Bohemian beer here for years, although its neon mascot still winks at us from the skyline. I hate him.

Laura Lippman grew up in Baltimore and returned to the city to work for the Evening Sun and, upon that newspaper's folding, The Sun, where she worked until 2001. She edited and contributed to Baltimore Noir, an anthology of stories about the city; her twelfth Baltimore-based crime novel, What the Dead Know, will be published in March. She lives in South Baltimore.

Baltimore Books The Literary Guide To The World