Disgusted with the leadership of the Iraq war, two retired generals say the GOP must go. Plus: More than 100 current military personnel join a campaign to get the U.S. out of Iraq -- now. 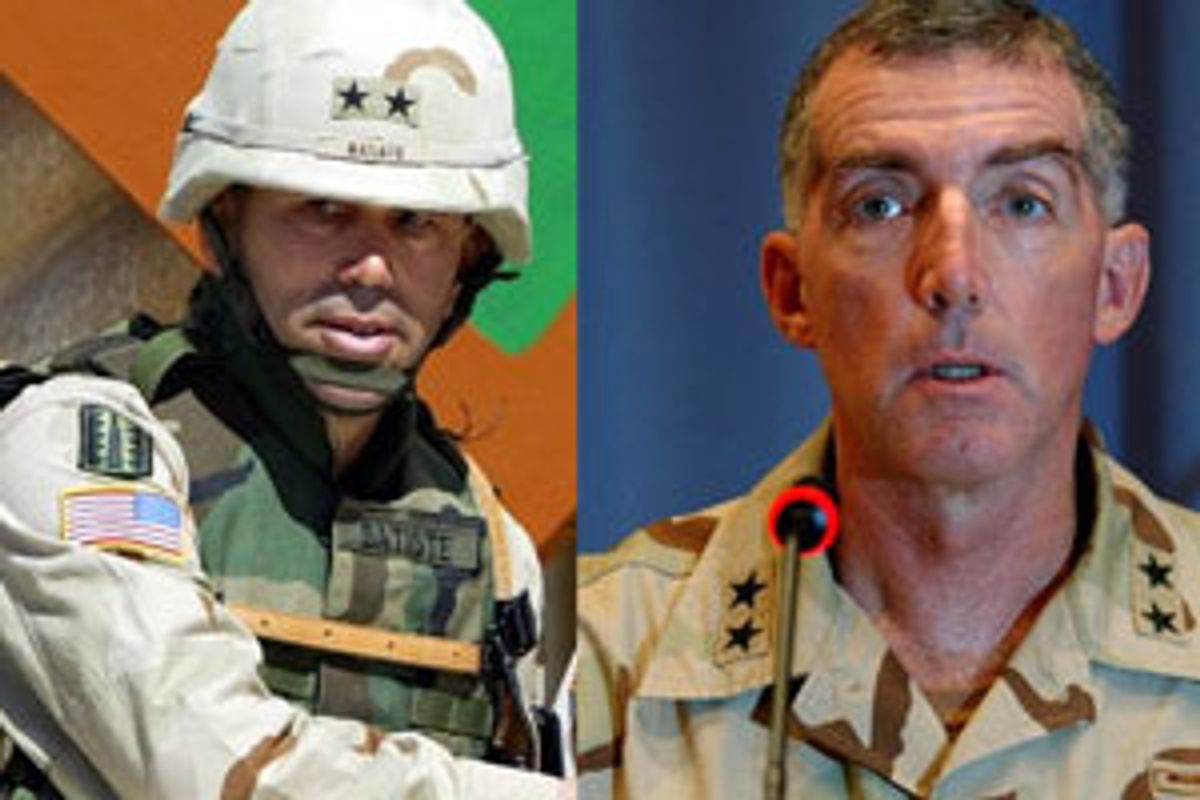 Two retired senior Army generals, who served in Iraq and previously voted Republican, are now openly endorsing a Democratic takeover of Congress. The generals, and an active-duty senior military official, told Salon in separate interviews that they believe a Democratic victory will help reverse course from what they consider to be a disastrous Bush administration policy in Iraq. The two retired generals, Maj. Gen. John Batiste and Maj. Gen. Paul Eaton, first openly criticized the handling of the war last spring, when they called for the resignation of Defense Secretary Donald Rumsfeld.

"The best thing that can happen right now is for one or both of our houses to go Democratic so we can have some oversight," Batiste, who led the Army's 1st Infantry Division in Iraq in 2004 and 2005, told Salon. Batiste describes himself as a "lifelong Republican." But now, he said, "It is time for a change."

Eaton, who was in charge of training the Iraqi military from 2003 to 2004, agrees that Democratic control of Congress could be the best way to wrest control from the Bush administration and steer the United States away from a gravely flawed strategy in Iraq. "The way out that I see is to hand the House and the Senate to the Democrats and get this thing turned around," Eaton explained, adding that such sentiment is growing among retired and active-duty military leaders. "Most of us see two more years of the same if the Republicans stay in power," he said. He also noted, "You could not have tortured me enough to vote for Mr. Kerry or Mr. Gore, but I'm not at all thrilled with who I did vote for."

An active-duty senior military official who also served in Iraq said that, among a surprising number of his otherwise "very conservative" colleagues, there is hope that Democrats will gain control of Congress. "I will tell you, in the circles I talk to, the only way to enable or enact change is to change the leadership," he said.

Political experts say there is no evidence of a large exodus of military voters from the GOP, and it remains unclear how Iraq will affect military voters at the polls. Particularly among officers and the top brass, the military has long been heavily Republican. President Bush led John Kerry 73 percent to 18 percent just prior to the 2004 election in a Military Times poll, which largely surveyed higher ranking and career members of the military. Three separate studies in the past decade, including one due in dissertation form from Columbia University next spring, have put the ratio of Republicans to Democrats in the upper ranks of the military at 8-to-1.

But last spring a handful of retired commanders shook the military establishment to its core by publicly calling for the resignation of Defense Secretary Donald Rumsfeld. And palpable frustration and anger among officers over the Bush administration's Iraq strategy clearly is driving some to do what was previously unthinkable: switch their allegiance to the Democratic Party, at least for the time being.

That may also be the case among the rank and file. As Salon reported recently, there are signs that support for Bush and the GOP is eroding in a Virginia congressional district saturated with military voters. Salon has also learned that more than 100 current members of the military have now joined a campaign formally appealing to Congress to immediately withdraw U.S. forces from Iraq.

"The rest of us still in uniform cannot publicly articulate our own concerns, but there is a whole bunch of people out there who feel [this] way," said the active-duty senior military official. When asked if he was a Republican, he responded, "I was in the past." He railed against the Bush administration's head-in-the-sand approach to the war. "What do we have today? Holy shit. Now you have sectarian violence? That is a new term, by the way," the official fumed, emphasizing that before the war and even well into a volatile occupation nobody in the Bush administration "would even believe there would be an insurgency."

It's not that the current and former military leaders are suddenly eager to see liberal House Democratic leader Rep. Nancy Pelosi take more power in Congress if the Democrats win control. Instead, the embrace of the Democrats, they say, is purely pragmatic. They hope the Democrats will succeed where Republicans failed and conduct critical oversight to help the Bush administration fix its stalled and failing strategy for Iraq. "Over five years our Congress has abrogated [its] oversight responsibilities," Batiste said. "They have not held serious hearings about this war."

The military leaders also say that Democrats might be willing to put up the massive infusion of cash they believe will be required to fix a military stretched thin, and to permanently increase the size of the Army. In July 2005, Sen. Joseph Lieberman and Sen. Hillary Clinton introduced a bill that would boost the Army by 100,000 soldiers. In the House, Pennsylvania's John Murtha and Missouri's Ike Skelton, ranking Democrats in military matters, have also indicated support for a beefed-up military. While the Republican-controlled Congress passed legislation temporarily increasing the size of the Army, a permanent move in that direction is anathema to Rumsfeld -- who has battled for a smaller, ever more technology-dependent military.

The Bush administration's handling of the war, meanwhile, has come under extraordinary fire from within the military. More than 100 service members, including those on active duty and members of the Reserves, have now sent "appeals for redress" to members of Congress asking for the "prompt withdrawal of all American military forces and bases from Iraq." The appeals are a form letter designed to air a complaint without running afoul of official regulations restricting what members of the military can say. Although they are sent individually, the unusual wave of appeals has been organized by antiwar groups including Iraq Veterans Against the War, Military Families Speak Out and Veterans for Peace.

It appears to be one of the first examples of an organized effort by active-duty and reservist military members in opposition to the war in Iraq. It also signals a level of desperation -- since those troops who contacted Congress have potentially invited retribution from their superiors and put their military careers at risk. "It is significant because it is a clear voice from people who are dedicated to the military and dedicated to service, but not dedicated to this war," said J.E. McNeil, the executive director at the Center on Conscience & War who is providing some legal advice to those participating. "For every one of those guys," McNeil claimed, "there are 2,000 or 3,000 guys who are not willing to go public like this. These men and women represent the tip of the iceberg."

Army Lt. Col. Brian Maka, a Pentagon spokesman, said he was unaware of the appeals for redress, and declined to comment further.

A prompt withdrawal of troops, which some Democrats have called for, is not part of the major strategic overhaul sought by Batiste and Eaton. But the retired generals are hoping that a Democratic-controlled Congress can push back more forcefully against President Bush, who continues to argue in favor of establishing democracy in Iraq, and against partitioning the country along sectarian lines. Some in the military say that partitioning the country may now be the only hope of success in some form -- a plan aired publicly by Sen. Joe Biden in May and backed by a number of Democrats.

"It will never be democracy," Batiste said, pointing to the military's several years of experience battling the insurgency in Iraq. Democracy, he said, simply runs counter to the powerful tribal and religious fault lines of Iraqi society. But he thinks that the country might still be successfully carved up among the Shiites, the Sunnis and the Kurds. Sharing oil resources might seal the deal, Batiste said, and it could be spun as "some form of representative government" -- if not a democracy.

"Either partition it into three countries or go into a loose confederation and have assurances on the sharing of natural resources," Eaton agreed. "I think that is the best we can get out of this deal now."

It's too early to tell whether the acute dissatisfaction with Republicans will have staying power, says Stephen Wayne, a professor of government at Georgetown University who has lectured at West Point. But Wayne says it reflects real and widespread disappointment among military officers at the Bush administration's wrongheaded approach. "I think in the short run, you are seeing anger" at the Bush administration, he explained. The uniformed officers "have been completely marginalized" by an administration that refuses to take their advice.

Batiste said he was tormented by reading daily casualty reports and knowing that the deaths are, in part, the result of a bungled, backward strategy that focuses on lofty but unattainable goals. But while he and others admit they have no particular love for the Democrats, they see the party as perhaps their last, best hope of reaping anything other than more death and destruction in Iraq.